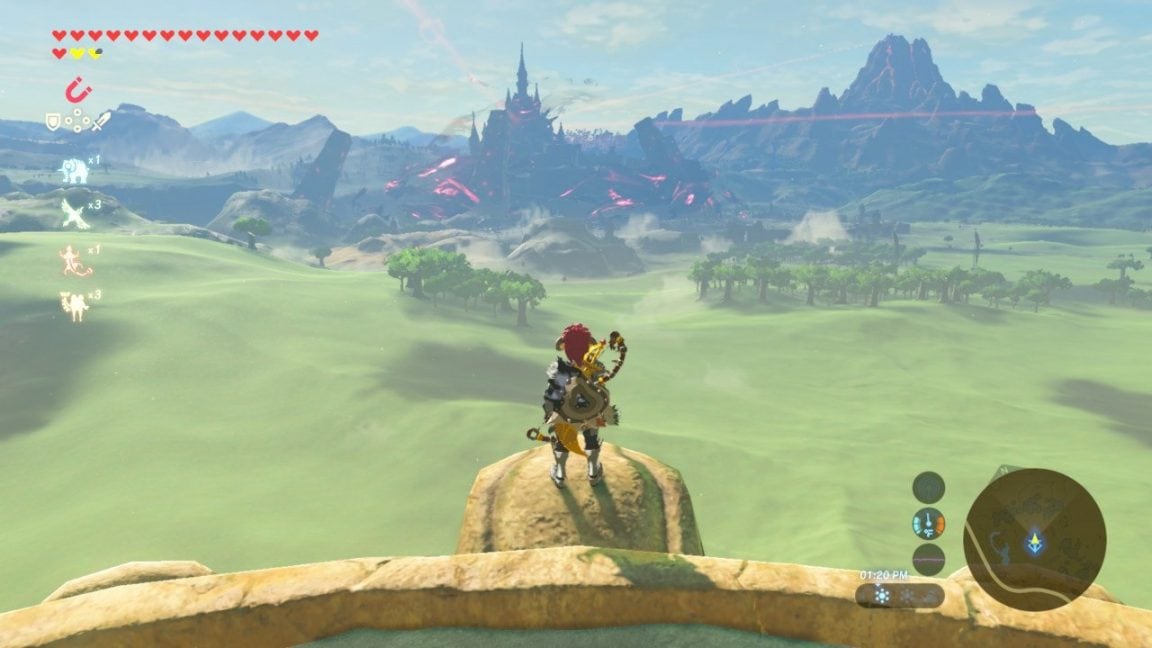 The Legend of Zelda: Breath of the Wild has ensured that Nintendo is back with a bang. But, does it really deserve those perfect 10 ratings?

First off let me say that I have played every single Legend of Zelda game released for each of Nintendo’s home consoles, plus most of the titles for the DS and Gameboy.  I was super excited about Breath of the Wild but was nervous that it might end up being like the last Zelda title, Skyward Sword, which is my least favorite in the franchise.  Fortunately, I was worrying for nothing.

It very quickly became evident that Breath of the Wild has been heavily influenced by the first two Zelda titles on the NES.  The original games basically gave you a sword and pushed you out into the world; forget the hand holding modern games have become accustomed to.  Breath of the Wild introduces you to the world, then leaves you to explore and discover everything on your own.

Breath of the Wild introduces you to the world, then leaves you to explore and discover everything on your own.  What do you do?  What do you do next?  It’s completely up to you.  I really liked this approach – it’s exactly how great open-world games should be played. If you so desired you could go straight to the boss, Ganon, and try to defeat him. Of course, you will most likely lose, but giving you that freedom is a breath of fresh air. Even the four main dungeons can be tackled in any order you want. 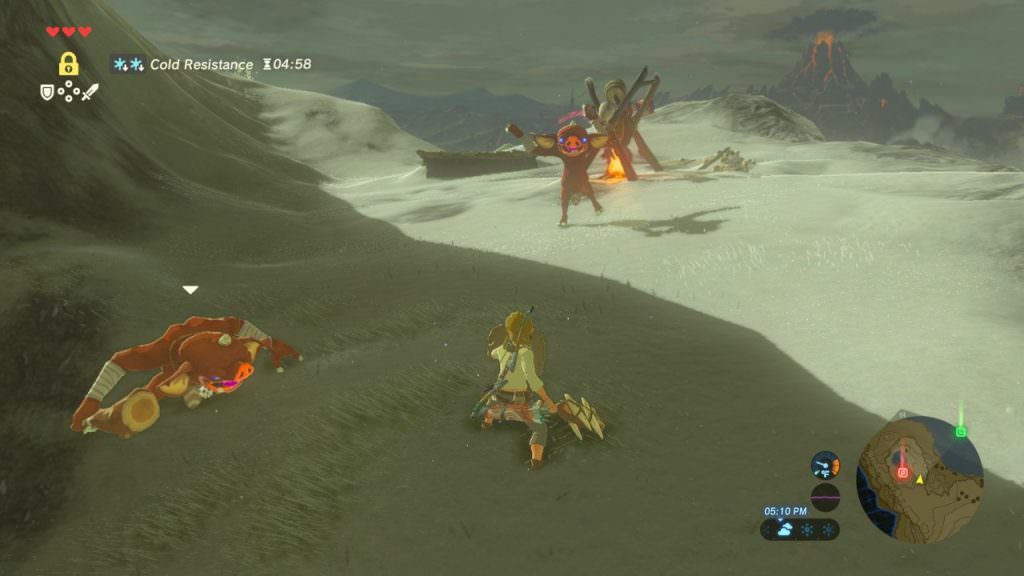 Want to go straight to the boss, Ganon, and try to defeat him?  Go for it – you’ll probably lose but at least it will be on your own terms.  That freedom is a breath of fresh air.  Even the four main dungeons can be tackled in any order you want.

Along with that open freedom, Nintendo allows you to climb anything you want. If you see a mountain you want to explore, go climb it. Link is able to climb anything in the main world map. Only exceptions are the mini-puzzles and four main dungeons, where climbing is limited because Nintendo wants you to solve the puzzles. The other limiting factor here is Link’s Stamina bar, or in this case wheel. Yes, you could climb mountains, but if you don’t have enough stamina to climb that large mountain you will fall to your death. This is where the slight RPG elements come into play, which reminded me of Legend of Zelda II: Links Adventure on the NES.

Link can get stronger in the game by completing the 120 shrines scattered across the map. Shrines are the mini-puzzle dungeons I talked about before. Shrines can be found in the open or they can be hidden from view. Sometimes looking for the shrines can be a puzzle itself. But, once you find one and enter it, it loads into a small dungeon where you solve a puzzle to gain an Orb. The puzzles are not overly drawn out, they are quick and in some cases simple to solve. Of course, you don’t have to find and complete all 120 shrines. As long as you complete at least four shrines you can then trade in the Orbs you gain for a heart container (increasing your health) or for more stamina (allowing you to do actions that cost stamina for longer periods of time). Like I said before, you are free to walk right up to the main boss in the beginning of the game and try to default him, but exploring and finding shrines will help you become better prepared for that main event.

Not only will increasing your health and stamina help you defeat Ganon and the many monsters in the game, but finding armor, weapons, and resources scattered across the world will as well. You can buy or find many different sets of clothing/armor that will defend against physical and elemental damage. The weapons on the other hand, except for a specific few that can be crafted if they break, must be found throughout the world. You can even pick up the weapons of your enemies and use it against them. Weapons are broken down in three groups Bows, one-handed, and two-handed. These will break after many uses, even your shields will break, but there are so many scatter across the world it almost doesn’t matter. It also should be noted that weapons and shields can’t be upgraded like armor. But Armor doesn’t break, which is a good thing as these are costly and harder to find. Not only are you exploring for weapons, shields, and armor, but you are also looking for the many resources in the world. Resources can be anything from mushrooms to berries, meat from animals, and even monster parts and insects. For the first time in Zelda history, you have to create your own potions and health recovering items. Cooking has a major role in Breath of the Wild.

No longer are empty bottles needed to be filled with a health recovery potion or fairies. Recovery hearts are not found in vases or when cutting grass or slaying monsters. To recover health in Breath of the Wild you must cook the many resources you will find throughout the world as you explore. I rather enjoyed the cooking system in this game. No matter what you mix in, you will always cook something that will recover Link’s health. Cooking always produces better results than eating things raw. Unless of course, you cook monster parts into your food. Monster parts and insects are used to create potions. You want to cook food to recover health, and monster parts with insects to bolster your stealth, speed, stamina, defense, or might. Of course, these stat effects can also get produced when cooking food with the right ingredients, but potions make these status effects last longer than food will. 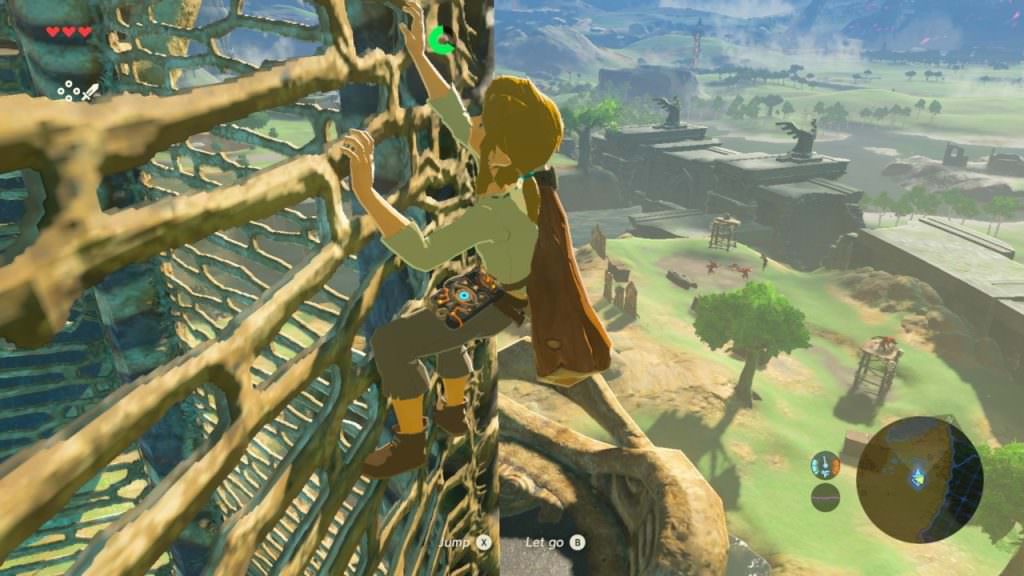 Discovering the combinations of ingredients for cooking was rather fun. I would wonder what would happen if I combine this piece of meat with this mushroom and so on. The only thing I didn’t like about the cooking system was the lack of saving the recipes. You can look at the item you made and see what you used to produce it, but once you ate it the recipe is gone unless you wrote it down. Having this feature in the game would have been cool because I created some awesome things I wish I didn’t have to write down to remember for next time I wanted to make it.

Breath of the Wild’s open world is pretty amazing. It looks great, even with some frame rate drops at times. The freedom to go where you want is awesome, and the freedom to tackle the many monsters how you please is refreshing. Despite all this freedom, the one thing that lacks in this game is the story. It is not bad, it’s just not the dominant feature in this game. It is clear Nintendo focused so much time and energy on the open world that the story fell flat.

The story in Breath of the Wild is told through memories, as you have been sleeping for 100 years. So Link has forgotten everyone he cared about and what happened 100 years before. You are not required to find all the memories, but if you do you will gain the true ending to the game. So as you can see, this freedom can allow you to skip all the memories, which will leave you bare bones when it comes to characters and story elements. Even if you did collect all the memories, the story isn’t the best told in the series. 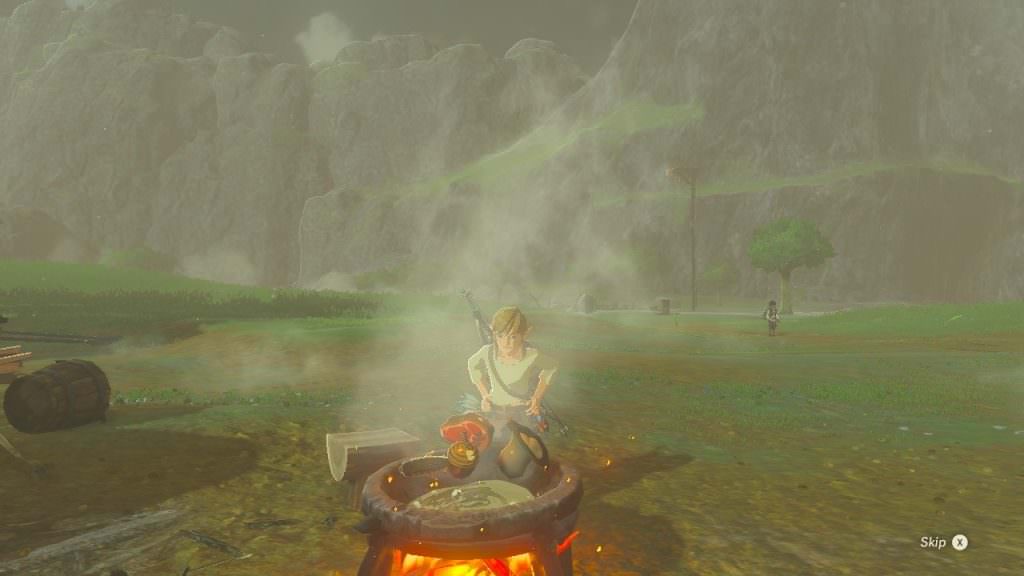 The Legend of Zelda: Breath of the Wild is one amazing game. Nintendo has focused so much time and energy on the open world gameplay and it paid off. It is truly one of the best open world games I have ever played. But it isn’t perfect, weapons break too fast for my liking. It rains a lot which can cause your bomb arrows to not work and makes climbing impossible. The story is lacking and so is character development. And I wish there were more than four major dungeons in the game.

So, to answer my question at the beginning of the article: does it live up to the perfect 10s the media has been giving it?  No, it is not a perfect 10 but damn is it close. I wouldn’t have wanted this game to be perfect. What Nintendo has achieved with Breath of the Wild, is amazing. But there is room for improvement, which means they can build on what they have created here. In my book that is a win-win situation.

Breath of the Wild is a fun, long, epic journey that deserves to be played at least once in your lifetime. It is a must buy in my opinion and a game that should be on your bucket list. Now, if you excuse me there is still much more for me to discover in this game as I plan to beat Ganon a second time.