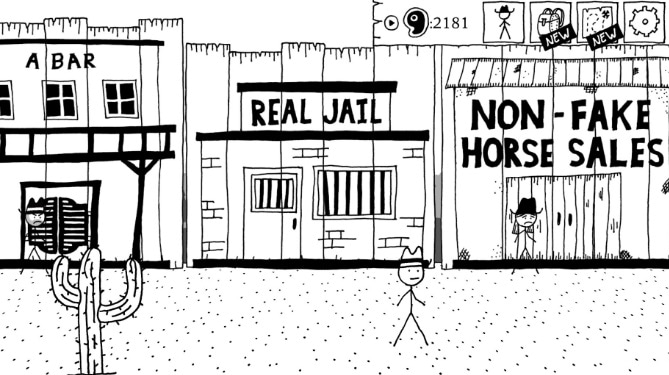 The new South Park game left you with a bad taste in your mouth? This might be the game for you.

If I’m honest, West of Loathing, from the developer Asymmetric, was not what I expected it to be. I knew it was a game that didn’t take itself too seriously, that it had lots of jokes and pop-culture references peppered throughout, but nothing prepared me for this barrel of fun disguised as an 11 dollar game. The trailers most definitely don’t do this game justice.

West of Loathing is a fantastic RPG game, and what it lacks in any real depth, it makes up for with a mind-boggling amount of content and humor. Let’s dive right in! 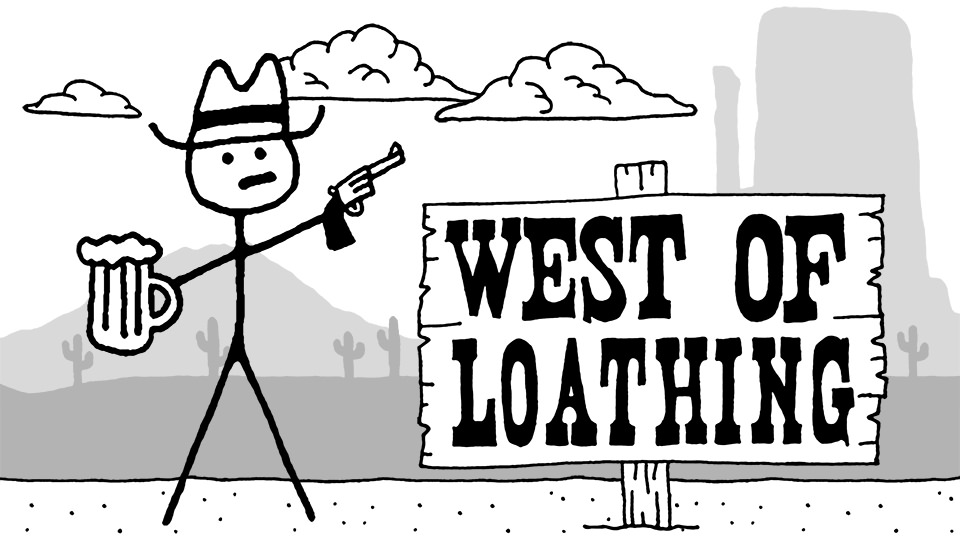 The game is set during the Wild West, so you can already prepare yourself for a whole plethora of spaghetti Western call-backs, references and jokes. Despite the setting, the game doesn’t shy away from poking fun at today’s society and other topics as well. However, if you’re expecting swearing, racist jokes and male genitalia, ala South Park style, then this is anything but that. The humor in WoL ranges all the way from simple dad jokes and puns, to some more absurd humor that you would normally find in a Jim Carrey movie. But despite all that, the humor never seems to fall short, and the game almost always manages to get a chuckle out of you with its genuinely clever jokes.

During the first few minutes of the game, the player gets to choose their gender, name, and one of three available character classes: Cow Puncher (focus on melee and strength), Snake Oiler (focus on potions and firearms) or a Beanslinger (focus on wizardry and the mystical arts). After a brief introduction, which perfectly sets up the mood for the rest of the game, we set off for the West.

In essence, WoL is a side-scrolling RPG game. Players explore a fairly large game world, with a variety of different locations, quests, random encounters, and, of course, enemies. For each completed quest you gain EXP, items, and meat, the latter being the game’s main form of currency. EXP allows you to upgrade your skills and stats. Standard stuff. By interacting with the game world you will often receive different skills that are always beneficial in some way. Got stung by cactus one too many times? Here’s a perk that gives you extra HP. Additionally, some perks will also give you different dialogue options and new ways to solve problems. 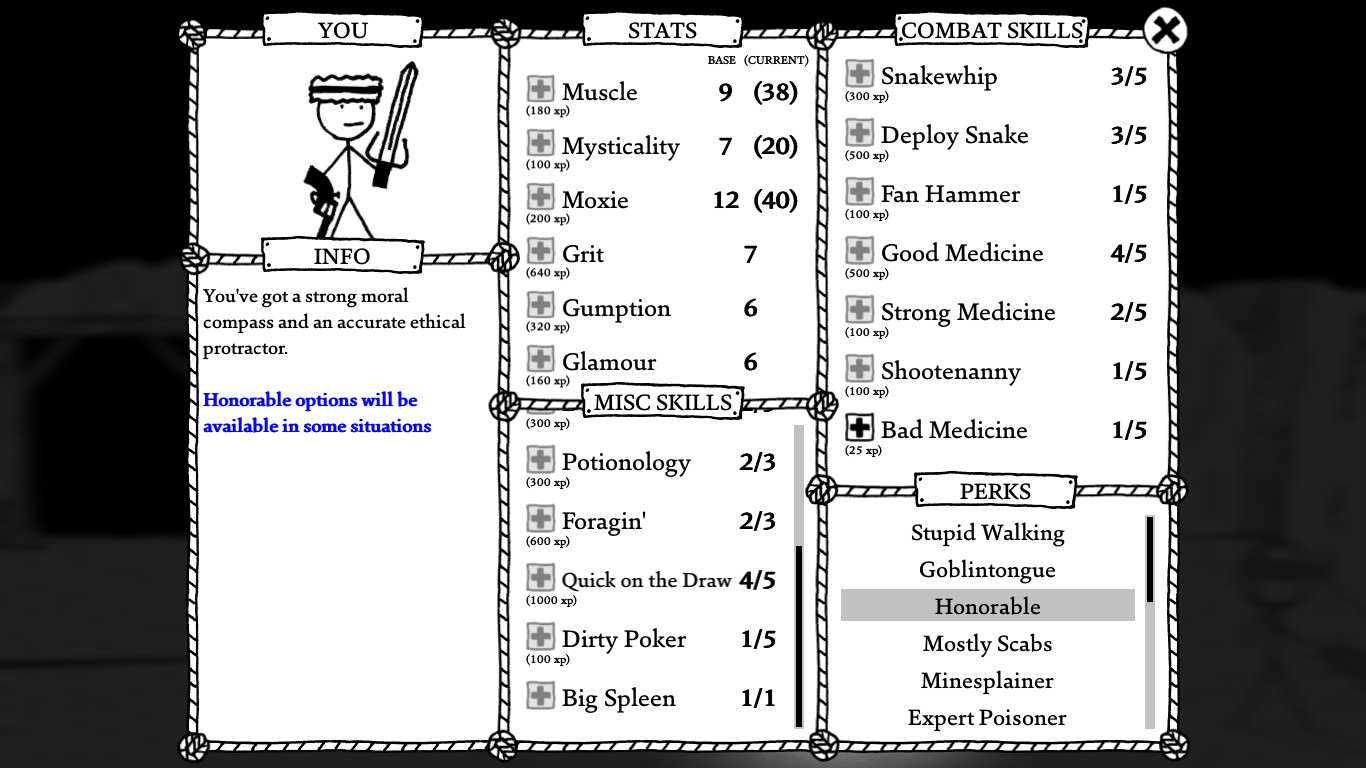 Upgrading your stats very important. If the enemy’s stats are higher than yours, your weapons will do less damage, and we don’t want that, do we?

There is a lot of dialogue in this game. Don’t you dare skip any of it! To quickly skim through it would be akin to missing out on half of the game! If you pick your words right, at times you can avoid combat altogether, and instead resolve things in a different way, resulting in a variety of visual changes in the game world.

Throughout your journey, players will find a large number of items and tools that can be used for additional benefit. See a haystack? Search it, and you will find a needle (but of course) that you can then use to open locked containers for some extra loot. Found a pickaxe? Now you can go and mine meat in a nearby mine. Along the way, you will also collect certain books that, once read, will grant you a skill or a perk of your choosing, which can be very beneficial. 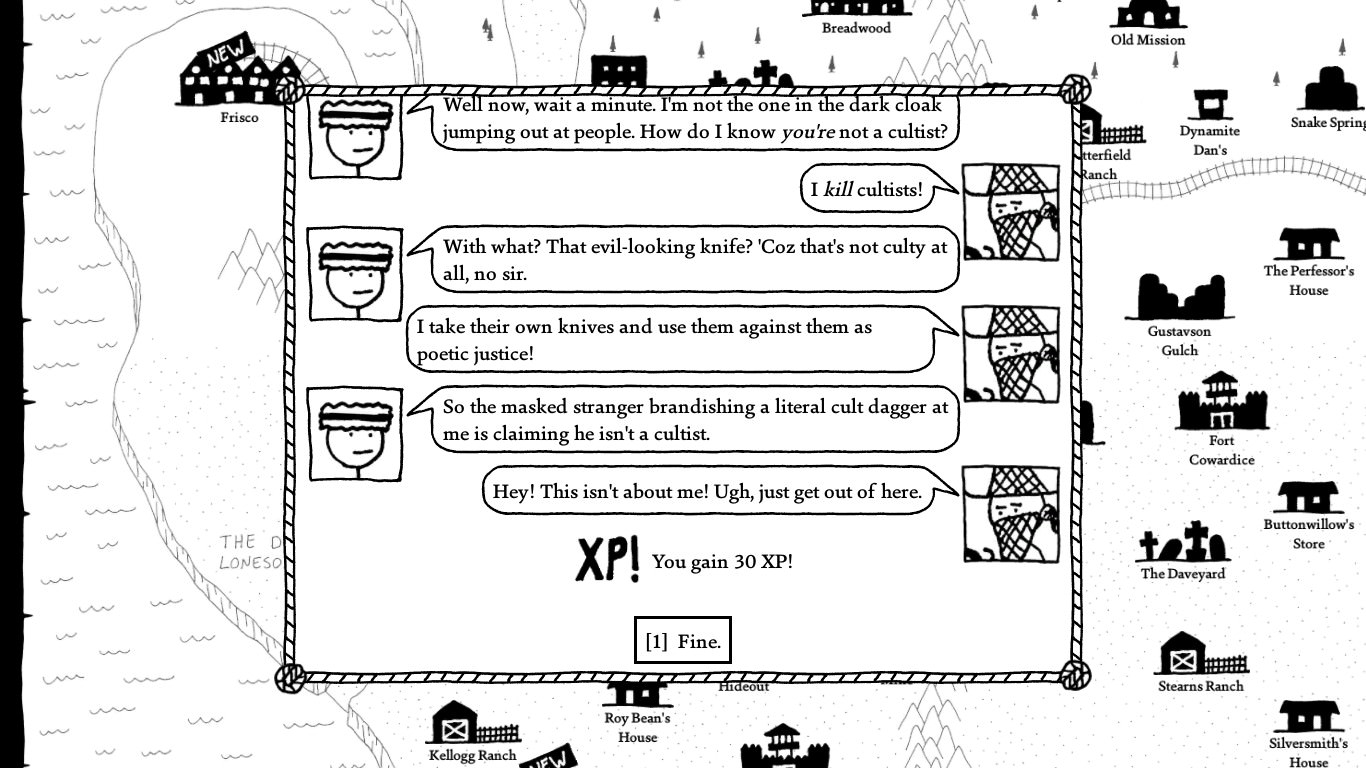 During your travels, there will be a large variety of random encounters with all kinds of characters and locations, which can either lead you to some loot or a good fight.

The combat in WoL is relatively simple, following a turn-based format.  Attacks are determined by action points, and if you have enough, you can use special abilities that will deal much more damage to your opponents. Players can have a maximum of 3 characters in their party. During combat, you are free to use potions and other items without losing action points, which can be helpful at times but can also feel a bit cheap, because one can just spam the enemy with a bunch of TNT, not even giving them a chance to attack once.

While I did notice some rather drastic difficulty spikes here and there, dying in WoL isn’t THAT big of a deal. To be defeated in this game means waking up really angry, which gives you bonuses to different stats, thus making future fights easier. If you get angry more than two times, you will pass out from rage, waking up in the nearest saloon and losing all your current stat-boosts. As I mentioned above, potions and other beverages are really useful in this game. They give you a variety of temporary power-ups, such as higher Speed, which increases your chance of attacking first in a fight, higher amount of Health, allowing you to take more damage, and much more. 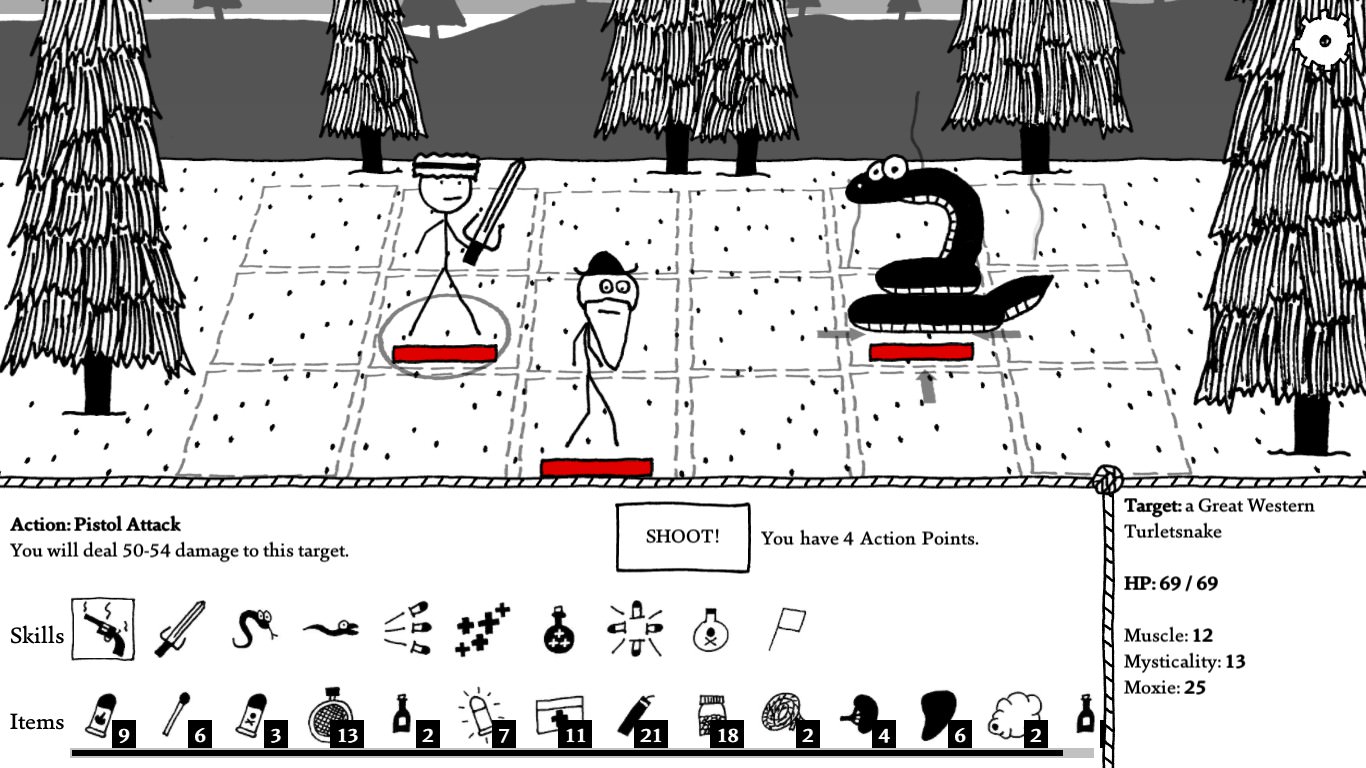 The fights in this game will range from “kind of easy”, to “omg I might die” ones.

This game is obviously no Battlefield 1, so it will easily run on older systems with no technical hiccups. Speaking of graphics – well… it’s black and white. The art style is very charming, with hand-drawn (quite literally in this case) environments and characters, who are portrayed as stick figures. It’s actually quite amazing how much detail the developers have put into the background and the locations. There is even a bit of humor stuffed into the options menu, one such example being a “Colorblind” option. Heh, get it?

You can easily tell what is what just by looking at stuff and the stick figures show a wide variety of emotions through their facial expressions.  There are some cool looking effects present in the game, such as dynamic shadows that move accordingly as you explore a dark cave with your lamp. The animations are all very well done as well, and the amount of effort the developers have put into something as silly as a perk that grants you “Stupid Walking” is nothing short of commendable.

As for the soundtrack, it’s your typical Western-style music, that is, surprisingly nice to listen to. The music tends to repeat, but the few “songs” that are present in the game are good enough and serve well as background music. There are a few surprise “performances” thrown in here and there, which keeps things fresh. 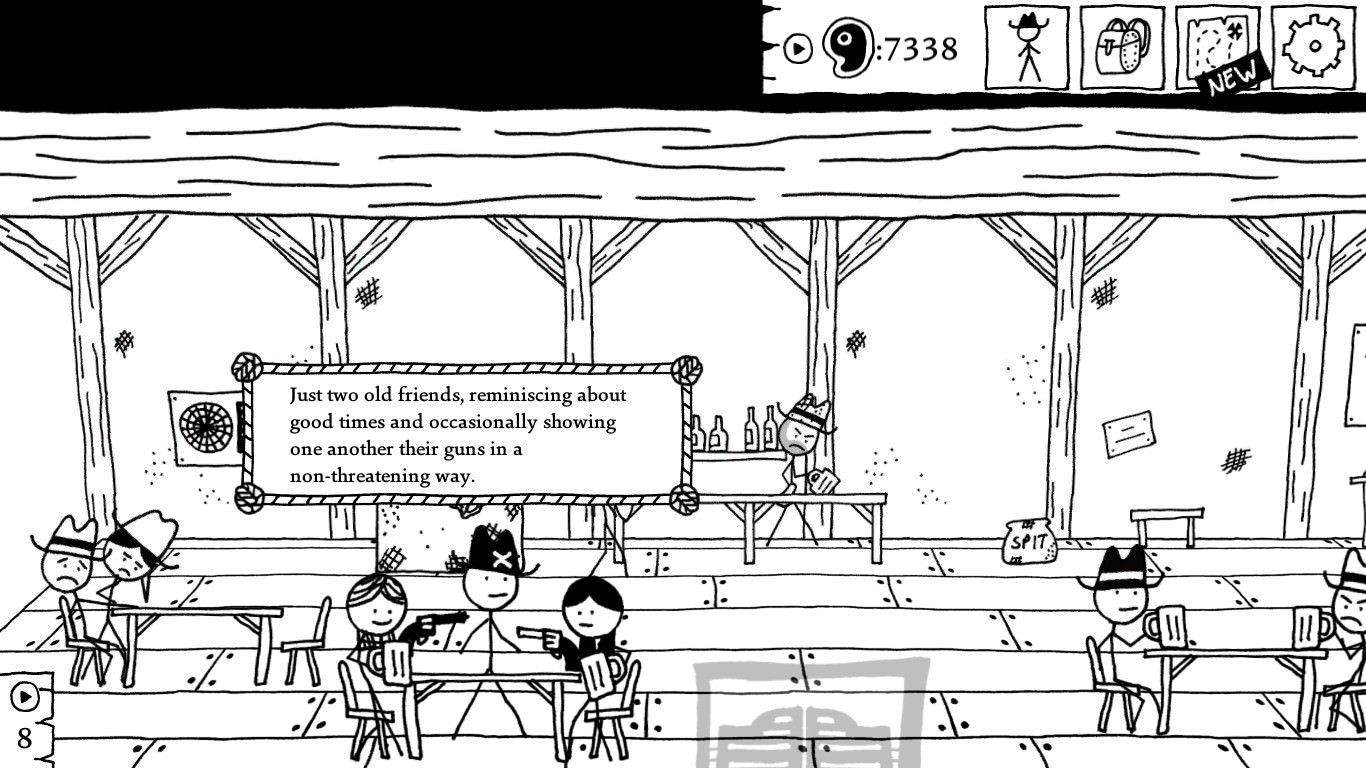 West of Loathing is filled to the brim with characters that you can talk to, and places you can visit.

The game is highly replayable. Not only do you have a large number of companions to choose from, there is always that sense of “I wish I did that before progressing”, or “I wish I did that differently”, that makes you want to replay the game and discover all the nooks and crannies you missed. Replaying the game with a different class is also a great idea, because you will now have new abilities and perks to unlock, plus the combat will change in different ways, as well.

As far as negatives go, there is really not much to say here. The combat is, indeed, very simple and may feel bare-bones at times, with fights ending almost as soon as they begin. While the side quests are great and the progression feels natural, the main quest-line seems more like an excuse to unlock new areas for the player. A branching narrative or simply a more varied main quest-line would have easily lifted the game up.

West of Loathing is a game that you have to try out, even if you’re not a fan of RPG games. It’s a surprisingly fun, content-heavy game that will make you chuckle even when you’re at your worst. And for the price of 11 dollars, you it would be a crime to miss this one out. Highly recommended. The game is currently available for the PC, Mac, and Nintendo Switch platforms.