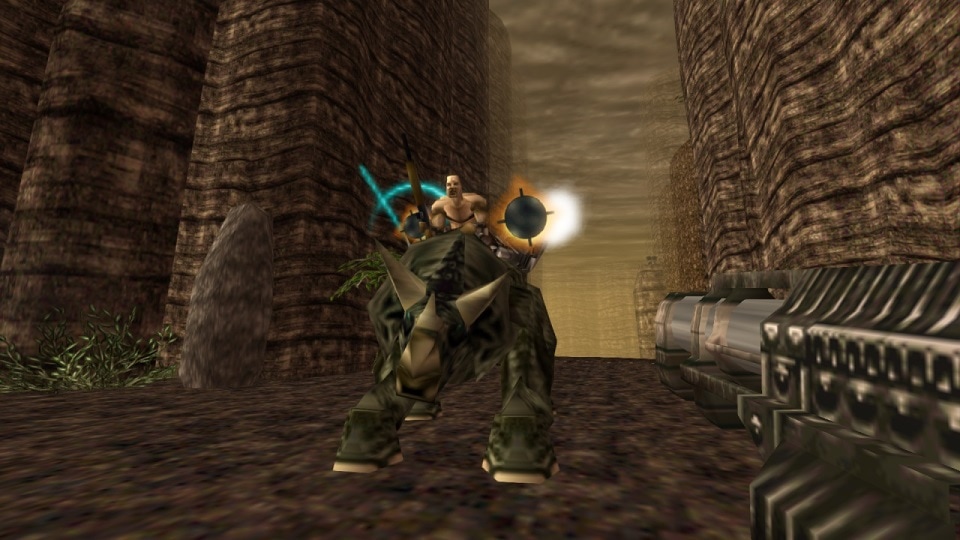 Upon hearing the news that Turok: Dinosaur Hunter was coming to the Nintendo Switch I was very quick off the mark to find out when it was set for release.  It became obvious instantly that the game was ready to drop. I was excited by this news as Turok was, and still is, one of my favourite N64 titles.

The game itself cashes out at £15.95 on the Nintendo eShop and I am fairly satisfied with the price point here as Nintendo have made some strange decisions regarding pricing of games in recent months.

Upon initial inspection of the game, if you have played the original you will note that the heavy mist used to offset the poor graphical capabilities of the N64 is now almost completely gone. The draw distance has been increased by a huge margin in comparison and this is definitely something that makes the switch version very enjoyable when compared to the original.

The game runs smoothly and the traversal, after an initial acclimation, is actually very responsive. It feels like you are in an extremely fast and agile go kart. You may be thinking that sounds terrible but in truth, it is actually a lot of fun. The gunplay is excellent for a title of this age, with the only let down being that you cannot aim your weapon in the traditional sense. It’s all hip action here. Of course, at the start of my play through I reached for the aim button but to no avail. In all honesty, it is a disappointment but not one that ruined my experience. You learn very quickly how to aim the weapons efficiently and dispatching bad guys and dinosaurs is as pleasing as it was all those years ago.

The game, as mentioned, is fast and this, in my opinion, is a good thing because it makes the game frenetic and fun.

Stopping to smell the roses is not something you want to do here. Apart from getting killed fairly quickly if you do, you will notice that the texture maps and general aesthetic of surfaces / enemies are fairly poor. When played at the pace you don’t really have time to notice this but it is more evident if you choose to take a leisurely stroll around the jungle.

Overall I’d say they have performed a stellar job porting this title from the N64/PC version from all those years ago. It really is a very fun and fast gaming experience.

Before writing this review I even cranked up my old dust laden N64 for a test run. The nostalgia was palpable but the one thing that is definitely been updated is the control system. The Switch version brings it into the the modern era and really is exactly what you would expect it to be in this current age of gaming. The controls just feel right and mean that you are never hunting for the button that used to be on the N64 trident shaped pad.

The sound in this game is good but by today’s standard is not really up to par. The weapon sounds are decent without being excellent. There are no echo or sound reverberations that we have come to expect (spoiled really) in today’s FPS games. The sounds are very generic, one sound for each weapon that never changes and this is the same with enemies. It doesn’t break the immersion or enjoyment but it is noticeable if you have played any sort of modern FPS. 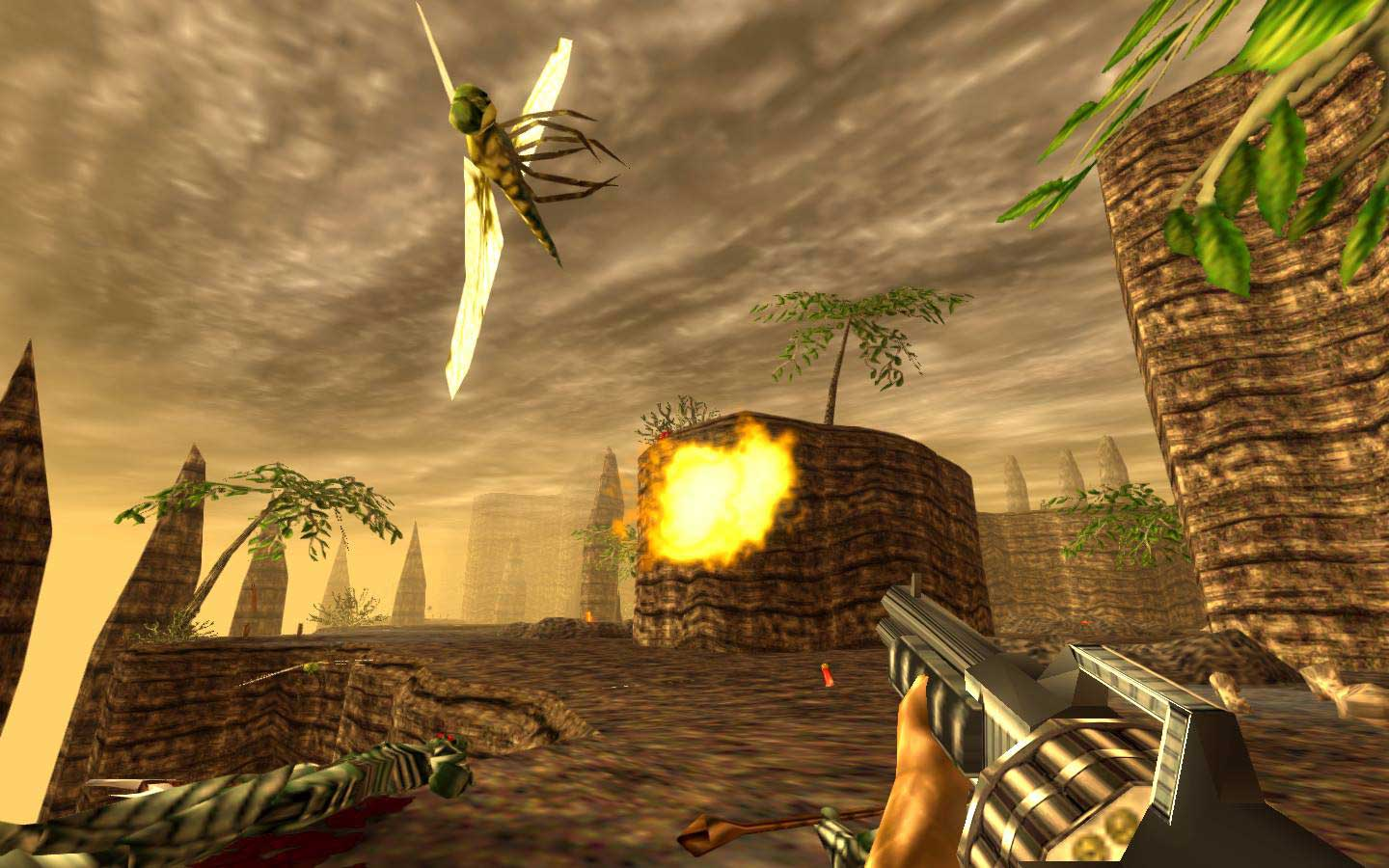 The music in Turok is exactly what you would expect and also what it needs to be in my opinion. Due to the fast paced nature of the game, the soundtrack lends itself to that frantic nature. Gone is the adaptive sound scapes of today’s games (Spiderman Ps4 is an “amazing” example of this) and in is the very apt sounding Indian war drums. If you have ever seen a western movie that has American Indians in it you will know exactly the type of fast paced drum work I am talking about. It is that type of music that is then laden with an almost techno undertone that really suits this game perfectly. The speedy thump of the drums give the impression YOU are on a hunt. I loved it and is something that I do remember fondly from my time with the original game.

In terms of narrative, it is a little thin on the ground. There is of course a premise and some cut scenes through the game but it breaks down as follows. You assume control of Tal’Set (Turok), a Native American time travelling protector. Turok is charged with protecting the barrier between Earth and the Lost Land. An evil overlord known as the Campaigner seeks an ancient artifact known as the Chronoscepter, a weapon so powerful that it was broken into pieces to prevent it from falling into the wrong hands. Turok vows to find the Chronoscepter’s eight pieces (since he clearly can be trusted with the MOST powerful weapon in the universe) and prevent the Campaigner’s schemes (Wiki excerpt).

So basically, a bad dude wants a really bad weapon and you are gonna stop his strangely named ass.

As I mentioned before, there is nothing groundbreaking here in terms of story. On the other hand, if you haven’t already worked it out, you don’t play Turok for the story element. The action content is where the fun lies.

I ended my last thought with the word fun and this game has it by the bucket load. To be honest, I enjoyed it more than I imagined I would. It could be down to the vast improvements they have made in terms of graphics, fluidity, optimizations and controls but overall the game was, in my opinion, previously excellent on the N64 and now with the upgrades, it falls into that same category.

For the money, Turok is 100% a worthwhile purchase and is the most fun I’ve had with a FPS since ID software recent Doom remake. Another benefit of the switch port is that it can , of course, be played docked on a flat screen TV or handheld. I tried out both ways and handheld suited me best, especially with a set of earphones. The hyper thumping American indian drum beat and the desire to get hunting meant there is a whole heap of fun to be had here when you are fully immersed in the gameplay.

I would attribute the following ratings to Turok (Nintendo Switch Edition):

If you are looking for a fairly cheap FPS on the switch then this is definitely the game for you. It is not the easiest game as you progress through the levels but the fast pace and awesome gameplay mean you very rarely get frustrated to the point of rage quit. I spent around 10 hours with Turok and will definitely go back to it from time to time.