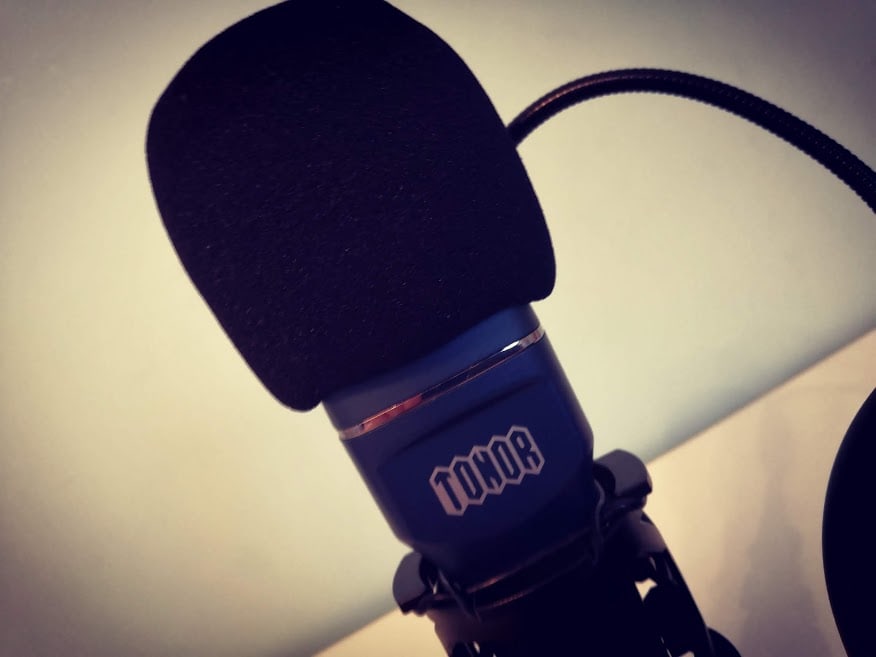 It seems like everyone and their dog is streaming their video games these days. Thanks in part due to coronavirus restrictions and lockdowns keeping friends and families apart, and also due to how simple it is to set up a Twitch or YouTube account, many gamers have decided that there is no better time to try and grow a following, and possibly even an income, by streaming.

As accessible as streaming is, you still need a handful of core components. A computer or console, a microphone, fast and reliable internet, and games. There is a plethora of options available on the market for each of these required elements, with pricing as varied as the options available.

When it comes to a microphone, you really want a condenser microphone, which is ideal for getting rich and detailed vocals. They are commonly found in recording studios to capture the vocals of voice actors, singers and rappers, and more recently they have found a home in front of many of your favourite Twitch streamers and YouTubers.

Microphone prices vary from literally the price of a coffee, up into the thousands. You can get a cheap condenser microphone, but…should you? We’re going to try to find out.

We’ve been provided with the Tonor TC-777 microphone for review purposes. This is very much at the budget end of the spectrum, costing £34.99 on Amazon. Admittedly, I was sceptical going in, as my only experience with condenser microphones is with Shure microphones that I used in a previous life – microphones that cost ten times the price of this one. In my mind, a cheap product can either be a bargain or a waste of money.

The Tonor TC-777 microphone comes with everything that you need right out of the box. There is the microphone itself, which comes with a hardwired USB cable ready to plug into your computer. The microphone sports a blue and grey paint and looks pleasant enough but won’t be the centrepiece to any gaming setup. It doesn’t feel like a premium microphone, but it doesn’t feel like it would break into pieces the first time it was knocked over. 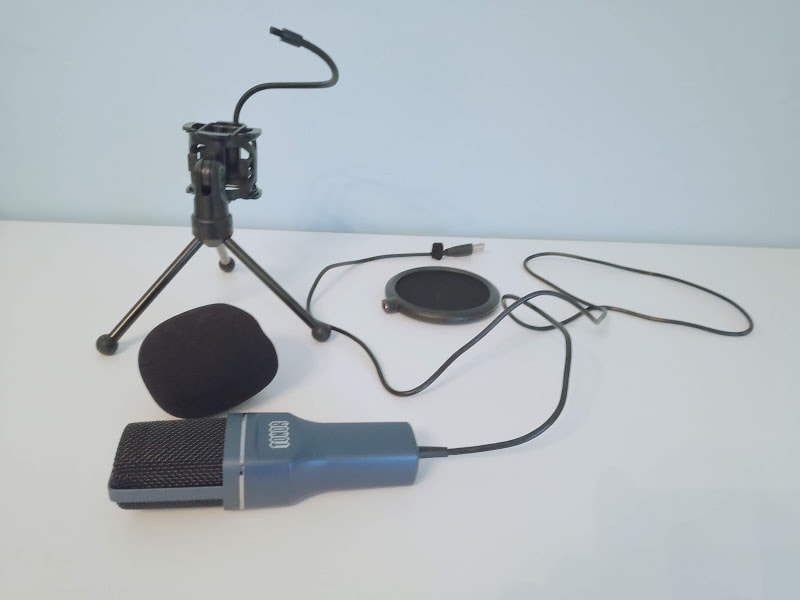 Also in the box is a suitably sturdy tripod stand and a pop-shield to eliminate harsh vocal sounds. For the price, I wasn’t expecting to have literally everything I would need to get started and thought I might at the very least need to dig out some of my dusty pop shields.

Everything pieces together easily and I was able to find a decent position for the microphone while I used it. With that being said, more serious streamers should consider picking up an additional boom stand so that you can position the microphone in a better position, as the low profile of the bundled stand restricted where it could be placed and also where I could be sat.

On plugging the microphone in, my computer automatically installed the required drivers and it was easy to find it in Discord.

So the Tonor TC-777 microphone has everything you need to use it immediately and is quick to set up – but how does it perform in use?

Not being a streamer, I purely used the microphone for gaming sessions with my friends and also to record a few recordings of me reading articles for demonstration purposes. My only references for comparison were much more expensive Shure microphone recordings, my cheaper gaming headset microphones, and my Zoom H4N recorder that I’ve used for sound design projects in the past. With that being said, I could not compare this microphone against other condenser microphones in its price range or in higher price ranges, such as the much-recommended Blue Yeti microphone. 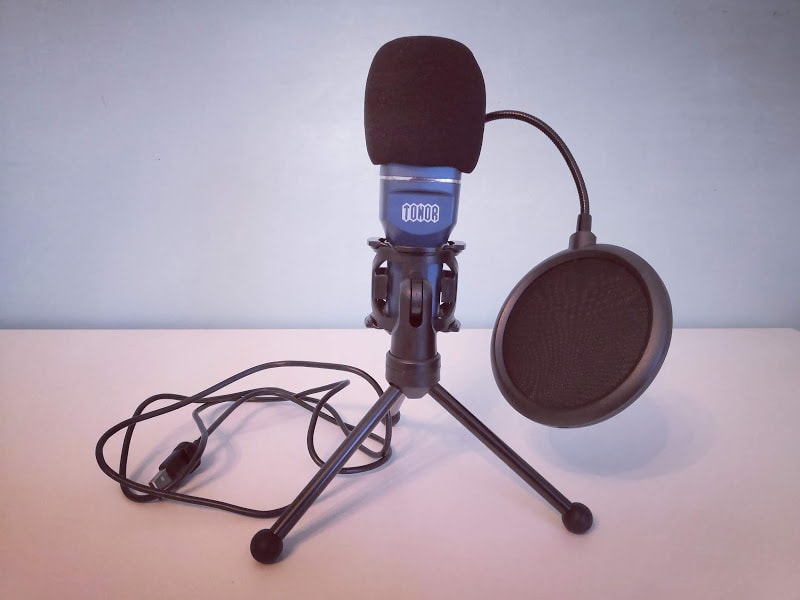 The Tonor TC-777 microphone was certainly a competent microphone to use, especially considering that it only costs £34.99. Initially, I had issued with the sensitivity of the microphone, as I was using it in my sitting room with no sound dampening measures in place. The result was my voice was transmitted with echoes of my voice reverberating off of the walls and also background noises. I then tested the microphone in our hallway cupboard, which produced a much cleaner sound, however, it was obviously not practical for me to squeeze my whole gaming setup between our coats and shoes. If like me, you do not have suitable soundproofing or can only game in a shared space, then the sensitivity of the microphone may be an issue, however with some foam or even pillows to dissipate some of the background sound, it should perform decently for those who wish to use it for recording or broadcasting vocals.

Having moved the microphone back to my normal gaming setup and jumping into some games of Rocket League with my friends, I found that the microphone did not suit my needs as a regular gamer with no intention of streaming. I reposition myself several times during a gaming session – sometimes several times during one match – and I had to be repeatedly prompted to move back to a position closer to the microphone, or at least within the range that it could comfortably pick up. I found myself having to raise my voice just to be audible and ended up pushing through periods of discomfort just to remain in front of the microphone’s pop shield. While the quality of the sound was higher than my normal gaming headset, the inconvenience of having this constantly on my mind while playing has left me with no doubt that this sort of a set up does not work for me. If you are a gamer just looking for a microphone to use while playing with friends, you should consider whether you have an appropriate space to use it in and also consider picking up a boom stand so that you can position it in an area where you are unlikely to need to move it for long periods.

With that being said, the Tonor TC-777 microphone is not primarily aimed at gamers like me. If you are a streamer or YouTuber who is going to be sitting in one position in front of a camera for extended periods of time, this budget microphone could certainly be a worthy addition to your setup, especially in the early stages of your streaming career when you are exploring the viability of your new career. The £34.99 price tag will not break the bank and its decent sound quality when used properly makes this a worthwhile addition to the setup of anyone looking to test the Twitch waters.

This one really comes down to BUY or AVOID – we are talking about a price bracket where waiting for a sale would only have a negligible impact on the value.

If you are a gamer who is starting out as a streamer or a YouTuber, the Tonor TC-777 microphone offers excellent value. Assuming you have an appropriate space to use it in to counter the microphone’s sensitivity and intend to remain close to it for extended periods, you’ll find the sound quality to be a significant improvement over integrated microphones and headsets, and of a quality that would have cost at least three times as much a decade ago. It is a very competent microphone for a very reasonable price.