Who does not like power? Surely almost everyone does. Don’t be alarmed, though, for this isn’t some philosophical rant about man’s thirst for power –  instead, it is the late review for a game that came out in August of this year. The game in question is The Universim, developed by Crytivo Games. Released in Early Access, this little Indie game caught my attention with its beautiful visuals and interesting premise, but is that alone enough to carry the game?

The God Game genre has had a great track record in the past, but lately, it has struggled to stay on top of the wave of trends that seem to have overtaken the gaming industry. Ever since games like Reus (2013), gamers have wished for more power and control over the many little humans who populate their virtual world. After all, there was always something about influencing your people’s prosperity and technological advancements, as well as helping them survive the dangers of a harsh world. If you were waiting for a definite God Game experience, then The Universim might just be the game you have been looking for, but if you are still unsure about this specific genre then this game certainly won’t change your mind. 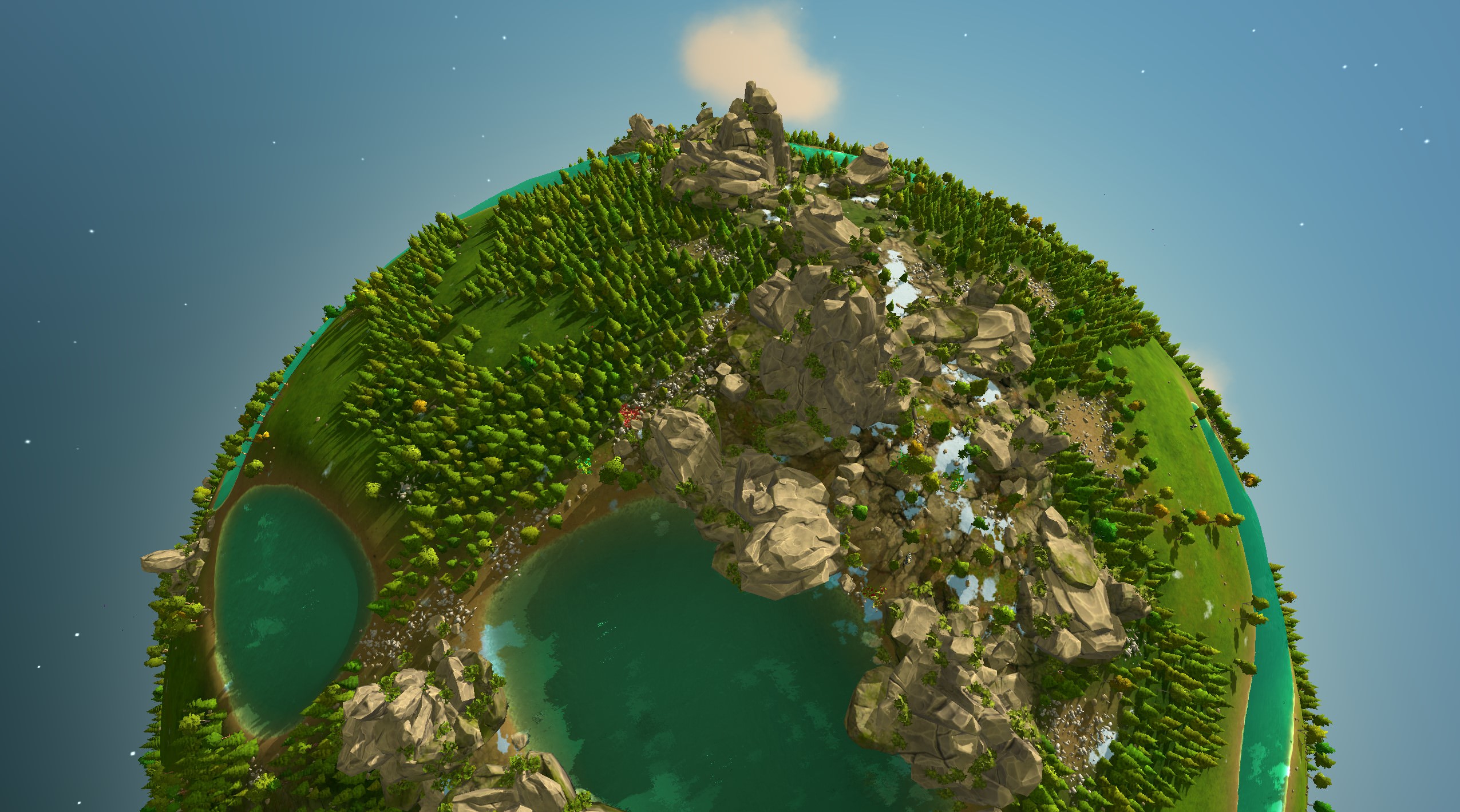 Each time you start a new game, your starter planet will be different, offering new challenges each time.

Meet the Nugget people. They will be your Adam and Eve, a fragile and bizarre species that relies on the player’s God powers to advance their civilization to great heights (literally).

When starting up the game, the player does do not possess their full set of God powers and will be forced, for the time being, to look after one single planet, which the Nuggets inhabit. Events start to unfold with the press of a button, which sets off the Big Bang that creates an entire universe. We will be able to colonize other worlds in the future, but for now, we will have to make do with our little planet. In the game’s current state, you can only progress your civilization to the Middle Ages, so there really isn’t a lot to see just yet (this is Early Access after all).

It is worth mentioning that these planets are all randomly generated. Each planet will be unique every time you start up a new universe, with each planet having various degrees of hospitality. Some may have more natural resources than others, and some might have different terrain and fauna, but most will feature at least a few tidbits of forests, sand-filled deserts, mountains and lakes.

The climate of our planet has a direct influence on the prosperity of our civilization. Obviously, the Nugget people need to be provided with food and water, so one of the first things one should do is prepare crops. You create some farmland, convert some of the inhabitants into farmers and decide what you want to grow. But it is not as easy as it is in Minecraft – in The Universim, specific temperatures are required for growing certain crops.

For example, there are crops that will only grow in a more colder climate – say, 0 to -5 degrees – and then there are certain plants and crops that require a more tropical climate – from 5 to 15 degrees. When you have wrapped your head around all that, you can truly begin farming. By ordering the Nuggets to repeat the same process over and over, the player can ensure a steady supply of food for the people. 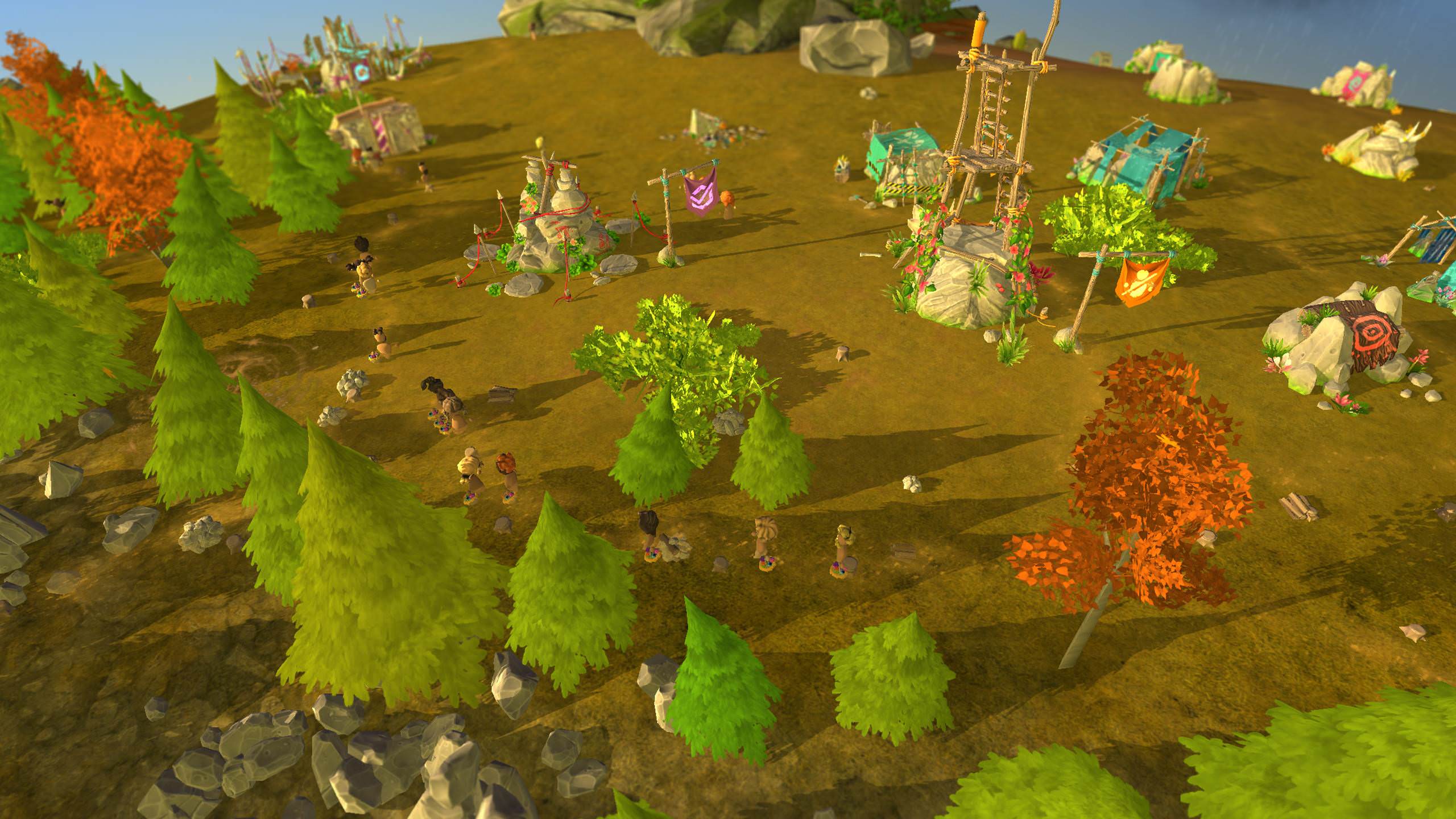 Your people will often pray to you, asking for help. These requests will range from understandable to ridiculous.

The player, for all their omnipotence, is more of a helping hand, as you do not have direct control over your little people. You can influence the Nuggets in a number of different ways however – whether it is causing them to fall in love with each other and start a family, healing them when they are in bad health, increasing their happiness when they feel down, or even casting some sort of natural disaster on them as a means of punishment.

Construction of structures is a fundamental process in this game, both for the expansion of the territory and the well-being of your people, and will go hand in hand with the increase in population.
Speaking of increase in population – this is achieved when Nuggets head into their huts and vent off their hormones. Babies are, for gameplay purposes, are born very soon after the act is over.

If you expand too quickly and don’t form a well-sized population first, things can get problematic in some of the latter stages of the game. For example, one of the many tasks that the builder Nugget must carry out is maintaining the buildings in good shape, if the player has one too many buildings and not enough builders to keep them all in order, these structures will begin to deteriorate and collapse. In keeping with the concept of a “helping hand”, the player – a God, won’t be able to do anything, other than observe the consequences of something they could have prevented. 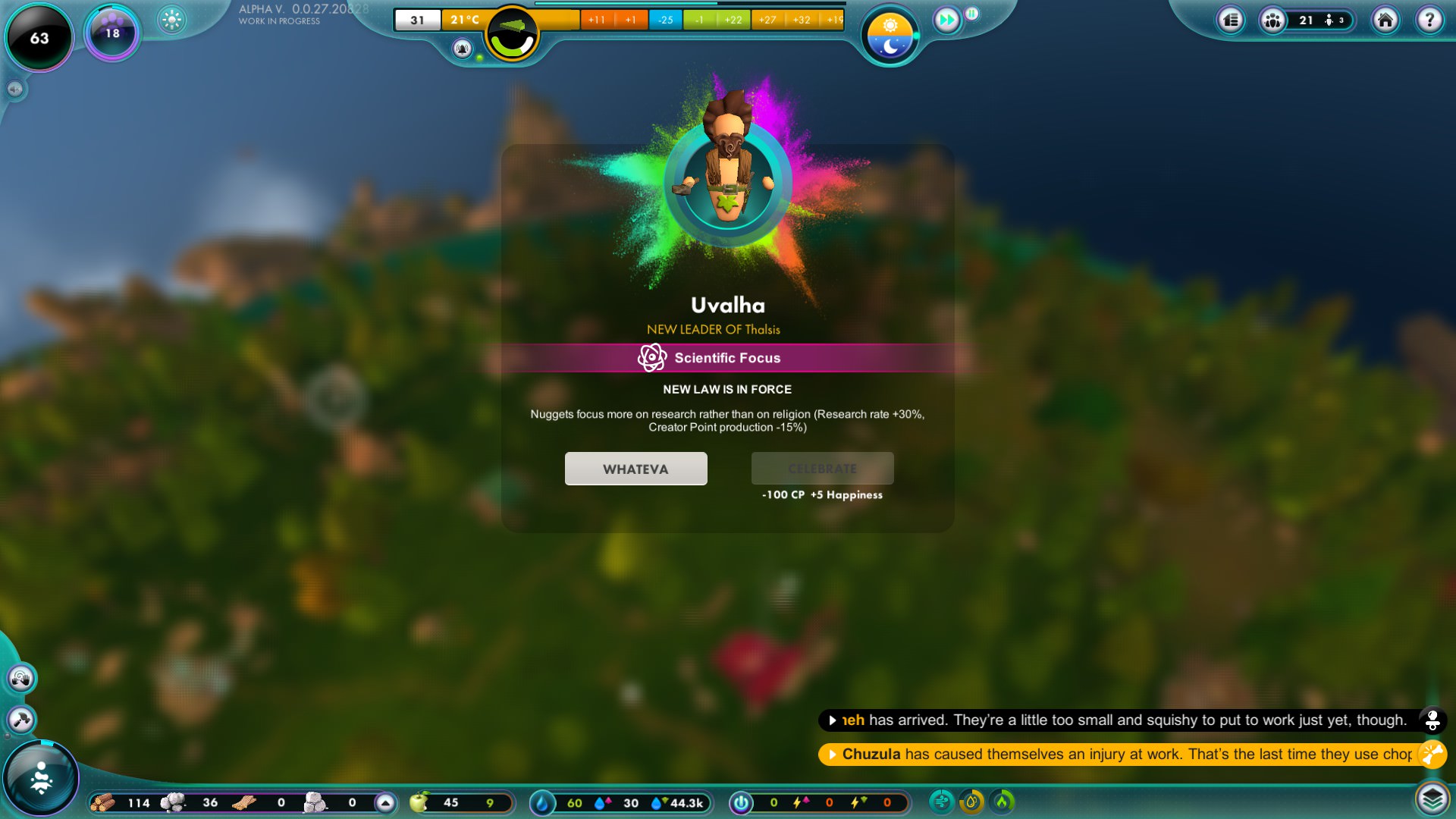 Each inhabitant of your world possesses their own character traits. Some are more lazy, while others are more hard-working.

The Universim has a very vibrant ecosystem, that is populated with all kinds of creatures – predators, herbivores, and even aquatic life forms. The player can use these animals to gain different kinds of resources, but the animals aren’t just going to watch you pick them apart, for a pack of wolves might break into your settlement and kill some of the Nuggets. Your actions as a God, as well as the actions of your Nuggets, will shape the world you live on. Global warming can be brought upon your planet if the player cuts down one too many forests, and eliminating natural habitats of different species is no good, either.

Will you use up every available resource at your disposal to create a metropolis like no other and rise to greatness, or will you methodically create a more sustainable and well-rounded ecosystem? Treat nature badly, and it will make sure to send a few tornadoes, volcano eruptions and earthquakes your way some time in the future. 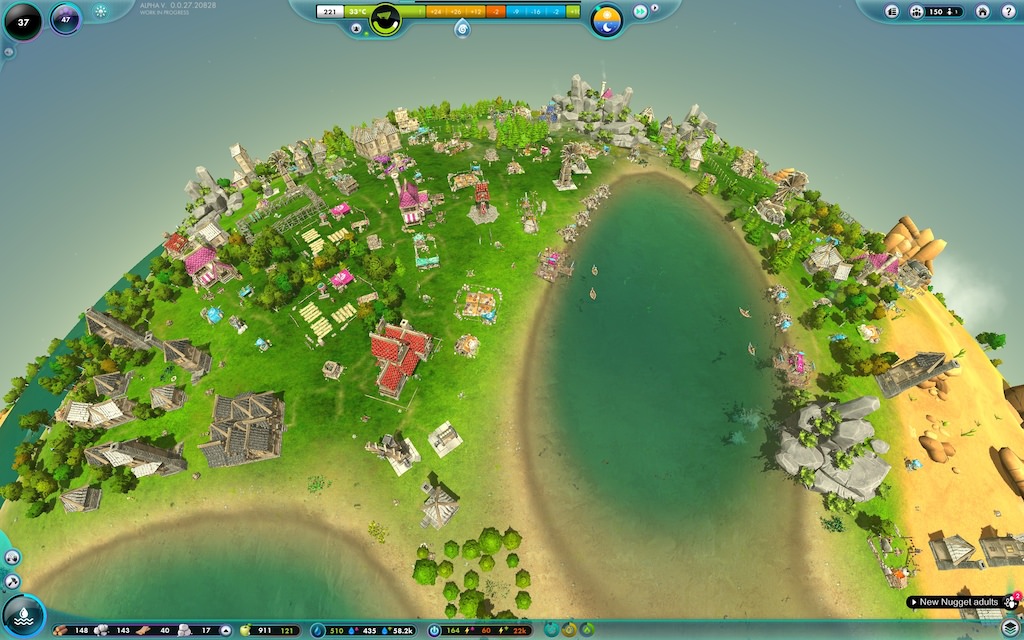 Currently, the opportunities for civilization advancements in this game are quite limited. More eras are to be added in future updates.

Graphically, the game looks very pretty. You can zoom in and out to inspect your civilization – even from all the way up in space, which is a neat little feature. The game is presented in a relatively simple planetary scale, which makes it very easy to track the progress of your people. There are all kinds of weather effects present in this game that really add to the experience, such as little drops of water appearing on your screen when it rains, and lightning going off in-between the clouds. No complaints here.

Moving onto this game’s music, I have to say that it just as good as I expected. There is no pompous orchestra music and such – instead we get a soundtrack that is pleasant to listen to, doesn’t get repetitive and greatly elevates the atmosphere of the game to new heights.

Onto the negatives. The game is a tad bit too easy at the moment. You will fail plenty of times, but more often than not it will be because you stumbled somewhere at the start. Choose a nice, warm starting region with plenty of trees and water, resolve the food problem, and you’re basically all set. Keep at it, and your civilization of Nuggets will grow just by researching new things and building more structures. There is not much that can hinder your progress for too long.

One bug that I found quite frustrating was that once I reached a Nugget population of 70, the game stopped saving my progress, and once I returned to the game, I was baffled to find all my save files deleted. I would be lying if I said I wasn’t at least a little bit mad.

On the other hand, The Universim is quite well optimized. I encountered no performance issues during my time with the game, even with the highest graphical settings. The framerate was steady and didn’t hinder the gameplay. 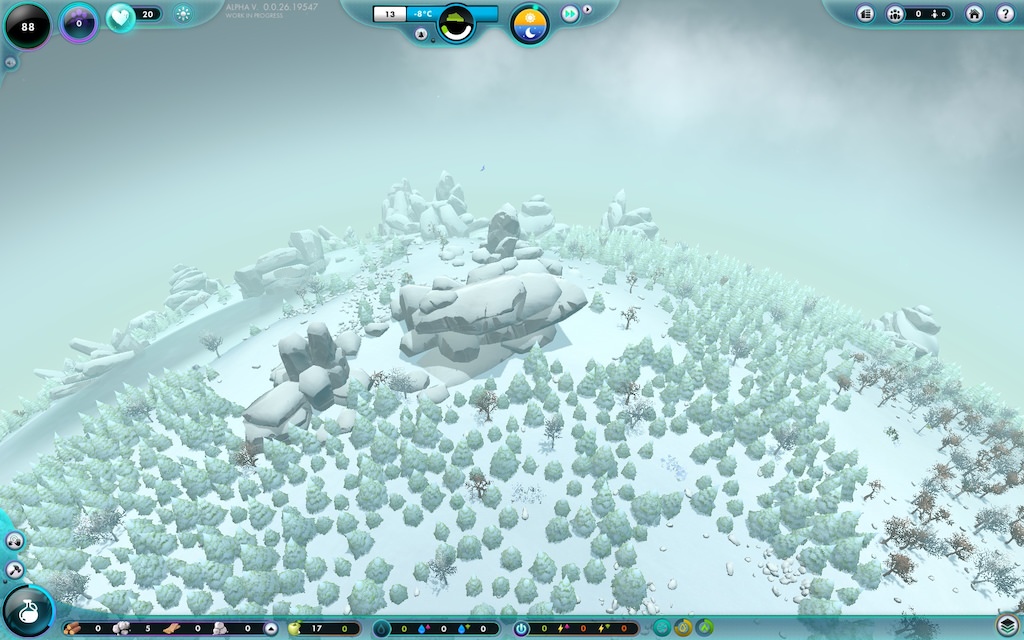 Each new season will bring its own benefits, as well as hardships.

When everything runs perfectly, The Universim is a fantastic example of a God Game done right. The population develops and grows before our very eyes as we admire the fruits of our labor, just like a craftsman when he creates something beautiful. On the other hand, the Early Access side certainly makes itself known to the player, and a plethora of bugs and unfinished content weight the game down. If you’re on the fence regarding this game, then I recommend you wait a few months, because currently there really isn’t THAT much to do.

The Universim is currently available on PC, Mac and Linux. One can buy it either through Steam or GOG platforms.