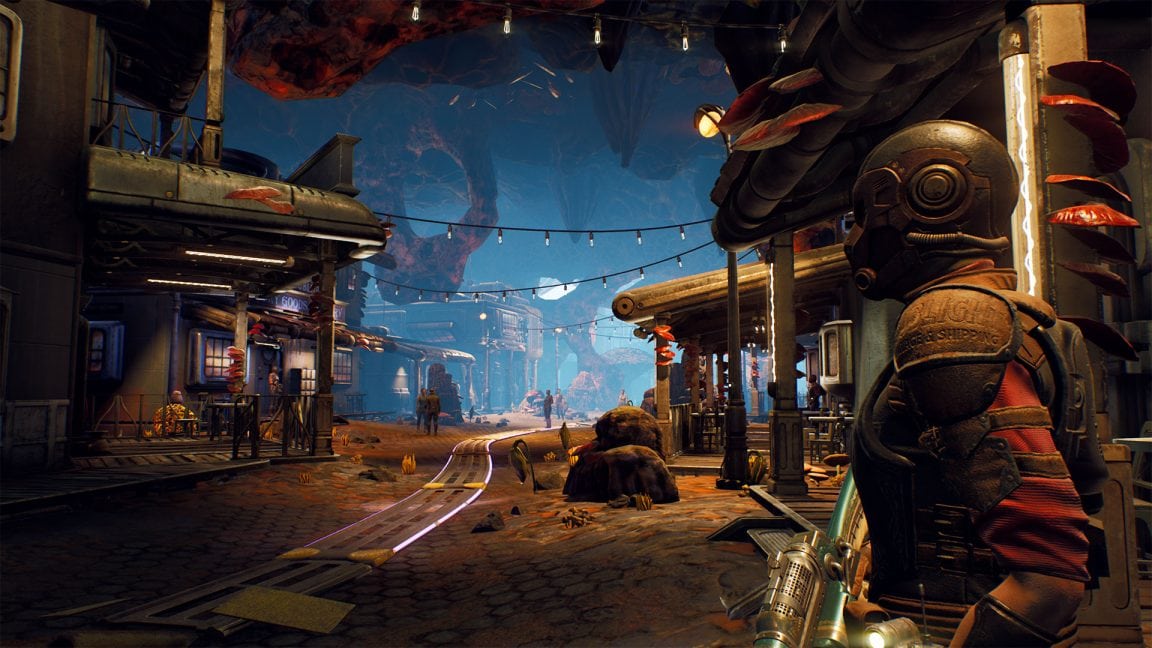 The Outer Worlds was developed by Obsidian Entertainment and published by Take-Two Interactive’s Private Division. It released on PS4, Xbox One, and PC October 25th, 2019, and is due to be released on the Nintendo Switch in 2020. You might remember the name Obsidian Entertainment. These are the guys that made Fallout: New Vegas and are made up of personnel who use to work for Black Isle Studios who produced RPG classics such as Icewind Dale, and Fallout 2.  Given that the team behind The Outer Worlds come from good stock, it’s little surprise to see that The Outer Worlds is such an enjoyable game to play.


The Outer Worlds starts like any other RPG; you create your character by designing their appearance, choosing their attributes, skills, aptitude, then name them and you’re off. The game is set in an alternate future that diverged in 1901, where President William McKinley is not assassinated by Leon Czolgosz. This means that Theodore Roosevelt never succeeded William, allowing large business trusts to dominate society. This allowed megacorporations in the future to begin colonizing and terraforming alien planets. You begin aboard an abandoned colony ship stuck in cryosleep for nearly 200 years. A scientist named Phineas Welles awakens you from cryosleep to help with his plans to save all the rest of the hibernating colonists. Thus your journey begins at the nearby colony of Emerald Vale, where the story reacts to your every choice. 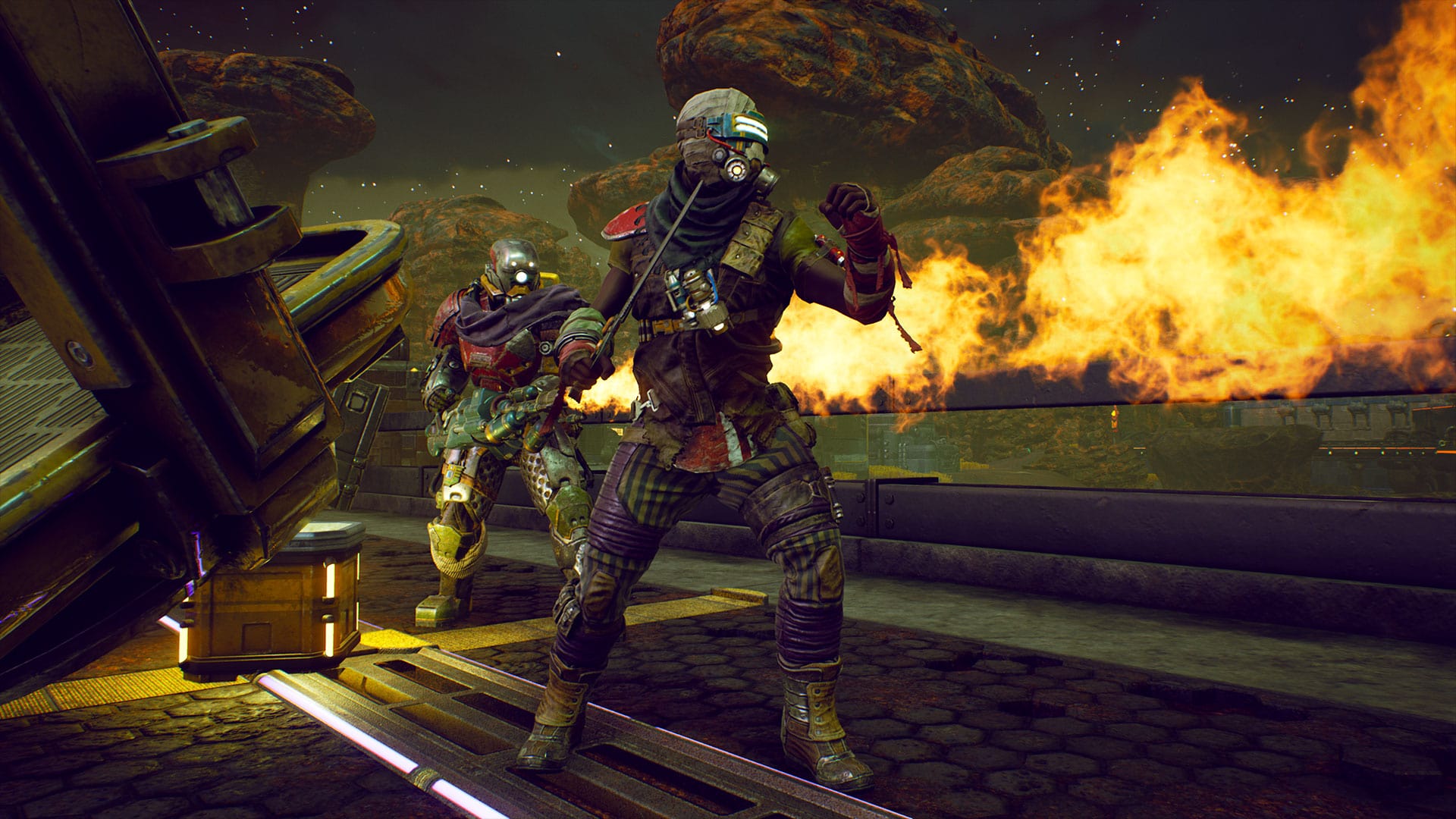 You quickly start to notice that a few megacorporations in the area dominate the Halcyon colonies. This results in anyone employed by them to live and breathe everything about the company. The company owns the town, its people, and resources. People are just another asset of the company. Even in death, the loss of the company asset means your surviving kin (or closest friend) must pay your burial tax (or death tax). This is what life would be like if one corporation owned everything you needed in life, from the food you eat, the place where you live, and the entertainment you consume.

This is where you step in, the non-company man, set out to change the colonies and rescue them from the evil megacorporations or side with them. It’s your choice, how you complete quests will determine the story’s overall outcome. Quests range anywhere from fetching things for people to fighting off creatures or humans. Most of the quests are pretty simple, but some of them have branches that change depending on your choices. You can even kill the quest giver, and it will change the story accordingly. 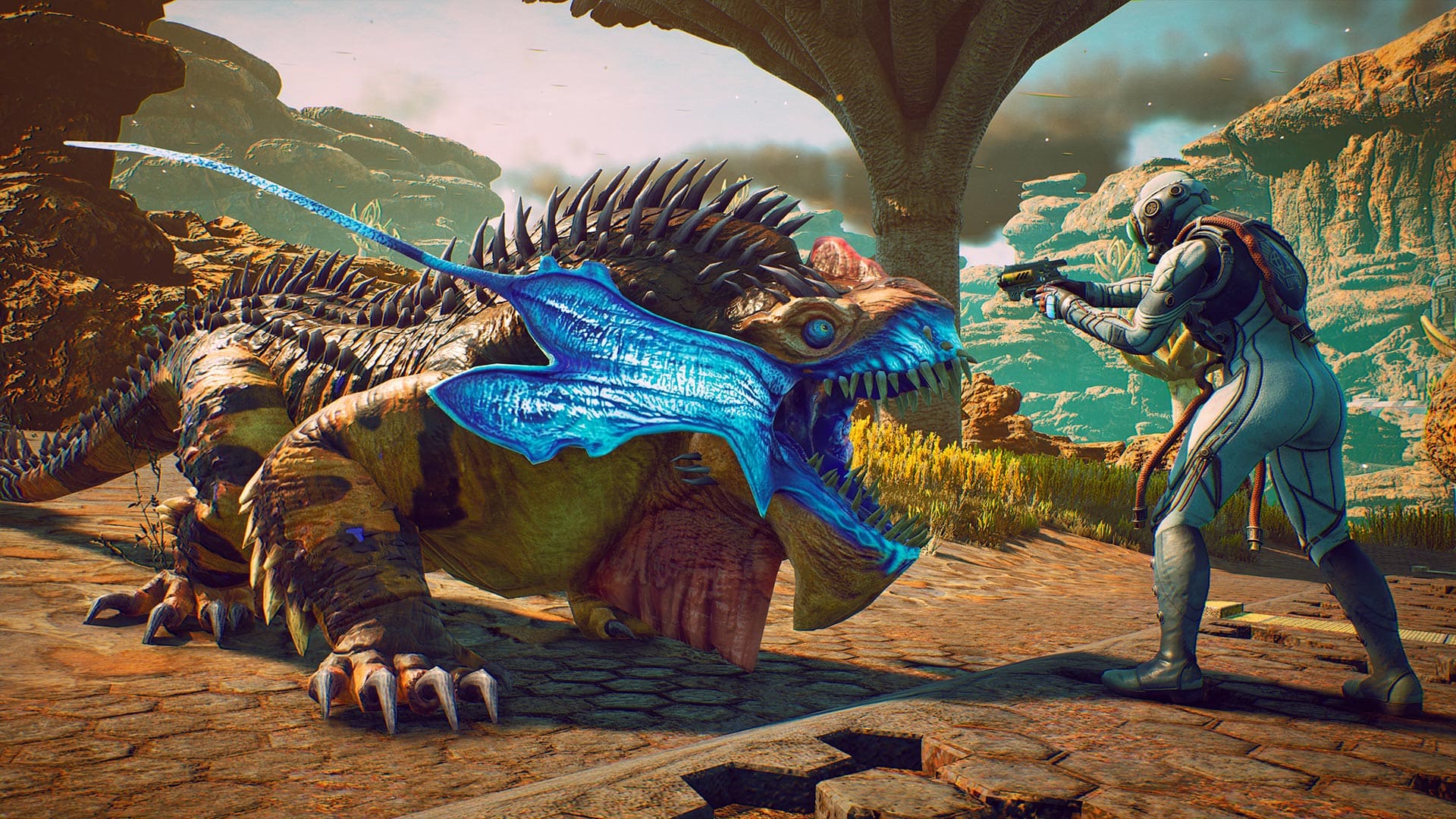 While questing you’ll engage in quite a bit of combat. Combat in The Outer Worlds is in the First-Person Shooter perspective. You’ll have handguns, rifles, heavy weapons, one-handed melee, and two-handed melee weapons to choose from. There are even some rare science-based weapons that can be found. These do unique damage to your enemies. Such as sending your enemies into the air or shrinking them. You can focus your character to specialize in a few types of weapons or all of them if you have enough skill points. Doing this unlocks special skills and more bonus damage while using said weapons. There is also something called TTD. This is like Fallout’s VATS system in a way, but it only slows downtime so you can aim for better damage against enemies. Though, if you move or shoot while using TTD, the resource depletes very fast only allowing you to effectively get in 3 or 5 seconds of slow motion. You can expand the time of TTD with perks to make it last longer.

As you level in The Outer Worlds you’ll always get 10 points to spend on skills, and 1 perk point every two levels. Skills are arranged into seven main groups Melee, Ranged, Defence, Dialogue, Stealth, Tech, and Leadership. Each group then has three skills under them. For example, the Ranged skill group has the following skills under it, Handguns, Long Guns, and Heavy Weapons. When you put a point into the main skill group, each skill underneath them gains one point as well. Until they all reach level 50, then you can focus the points on a single skill instead. The reason you want to focus on a specific skill after 50, is the fact that each single skill gain bonuses when they reach a specific level. For example, Handguns when it reaches 20 you unlock TTD location hit effects, 40 increases critical damage with handguns by 50%, 60 increases armor penetration by 10%, and so on up to the skill level 100. It adds a lot of choice in how you want your character built over time. Perks, on the other hand, are more like extra bonuses, like carry more stuff, or add ten points to a skill. You only get to pick one every other level. 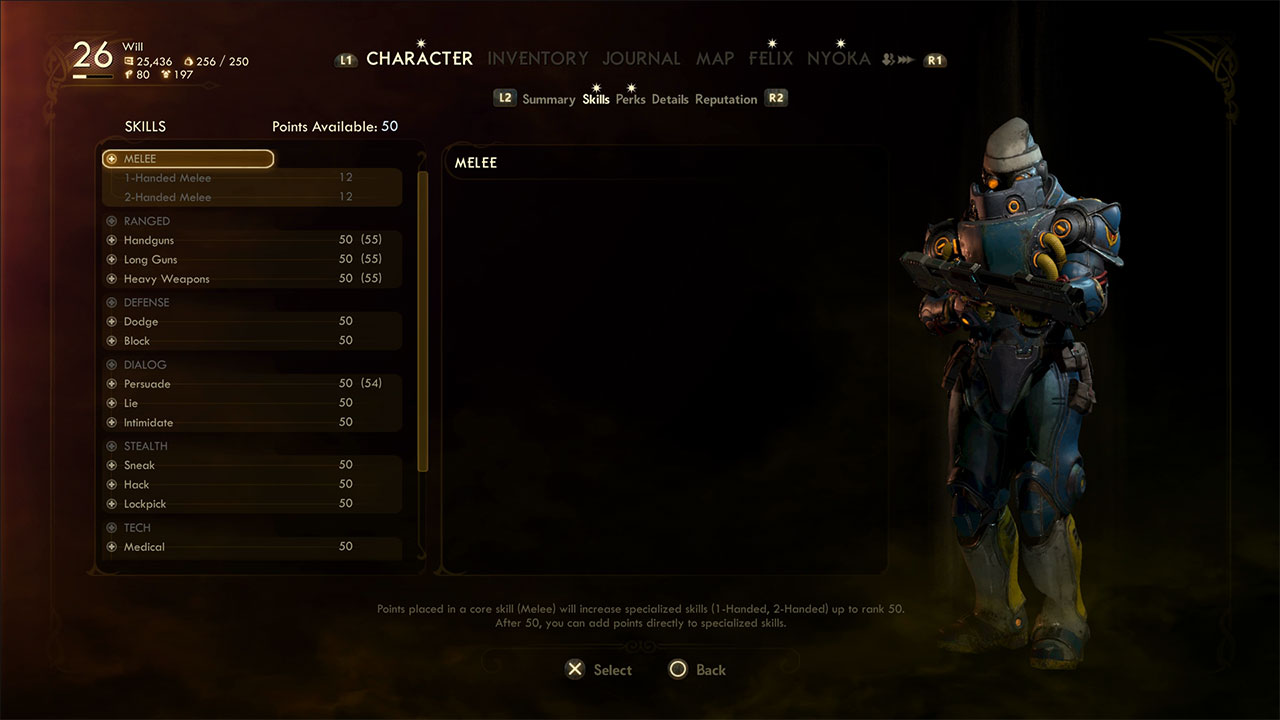 As you explore the worlds of Halcyon, you’ll meet people along the way that can become your companions. Companions can also gain levels and get perks that increase damage in combat or increase your skills while in your party. Though, you can have only two companions with you at all times. They each have their own unique background story and special combat skill. Their special combat skill has a cooldown but does massive damage. Not only can companions gain levels but they can also be outfitted with the weapons and armor you find in your explorations.

Armor and weapons can be found or bought in The Outer Worlds. There is only two types of armor, a helmet, and a suit piece. You can carry as many pieces of armor or weapons as you like so long as you don’t reach your weight limit. Though you can only have four weapons ready to use during combat. Armor and weapons degrade over time and have to be repaired. Repairing your items happen at the workbenches. The workbenches can also install mods into armor or weapons, tinker with the items in your inventory (which increases armor rating or damage of a weapon slightly), or destroy your items for spare parts. Spare parts are used to repair the armor and weapons you use. So it is always a good idea to keep as many spare parts as you can. Workbenches are not the only place you can repair your items. If you have the skills you can repair in the field from your inventory, even destroy items from your inventory. But tinkering and mod installs can only be done at a workbench.

As far as graphics, sound, and voice acting goes The Outer Worlds is pretty well polished. Graphics look pretty good, the sound effects fit the overall world, and the voice acting is top-notch. No real complaints here, and never really ran into any bugs or game-breaking issues. Though I do have some complaints about the balance of the game. I felt it was a little easy with the speech checks and never found the combat to be challenging. The game wants to be an open-world RPG but feels a little too confined and doesn’t give you that go-where-ever-you-want feeling like you would find in Skyrim or Fallout. With that being said, the writing and storytelling is top-notch and puts to shame some other games in this genre. 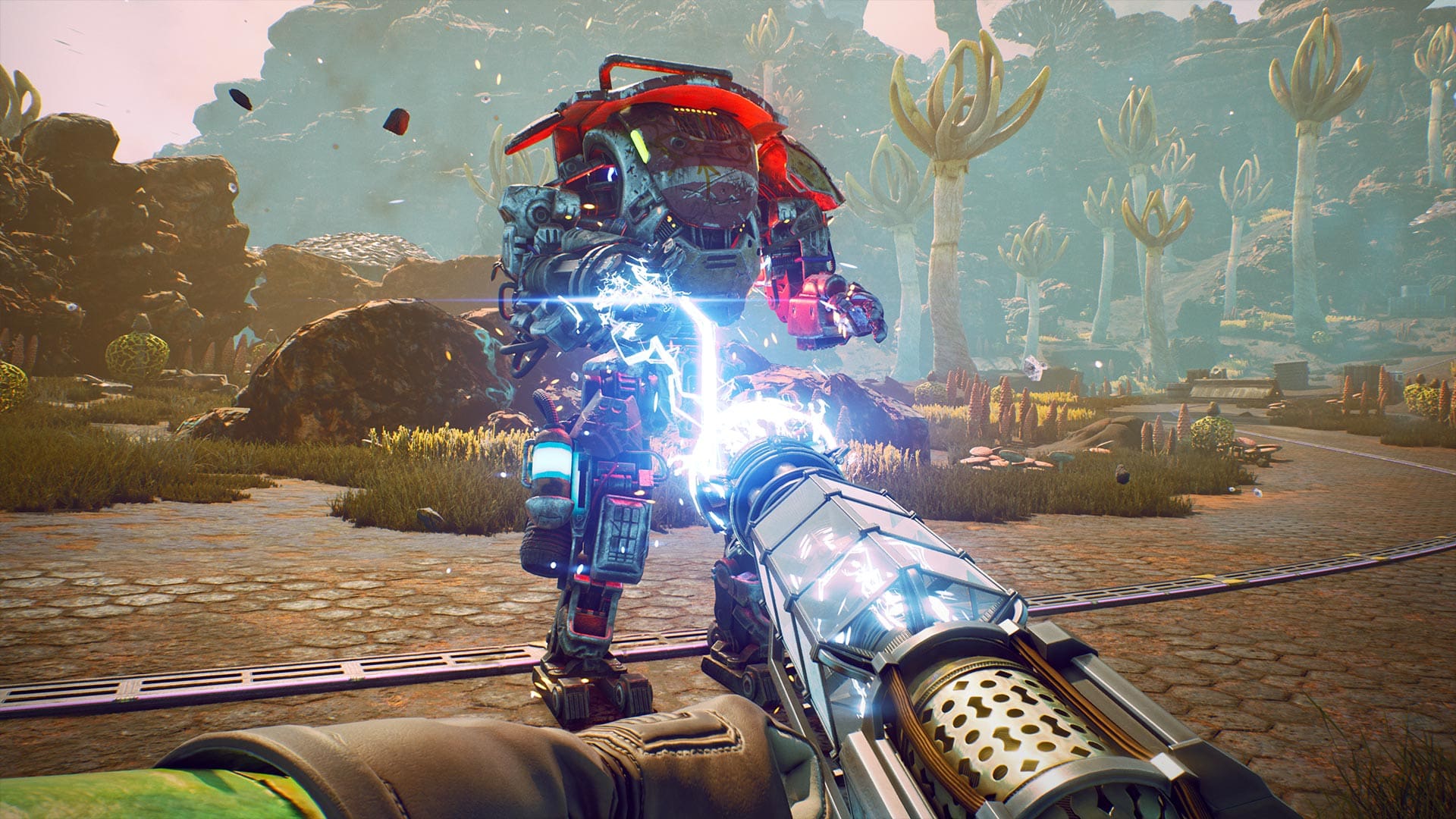 Overall, The Outer Worlds satisfies that RPG itch that so many games in the genre miss. Great storytelling which changes with your choices, well thought out quests, awesome dialog choices, and good combat that feels solid. Though at times the game can be a bit too easy and lacks in weapon and armor cosmetic variety. I also felt the game gave you to many skill points that you could easily be a renaissance man. But that shouldn’t stop you from picking it up. The Outer Worlds is well worth the journey and in my opinion the best RPG of 2019.