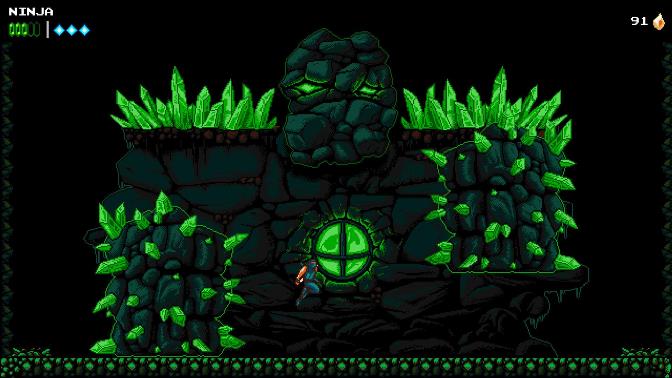 The first Ninja Gaiden game came out a whopping 30 years ago in 1988 as a two-player arcade game, and only one year later hit the classic NES platform, thus becoming a huge success. You took on the role of the revengeful ninja who slashed and jumped his way through incredibly difficult platforming levels.

Now, enter 2018. It seems as if the current “hot thing” in the Indie video game market is to use nostalgia as a selling point. Spiritual successors are one thing, but it’s games such as The Messenger by Sabotage Studios that really push the trend forward.

Thankfully, in this case, the developers have successfully managed to create an exciting 2D platformer game that is as exciting and fun as it is faithful to its main inspiration. 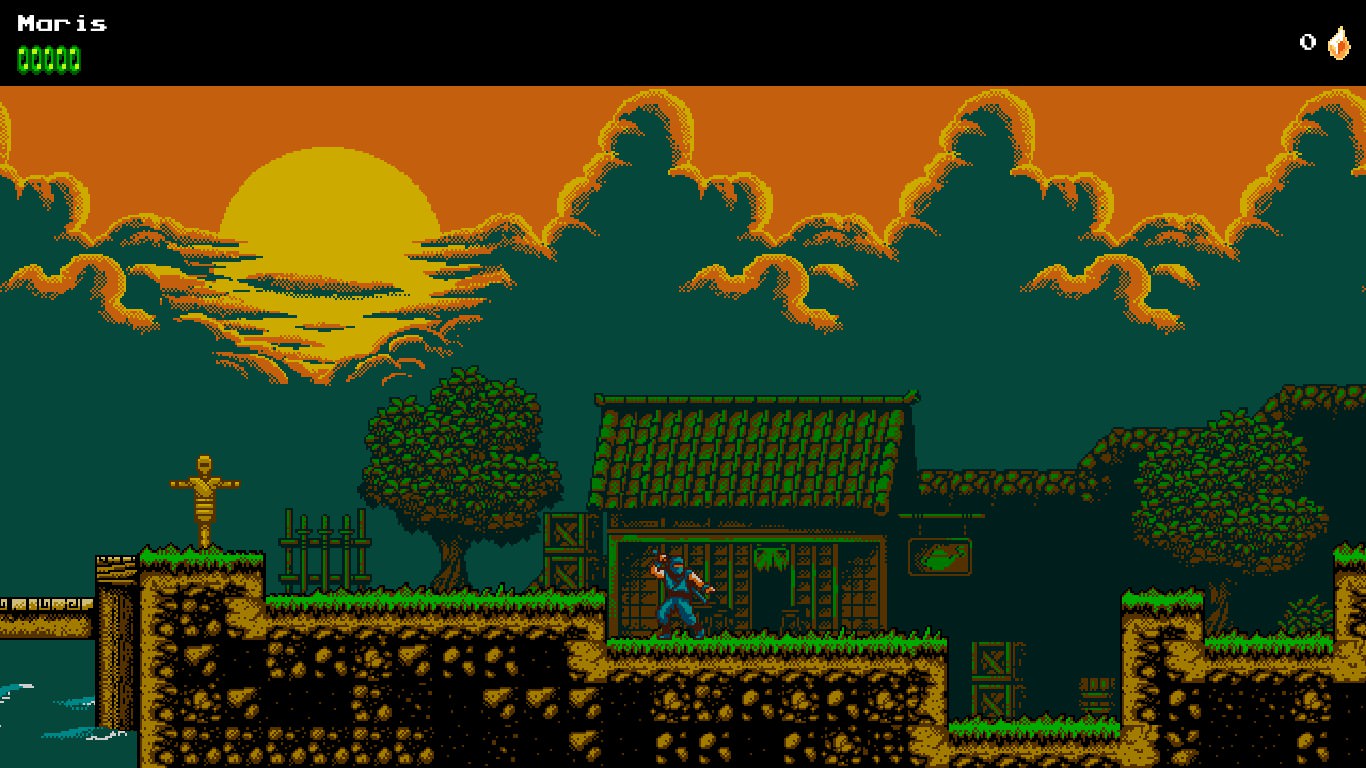 In many ways, The Messenger is a slightly modernized take on Ninja Gaiden. It’s a game that perfectly utilizes all the arcade elements of the late 80’s – tight controls, a good sense of humor, high difficulty and addictive gameplay. Even though the story is much more straightforward than the 1998 NES classic, it still remains an incredibly fun ride from start to finish, with great level design and well-written dialogue.

Our main character is a member of a ninja clan. Demons have enslaved the Earth, and as a result, most humans have been wiped out, with the remaining one’s forced into hiding. The few that are left have gathered in a hidden ninja village at the western end of an unnamed kingdom, where they train day and night, preparing themselves for the return of the demon army.

But not all hope is lost.

An ancient legend has it that one day a “Western Hero” will arrive and save everyone from the demon threat. And so, on a simple training day, the demon army appears and attacks the village, but the Western Hero arrives just in time to save the day and gives the player character a scroll of uttermost importance, that he must now deliver to the three sages on the top of a very tall mountain. So begins our quest to save the human race from the demon threat. 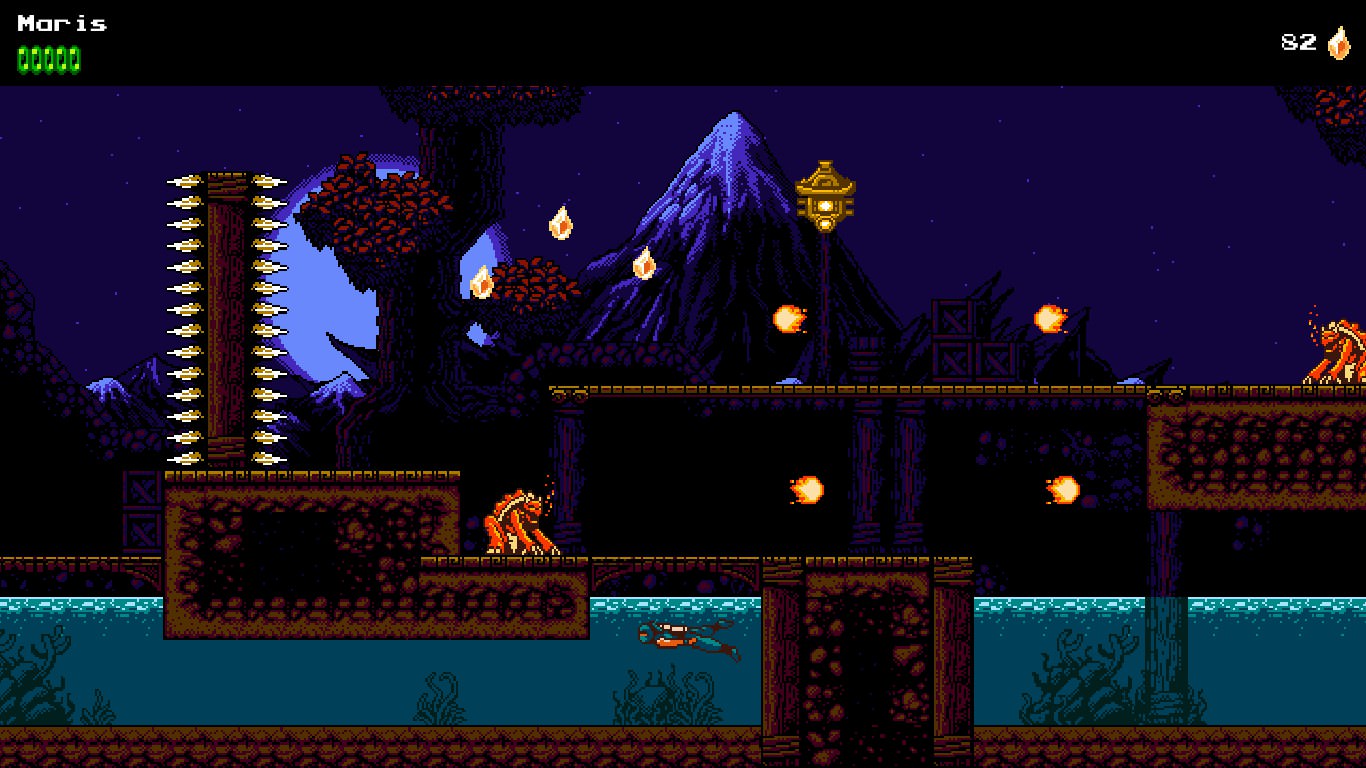 The Messenger is 2D platforming at it’s finest. Enemies are plentiful, and so are the platforms for you to jump on.

As I mentioned, The Messenger is a 2D, 8-bit platformer game (it later turns into something more of a Metroidvania, but I won’t spoil it for you). You will jump from wall to wall, do somersaults in the air, and generally do all the things you would expect a video game ninja to do.

As far as weapons go, you will only have your sword to slice through enemies, who by the way respawn as soon as you exit the screen. After the first few levels, the enemies that you encounter will greatly increase in quantity, while simultaneously becoming more annoying, especially the ones that hurl projectiles at the player. You will find orange gems scattered throughout each level that can later be used to unlock new upgrades. Just like in the old Castlevania games, hitting candlesticks and lanterns with your sword will drop additional gems and other bonuses. The player isn’t limited to just their sword, however – you can also utilize shuriken-like projectiles to destroy enemies from afar.

As per tradition, at the end of each level the player will face a boss. These aren’t very hard (at first), but you will have to die at least a few times to memorize their patterns and find the right technique to beat them. Still, let’s face it – the enemies in this game aren’t overly complex, but your speed and quick reflexes will not always save you from each attack. You have to keep in mind that this game is not made for amateurs, and will test the skills of even the most hardcore NES veterans. Difficulty is a fundamental aspect of a game like The Messenger. Keeping that in mind, the developer studio has done a great job with striking a balance between challenge and frustration, while providing the player with an experience that enjoys the grace of not suffering from the problems that plagued similar games in the past.

Each stage has a few portals spread about that transport you to the shop. Here you can buy health upgrades and unlock new skills from your skill tree, or just have a chat with the shopkeeper, who is arguably the best character in the whole game. He will give you insight about your current location, provide the player with advice from time to time, and occasionally tell some truly deep short-stories. But back to the upgrades. These are quite essential in this game – they will help you stay alive using things such as additional HP and some other ones that I would rather the players discover for themselves.

Speaking of staying alive, that is the one thing that you will have to get really good at. If you happen to meet your end during one of the stages, you will be transported back to the last checkpoint, courtesy of your little demon buddy/guardian. This little annoyance will then proceed to gobble up a certain amount of your upgrade gems until the debt for saving your life is paid. And that is how it’s going to be every time you die, so be careful! 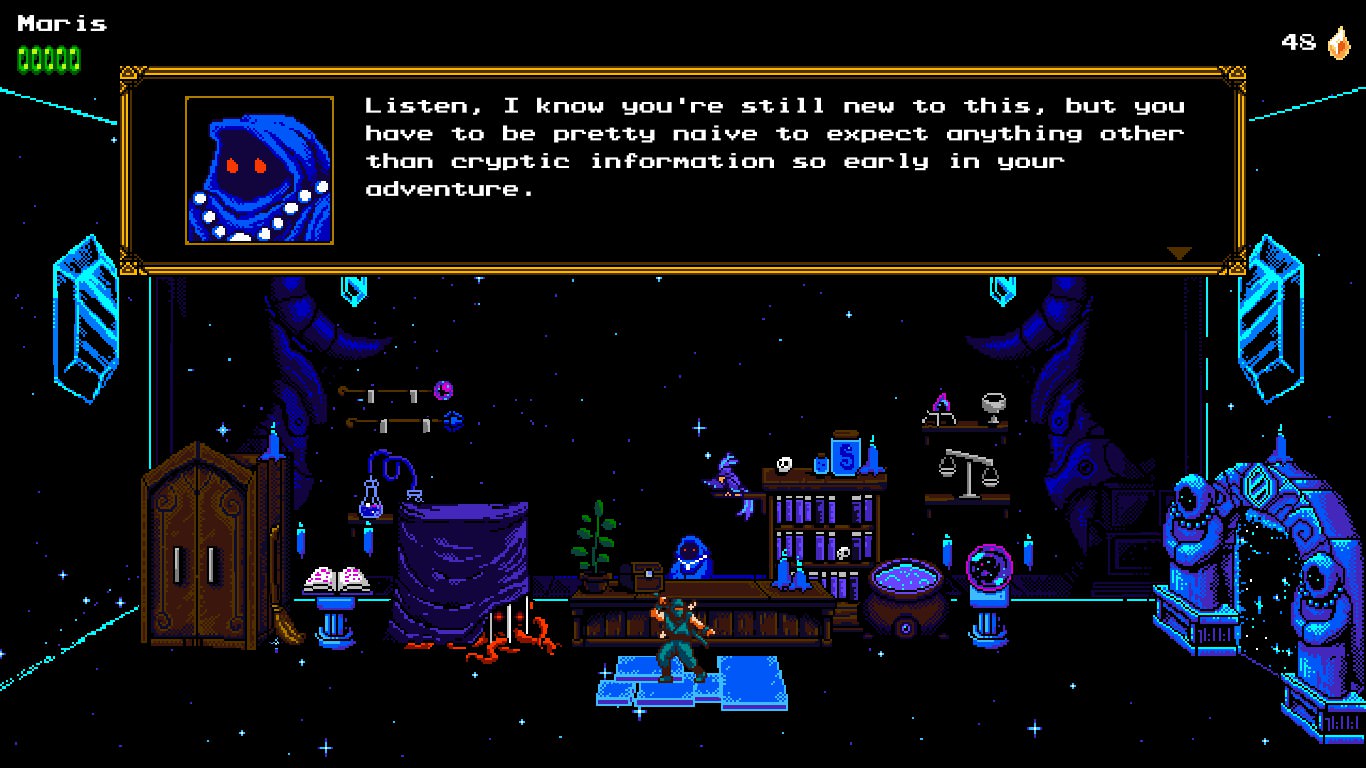 You should visit the shop every chance you get, whether it is to buy the upgrade you’ve been saving up for the last two levels for, or simply to listen to the shopkeeper’s sometimes cynical banter.

From a technical point of view, The Messenger is a very solid product, where attention to detail is evident in all of the games aspects. The graphics, in perfect retro style, are rich and evocative, and more importantly – free of bugs and glitches, that would otherwise bring the game down. The character sprites look really good, are well animated and utilize a variety of colors, making it so that you can always tell what exactly what you are looking at. In spite of the obvious references to the classics of the past, The Messenger shows off a great personality and manages to stand out in a crowd of similar games of the genre.

The icing on the cake, however, is the soundtrack by Rainbowdragoneyes, a very talented chiptune musician and author of several other chiptune-based tracks. His work on The Messenger is simply extraordinary, with each level having its own musical theme, making it that much more unique. 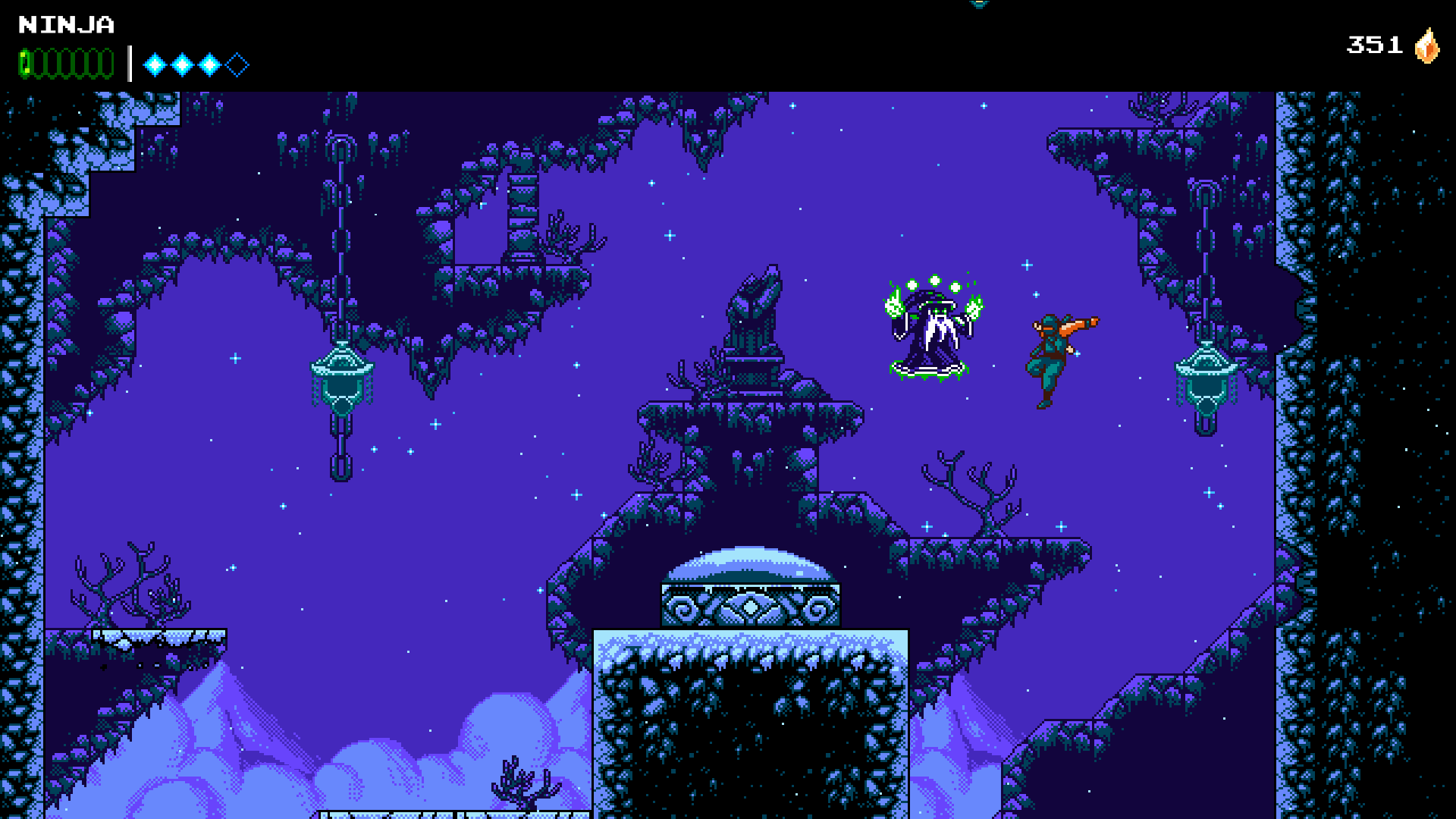 While the enemy variety could use some work, seeing each new level design is a treat in and of itself.

The Messenger is a fantastic reminder of how much more simple the gaming industry used to be, back when developers created video games as much for themselves as they did for the shareholders. Addictive gameplay, fun story and dialogue, crisp graphics and plenty of 2D platforming goodness. What’s not to like? Still, this game is not for everyone. If you are not into challenging games, you’ll never enjoy it. Well, I sure did, so that’s that.

The Messenger is currently available on PC and Switch platforms. PC users can buy it either through Steam or GOG platforms.