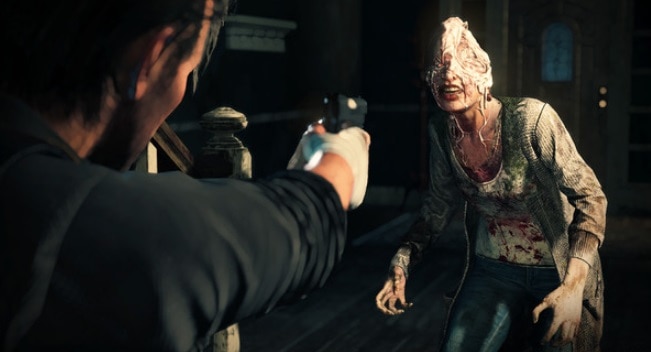 BY CORY SPIERS: When the final credits rolled on The Evil Within 2, I sat back in my chair and let out an audible sigh of relief.

In my more than 13 hours spent with the sequel to Tango Gameworks’ surprise 2014 survival horror hit, I had been knocked down, killed and generally terrified time after time as I scrounged for just enough supplies to make it to the next area.

And I loved every second of it.

The Evil Within 2 takes place three years after the events of the first game. Immediately, series protagonist Sebastian Castellanos makes a not so triumphant return. Sebastian has left his job at Krimson City Police Department and following the series of horrific events at Beacon Mental Hospital in the first game, the hits keep piling up as Castellanos now must accept his wife Myra has disappeared and his daughter Lily died in a house fire.

Castellanos turns to the bottle to quell his sadness and while drinking in a bar, he is reunited with agent Juli Kidman. Kidman explains Lily is still alive because the sinister MOBIUS organization faked her death. Now, MOBIUS needs Sebastian’s help, tasking him with entering a horror simulation where Lily is being used as the new core for their simulation system, dubbed STEM.

Inside the simulation, Castellanos enters Union– a seemingly normal American town, if it were overrun by horrifying aberrations out for blood.

Right off the bat, Union presents the main difference between the sequel and the first game. Sebastian is free to navigate the open-world Union, which operates as a hub world. It’s full of enemies, side quests and loot to find. It’s a vast departure from the first game’s constantly linear structure, and I think it’s a fine choice. It adds a definite sense of autonomy to the sequel and it feels like a more serious version of Dead Rising, with its undead slaying playgrounds and things to find.

The general exploration of Union is mostly enjoyable and you’re free to go wherever. I do wish there had been more to do in Union.

I wanted to explore it more and know more about it, but the game funnels off your access to the open world. Only in certain chapters are you allowed free reign over where you go between main story missions. During those times, I only ever ran into a handful of side quests, all of which ultimately boil down to going to an area, clearing it of enemies and flipping a switch. Don’t expect Witcher 3 level of depth to the game’s side quests.

Still, side quests offer a chance to find valuable resources and upgrade materials, which can be spent on a deceptively deep progression system. Like the first game, Sebastian can upgrade his combat skills, health, recovery and athleticism. New to the sequel is a shiny new stealth skill tree that offers a chance to have Sebastian make less noise while crouching or perform lethal takedowns from behind cover.

Weapons can also be beefed up using weapon parts scattered around the world. Each weapon type can be upgraded in damage, fire rate, clip capacity and reload speed, making for some meaningful choices with regards to your arsenal.

Like any survival horror game, supplies are incredibly limited in The Evil Within 2. Ammo and gunpowder are scarce, so stealth takedowns remain a smart way to thin out dense groups of foes. Stealth takedowns feel satisfying, although bigger foes can’t be quelled in one stealth hit. It may take two or more, depending on the adversary.

When stealth doesn’t work, which will often be the case, the Evil Within 2 becomes an orchestra of desperate improvisation. There were times I was detected before I could stealth kill an enemy. The enemy turned around, screamed and all of a sudden, I was overrun by four enemies, all very unhappy to see me. Then, it’s go time. 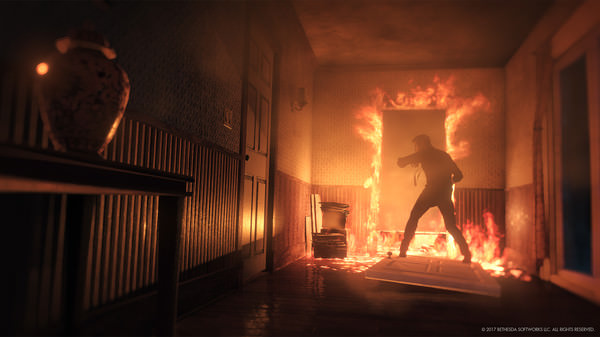 For the most part, combat in The Evil Within 2 is solid. The shooting is responsive and landing a headshot delivers the same satisfying, crunchy pop that became commonplace in the first game.

Where combat can sputter at times is when enemies get in your face. With no option to shoot from the hip, aiming down the sights can often cause you to aim right through an enemy as they clip through your gun. Firing while inside of an enemy’s hitbox often results in wasted ammo. When resources are scarce, that hurts.

The melee in The Evil Within 2 feels mighty clunky. Sebastian’s swing radius with his knife is microscopic and landing a hit, even when right on an enemy, is made difficult by shockingly finicky melee hit detection.

All of the game’s close combat issues aside, Sebastian controls as you would expect in a horror game. He’s deliberately clunky and slow at times, but it feels largely appropriate when put in the context of the game’s overall feeling of fighting to survive.

And fight to survive you will. Across the game’s 17 chapters, you’ll encounter numerous tough boss fights, hordes of enemies and moments that demand you make every shot count with dwindling ammo.

The first half of the game paves the way for a fantastic second half that is unrelenting as it delivers crescendo after crescendo. Just when The Evil Within 2 feels like it can’t spiral into any more of a fever pitch in its waning hours, it drops the hammer a few more times. 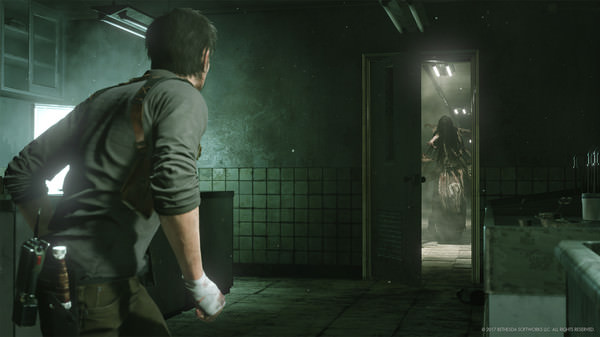 The game’s first eight chapters have Sebastian hot on the trail of a mysterious killer, who is wreaking havoc in the simulation and toying with Sebastian with hints about Lily’s whereabouts.

From chapter nine until the end, things take a brilliant 180 degree turn as the game flies off the proverbial rails in the best possible way, starts to deliver some definite Resident Evil 4 callbacks (not surprising considering Resident Evil mind Shinji Mikami is again the producer here) and results in an ending I think folks will earnestly enjoy and will want to experience.

The game’s first half is serviceable and delivers a few genuinely disturbing moments, but I’d wager a guess most people’s fondest memories of this game will come from the brilliant second half.

After completion, players get a handful of fun rewards and unlock the classic difficulty– the perfect stop for a masochist that features limited saves and upgrades and even more fierce foes.

I played the game on the middle difficulty, dubbed survival. I found the difficulty adequate. I died a shade over 25 times in my 13 hours or so making my way through the game. At times I faced frustration, usually over the deliberately scarce resources, but a cool head and a confident trigger finger were always enough to lead me through the adversity.

The Evil Within 2 delivers a classic survival horror experience that always keeps players at a disadvantage– the key trait of any game in the genre.

Despite my few issues with The Evil Within 2, I absolutely recommend it to fans of the genre.

I would caution that playing the first game beforehand would help. You could probably get away with skipping the first and going straight to the sequel, but why would you? The first game is brilliant and playing it will add some definite extra punch to certain aspects of the sequel.

The Evil Within 2 isn’t perfect, in fact, it’s far from it. But when it’s all said and done, it’s a game that knows what it is, takes some calculated risks and is an enjoyable ride, especially if you played and enjoyed the original.

I’m not sure it’s worth running out and buying tomorrow, if you’re on the fence. But with the deep discounts, it’s prone to at just over two months since release, I’d recommend you load your pistol, get that lump in your throat and see what The Evil Within 2 has to offer.

If you go in with the right expectations, I think there’s a lot to enjoy here.