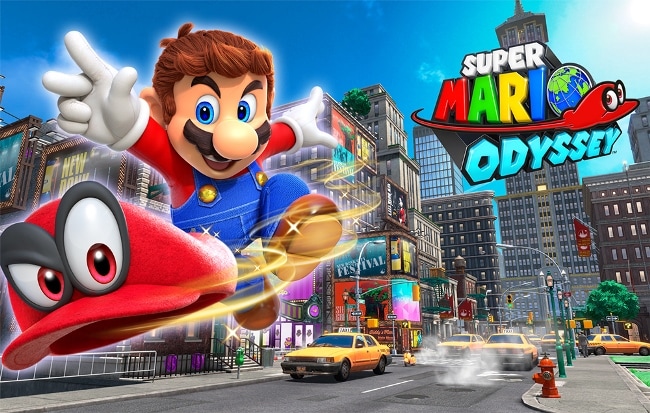 Super Mario Odyssey opens with Mario trying to stop his arch-nemesis Bowser from kidnapping Princess Peach to force her hand in marriage. With the help of his wedding planners, The Broodals, Bowser knocks Mario off his airship and shreds his signature cap to pieces. Falling from Bowser’s airship, Mario wakes up in the Cap Kingdom were he meets Cappy, one of several sentient hat-like creatures called Bonneters that inhabit the kingdom. Cappy tells Mario that Bowser has taken his sister, Tiara, hostage to use as Princess Peach’s wedding tiara. Cappy then asks Mario’s help to save his sister from that monster. Mario, the hero that he is, agrees to aid Cappy to save both Princess Peach and Tiara from Bowser’s clutches. At that moment Cappy notices a piece of Mario’s hat, which has been totally destroyed and decides to transform himself into Mario’s hat. After Cappy becomes Mario’s hat, Mario then gains the ability to now fling his cap, which can then capture creatures and objects for use during gameplay. Now that Mario has a hat, Cappy instructs him on how they can chase down Bowser with an airship of their own called the Odyssey, which is fueled by Power Moons. 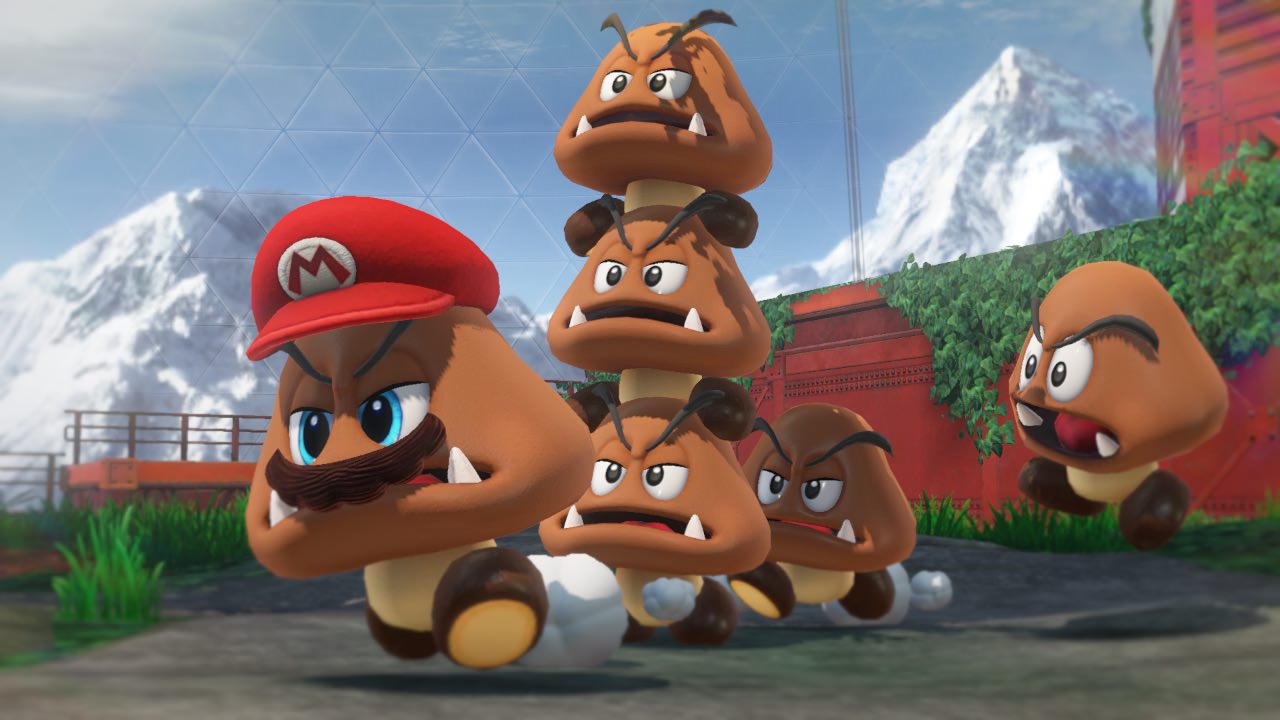 Power Moons are your main objective. As you travel from world to world, these are the most important objects needed for unlocking the next world. After a quick tutorial about your move set and how Cappy works, Super Mario Odyssey then lets go of your hand and pretty much say’s explore and play as you wish. Even though it is a bit linear, it leaves each world you arrive at wide-open. Go off in the distance and explore, find those Power Moons so you can unlock and travel to the next world. Each of these section worlds has a theme, and Bowser is looking to steal whatever object that world is most known for, for his wedding. Whether it be a cake, dress, or ring, you learn about these objects before you arrive at each world section. This is the main quest so to speak, for each world. The other quest, of course, is finding Power Moons so you can move to the next world. 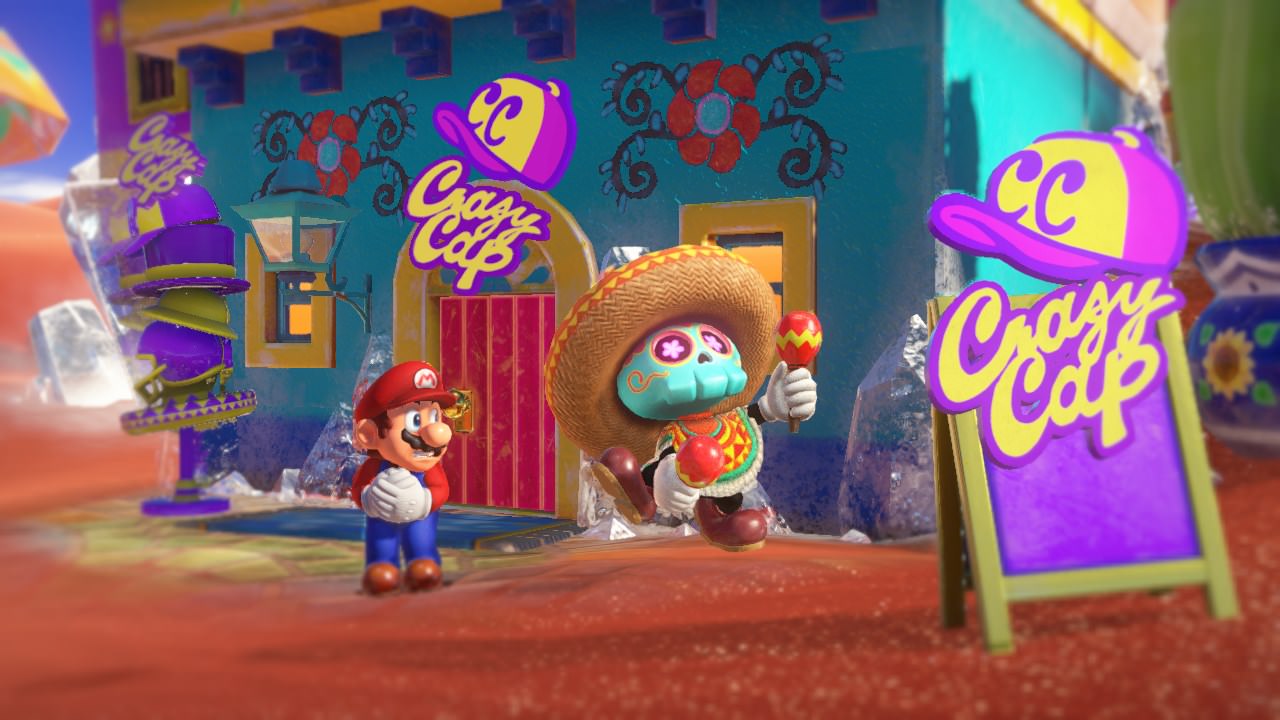 Not only do you search for Power Moons, but you can find Mario’s signature coins scattered everywhere, along with world-specific purple coins. These special coins can be collected and used to buy world-specific items in the shop. Each world has a shop that will allow you to buy items such as health, power moons, costumes, and stickers. Some items can be bought with coins, others must be bought with the special purple coins. Of course, finding these special purple coins is not always easy. They are well hidden or in plain sight but hard to reach. This is true for the Power Moons as well, some are given by doing quests from the inhabitants of that world, others must be found by exploring. Along with the search for Power Moons and coins, the main quest of each world ends with a boss fight. You will end up fighting one of four the Broodals, who are rabbit-like wedding planners that aid in the theft of objects from each world needed for Bowser’s wedding. 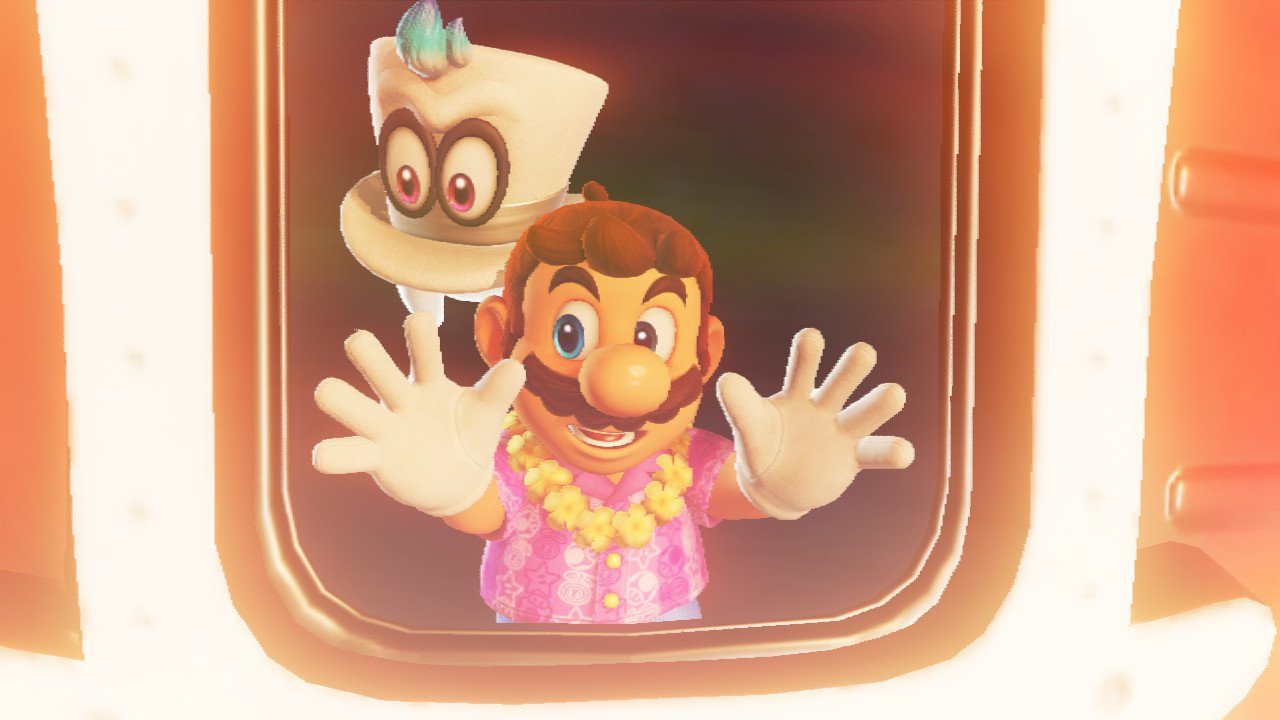 The gameplay of Super Mario Odyssey is what you would expect in a Mario franchise. From the beginning of the game, you have the full range of Mario’s moves. Along with the new elements of capturing the many creatures in the Mario universe with your hat and using them to explore areas of a world that Mario himself couldn’t reach. It is really cool to see what each creature will do when you jump inside and control them. You can even throw your hat onto a bullet bomb and control it. Really opens up the world to how you can explore it. My only gripe about the gameplay is the fact that Nintendo pushes the Joy-Con controllers in each hand as the preferred play style. When you launch the game, it sits on a screen for 30 seconds with the picture of each Joy-Con in your left and right hand. There is no way to get past this screen. You have to wait it out. I understand why Nintendo wants you to play this way. As some moves can only be done by flicking the Joy-Con to the right or left. This can be difficult to do if you use a Pro-Controller or in hand-held mode. But it is not a deal breaker, as the most important moves are performed with the buttons and not motion controls. Just kind of stinks that Nintendo had to try to force the Joy-Cons as a preferred way to play. 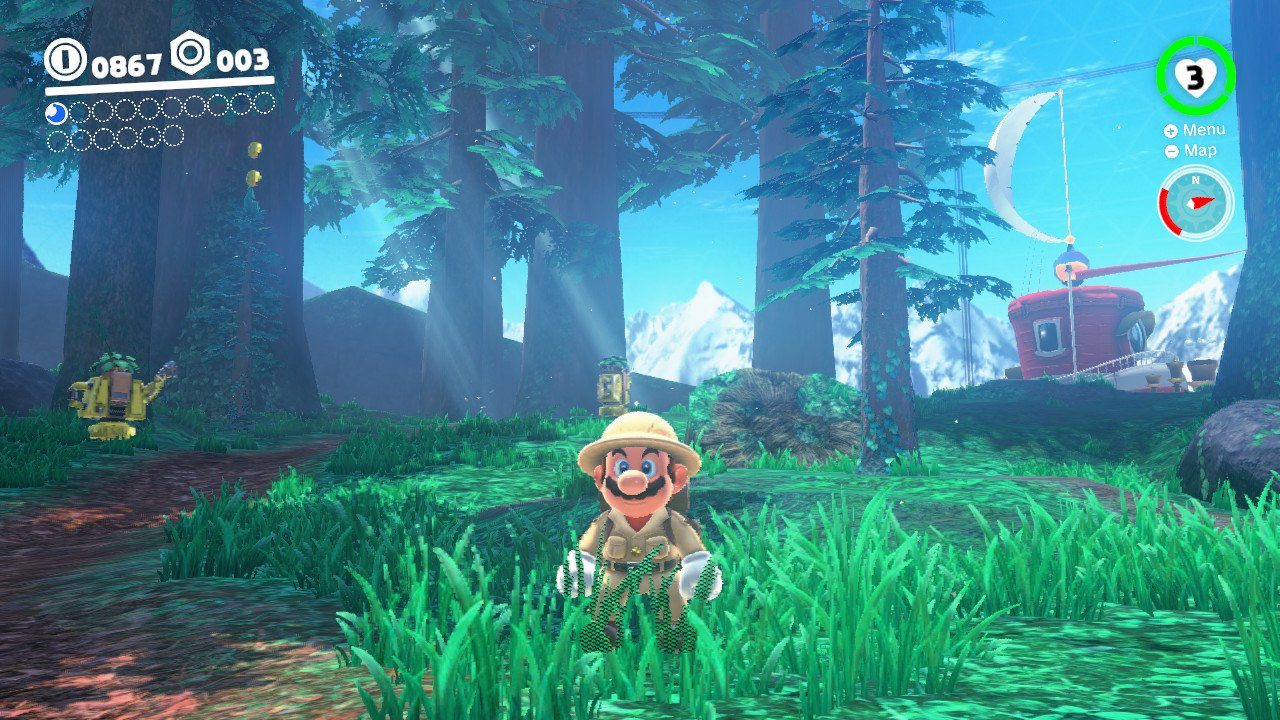 Overall I found the boss fights and challenges of each of the worlds to be rather easy to progress the story. This could be attributed to the fact that you don’t get a game over screen when you die. You will only lose some coins and start at the last checkpoint if you die in Super Mario Odyssey. But the worlds do get more challenging as you progress. Though, as each world requires a specific number of Power Moons to travel onto the next world. Finding those Power Moons were not that difficult. The real challenge of Super Mario Odyssey is in the end game. Once you beat the game you can continue your journey on finding all 999 Power Moons. Doing so will unlock a bunch of things, including secret worlds to explore. But finding all these Power Moons isn’t easy. And you can go back and play the boss fights on a harder difficulty if you so choose as well. The main story will have you find about 120 Power Moons to beat the game, which should take about 8 to 10 hours. But to find all 999, it has been said to take around 30 to 40 hours to 100% complete the game.

Super Mario Odyssey is in the ranks of Super Mario Sunshine and Super Mario 64 by allowing you to choose how you want to play the game. It may be a bit easy during the first playthrough, but this allows all kinds of players to enjoy the game.

In theory, you could challenge your self by exploring the worlds and experimenting with the mechanics of the game to find those hidden Power Moons during your first playthrough or just blow through the story then challenge your self during the end game. Either way, you choose, Super Mario Odyssey is a really fun and enjoyable game.

If you have a Nintendo Switch, I would highly recommend picking this up, as it is one of the best in the franchise.