Stellarhub is a Space Station Management Simulation game developed and published by Casualogic. The question is, is it any fun to play?

In Stellarhub you are tasked with building and running a space station in one of the many planetary systems near Earth. The goal is to survive in space without running out of food or oxygen.


To accomplish this, you must build modules that each have their own purpose. In total there are about 30 different modules, ranging from crew quarters, med-bay, solar panels, farms, research labs, and many others. But while expanding your space station, you must keep an ever watchful eye on a few key resources: Power, Oxygen, Cash, and People.

After playing a few hours of Stellarhub I quickly found that the game has too much of a focus on people management than being a space station simulation. 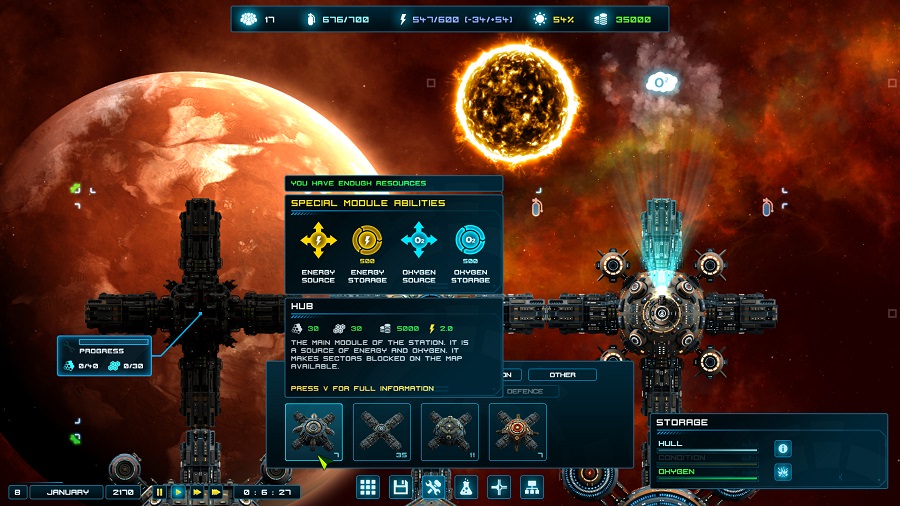 What I mean by this is the fact that you focus more on what the people want, their skills, and needs. See, each module must be run by a person with a specific set of skills. For example; mining minerals must be done by a worker who has been assigned as a miner and has the skills needed for mining. Of course, you can assign anyone to be a miner and they will gain the skills needed over time but finding someone with those skills right from the start means they will screw up less often and cause fewer accidents. Needless to say, it can be deadly if you assign the wrong person to be a medic in the med-bay; they could further harm an injured person while healing them or even kill them if they don’t have the proper skills.

Speaking of death, once someone dies on your space station, there is no way to get them back. Your crew will require modules that allow them to sleep, relax, and eat. If you don’t build these modules, your crew will quickly become depressed and over-stressed, which in turn they will start to refuse to do their jobs or do them at much-reduced speeds.

Building all these modules requires cash, resources, and power. Power can be collected with solar panel modules, and resources can be mined with mining modules and turned into metals or plastics in the processing module. Cash is one resource that can be gained a few different ways. You can gain cash through your research in the science labs, once you have researched the ability first. You can trade goods and/or produce modules for tourists. Yup, you can house tourists on your space station; they’re another group of people to make sure are happy and enjoying themselves. Unhappy tourists means a reduction in income.

The bigger your space station gets, the more complex running it becomes. Managing skill sets and roles, ensuring power and oxygen don’t get depleted, keeping tourists happy – it can quickly become a micromanagement nightmare.

Mining also requires special attention. Powering off the module allows the resources around your station to slowly regenerate. If you forget to turn those modules off then your people will mine them till they are gone, and once that happens you are shit out of luck. This plays a heavy toll on Oxygen production, as Oxygen isn’t produced by a module – you mine it.  Yes, you read right: Oxygen is something you mine from gases in space.  And, if you mine it all, then it is gone forever. If that happens then your only option is to buy it from trade hubs for extortionate sums until you run out of money and die.

The worst part is I had to Google this; not once did the tutorial say resources have to be managed by turning off the power so they can regenerate.  You’re in a constant battle between managing your resources and managing your people.  One slip-up can doom your whole station.

Stellarhub also features random events such as Pirates, Asteroids, and Sickness. Pirates and Asteroids can be defended by building defense turrets modules that will blow them up, and you can also research stronger hulls to protect your station from the impact of a stray Asteroid.  Sickness can only be deterred by producing vaccines so that your medic can vaccinate your crew. You have to tell your sick crew to go to the med-bay to get cured – they are too stupid to do it on their own. 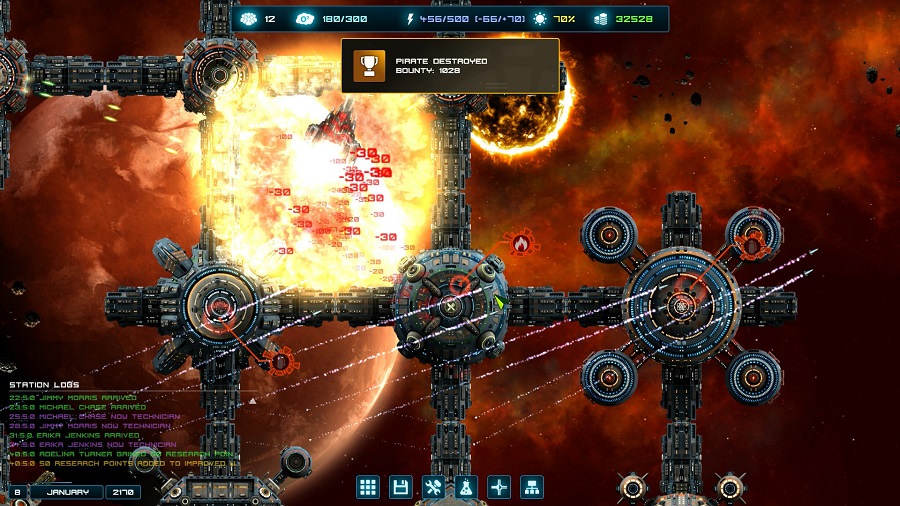 Stations are built on a grid system, which is limited by the size of the map. Each module takes up one grid space, as do the resources on the map. So you have to be strategic on with their placement.  One mistake could leave a section of your space station unprotected by your turrets or prevent you from mining a resource because another module is in the way.  Very frustrating.

Stellarhub is an interesting game, but to answer the question above, is it any fun? Not really.  I found myself getting bored after having played an hour.

Managing people is interesting, but the micromanagement becomes tiresome and you quickly realise that the AI is pretty dumb. The tutorial does not cover all aspects of the game and leaves you relying on Google to explain how to do something or why something is not working.  The lack of depth in trading was also a major disappointment.

It feels like Stellarhub would have benefited from another year of development to add more features and iron things out. As it stands now, the game gets rather boring fast and lacks depth. Stellarhub is a game I am going to have to firmly say Avoid.

Stellarhub is available on Steam for $8.99.