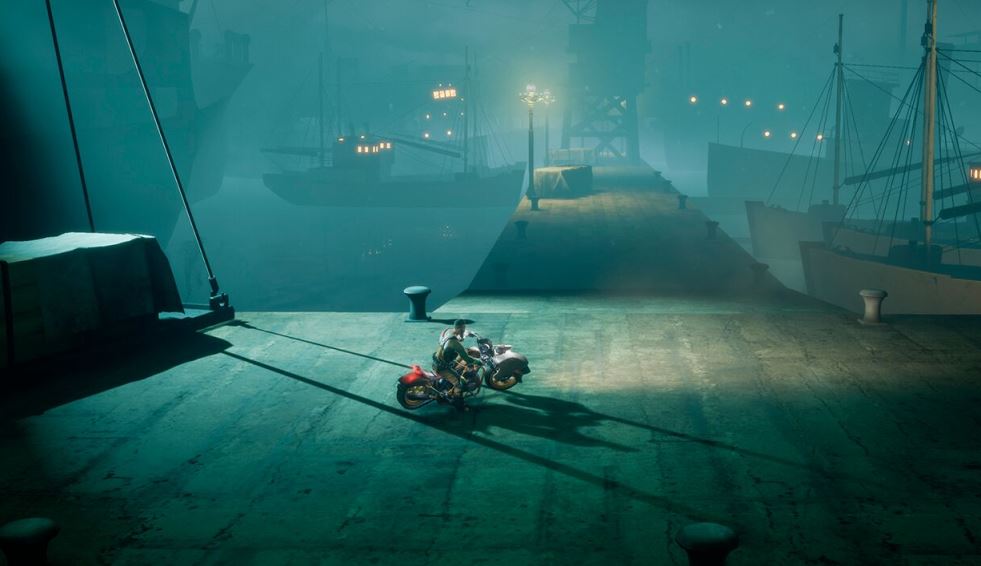 Steel Rats is a 2.5D action arcade game set in an alternative retro-futuristic 1940s America. Developed and published by the Polish game developer Tate Multimedia for PC and PlayStation 4, released November 7th, 2018. You’ll find your self as a member of a biker gang set in the fictional city of Coastal City. Meeting each member of the gang, James, Lisa, Randall, and Toshi, as you survive a Junk-bot invasion.

The main story-line of Steel Rats is rather simple. You start off as one of the members of the gang heading back to their hideout to find no-one is there. As you make your way through the hideout it quickly becomes clear that something isn’t right and you are attacked by these Junk-bot robots. From there you have to escape the city and find the junkyard as of course, this is where all the Junk-bots are coming from. As you make your way through the city of Coastal City, you’ll meet and play as the other remaining members of the gang. Together you’ll have to survive this invasion and stop whatever it is from taking over the world. 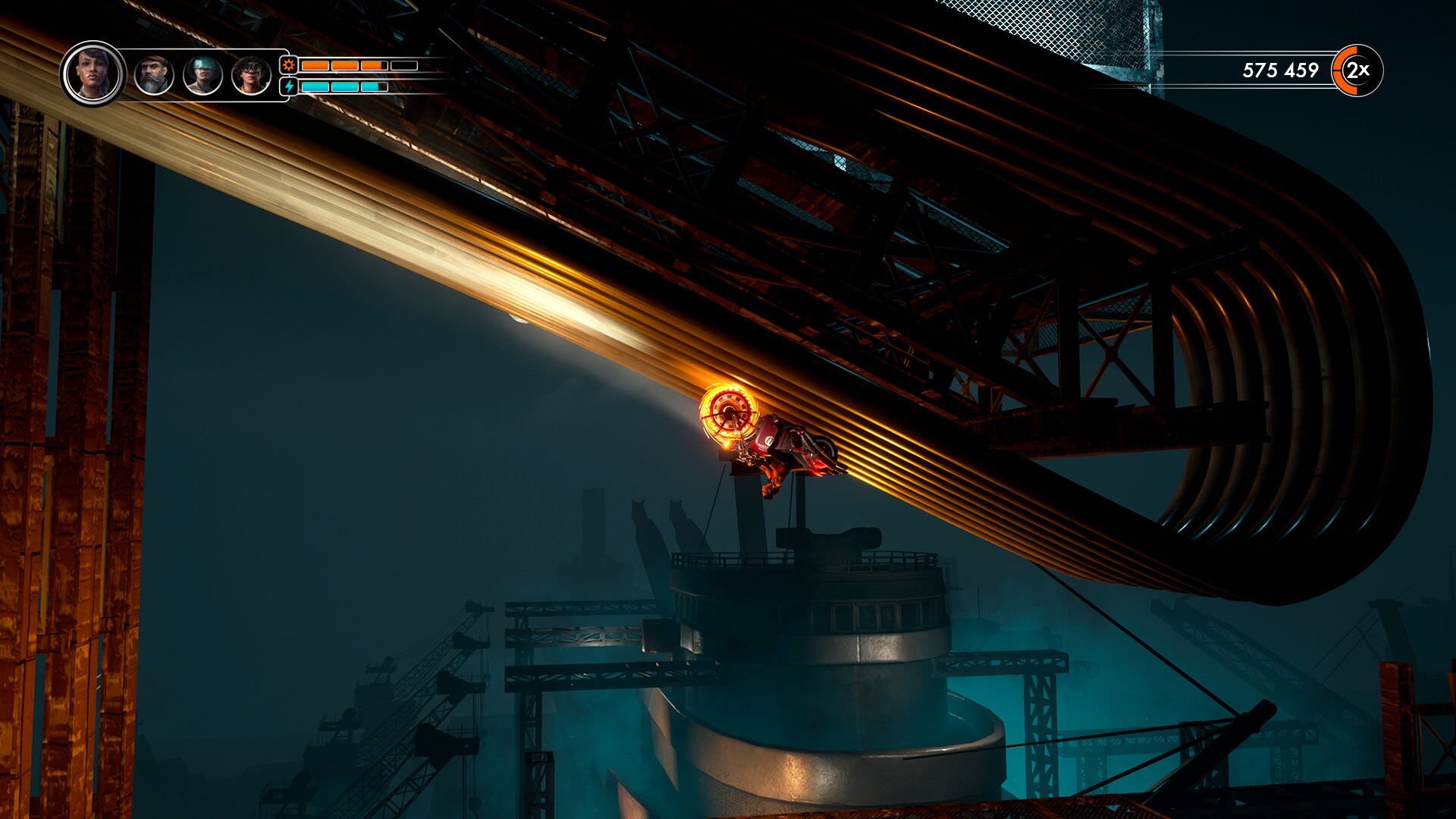 The graphics in Steel Rats is a site to see. They are impressive for a 2.5D side-scrolling action arcade game. Everything from the background imagery to the Junk-bots themselves. Even the special effects look appealing to the eye. The game runs smooth as you zoom your way through the levels. Overall I didn’t have any issues or complaints with the graphics in Steel Rats. I rather enjoyed what I was looking at while playing.

The music in this game is awesome. I love the soundtrack, even the song that plays at the menu screen. It fits the game well and is enjoyable to listen to while playing. The sound effects are spot on. Everything from the gunfire, to chain blades spinning around your front tires, match perfectly to their animations. Even the Junk-bots sound cool. Lastly, the voice acting is pretty good, but nothing to get overly excited about. I felt the actors did their job well and delivered the lines in a believable way. 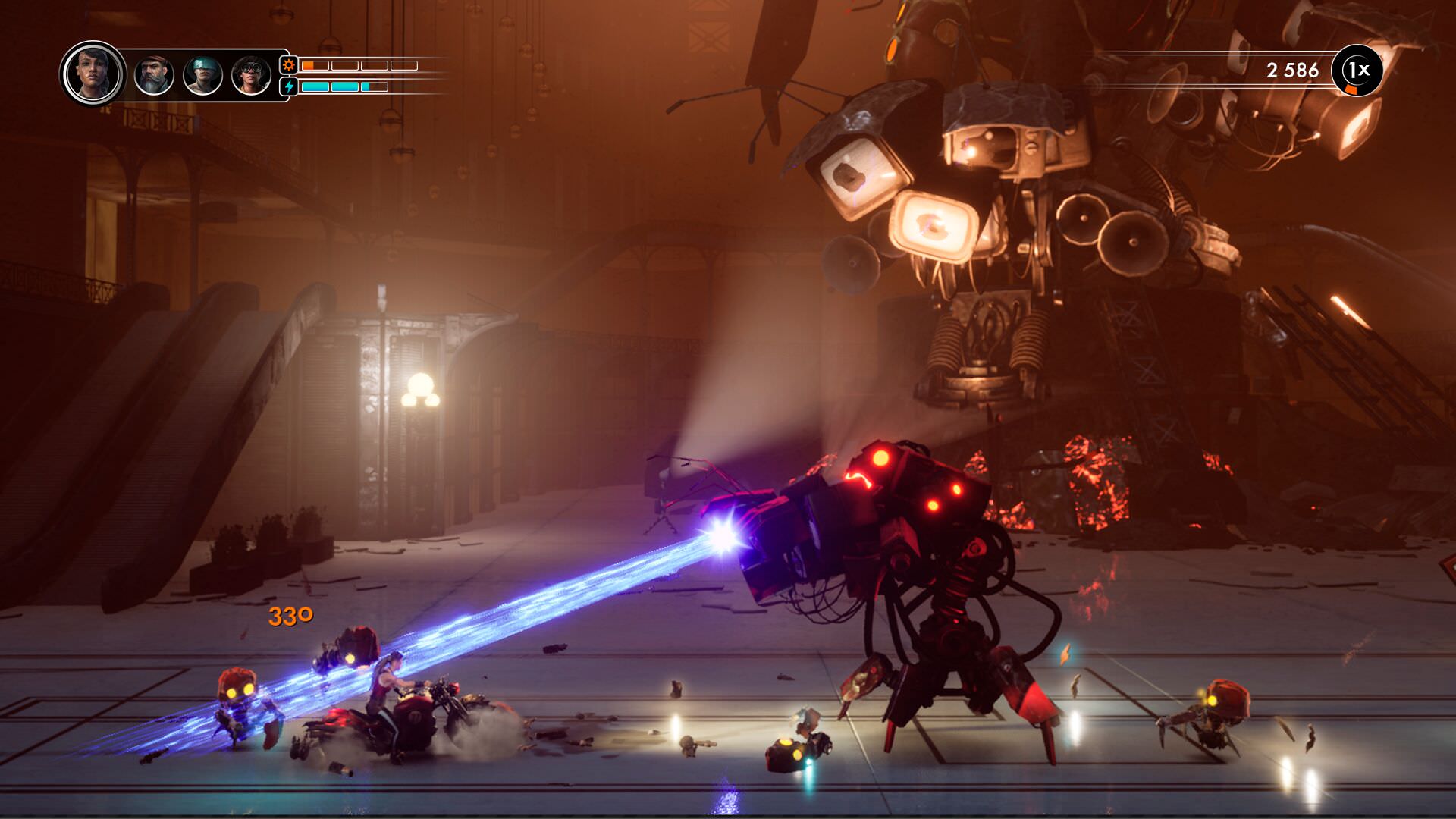 Steel Rats plays as a 2.5D side-scrolling arcade game where you ride on your motorcycle the entire time. Each of the four members of the gang has their own special abilities. Toshi has a hacked Junk-bot that can electrocute enemies. Lisa shoots fire out of the sides of her bike. James has a hammer like slam ability. And Randall can shoot out chains to grab hold of the Junk-bots.

You can switch between the four characters on the spot as long as they are available during the level. Even though each of the bikers has their own special ability, every character can pick up guns to use and use the blade attack on your front wheel. The blades on the front wheel not only can be used to attack the Junk-bots but can also be used to speed up and grip to the walls to climb the levels.

Each level has a start to finish and if you lose all your lives you have to start the level over again. The levels are pretty varied but sometimes can repeat in terms of looks. The developers did a good job providing different challenges to overcome during your play of each level. Some levels have you climbing walls to get away from a huge Junk-bot. Others have some challenging platforming to overcome. Some of the levels can get pretty frustrating with the controls but aren’t to bad.

After each successful run of a level, you go back to the main screen where you can choose the next level, upgrade each bikers special abilities, and unlock skins and outfits for your bikers. It costs nothing to select a level, but upgrades and cosmetic items cost points. Thankfully these are not micro-transactions, all the points you earn are done by completing each level and finding secret areas in a level that provide bonus points. So all the points you need will be gained in the game. Steel Rats is about 6 to 8 hours long depending on how fast you complete the levels. If you are really good you could even complete the game faster. 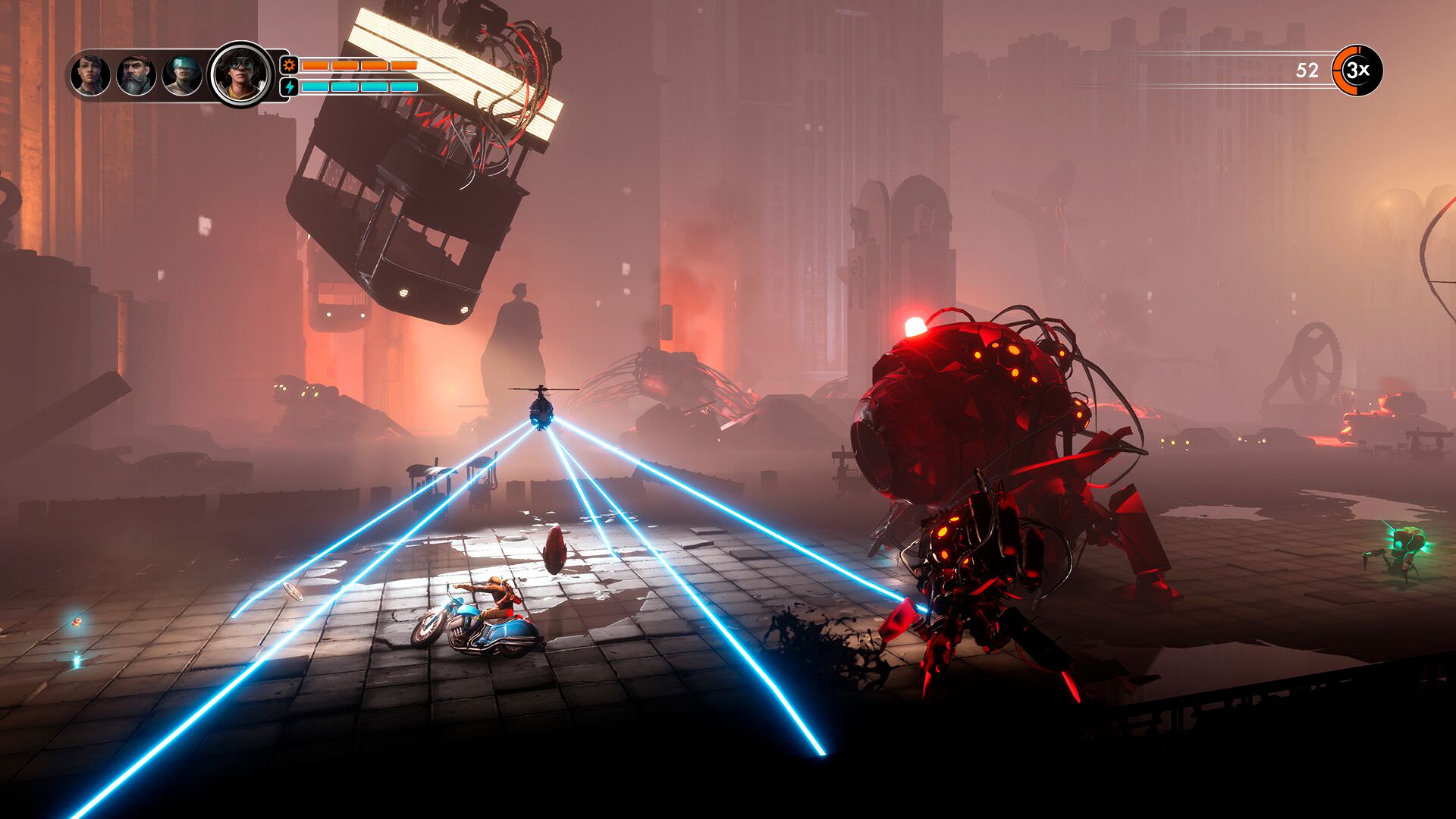 Overall I rather enjoyed playing Steel Rats. It was a fun 2.5D side-scrolling action adventure. Though at times I got a bit frustrated with some levels, only due to the controls. They can take a bit to get used to and your bike feels like it can float, doesn’t always feel heavy like it should. Didn’t run into any game breaking bugs. Was able to complete my play-through with no issues. The only issue I found was when you complete a level and go back to the main selection screen, it doesn’t automatically move onto the next level. You have to move and select the next level. This can be a bit of a pain if you just want to jump into the next level quickly.

I feel for the price tag, Steel Rats is worth picking up if you like 2.5D side-scrolling action arcade games. Steel Rats is a solid game and is a fun little distraction to all those same feeling AAA games. I recommended picking up this title if you need a little something different in your gaming life.