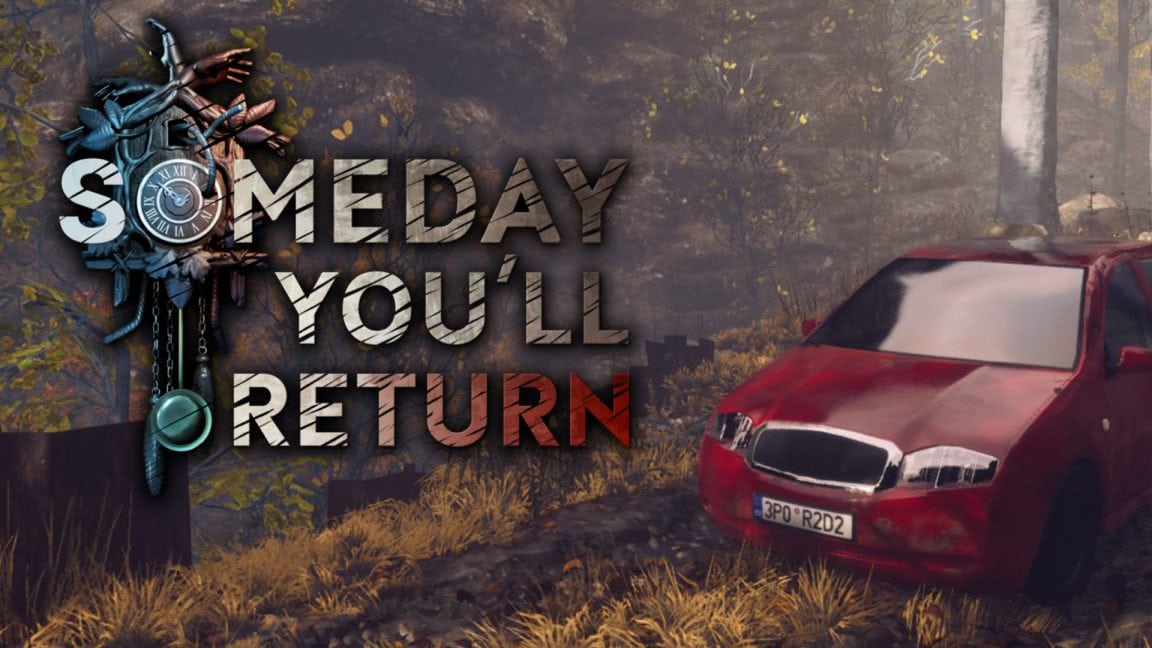 In recent years, I’ve become evermore enthralled by narrative-driven ‘walking simulator’ titles. I almost hung up my multiplayer hat in favour of the games that weave a wonderful story. Some of the more memorable titles from this niche were: What Remains of Edith Finch, Gone Home and Everybody’s Gone To The Rapture. Now, I’ve stumbled across Someday You’ll Return, a psychological horror slash walking simulator built by two-man Czech development team, CBE Software.

How can a psychological horror be a walking simulator?

Enter our hero, Daniel. He’s hot on the heels of his escapee daughter, Stela – she’s run away from school and headed deep within a mysterious forest region. It’s worth noting the very cool fact that this forest is actually a real life Czech setting, Moravia. In Someday You’ll Return, the player assumes control of Daniel on his path through this region, fighting desperately against mystical forces, almost-unseen beasts, and his own flailing sanity.

Well, I say fighting – it’s one of those where you can’t really fight back. This is step one on the path to a walking simulator: give the player no way to defend themselves. However, it’s worth noting that CBE have tried their best to pull away from being strictly labelled a walking sim. They’ve threaded the gameplay through with jump scares, tension and enough mystery and intrigue to keep the player on their toes.

Is this enough to set the game apart from its kin? I’d say maybe, but the vast amount of your play time will be spent trudging through forests and a scattering of location-generic scenes such as chapels, summer camps and a castle. 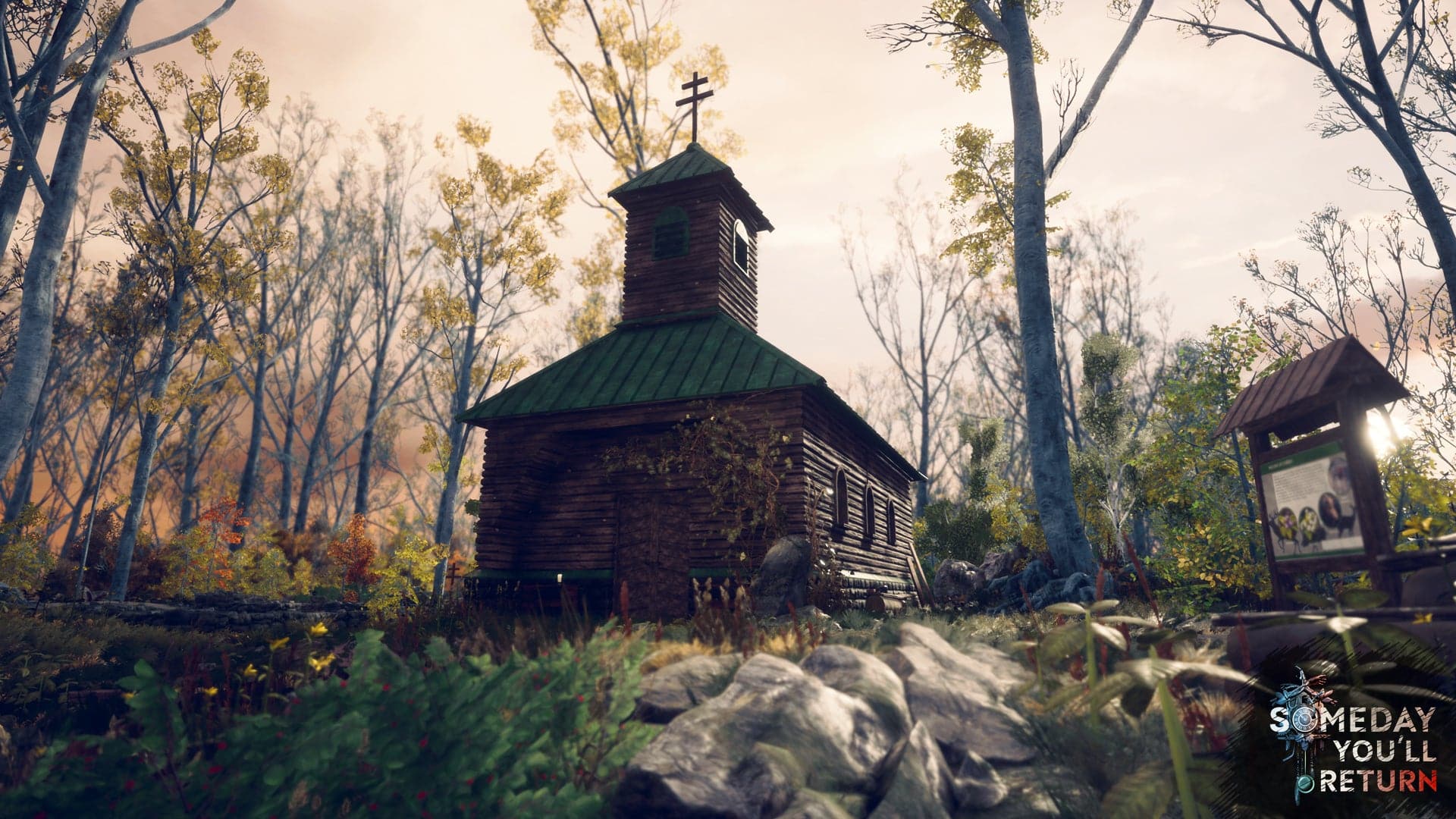 The scenery is beautiful, but quite confusing.

As you can see from the imagery provided, Someday You’ll Return has some stunning visuals. The forests feel immersive and realistic, with plenty on offer in terms of exploration. The development team have considered the smallest details in the surroundings and – at least for a few hours – it’s a wonder to look upon. However, I found that it was far too easy to become lost while trekking from objective to objective.

This game has been stripped back to its bare bones and has no HUD. There are sporadic aids to navigation, such as signposts and trail markers, but that’s it. It can easily become frustrating if you lose your way on the hunt for your daughter.

I played Someday You’ll Return on PC and while it looked wonderful, it didn’t run all that well. I had issues with frame rate drops which unfortunately impacted my impression of the graphics around me. There was some texture pop throughout, and when approaching a larger area the game would lag somewhat. It’s a longer title, but how goes the journey?

One of the key factors of walking simulators is that they’re often very short and sweet. They take, on average, around five or six hours to complete. If you drag it out, you risk making your players bored – it’s that simple. Someday You’ll Return has a few extra features that make the game seem a little more immersive, but they don’t run too deep.

The player is given the ability to collect herbs and flowers to brew various ‘potions’. These nondescript drinks usually serve a one-shot purpose and are quite linear, meaning this feature is only really used when the story requires them. There’s also several scenes that require elements of problem solving and investigation, aided by an in-game toolkit. As an example, you’ll be given a broken ladder and will need to figure out how to repair it. In another scene, you need to prise nails from a box to open it.

It would be dishonest to say these elements didn’t become tiring quite quickly.

It’s an unfortunate fact, but Someday You’ll Return does contain a lot of repetition. There are some interesting puzzles to solve and quite a compelling backstory to read through in places, but for the most part it can be a droning chore.

So, what’s the verdict on Someday You’ll Return?

Someday You’ll Return is by no means a failure. The stop-start story is fairly well written and plays its cards close to its chest for the majority of the title, giving nothing away. However, there are a lot of mechanics that stand out as underwhelming, poorly constructed and frustrating. I was left far too many times out in the cold while trying to desperately figure out where to go next, or how to solve a particular challenge.

It’s well worth a play if you’re into this kind of game, but the 16-20 hour lifetime of the game can be a little heavy. It wouldn’t be an issue usually, but 80% of those hours will be spent just wandering around a seemingly endless forest. Another issue I have with the title is its price point: almost £30 at launch. This is steep considering it comes from an almost unknown developer and offers nothing in the way of replay value or expansion.

If you’re interested, I’d say to hold off for a while until there’s a price drop.