BY OLIVER ROBINSON: If there’s one aspect of the indie game scene becoming more prominent in recent years that I’m especially grateful for, is that it led to me getting exposed to rogue-likes. From a genre that I’d never heard of before, to games like The Binding of Isaac and Enter the Gungeon being among my favourites of all time, the rogue-like has really established itself as an almost speciality of the independent developer scene. And that’s really where Skul the Hero Slayer comes in. Does it hit the dizzying heights of the games mentioned prior? No, not quite, but there’s definitely a lot of potential.

Skul the Hero Slayer is less of a pure rogue-like, and more an action-platformer with rogue-like features. Released on the 20th January, it has you take control of a cute little skeleton boi, and charges you with saving the ‘Demon King’ from the attacking humans (in a nice little role reversal, the humans of the game seem to be the aggressors, invading the demon’s land immediately after signing some sort of peace treaty.) During your many runs, you’ll meet big trees, angry maids, and at least one big spider lady, all in your mission to defeat the mysterious ‘Hero of Caerleon’ and save all your demon/tree/spider friends.

So let’s get this out of the way right now. Skul looks great. I’m admittedly a bit of a sucker for pixel-graphics, but I don’t think it’s controversial to say that one of the things that first drew me to Skul was just how… well, good it looked. Special mention goes to the backgrounds of the stages, especially the second stage, set in a rose-tinged castle with light flowing through the open windows. All of the stages seem to ‘pop’, and they’re all very distinctly different. The helpful companions you meet along the way are much in the same vein; colourful, clear, and with very distinct personalities. The music as well, although I would say it is quite understated for much of the game, is something to praise. The tracks that play through the levels tend to stay in the background, calmer and sometimes even serene – but always there. When you do reach the mini-bosses/boss of that stage though, the music shifts to something far faster, intense, and a heck of a lot more dramatic, very much matching the increasingly frantic action of each boss fight. 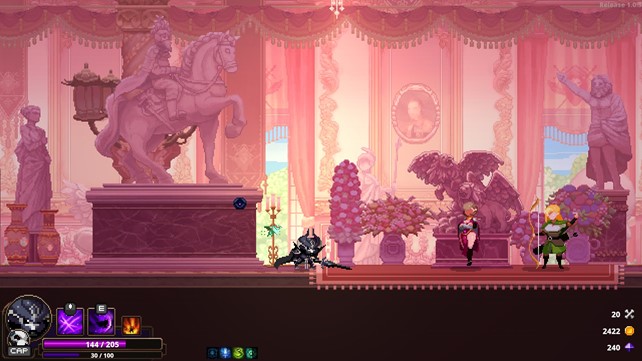 But enough about graphics and music; how does the game actually play. Well, I’m pleased to say that the game, as well as looking and sounding great, plays pretty darn well as well. Much of the combat felt fairly familiar to me when I first opened the game – you have your basic attack and one or two special attacks. Though none of these are often particularly exciting at the beginning of a run, the fact that the game responds so well to anything you throw or swing at an enemy makes even early-run combat far more satisfying than it is potentially grinding. That being said, if that was all there was to Skul, then I probably wouldn’t be writing such a positive review of it. No, Skul really starts to come alive once you come across your first… uh, skull. See, the main gimmick of Skul is that, as a skeleton, Skul himself is able to remove his head and swap it for a new one that he may have found after clearing a room. Every new skull that you find has different abilities and passives, potentially changing how you approach the next room. So, for example, you may clear a room and pick up say, the Thief’s head. This head, when equipped (as Skul can store 2 skulls at any one time, and swap between them whenever, cooldown permitting) gives Skul different special attacks, as well as making him move faster, and gives him a small chance to steal money off of enemies when attacking them. He also runs like Naruto with this head, if you’re into that sort of thing.

I should say as well, each skull also changes the appearance of Skul himself, which very importantly aligns with Oliver’s philosophy that if your game involves picking up new cosmetic-looking items with new abilites and such, you should be able to see a visible difference in your character before and after equipping it (looking at you, Marvel’s Avengers.) 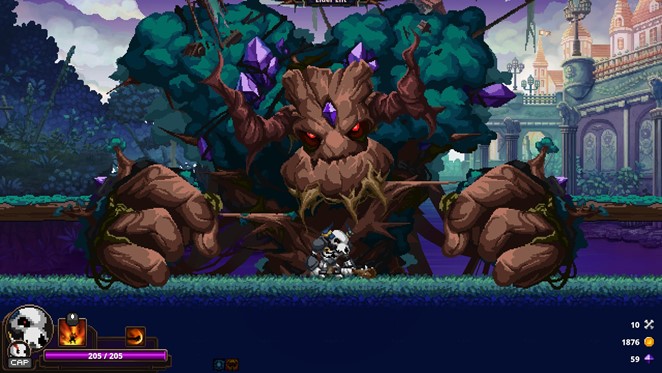 I should say as well, the different skulls are separated into different rarities, and when you find a ‘legendary’ skull it feels, well, legendary. I don’t know if I’d necessarily say any of these super-powerful skulls are run-winners in themselves, but they’re certainly a step above the more common skulls. That being said, these skulls are also pretty suitably rare, in my time spent playing the game so far, I have encountered only a couple.

Ultimately switching between heads quickly and regularly is really the key to success in Skul. Switches are placed on a cooldown, but it’s quite a short one, and the game clearly wants you to be switching skulls, using their abilities, and then switching back as much as possible. It actually reminds me of Dead Cells a little bit in that that game also actively encourages you to use your special moves as much as possible by putting them all on pretty short cooldowns. This system does a good job of keeping combat as fresh as possible, and it really did keep me coming back.

That being said the combat does sometimes run into the issue of giving the player too much to deal with. On one hand I do appreciate that Skul clearly has no qualms about being known as a hard game. It really doesn’t pull its punches when it comes to spawning wave after wave of enemies, even in the relative early game – but whilst this definitely keeps you on your toes at all times, it did sometimes lead to me being completely unable to tell exactly what types of enemies had spawned, as well as exactly where I myself was, which has led to some rather abrupt ends to runs that haven’t felt entirely deserved. Other than that the story itself is fairly standard – there’s nothing egregiously bad in it, but at the same time there’s nothing groundbreaking there. It’s pretty simple, and you can probably guess what the twists are going to be after the first couple of cutscenes.

Those negatives shouldn’t put you off giving Skull a try though. The game itself is only in version 1.0.2 at the moment, and the developers have already acknowledged several of these issues themselves and pledged to correct them. Here’s hoping they’re able to do that, and make even more improvements, because I’ve had a lot of fun already with Skul the Hero Slayer, and I’m very excited as to what the game could look like in 6 months.