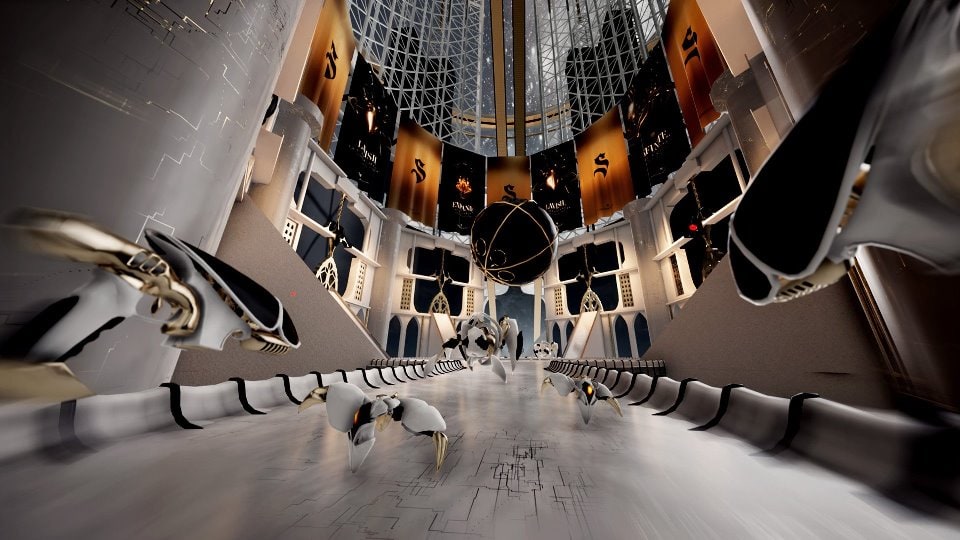 Singularity 5 is set in a dystopian Paris in the year 2050.  Players are tasked with stopping an AI uprising through five punishing levels, fighting their way through waves of bots who are hell-bent on stopping you from reaching and destroying their machine goddess.

Competing against a seemingly infinite number of VR wave shooters and sci-fi shooters on the market, Singularity 5 manages to set itself apart thanks to its impressive visuals which accompany its escalating difficulty.  My first impression was that Singularity 5 is just gorgeous.  The visuals are clean and as detailed as they need to be to create a stylish and breath-taking canvas. 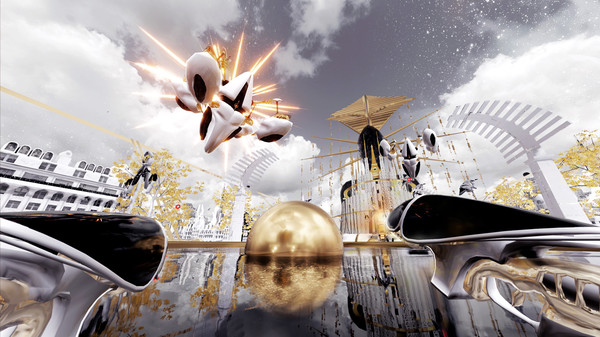 The opening stages of the game are relatively easy as players face some fairly simple static robot enemies who toss grenades that can easily be batted away.  It gives players the opportunity to play around with the core gameplay mechanics of shooting pistols and rocket launchers, tossing grenades, blocking projectiles and physically ducking and dodging threats.

Don’t let these early levels lure you into a false sense of security.

Later stages will require you to use these basic skills to perfection and you’ll find yourself having to multitask and coordinate attacks beyond what most VR games would dare to throw at you.  The number of enemies simultaneously attacking at any one time can be overwhelming and they will get the better of even the most seasoned gamers on occasion, even on easier difficulty settings.

My key complaint with Singularity 5, other than the insane difficulty, is that the story feels like an afterthought.  The developers have clearly spent the time to create a gorgeous world as a platform for the gameplay, but a stronger narrative could have taken Singularity 5 from being a great wave shooter to being a great game, period.

Despite the occasionally harsh and infuriating difficulty, there is something about Singularity 5 that I couldn’t help but love.  From the pristine sci-fi visuals to the well-tuned and precise movement, it is clear that this is a game that was well-made from the ground up, determined not to become “just another” wave shooter.

The challenge is borderline torture at times, but completing another section feels like a monumental achievement, unlike any I have yet to experience with my Windows Mixed Reality headset strapped to my face.

For the price, it is hard to recommend any other VR wave shooter or sci-fi shooter over Singularity 5.  It looks and plays like a premium title and deserves its place on your Steam library if you are even remotely interested in these sorts of games.

Singularity 5 is available on PC via Steam for £7.19.  It is compatible with HTC Vive, Windows Mixed Reality and Oculus Rift headsets.