Developed by JKM Corp, Shadow Gangs pits you, the ninja Dan and leader of the Ninja Order, against an evil group named Shadow Force. Said Shadow Force kidnapped your family in the hope of teaching you a lesson and establishing a new Ninja Order.

Mess with a ninja’s family, you gotta pay. And you make them pay the best way any ninja named Dan would.

The story is quite nonsensical and is really just an excuse for you to kick a lot of ninja ass. It’s adorably campy and a throwback to 80’s-90’s action games and movies. All the baddies you would expect in a late 80’s action side-scroller are faithfully represented. 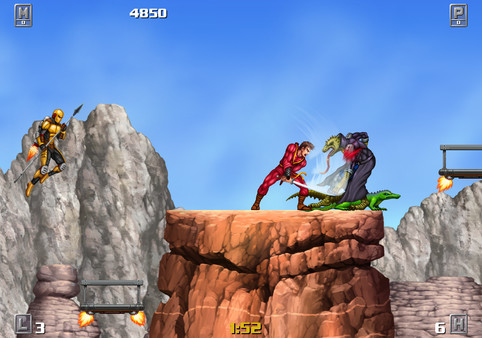 Ninjas? There’s more of them than a Sho Kosugi flick. Street thugs? Check. Lizardmen, baby dragons, kung-fu masters, and pole-vaulting Kendo practitioners (I kid you not) are also amongst the ranks, ready to make your life hell.

But is it good?

You bet your shiny katana it’s good. Shadow Gangs knocks it out of the park on many levels. The controls and gameplay are…well, it’s Shinobi. Shadow Gangs doesn’t reinvent the wheel in terms of gameplay, but that wheel runs like 24’s on a tricked-out Impala. You have a button for attacking, a jump button, a button for the ninja magic, and a button to lay mines: all of which are able to be mapped as you see fit. Like its spiritual ancestor, you’ll attack with a long-range attack when you’re far away from an enemy and automatically do a melee attack when you’re close.

The controls are simple and very responsive. And responsive controls are a necessity; this game is hard, even on the easiest difficulty level. You will struggle. You will cry. You’ll thank the heavens that Shadow Gangs doesn’t require real quarters to play. 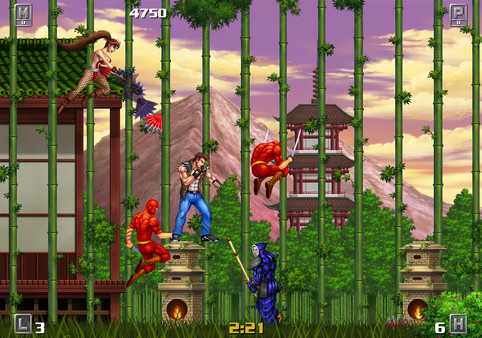 Shadow Gangs isn’t as twitchy as a Contra-style game like Blazing Chrome, but there’s enough action going on that will require heightened manual dexterity. However, like an arcade game, Shadow Gangs is all about pattern recognition and memorization. None of that procedural generation stuff here. Once you know what to expect, your chances of survival increase considerably.

The game recommends that you start on the Rising Ninja difficulty, and I second that recommendation. The Crimson Ninja difficulty is touted by the developers as the true Shadow Gangs experience: more and faster enemies, one-hit kills, no continues. You’ll need to be intimately aware of the game’s mechanics and enemy placement if you want to make any sort of progress. Shadow Gangs was designed to be arcade-hard, and it may be a turn-off to players who aren’t used to such crushing difficulty.

A trip down memory lane

One of the things I really enjoy about Shadow Gangs is how unabashedly ridiculous it is, and I mean that in the best way possible. It’s a loving tribute to one of the seminal arcade action games of Generation X. Shadow Gangs is dumb fun and doesn’t try to be more than what it is. The ridiculousness is the beauty of the aesthetic. 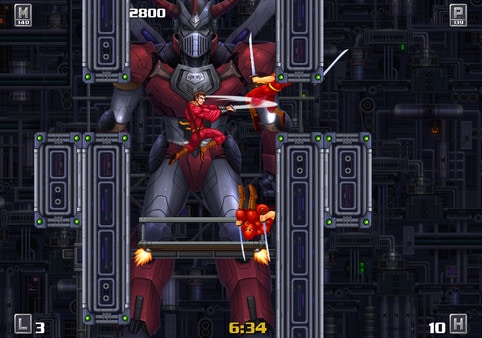 You can see that in the music (which has an 80’s inspired metal theme and is really good), the character design, and the gameplay. Shadow Gangs is a reminder of how great it was to blow your allowance in the arcade and how it felt to have the high score for all to see. The game has subtle nods to other games like Fatal Fury, Bad Dudes, and Final Fight.

Shadow Gangs scratches the arcade itch for sure. It does what it does and does it well. If anything can be considered a downside, it’s the price. It’s $24.99 on Steam. Many would argue that Shadow Gangs should be cheaper and may balk at the pricing, considering it’s directly competing with other retro-styled games like Streets of Rage 4. It’s a valid complaint, but one that I overlooked after I made the leap.

The love and care that JKM Corp put into the game shows and is worth every penny.

Shadow Gangs gets the nostalgia right and takes me to a simpler time, a time where going to the right was the main objective. Shadow Gangs is good. Damn good.

Now if you’ll excuse me, I need to kick some ninja ass. It’s retribution time.

Shadow Gangs is available on Steam and will soon be available for Xbox.