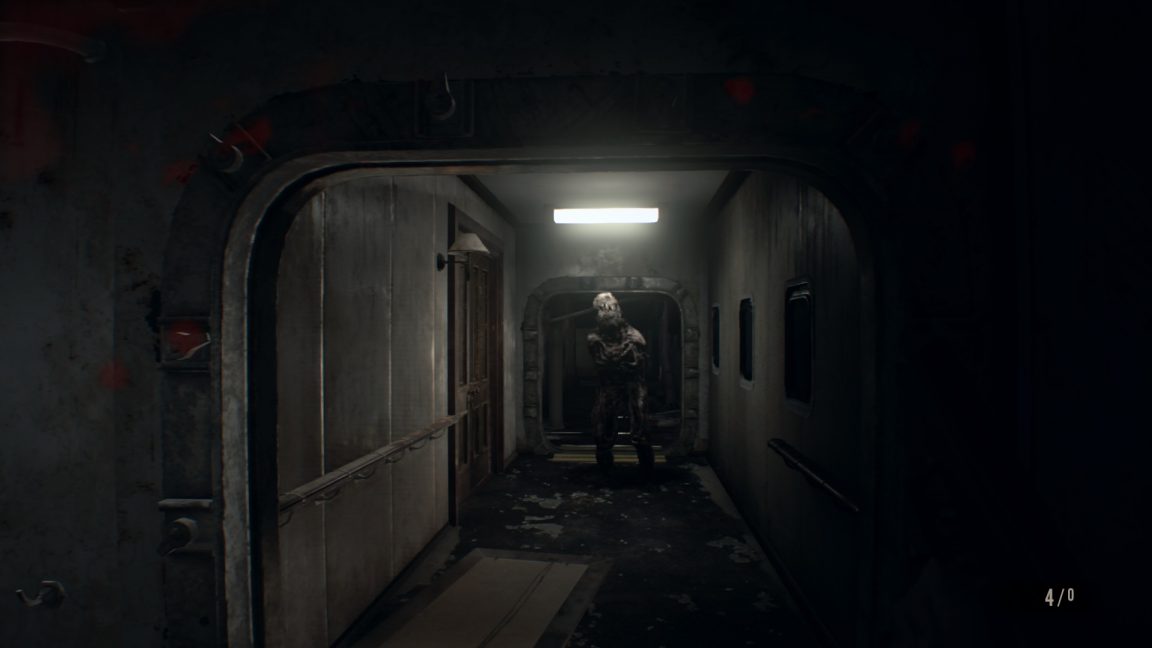 Capcom believes that Resident Evil 7 biohazard sets a new course for the Resident Evil series. But is it worth buying? Jonathan Birkenstamm gives his verdict.

Resident Evil is one of my favorite survival horror franchises. I remember standing in a video game store seeing the promotion trailers for Resident Evil 2 back in 1998. RE2 was my first game in the franchise, and it was one hell of a game. Then Resident Evil 3 came out and I was hooked. I then played the remake of the original Resident Evil on the Gamecube, along with Resident Evil 0. I even bought a Dreamcast so I could play Resident Evil: Code Veronica.

Why am I talking about my history with this franchise? Because I went into Resident Evil 7 with such a low bar. The only information I knew about this game was the E3 2016 announcement. After that, I refused to play the many demos that came out and didn’t listen to any of the promotional videos and articles about the game. I didn’t want RE7 to turn out to be another action packed video game with little to no horror.

Boy, was I wrong!

Resident Evil 7 has restored my faith in the franchise. It is a fresh yet familiar take on the franchise, and the survival horror is back. 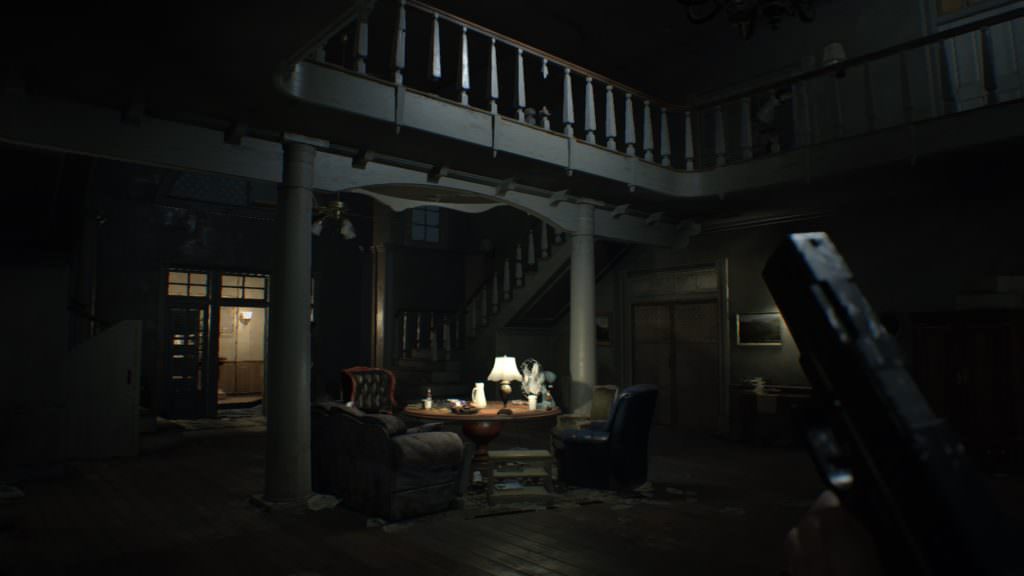 Let’s get this review started with sound. The Resident Evil Franchise has always been about good sound design, to capture that atmosphere of despair and dread. Capcom made sure Resident Evil 7 was no exception. The eerie sound effects they use really keep the hairs standing on the back of your neck. And the moody music they use throughout the game keeps your heart racing. They did such a good job with the sound effects that I often would scare myself solely with sound alone. Though, I do have to say that the sound effects are not perfect. Throughout most of the game, I would mistake my own characters sounds effects for creatures. I felt that your own sounds were just too high, and needed to be toned down. The music in Resident Evil 7, I didn’t have any issues with. It added a perfect mood to the game and like I said before kept my heart racing during the intense parts. 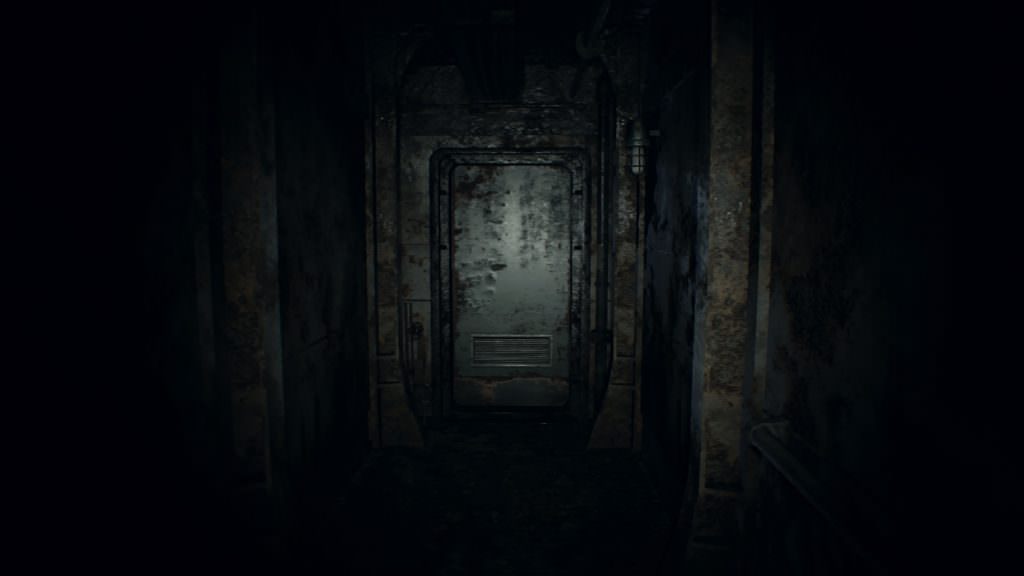 With that being said, I did notice a few bugs with the music. Sometimes it would skip, I don’t know why but the music would skip at some points. Thankfully this didn’t happen often, but enough that I noticed it. Now the voice acting was top notch in this game. You could feel the presence of each character, even the protagonist Ethan. The Baker family for sure were the stars of the show. The voice actors for them did such a great job. The voice actor who did Jack did such a bad-ass job that I loved his character the most. Even though you are supposed to hate and fear Jack, I would sometimes find myself chuckling at his well-delivered lines. He was the comedic relief in the game but in such a sadistic yet funny way. Don’t worry, the humor wasn’t over the top. Jack is a character to fear and rightfully so, he is just funny at the right times. 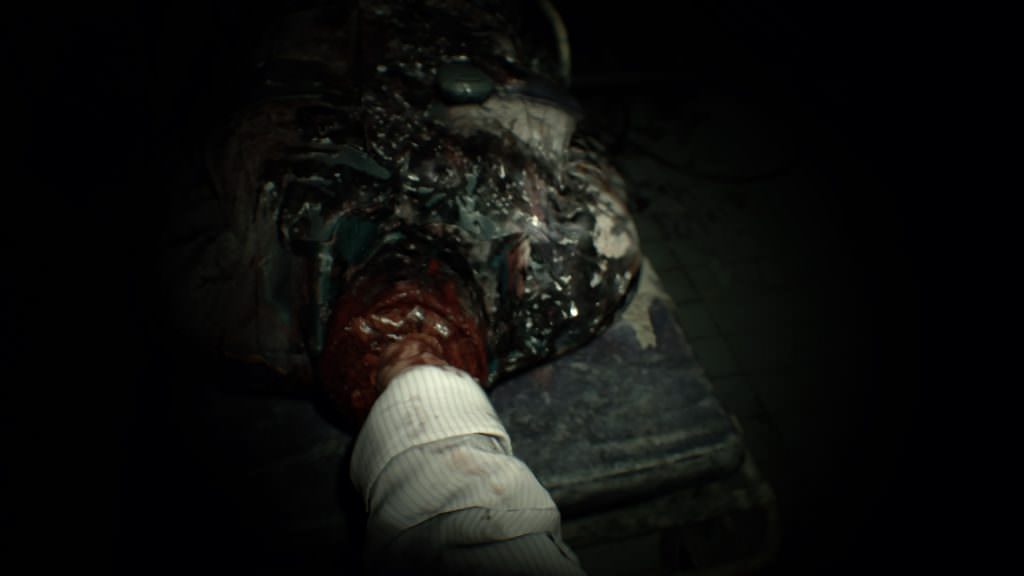 Graphics, Resident Evil 7 looks damn good. Even on the Xbox One, which was the version I played. Though it did have low-res textures at times, but no real faults here. I didn’t find any texture popping or texture tearing. The game’s graphics were solid all the way through. Everything looked realistic, from the house to the Baker family the selves. Even the creatures looked creepy, in a good way. The lighting effects were done very well too, providing that extra layer for eeriness. The only gripe I had in this department was the hair on the females, mostly your wife Mia. It just looked really odd, like it wasn’t a part of her body. It was the only thing that threw me off in the immersion of the game. Every time I looked at her, I couldn’t help but think she was wearing a wig.

Next up is the game-play. For the first time in the franchise’s history, Resident Evil 7 is played entirely in First-Person and it works. It made the horror part of the survival horror, that much more. You experience the game through the protagonist named Ethan, who is looking for his missing wife Mia. The pace of Resident Evil 7 is slowed down compared to the last few games in the series. For a good part of the beginning of the game, you have no weapons. Armed with nothing but your flashlight, you explore the creepy and disgusting guest house of the Baker family. As you progress through the game, you slowly gain more powerful weapons. The weapons themselves look realistic like they could exist in the real world. Some of them even look like they were made by Macgyver himself. Which I thought was pretty cool. No crazy sci-fi guns here. 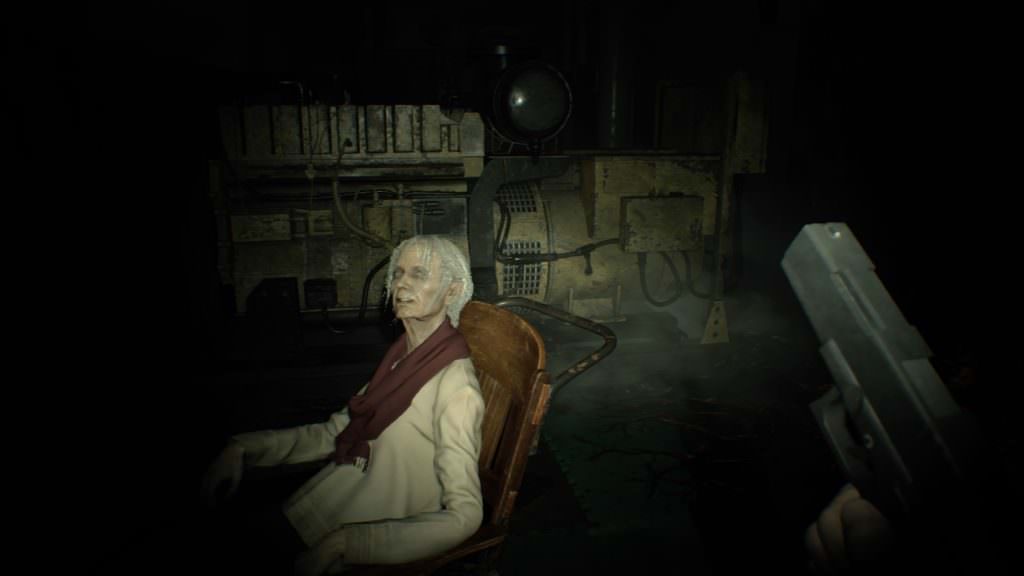 The survival aspect is hammered in by giving you limited ammo throughout the game and the constant inventory management. You always feel like you better make every shot count because who knows when you’ll find more, along with what items you should bring along during your travels exploring the Baker’s property. This gives the game that dread and despair feeling. As you explore the Baker family’s main house and other parts of the property, you come along many puzzles to solve. Just like any good Resident Evil game should have. But don’t expect anything that challenging though when it comes to the puzzles. 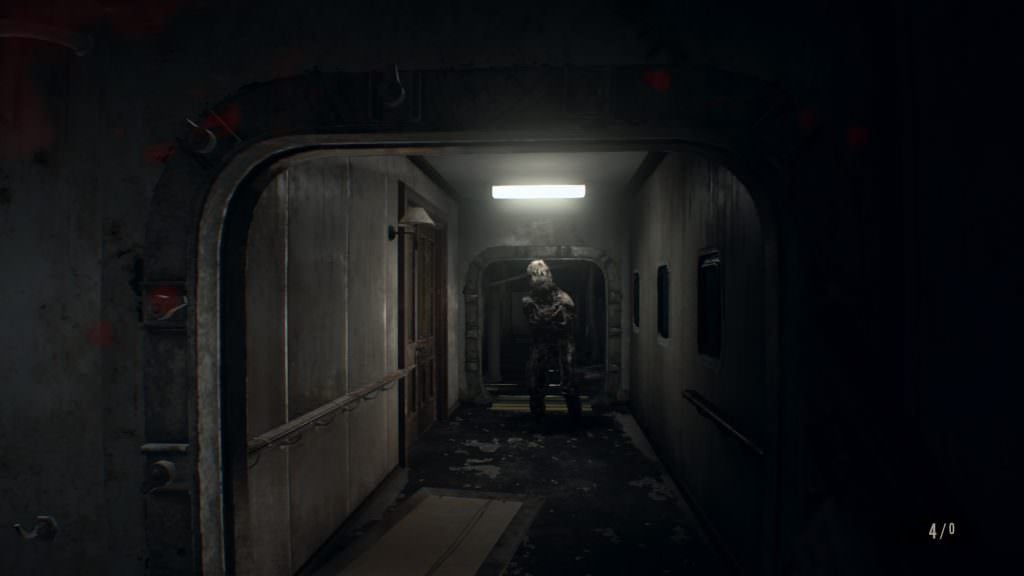 Capcom kept the puzzles fairly simple so you can continue to progress through the game without getting frustrated. This can be a good and bad thing, depending on how you look at it. I for one didn’t mind the puzzles, I enjoyed each one that the game offered. I even like how you can play VHS tapes you find throughout the house. Instead of watching a movie, the game loads up the VHS tape and you play as the person filming it. These VHS tapes offer a look into the story and even clues to the puzzles you have to solve. I like this idea, it is a different approach I haven’t seen before in a video game.

The other familiar aspect that makes this a Resident Evil game is the save rooms. That classic music plays when you find one of these rooms. It is the only time I can relax while playing Resident Evil 7. These rooms were my safe place, so to speak. Where I could collect my nerves and figure out where to go next, and prepare for the trails ahead. Because one thing Resident Evil 7 does well, is to keep you scared and afraid all the way to the end.

Gunplay in Resident Evil 7 is very solid and should be for the First-Person camera. Each gun sounds and feels great as you shoot them. Even guns you would expect to have a recoil, have it, thus making the game feel more real. Overall I didn’t have any issues with the guns in the game. 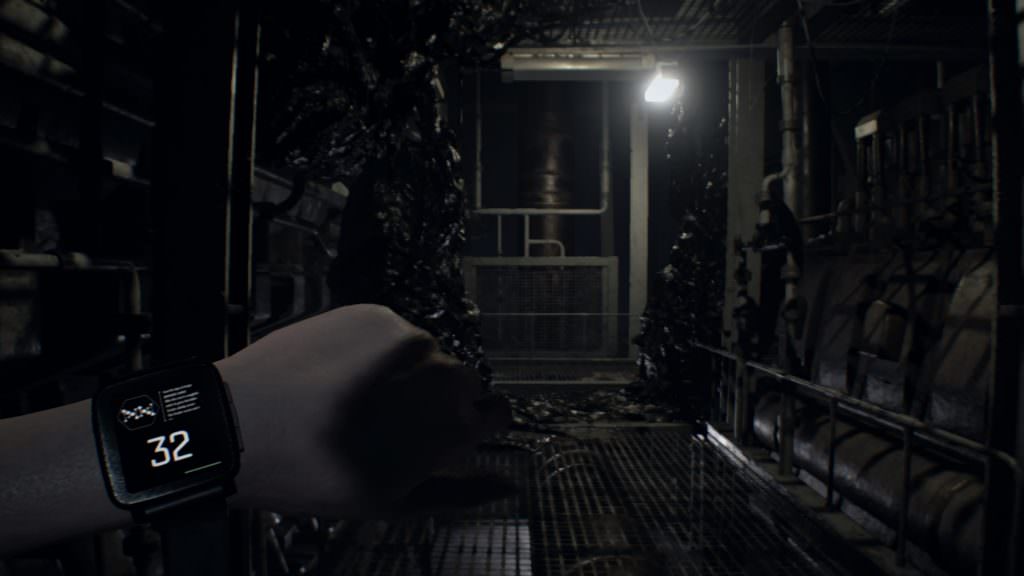 Now, how does Resident Evil 7 fit into the overall storyline with the rest of the games? Well, that is an interesting question because this is the first title to feature none of the main characters that we are all used to. But the story Capcom has created here still makes you feel for the new characters in this game. As to answer that question, how does it fit in the RE universe? I don’t want to say because it will spoil the main story of the game. Capcom does a great job at keeping you clueless on what is happening till well past the half-way point in the game. This, of course, is the driving force that keeps you motivated, trying to figure out what the hell is going on. But in the end, it does fit in the universe and has some surprises and twists that give you more questions that need to be answered, hopefully in the DLC. The good thing is, the main story has an ending. Even though there are some plot holes, the overall story ends, leaving you satisfied when completing the game (No sequel-bait here). Overall I really enjoyed the story and it’s characters. The main game will take you roughly about 10 to 12 hours to beat if you don’t rush through it. 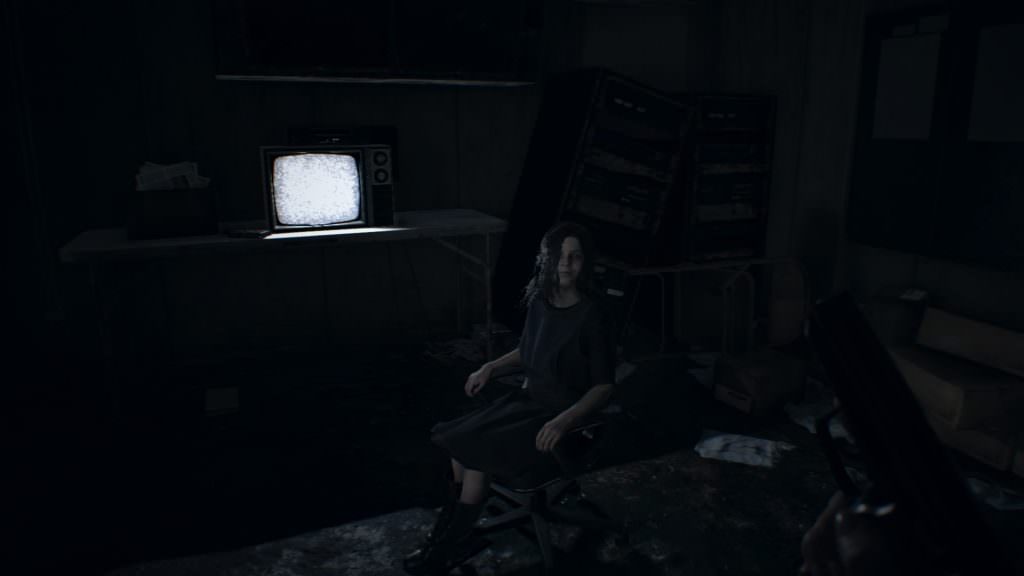 Resident Evil 7 is the game I have been waiting for from Capcom. It is worthy of being a numbered title in the franchise and is a welcome return to the franchise’s survival horror roots. I had a fun and horrifying time with this game. I couldn’t recommend it enough to anyone who is a fan of the franchise and scary games. I didn’t get to play the VR experience because I don’t own one, nor am I interested. But I heard and read from other reviews that this is VR game done right. Thank you Capcom, for such an amazing game.