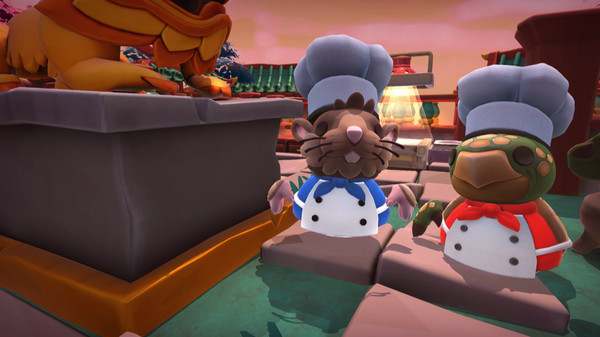 BY ROBIN GALE: At its heart, Overcooked 2 is a frantic, if sometimes frustrating, party game which is best enjoyed with friends. With varied levels, a ridiculous story (you are cooking to fend off re-animated toast – the, ahem, unbread….) and some seriously strange settings your time in the onion kingdom will be an enjoyable one. While it can sometimes be let down by awkward controls or just plain infuriating mechanics there is more than enough good here to help you overlook these small gripes.

Overcooked 2’s main strength is its absolute ridiculousness. Keeping on top of chopping, frying, mixing and serving ensures everything is suitably frantic and that’s before you even consider the obstacles the individual levels serves up.  Collapsing bridges, wizards moving tables of ingredients, crossing busy roads or cooking on an air balloon which is bursting into flames are just a tiny proportion of the hazards that are thrown at you. Safe to say, particularly as you move towards the end of the game, you never know what to expect when booting up a level for the first time. The added element of being able to throw raw ingredients makes things even more bizarre, though haphazard aiming can make this more of an annoyance than a helpful tool until you truly get the hang of it.

Imprecise controls are a key flaw, especially when utilising the “dash” capability, which can prove frustrating throughout.  In a game where a slight wrong movement is the difference between success and failure, this can get annoying. Nine times out of ten when you fail you know it’s on you, but when you feel like the game let you down it can leave a bitter taste.

While the settings make each level feel truly unique and memorable, there are other elements that mix things up. Each world offers up different menus, and cooking is surprisingly varied. As you would expect, preparing a cake or pizza is vastly different to a burger, and there are different cooking utensils to master. Do I need to fry that before serving? Does this need to go into the mixer before the steamer? Combined with the setting, the food on offer makes each section feel new and means you can never rest on your laurels for too long before another challenge is served up.

Another fun addition is the unlockable chefs sent your way after every few levels (or stars gained). While you start off with a basic roster, soon you’ll be cooking with eagles, robots or a giant mouse. While they make no difference to the gameplay, it is a fun way to add your own stamp and both my partner and I had picked our favourite chefs by the end. Hidden levels are another set of unlockables, as they don’t automatically appear when a world has been completed but require hidden objectives to be reached in specific ways. We have yet to find all of these and unlocking them adds replay value to an already lengthy game.

Unfortunately, hidden levels aside, the overworld feels surprisingly empty. There are a few added touches, your bus changes as it flies in the air or travels on water for instance, but it would have been nice to have some mini-games or more interactivity between levels. The one system in place, pushing buttons to access ramps, is so obvious and easy it feels more of a waste of time than a fun added element to the game.

For a game built on teamwork and overcoming crazy odds, the difficulty curve can also feel inconsistent. We played each level through until we gained the coveted 3 stars before moving on and while all were doable, some felt much more straightforward than others. While this will largely be down to individual playstyles, it did feel strange struggling for 30 minutes on one level to then blast through the next one first try. It was almost underwhelming when, after having to try the penultimate level half a dozen times before success, we beat the final level on our first proper attempt.

These minor gripes are easily forgotten when amid a burger-making frenzy as fires burst around you and the stone you were about to jump on sinks into lava. Overcooked 2 works best when everything is going wrong and nothing makes sense, and fortunately this is the case about 90% of the time. Whether working through each level with one or two other people or treating it like a party game with friends and a few beers, you would have to work hard not to have a smile on your face. While there are some niggles with the controls, and the overworld is a bit sparse, this is easily forgotten as you settle in for another session of cake making, boulder dodging, fire-starting madness.