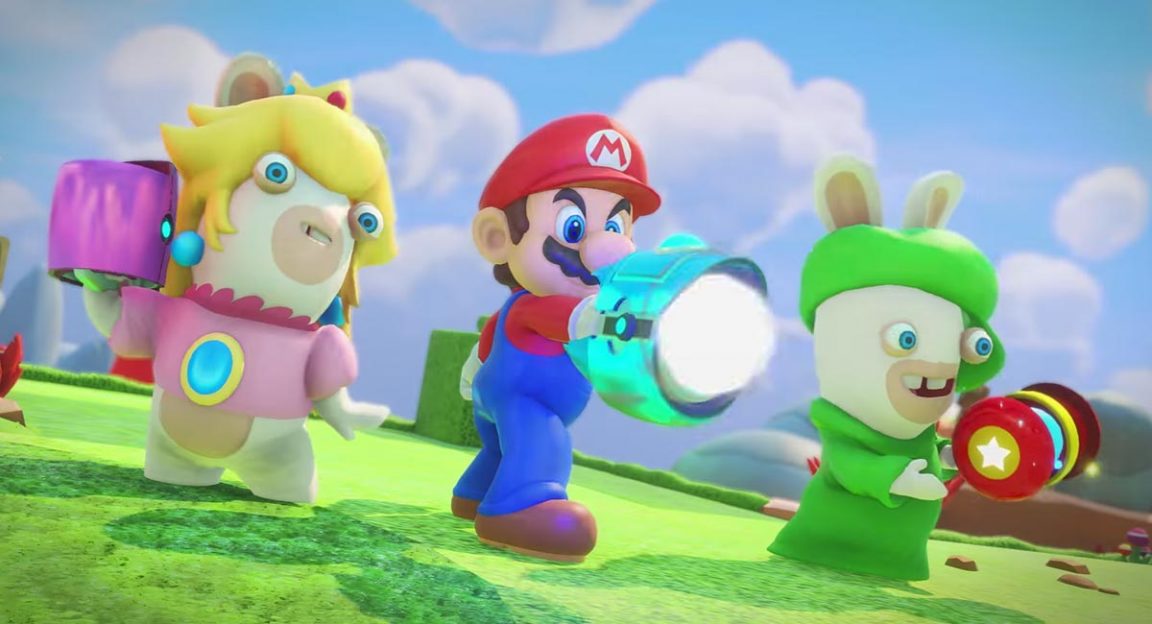 What do you get when you combine Nintendo’s Mario universe and Ubisoft’s Raving Rabbids? The love child, known as Mario+Rabbids Kingdom Battle, a XCOM like video game with puzzles to solve and crazy and goofy things to laugh at.


It all begins with a young girl, who is a fan of the Mario franchise, working in her basement with her assistant, an AI Roomba like robot named Beep-O. She is finishing her latest creation called the SupaMerge helmet. This device can merge any two objects it targets into a single entity. The SupaMerge is the main plot device throughout this game. Of course, once the young girl leaves her basement, the Raving Rabbids show up through a washing machine time machine. Doing as these Raving Rabbids do, they mess around in the young girl’s basement and stumble upon the SupaMerge device. One of the Rabbids uses it to merge some of the young girl’s Mario franchise items with some of the other Rabbids, creating Princess Peach Rabbid and Mario Rabbid. While this Rabbid keeps messing with the SupaMerge device he accidentally hits the Time Washing Machine they all came in. Once doing this, the Time Washing Machine starts to suck all the Rabbids, Beep-O, and the girl’s stuff into a dimensional vortex. Of course, this vortex then merges with the Mushroom Kingdom and dumps all the Rabbids and the girl’s stuff there. Mario is once again thrown into saving the Mushroom Kingdom, but this time from crazy Rabbids and a scared Rabbid whom has merged with the SupaMerge device. 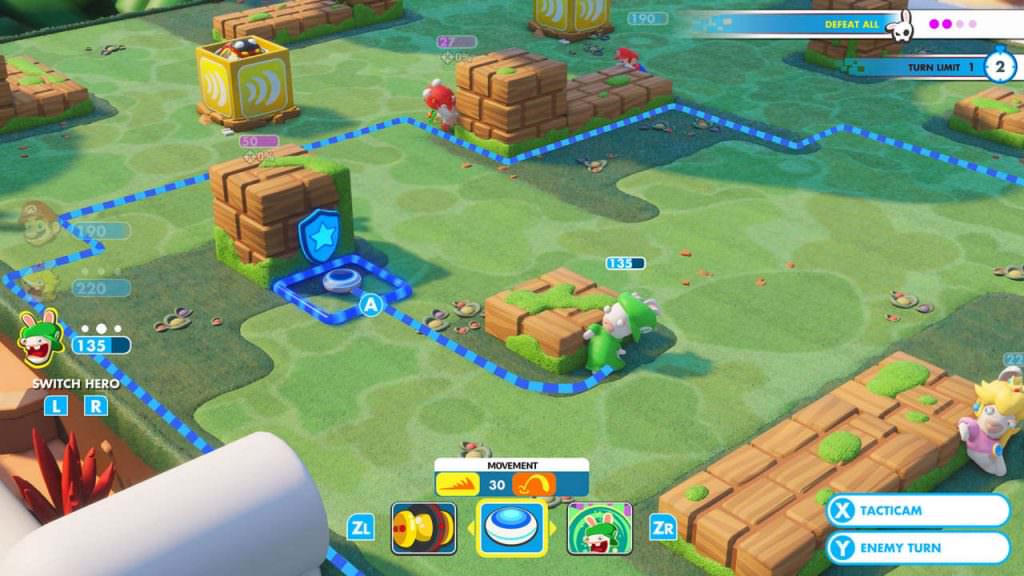 You start the game off with only three characters, as the others have been spread out across this newly merged Mushroom Kingdom. The three characters are Mario (of course), Princess Peach Rabbid, and Luigi Rabbid. As you explore the worlds you will find and recruit the other characters including; Yoshi, Mario Rabbid, Luigi, Princess Peach, and Yoshi Rabbid for a total of eight characters. But you are only allowed to have three characters selected for your team at any time. The one thing I was annoyed at with my team selection is the fact that Mario has to be in your team no matter what. So really you can only swap out two of the three team members.

Technically there is a fourth member of your team, Beep-O. But he cannot be used during combat. Beep-O is only used to travel around the world maps and help you solve the many puzzles keeping you from getting from point A to point B. As you explore each world, Beep-O can be upgraded with new abilities that will allow you to reach areas of the worlds you couldn’t have before. But these upgrades are only given to Beep-O at certain times during the story-line. The only characters that can be upgraded as you wish are the main eight combat characters. You collect orbs, which are either found in the world or earned after winning combat sections. These orbs can then be spent on skills for each of the eight characters. All of whom have their own unique style of combat.

Speaking of combat, the meat, and potatoes of Mario+Rabbids Kingdom Battle. While exploring each of the four worlds, you will solve puzzles and run into combat sections. The combat sections will have its own set of challenges to overcome. Some combat sections will ask you to defeat all the enemies or some will ask you to at least make sure one of your team members makes it to a safe spot in order to win. Another challenge asks you to defeat a certain amount of enemies in the section before the battle is won. Once you complete any of the combat challenges, you will then be rated on how well you did base on how many turns it took you to complete the challenge, and if any of your team members got knocked out. Based on this rating the more or fewer coins you will get, coins can then be used to purchase weapons for your teammates. 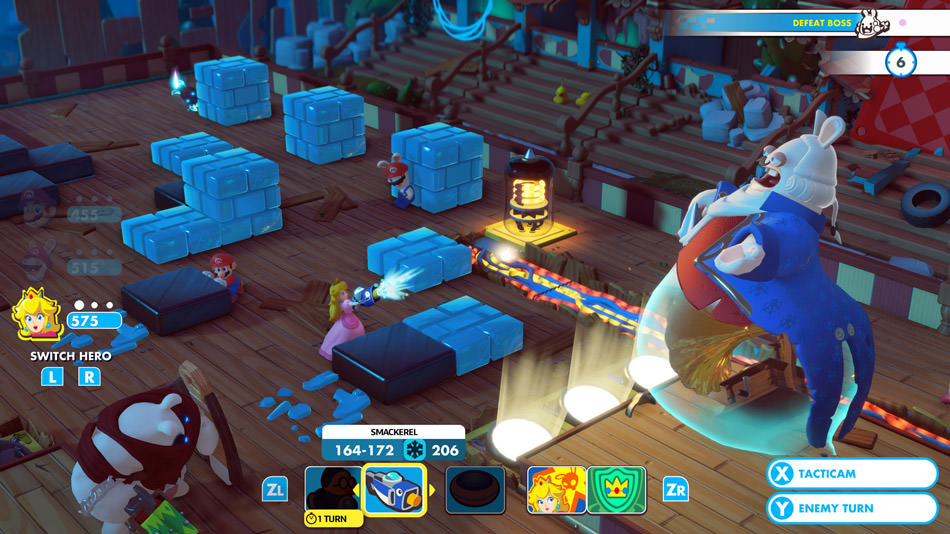 Combat in this game works like a turn-based tactical strategy game, much like XCOM for example. When you run into these combat sections you are given your challenge objective, then you can view the area to plan your strategy. Once you are ready just press “A” to begin the combat. Your team will always go first, during your turn you are allowed to move your three teammates once, use your primary or secondary weapon once, and use one special ability. Once you have done this for each of your teammates, the next turn is the enemies. They will move once, use their weapon once, and use a special ability of their own, rinse and repeat. Since you are only allowed to do each action once per character per term, you must tactically position your team in the right spots to maximize damage. You don’t want to just hang out in the open either, the enemies will take advantage of this and unleash hell on your wide-open character. You want to position them behind cover so your enemies can’t hit you, but also tactically position your team so they can get a shot off at the enemy Rabbids. Planning is key here, if you just go in moving where ever you want and not thinking about your play, you will quickly lose and have to restart the battle.

During a battle, you will go up against different types of Rabbids. Some are fast moving but with low health, others are big and slow but with a lot of health and hit very hard. There are Rabbids with shields, Rabbids that can teleport long distance, or jump across the map to maneuver themselves into a flanking position against your team. As you progress through the game the enemy Rabbids get tougher and tougher to beat. But thankfully you can perform a move that acts like a sweep against the enemy causing damage. This sweep is a bonus added to your one-time move action. You can even move, sweep the enemy if they are in range, then go back to your original position if you desire, causing added damage to the enemy. But take note, other Rabbids can perform this sweeping move as well against your team. Luckily it doesn’t do much damage against your teammates. For your characters though, their skills can be upgraded to achieve bigger damage while doing this sweeping move. Certain characters can unlock their abilities to perform this sweeping move on more than one enemy at a time. Mario though is the only character that can perform a stomp move, damaging enemies on their head, but can also perform a sweeping move as well. He just can’t perform both moves on the same enemy. So not only can you move and sweep enemies, you can also perform a combo jump with your other teammates to move longer distances or reach higher places. 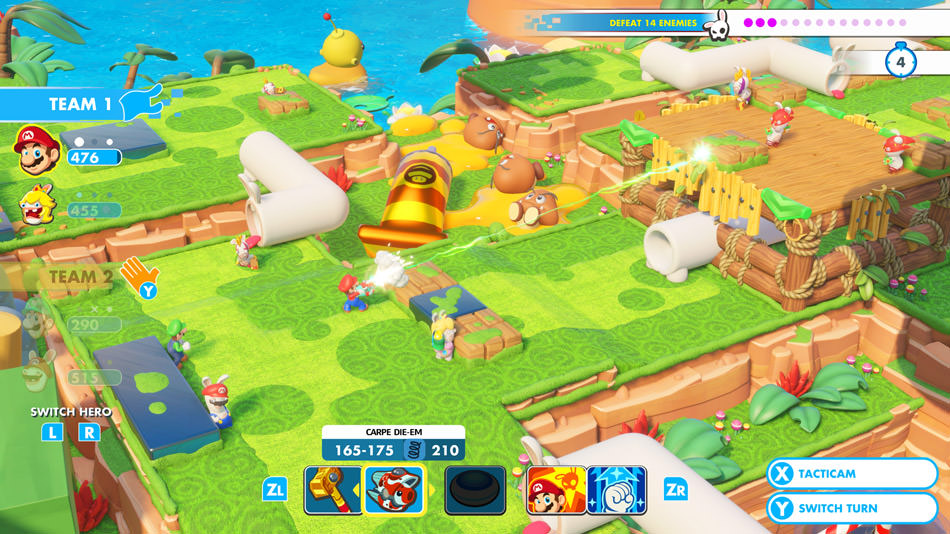 As for abilities, each character has a unique one. For example, Mario can boost damage not only to himself but his teammates within his range as well. Princess Peach Rabbid and Princess Peach can heal everyone. Luigi has an ability that increases the spaces you can move to and so forth. Figuring out the best combo of teammates with their abilities can be fun, but with Mario being a permanent member it almost leaves not much room for experimenting. Each character has their own set of weapons and secondary weapons. So you don’t have to worry about sharing weapons. At points during the game, the store you buy them from gets updated with better weapons, but you can also find new weapons for each character out in the world as you explore it.

All in all the game main’s story-line should last you about 20 to 25 hours depending on how you play. But that can be expanded to 35+ hours if you do everything in the game. This includes the optional challenges, going back and re-doing battles to get better scores, accessing areas in a world map that couldn’t be accessed before, and collecting all the collectibles in your museum. Plenty of value here to get hours and hours of fun. Even a co-op mode as well to play with your friends.

Finally the graphics and sound. The sound effects and music is what you would expect from a Mario game. Catchy and fun to listen to, along with the classic Mario sound effects. The Rabbids themselves sound goofy and crazy, exactly what you would expect them to sound like. Though at certain times during my play, some of the sound effects would cut out. Not a big deal, but definitely a missed bug. The graphics on the other hand are pretty to look at and very colorful. Didn’t really have much to complain here other then some frame-rate dips at some points during the game, but not enough to rend it being annoying.

I had a blast playing this cross-over between Mario and the Rabbids franchises. I loved the strategic tactical turned-based gameplay and the wackiness of the Rabbids as you explore the four main worlds. But Mario+Rabbids isn’t without faults. Only once did the game ever crash on me, and it can get sluggish at times with the dip in frame-rates. Having Mario as the leader and unable to swap him out to experiment with different teammate combos was a little disappointing.

I am also not a fan of going back through areas I already explored just to reach the new areas because Beep-O finally got the ability needed to reach them. But with the flaws aside, Mario+Rabbids Kingdom Battle is a fun, wacky, and challenging game. I hope to see a sequel in the future because Ubisoft finally made a game worth playing all the way through (and with no micro-transactions for once). If you have a Nintendo Switch or getting one in the near future. Mario+Rabbids Kingdom Battle is a must own for your system.