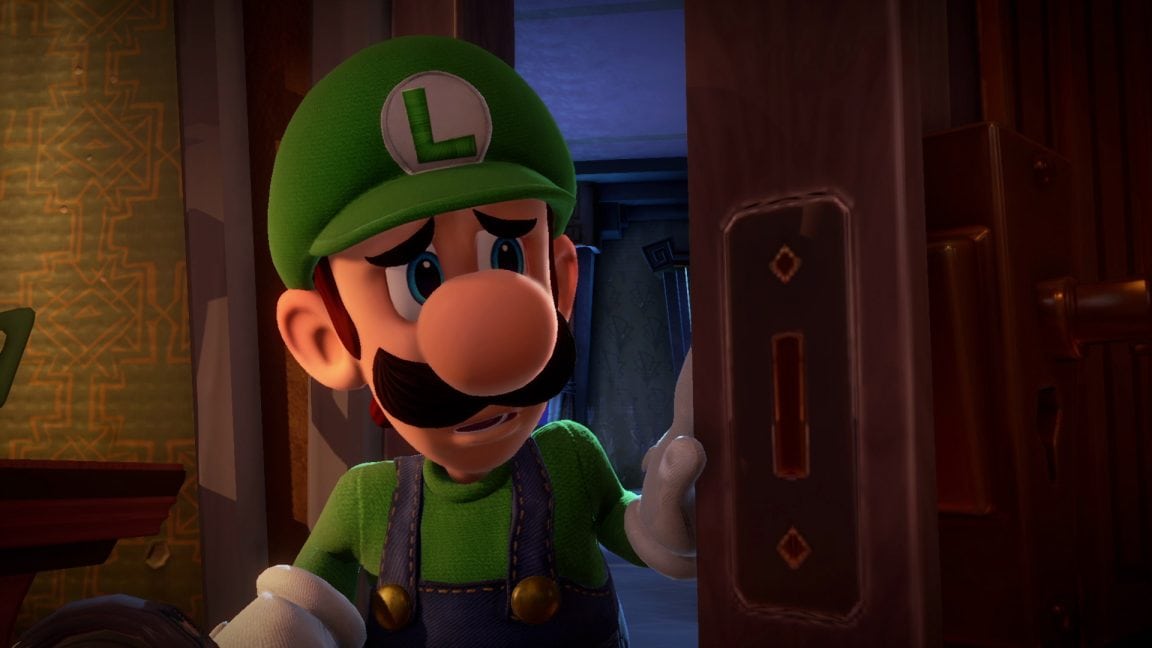 Luigi’s Mansion 3 is a game that gets the small details right.

If you press down on the D-pad at any point, you can make your ‘hero’ (being fast and loose with the definition of that word) scream out his brother’s name. And, depending on how scared Luigi is at the precise moment, the pitch of that scream changes. This is just one example of the care that has gone into all the little things that make this game memorable, and give it a unique and charming personality. It is just a shame that the same care hasn’t be lavished upon some of the irritations which plagued my entire play through. Like someone else’s toddler, Luigi’s Mansion 3 can one second be adorable and enchanting but moments later turn incredibly irritating.

The premise of Luigi’s Mansion 3 is pretty bread-and-butter stuff; while staying at a very suspicious hotel everyone (the Toads, Mario and Peach – whose kidnap insurance must be through the roof by now) gets snatched by King Boo and it’s up to Luigi to work his way up the hotel and save the day. While not the most gripping of stories, it’s a fun enough premise and sets up the adventure well – not everything has to be The Last of Us. 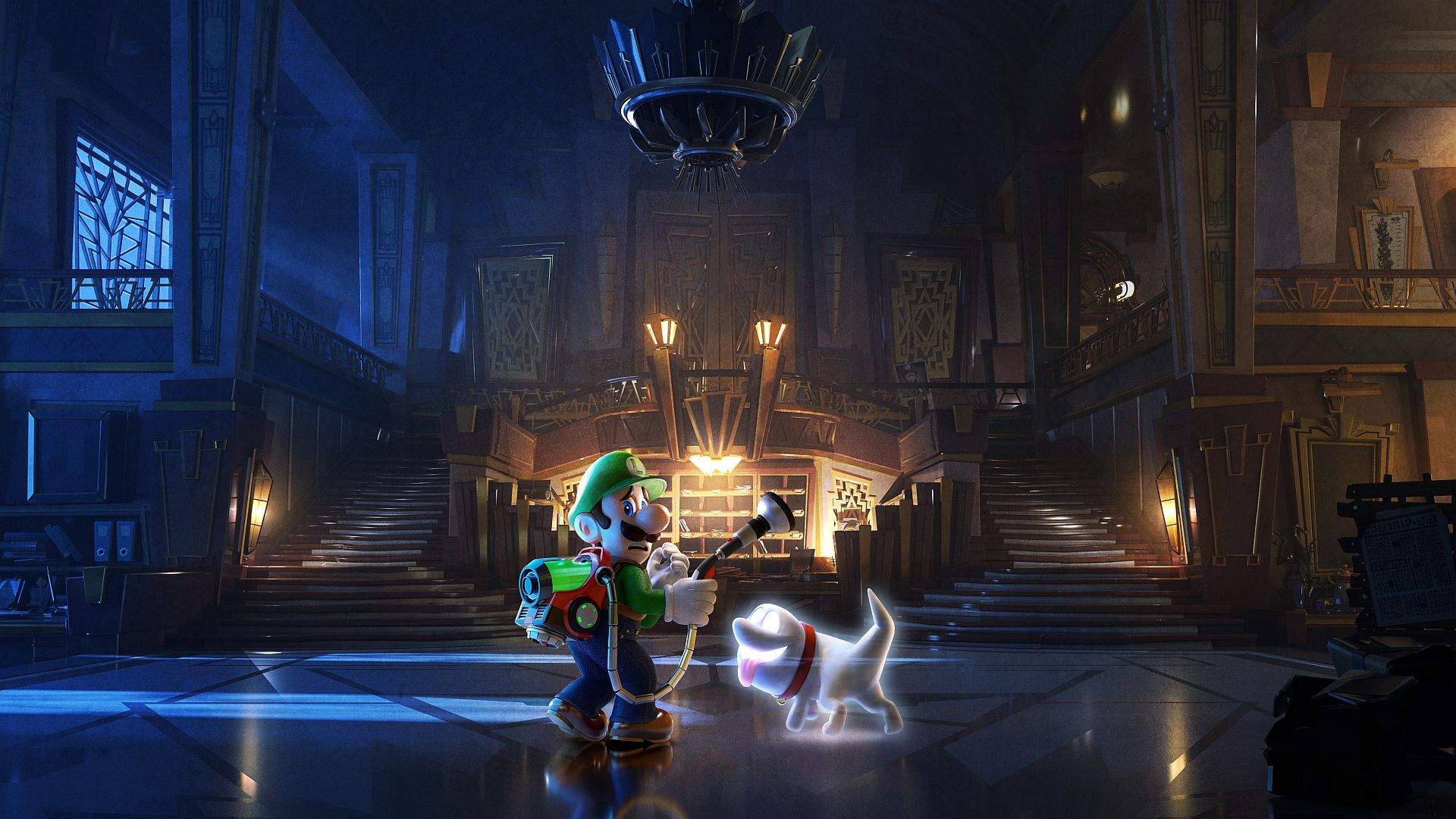 The gameplay itself is basically built around working your way through each floor finding self-contained fights or puzzles, which range from simple to baffling obtuse. Activities are generally limited to one room, and each urge you to use one or more of your various powers – flashlight, darklight, the new suction-shot (firing a plunger, and then using the rope to pull hard to reach objects down) or the excellently named Gooigi.

Gooigi in particular really adds an extra element to the game (quite literally). Clicking down on the right analogue stick will jettison an all green jelly-like Luigi from the back of the Poltergust 3000tm (Luigi’s vacuum cleaner). Gooigi can then be used in puzzles and combat, and so adds a whole extra array of moves to your arsenal. Whether it’s sneaking through a grate that regular-solid Luigi can’t get through, or extra fire-power to take down a larger foe, he creates a new host of potential solutions to puzzles. Combat using Gooigi is particularly satisfying, slamming down extra-large spooks gives a satisfying thump and is surprisingly intuitive.

Combat in general is one of the more satisfying, and well thought-out, areas of the game. Most fights boil down to a similar set of moves; stunning the enemy with your flashlight and then sucking them into oblivion to be trapped with all their friends in a (presumably increasingly cramped) vacuum pack. There are a small variety of ghosts, that require slightly different tactics, but most fights play out in a similar fashion. These may get to feel a little samey, but in all honesty the actions themselves are so satisfying it never truly becomes noticeable.

Combat is mixed-up much more with the various boss fights (and there are a staggering number of these) which are more inventive and varied. They range in quality from the hilarious to the downright frustrating, but for the most part are memorable standalone experiences that provide real high-points for each floor. 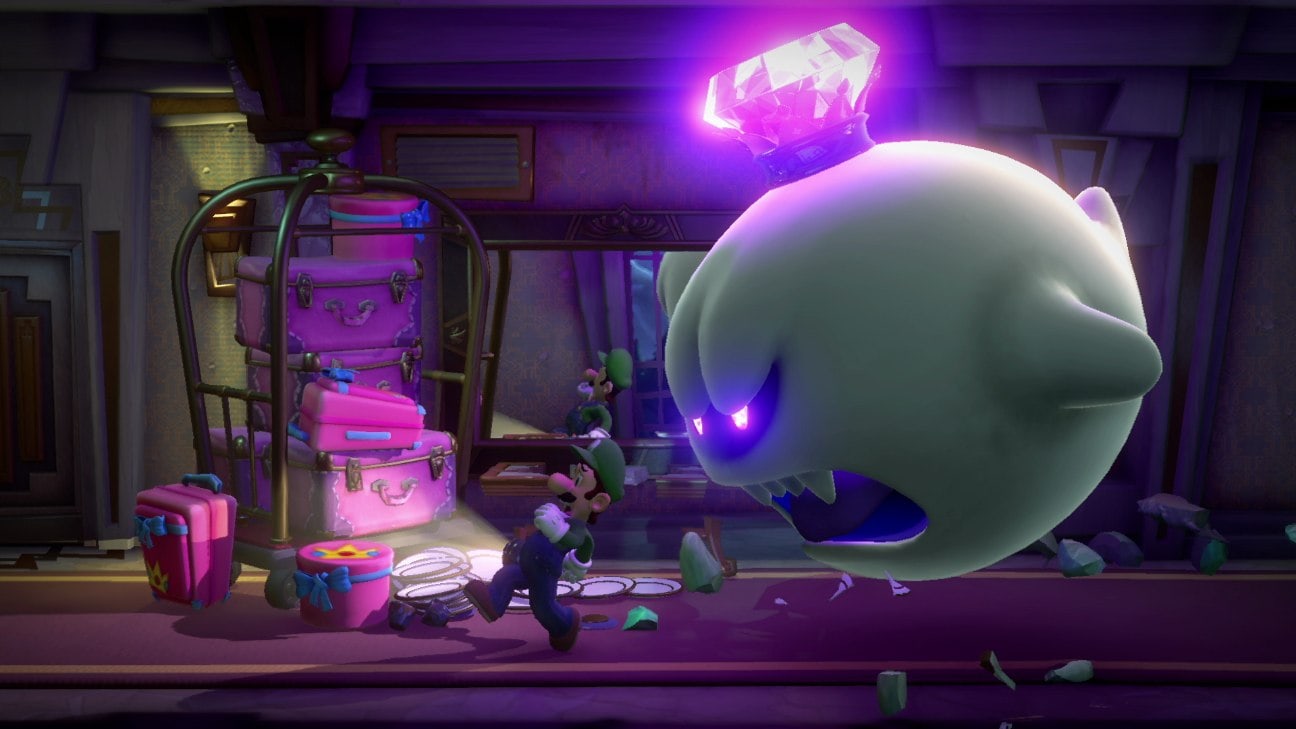 The samey combat and puzzles could become stale if it wasn’t for Luigi’s Mansion 3’s arguably biggest asset – its hotel setting. Luigi’s Mansion 3 might actually be a pitch for misleading game title of the year; there are technically zero mansions in this game and the buildings that are there don’t have Luigi’s name anywhere near the title deeds. But having the game set in a hotel is a stroke of genius. It gives it the excuse to completely mix everything up every hour or so – moving from pyramid-filled Egyptian themed rooms to fitness centres and giant gardens. Some floors are a traditional series of puzzles and combat leading up to a boss, while some are just straight-up boss fights. Each is unique, none over-stay their welcome (except for one specific floor – the Boiler room – which is discussed later and is truly awful) and they split the game into nice hour-long level chunks.

Through all of this, you see the aforementioned care and attention, and it really goes a long way to making this game what it is. You encounter waiter-ghosts flinging food at you, disco-ghosts doing a synchronised dance and even a ghost possessing a full-size T-Rex skeleton. Each extra character has a personality – they are fully terrified at the prospect of ending up in the back of Luigi’s Poltergust 3000tm  and also seem to take real pleasure in making the cowardly brother jump.

Each puzzle seems well thought out and range enough in difficulty to provide a good balance between frustrating and simply sleep-walking through levels. The floors are littered with collectables (which I confess I never found all of), offering an extra excuse to explore the playgrounds and flick every switch and flash every painting. The fact that pretty much everything can be sucked up or shaken by the Poltergust is the foundation of what really makes exploring fun, if it looks like it can be destroyed or smashed down then it probably can. Luigi can wreak havoc in every room, upturning duvets and literally grab-smashing toilets into baths and this is as satisfying as it sounds.

It helps as well that this is one of the best-looking Switch games out there.  Each floor is separated by a hidden-loading lift journey which means that power can be put into all the detail, animation and expression that bring this game to life. 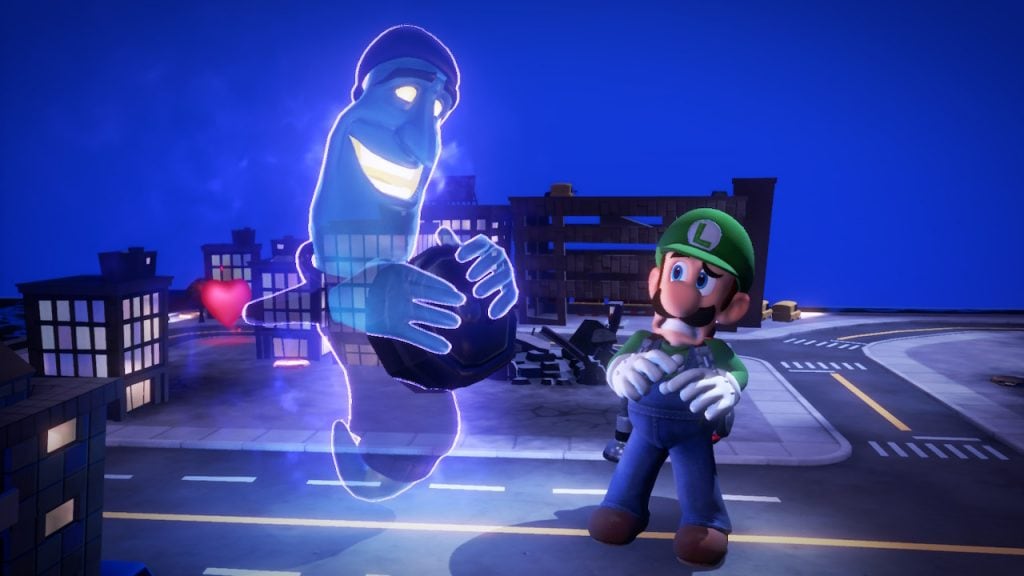 However, underlying the charm permeating the whole experience, there is also a constant underlying sense of frustration. It feels that this game is just one patch away from release, as there are so many little quality of life improvements you would just expect from a Nintendo game. There is an incessant beeping when you’re health get down to 50%, so is very frequent for a novice like me. There is no option to remove it, and it genuinely meant I turned the sound off for some key encounters (including the final boss fight) – really taking away from the atmosphere.

The controls in general do just feel a little clunky and awkward, aiming is imprecise which turns bosses from fun to frustrating in a second. There is no option to invert the y-axis, which might be the first time I’ve experienced this, making for a very frustrating opening hour.

Then there is the previously mentioned Boiler Room – which genuinely might be my least favourite level in all of gaming. For it, you commandeer an inflatable boat that controls appallingly, sliding all over the water and inversing a lot of directional controls. The boss fight in that level very nearly led to me putting down the controller for good, as it was essentially purely based on luck. These little frustrations can replace the awe and comic wonder with annoyance in a (noisy) heartbeat.

These are all (relative) easy fixes, so it is surprising that they are so prevalent throughout the game. Unfortunately, there are also some more fundamental flaws worth mentioning too. Despite the joy in trashing the hotel, there is very little to actually buy with the money you find. Thus the motivation, and the joy, of exploring and finding the ludicrous quantity of cash is quickly stripped away. Near the end of the game I was still smashing barrels for the heck of it, but with no real end goal. Having more options – different costumes like in Mario Odyssey for example – would have enhanced exploring no end.

Additionally, while combat is well executed and satisfying, it is a little strange that you encounter pretty much the entire roster of ghosts in the first hour meaning that later battles feel a little cut-and-repeat. The boss fights, while generally the highlights of each level, are also incredibly traditional. Each one has a three wave structure where you do something to knock the ghost down, then use your vacuum to suck it up and slam it down. It feels that the combat and content of these fights just don’t match up to their imaginative settings.

Ultimately, these frustrations and flaws tarnish the whole single-player play through. I was infuriated as much as I was amazed, and swore as much as I laughed. The ultimate annoyance is that Luigi’s Mansion 3 is so nearly a great game, and it does so much right. The setting, the satisfying combat, the tools and the charm are all there in absolute spades. But so, frankly, is a lack of refinement, a lack of originality in the combat and awkward controls that sometimes feel like they haven’t been tested.

Maybe, on reflection, Luigi’s needs to shout “Maaaarrio” just that little bit louder and get some inspiration from his elder, more polished, brother.

VERDICT: WAIT (FOR A SALE)