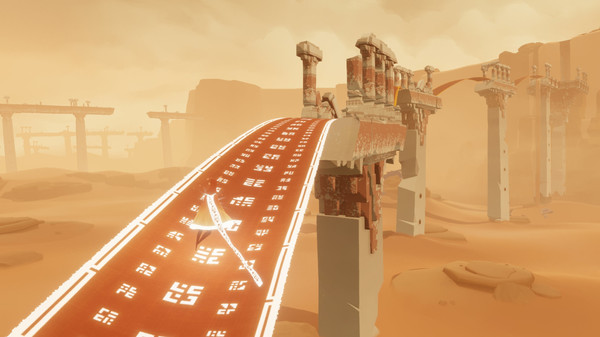 Journey sat on the list of games that I had heard so much good about, but for absolutely no real reason had never played. I presumed I would get around to playing it eventually, but if I’m honest had no actual plan to actively pursue. Well, this all changed when Sony released Journey (and Uncharted 1-3) as part of the “Play At Home” initiative – offering games for free as a way to encourage us to stay at home during the lockdown. So, I put a few hours aside last week and jumped right in – and am now incredibly angry at myself for missing out on this masterpiece for all these years.

I feel the need to get the “gamey” bits out of the way because Journey feels so different from my recent gaming experiences. On the face of it, Journey is incredibly simple. You control a nameless character, beginning in the desert with a goal of reaching the summit of an increasingly close mountain that rarely leaves your sight. You get there by a series of platforming challenges, punctuated by cutscenes to provide a clear divide between areas. You move through various landscapes, including exploring lost cities and journeying underground, encountering creatures both friendly and incredibly unfriendly. 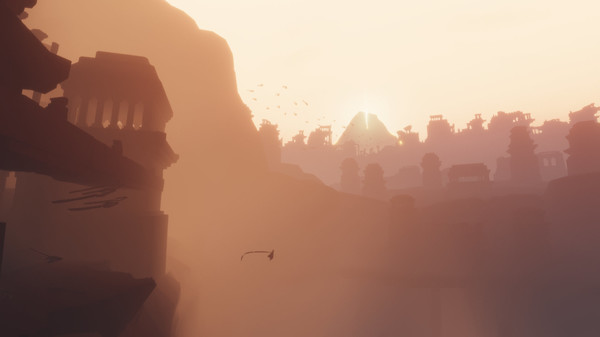 The controls are extremely intuitive.  You can tilt your controller to control the camera, while pressing X gives you a limited jump and circle makes you sing which can activate certain powers depending on what is nearby. You gain the ability to jump from pieces of fabric and magical creatures which litter the landscape and join you on your journey. There are even optional extra glyphs you can collect as you travel through, or ignore entirely if you want to focus on reaching the summit.

And there you have it, that’s pretty much it.  Except, of course, that really isn’t it.

Journey feels more like an interactive film than a game, a beautifully told and haunting story that will stay with me for a long time. Part of this is due to the length, it takes around 2 hours to scale the mountain (a little more if you try and find all the glyphs) and it feels designed to be completed in one sitting. There is also the lack of challenge, it is certainly a puzzle platformer but the puzzles are pretty simple and I’m not even sure if it’s possible to fail or see a “Game Over” screen. There is no pause button, once you set out on your way that’s it – it is one continuous adventure. If you do want to leave it for a few minutes, simply stop playing and your character will sit and meditate. Additionally, after the first minute of control explanation, there are no on-screen prompts or writing, instead there are simply shining lights or friendly companions nudge you in the right direction. There are no control settings, no menus, no systems to upgrade – just a journey to complete. 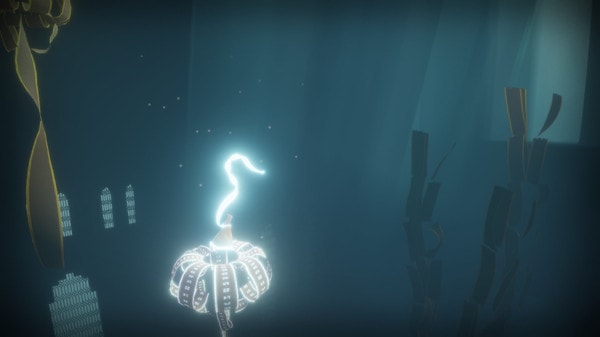 But why does it feel so magical? One of the key reasons is the world it’s set in, and the restraint shown by ThatGameCompany and Santa Monica Studios in what they show and what they leave to the players’ imagination. So little is told to you, but just enough to get your mind racing. Why is my character making this journey? Who are the figures in the cutscenes helping me? What about the magical fabric creatures? What are the machines or monsters in my way? Are they invaders, were they created? So little is known, but this means I have been filling in the blanks in my head since putting down the controller. Clearly the world you are travelling through has suffered some disaster, a war or natural cataclysm, but why, how long ago and by who is left up to you. These are just some of the unanswered questions that get the mind racing, simultaneously somehow making me want to find out more while being pleased so little has been told. This is something I’ve loved in many recent and older titles – from the unexplained worlds of the older Zelda games to the whole experience of Okomotive’s beautiful FAR: Lone Sails from 2018. When created this masterfully, a world can be a starting point for a player’s imagination to run wild and can lead a short and relatively simple game to mean so many different things depending on who played it.

The setting manages to do this partly because of the stunning visuals. This does not look like an eight-year-old game as you glide through beautifully rendered sand, the camera panning to ensure as much of the world is soaked up as possible. The cell-shaded effects bring magical creatures to life in beautiful and terrifying ways, and really make it feel like a lost world that was once lived in. For such a short game there are surprisingly frequent changes in scenery, and each one elicits a different range of feelings – not only visually but also audibly. The soundtrack changes in a heartbeat with these shifting emotions, soaring when it needs you to and then shrinking to become deathly quiet in moments of danger. The journey can be hard going but it can also be incredibly inspiring and beautiful – and the music is right beside you every stagger, step and flutter of the way. 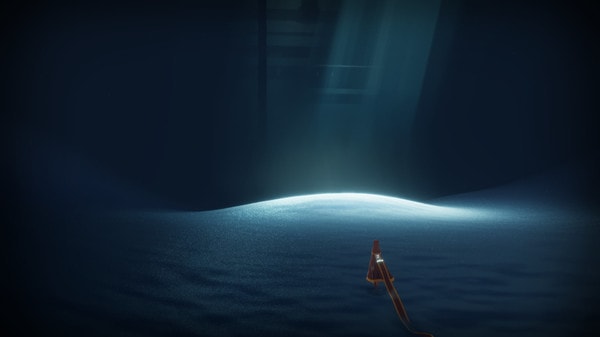 It is important to remember of course that this is a game, just a very unique one, and those bits that are more game-like are also done to perfection. The controls are minimal but intuitive and the puzzles, while easy, are still satisfying. The whole adventure is built on a very simple but effective loop of exploration, puzzle, accomplishment and rest. Each one is long enough to build emotion and add to your journey, but short enough so backgrounds and puzzle types change with enough frequency. There are occasional senses of peril and mini-stealth sections, but these aren’t frustrating and add a sense of danger and high-stakes. There is also co-op play, of a sort. On my first run-through, my ascent was a solitary one, but on my second climb, I encountered multiple companions. These are other real players climbing at the same time as you. You can’t talk to each other, but you can press circle to sing and charge up each other’s jumps. Finishing a section together meant you would start the next one together too, and it also altered some of the cut-scenes to show two travellers. This changed the experience of my climb completely, singing along with another companion and helping each other along the way.

As you may have guessed, I can’t recommend Journey enough – and now Sony have made it completely free, there is no excuse not to play it.

In just two hours I felt an astonishing array of emotions, from joy to fear and everything in between. It even, I am almost ashamed to admit, made me jump twice. Twice. Half film, half game, all wonderful in a stunningly visualised world that is just well enough realised to give your imagination a setting to run wild.