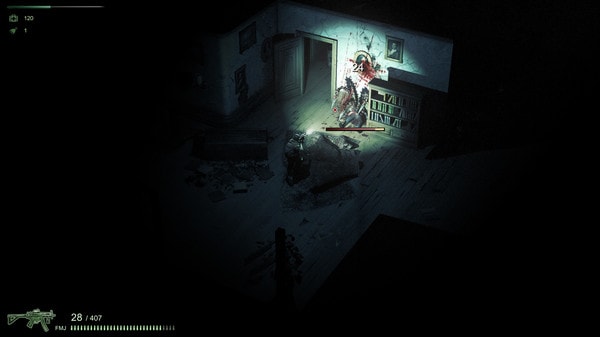 I don’t understand why horror-RPGs are so rare. Murphy’s Law would suggest that they’re rare precisely because I love them so much, but perhaps they just aren’t as popular as I wish they were.

HellSign, from Australia-based indie duo Ballistic Interactive, aims to fill a surprisingly small niche, and while it’s totally great in some ways, rolling it out as an Early Access title was probably a bad call.

HellSign is not especially concerned with the depth of its narrative. There is one, but unless it’s going to get a lot of fleshing out in future updates, it’s pretty bare-bones.

During a cool graphic novel-style intro, your unnamed dude wakes up from a hellish nightmare to discover two important facts: he can’t remember who he is, and he’s got a giant demonic tattoo on his back. Moments later, he receives a mysterious phone call telling him to go to a certain address, and he decides to play along.

Soon enough, it’s revealed that the protagonist is apparently something called a “scout”—someone who investigates but doesn’t necessarily directly confront paranormal activity. After he completes a few low-paying introductory jobs, fellow hunters start giving him bigger tasks; more about this dude’s identity and destiny will presumably be revealed in later story missions.

If you’ve played either of the Payday games, you’ll recall that semi-randomly generated missions periodically show up overlaid on a map of the city; HellSign follows suit, offering infinite random side jobs concurrently with story missions, of which there are currently only two (I think).

Even though there are three slightly different types of missions, the basic flow of each is the same: sweep the house for “signs” (i.e. clues) using various ghost hunting equipment and kill any lesser creatures you encounter. Scouting missions will additionally require you to identify the primary ghost or monster by comparing signs against your notes on various types of baddies, and that aspect of the game is pretty cool. Unfortunately, like the story, it’s pretty bare-bones right now; there is only one “boss” monster and a handful of lesser threats currently in the game.

Your ghost hunting loadout consists of one or two firearms, light or heavy armor, an EMF detector, a directional microphone, a blacklight, a thermal scanner, and a few other gadgets. There’s an impressive amount of freedom and variety in how you can build your character: combat medics, genius investigators, heavy weapon specialists, and treasure hunters are all viable options—at least with the limited amount of content available right now. Balance issues may arise as more (and more diverse) enemies are added to the game.

During missions, you’ll need to check each room of each house carefully; different signs are only detectable by certain tools. The investigation process gets a bit tedious after a while, once it boils down to cycling through every tool in every room while spinning around in a circle. Whether or not the developers plan to flesh out this system and make it more engaging (or at least less repetitive) remains to be seen.

The camera takes on a classic 45-degree isometric view. It’s not terrible, but it strikes me as perhaps not the best choice for this sort of game. You can’t rotate the camera, and it’s sometimes difficult to tell where walls and doors are. Shooting demands a high degree of precision, which is difficult to achieve with the moderately awkward control scheme and the fixed camera both complicating things. A traditional over-the-shoulder third-person perspective would have been the way to go, in my opinion.

When you’ve completed a job (or fled from it, which is always preferable to dying), you’ll score some cash and some XP. Spend the former on gear and the latter on skills, and you’ll gradually become capable of taking on more dangerous haunts. It’s a basically enjoyable and rewarding core gameplay loop, but because of how little content there is right now, HellSign will undoubtedly sit untouched in your library for a long time after you’ve completed what is effectively a long demo.

If future updates focus more on atmosphere, intrigue, and the puzzle-solving aspects of investigations, HellSign could turn into an excellent and truly unique horror game. If we only get more of the same, it will fade into obscurity.

Cutscenes and dialogue take place in static 2D frames a-la early 2000s RPGs, which isn’t a bad thing at all. The few distinct non-mission environments currently include a dingy hunter bar, your personal safe house, and a gun shop, all of which have a runny watercolor look to them that creates a cool, seedy underground vibe. 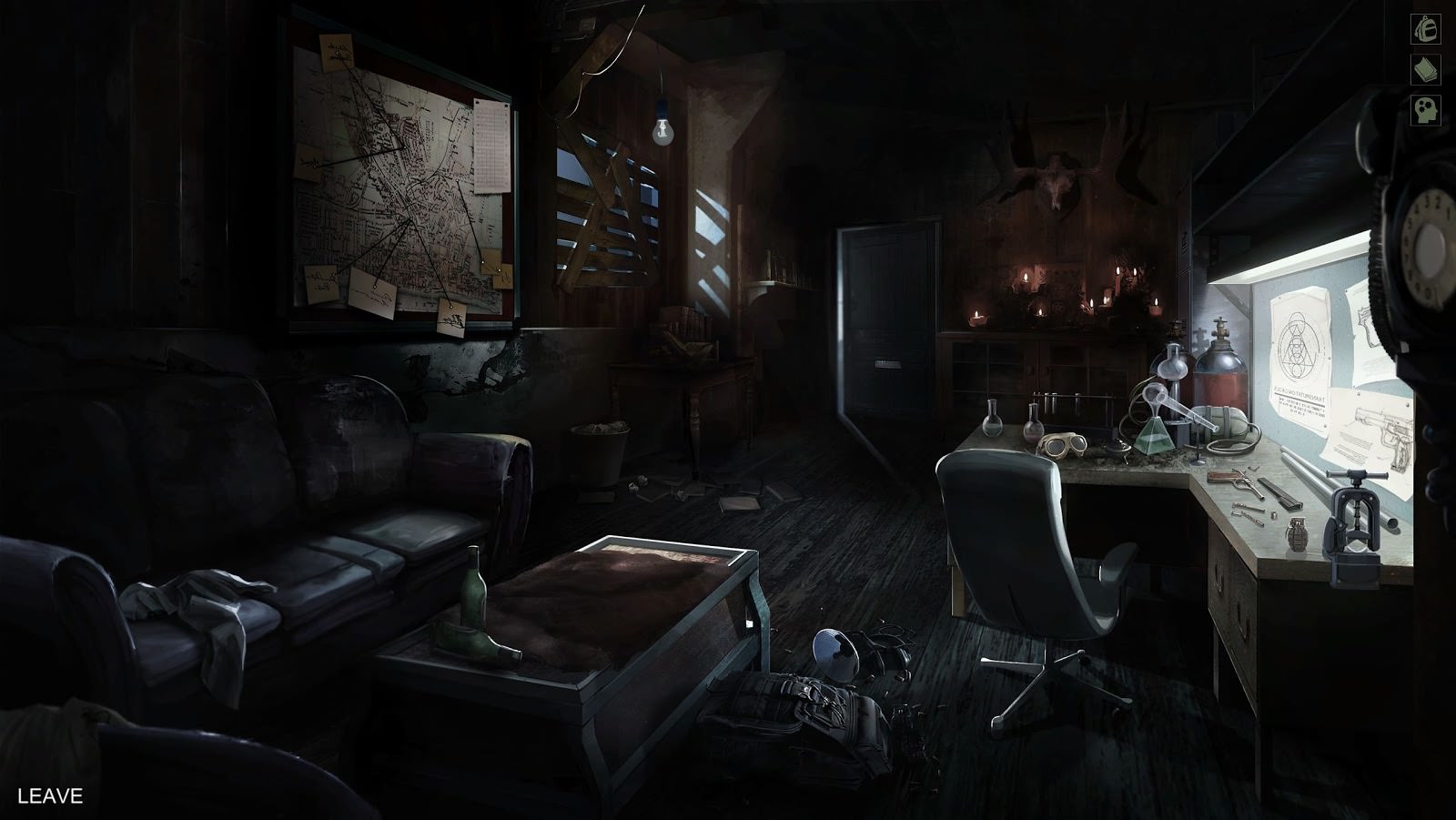 Each house you visit is basically the same house—only the rooms and some of the items in them are rearranged randomly. Like so much else about HellSign, the decision to randomize each mission with pre-made tiles would produce a much better final result if there were simply more content to work with.

Character animations are a bit stilted and awkward, particularly firearm reloading animations. Enemy models look better and move more impressively; giant insects skitter fluidly across the floor, and floating furniture wobbles in a surprisingly convincing fashion when a poltergeist is about to hurl it at you.

All in all, HellSign could use a bit of polishing in the art and animation departments, but it’s generally pretty good so far. Its core gameplay is definitely a more immediate priority.

HellSign has some groovy background tracks, but once again, not very many of them. The tunes in your safehouse and in the local bar are particularly memorable and match their respective locations well. During missions, you get little more than sombre, low-key strings—they’re fitting, but they don’t really stand out.

Sound effects are also hit and miss, but lean a little more heavily toward “miss.” The half-dozen weapons I’ve tried all produce flat, unremarkable reports. Some of the pervasive ambient sounds, like slamming doors and assorted ghostly moans, have more impact to them.

I’ve spent about four hours with HellSign as of this writing, and its current build seems to be perfectly stable. Frame rates are steady and smooth on a GTX 1080/i-7700 4.5GHz processor combo, load times are reasonably snappy, and everything generally works as intended. I’ve seen no crashes or obvious bugs so far. Since the game relies so heavily on lighting and shadows, it may tax budget rigs on higher settings, but I don’t expect most setups to struggle too badly.

I struggled to come up with a final score on this one. I want to love this game. I really, really want to love this game. It perfectly embodies one reason I dislike the Early Access paradigm in and of itself; incomplete games are extraordinarily difficult to evaluate objectively or in any sort of integrated context (because 80% of the game doesn’t even exist yet).

Even cutting HellSign what I think is a generous amount of slack for its (fully disclosed) unfinished state, it’s just too incomplete right now. The product currently on the Steam store page should be a free demo button, not a $14.99 Early Access button. The developers are off to a generally good start, but that’s all it is right now. It could go in any direction at all—there’s no telling what the final product will look like, assuming it doesn’t just quietly die like so many Early Access games do.

The sorts of fundamental problems that HellSign needs to work out shouldn’t be on display in an open forum, in my view—certainly not one that people are being asked to pay for. The game doesn’t even have a real identity of its own yet, and I firmly believe that there is such a thing as too many cooks in the kitchen. I fear that, like so many Early Access games, it will try far too hard to be everything to everyone, and end up being nothing at all.

Nothing is predetermined, though. HellSign can be, should be, and hopefully will be an amazing horror-RPG someday. It just isn’t yet—it has a very long way to go.