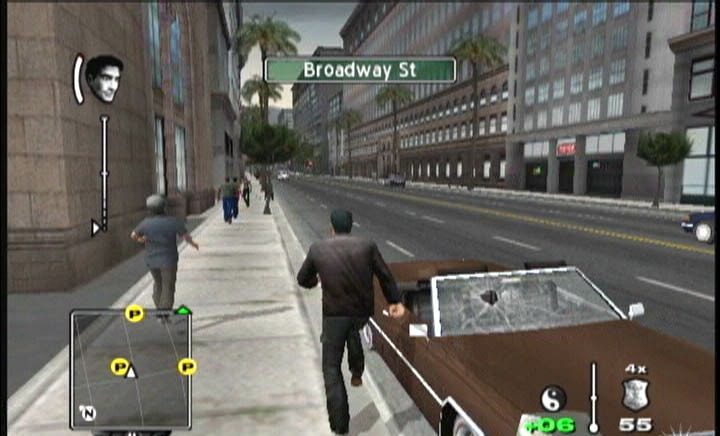 Games Gone By are short retrospective reviews, taking a look back at games you may have missed.  Today’s game is True Crime: Streets of LA.

True Crime: Streets of LA was one of my favorite games on the Xbox back in 2003. I spent many weeks kicking butt as kung-fu master Nick Kang, a badass cop, bringing the Russian mafia to its knees.

It would have been too easy to dismiss True Crime: Streets of LA has yet another Grand Theft Auto clone.

Fortunately, True Crime brought a few new tricks to the party to differentiate it from Rockstar’s beast. Playing as the law rather than against it, learning kung-fu moves to bring down armies of bad guys, and various endings depending on your performance…oh, and a protagonist who actually talked. Bonus.

I loved True Crime when I played it for the first time all those years ago. Having played it again more recently, I still found myself having a good time, despite there now being dozens of newer titles in this genre. Don’t get me wrong, GTA V and Saints Row IV are leagues ahead in almost every department, but for a good ol’ karate cop experience? You can’t beat True Crime: Streets of LA.

The storyline in True Crime: Streets of LA could have been pulled straight from a late 90’s cop action movie. Think “Lethal Weapon” but with a dose of supernatural, with action tips from Jackie Chan. The story does get a little ridiculous in parts, but that adds to part of the charm. Plus, you get to unload a few clips into a dragon in a lava pit.

Another highlight is the voice acting, which was superb throughout. Even with the blockbuster budgets wielded by some video games these days, there are too many examples of poor voice acting. This can be immersion breaking and can completely ruin a well-written script.  The cutscenes in Streets of LA particularly shine due to the stellar voice work.

While dated today, the graphics are still decent and the music on offer still got my head nodding on too many occasions to count.

As adult gamers it can be difficult to justify going back to play a game that wasn’t entirely perfect on release – I get that. There are dozens of games released every year that we’ll never have the time to play, let alone to set aside time to play an oldie. But, if you do happen to have a spare weekend coming up (by some miracle!), you could do a lot worse than dusting off your old Xbox and picking up True Crime: Streets of LA for a few dollars.