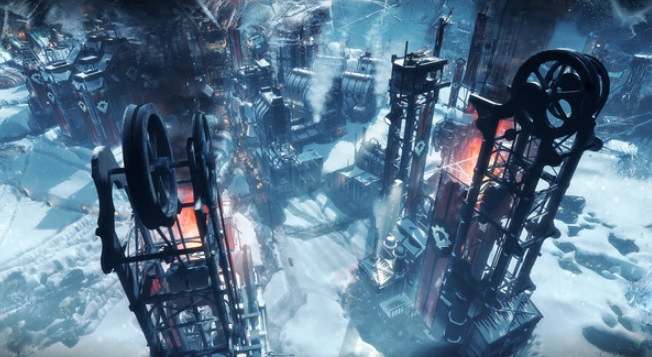 In an alternate 1886 timeline, Earth has frozen over and there are no signs of the weather heating up. The warmer countries perished almost immediately causing the deaths of millions. But those prepared for the cold weather had a plan to survive. To rebuild society around Steam-Powered Generators that will provide basic needs. This is Frostpunk, a city-building survival game developed and published by 11 bit-studios.


Frostpunk takes place in an alternate 1886 England, where the people of London have to abandon the frozen city to travel north in search of Steam-Powered Engines in the hopes to rebuild society. You play the role of city ruler, who is in charge of managing both the inhabitants and the infrastructure of the city. Your leadership and tactical skills face ever-growing challenges, questioning the morality and the basic foundation of this new society. While most of your time will be occupied with city and society management, there are times where exploration outside of the city is necessary for survival. What decisions will you make so the city can survive? What will you do when pushed to the limits? 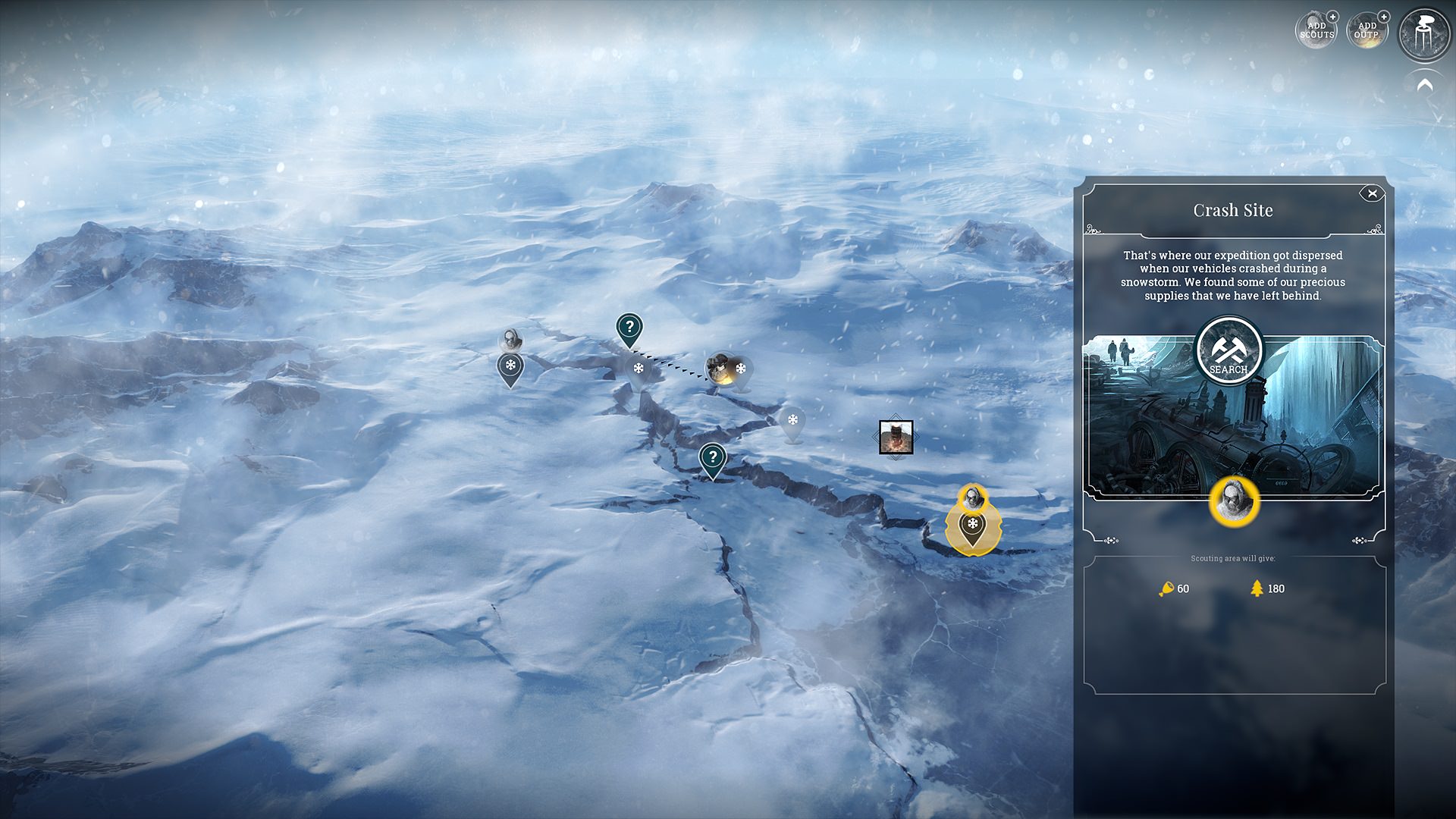 In Frostpunk city building is different than most games. Since everything revolves around the Steam-Powered Engine, you have to build buildings in a circular fashion spreading further away from the engine. This in itself can provide an interesting challenge, as heat will only radiate so far. Of course, as you progress through the game you can upgrade the engine to increase the heat zone and also increase how much heat is generated. Doing this will increase your coal consumption, so managing that is a must to keep the engine from shutting down and your citizens from freezing to death. Coal is not the only resource you must gather, wood, steel, and food are the other three very important resources to gather and maintain for your city. People can starve if you don’t have enough food. Buildings and upgrades can’t be built without wood or steel. But if managing that is not enough, another resource is also very important, people. People are used for the various jobs needed to keep the city running. Such as gathering the resources to heat and build the city. Doctors to heal the sick, and cooks to feed everyone. There are three types of people as a resource, workers, engineers, and children. Each can be used to work the jobs needed and some are specifically required for certain jobs. And yes, you can force children to work, but only if you make it a law. 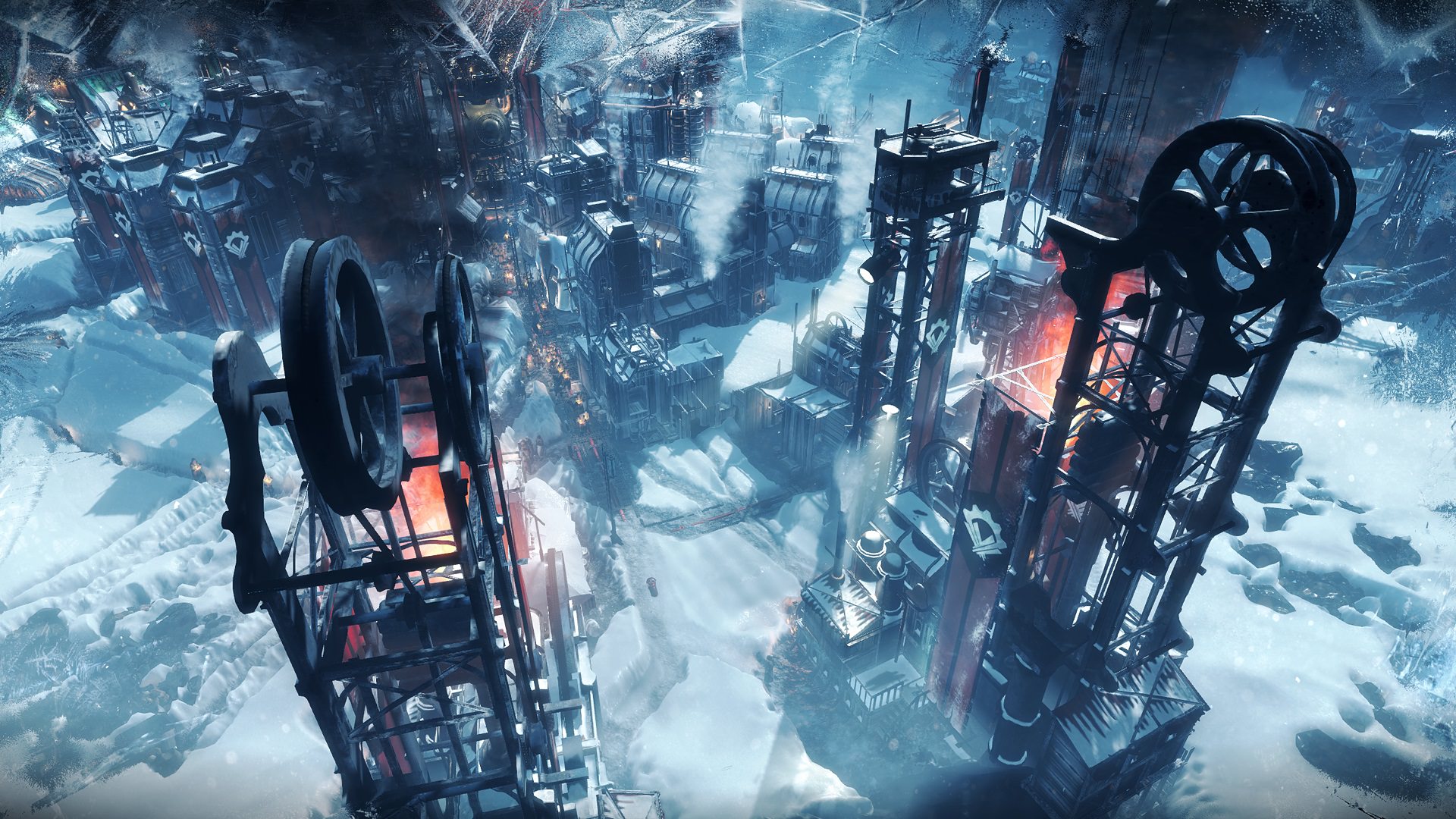 Laws play in the social part of Frostpunk, as for every law you sign it can either piss people off or make them happy. This is where another factor must be managed, hope and discontent. Depending on what happens in the game these levels can rise or fall. Hope is what keeps people working and happy. Discontent will piss people off and can cause riots or even throw you out into the cold ending the game. So be careful with what laws you sign, as they may hurt you in the long run.

The art design, sounds, and atmosphere are all very well done in Frostpunk. The game looks good and the art fits the frozen theme of the game world. Just looking at the buildings and people can make you feel the cold chills your self. Light is rare, so to see the heat and light radiate from the engine is a sight to see, as it looks like the sun and the center of everything when your city surrounds it. The sounds of the game match what you should expect. Sound effects like building structures, background white noise made to sound like busy people working or complaining, and the creaking and straining of the Steam-Powered Engine as it provides heat and hope for your city. The music fits perfectly with the dread of the frozen dystopia always reminding you that death and discontent are unavoidable. The one thing missing, but not a big deal, was voice acting. Not once did I hear any voice acting at all, no lines were ever spoken. Frostpunk has an atmosphere that always makes you feel that hope is not an option, it is a way of life. 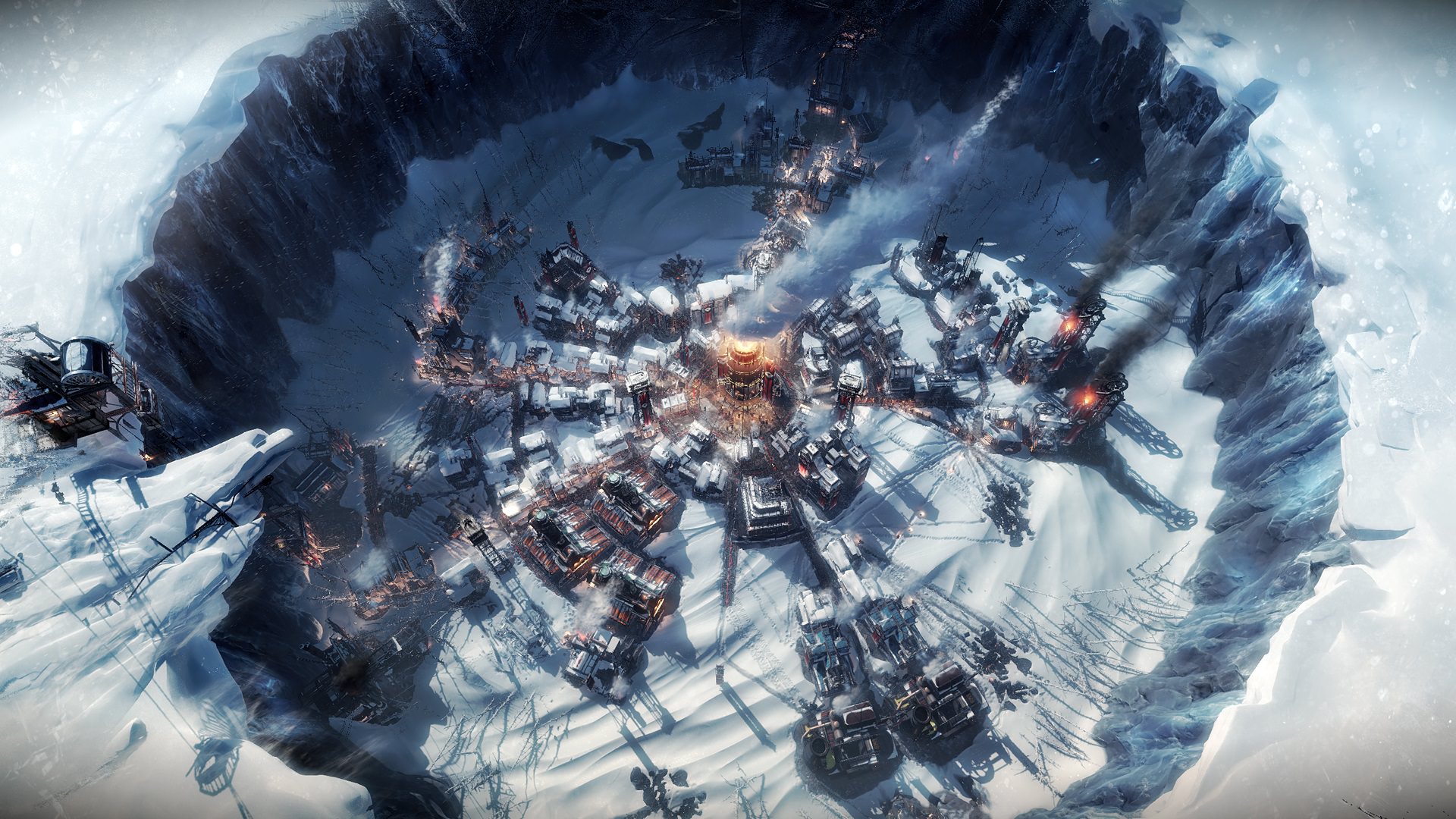 Gameplay in Frostpunk is simple, but unlike other city-builders, not only do you have to worry about gathering resources to survive, keep your people happy, and manage their society. You also have to worry about the ever-present temperature. Throughout your play, the temperature will fluctuate from warm to cold and back to warm again, but never going higher than negative 20 degrees Celsius. At times it will even reach up to negative 150 degrees Celsius, making for one hell of a challenge to survive. To help combat the temperature, gather resources, and keep your people happy and healthy are many buildings. They range from steam-hubs to extend the heat of the engine beyond its heat radius, infirmaries to cure the sick, coal mines and sawmills to help gather resources, and many more. You can even end up building automatons, which are spider-like giant robots that can replace workers at a location for 24-hour production. Yes, there is a day and night cycle and people will only work during the day and rest at night. Unless you enact laws that can force them to work 24-hours for a short period of time.

Each building, even houses that your people live in, have a temperature gauge. As the temperature drops outside, it drops inside those buildings as well. You can combat this by upgrading the engine and adding the ability for heaters at the workplace, but all this comes at the cost of burning more coal. Decisions, decisions, many decisions. Will you force children to work to add to your workforce, or force the sick with frostbite to have their limbs cut off, and maybe even force people to eat sawdust if your food supply is low? Whatever it is you decide to do in Frostpunk, just know that laws are permanent and can harm you or help you in the long run, so choose wisely. 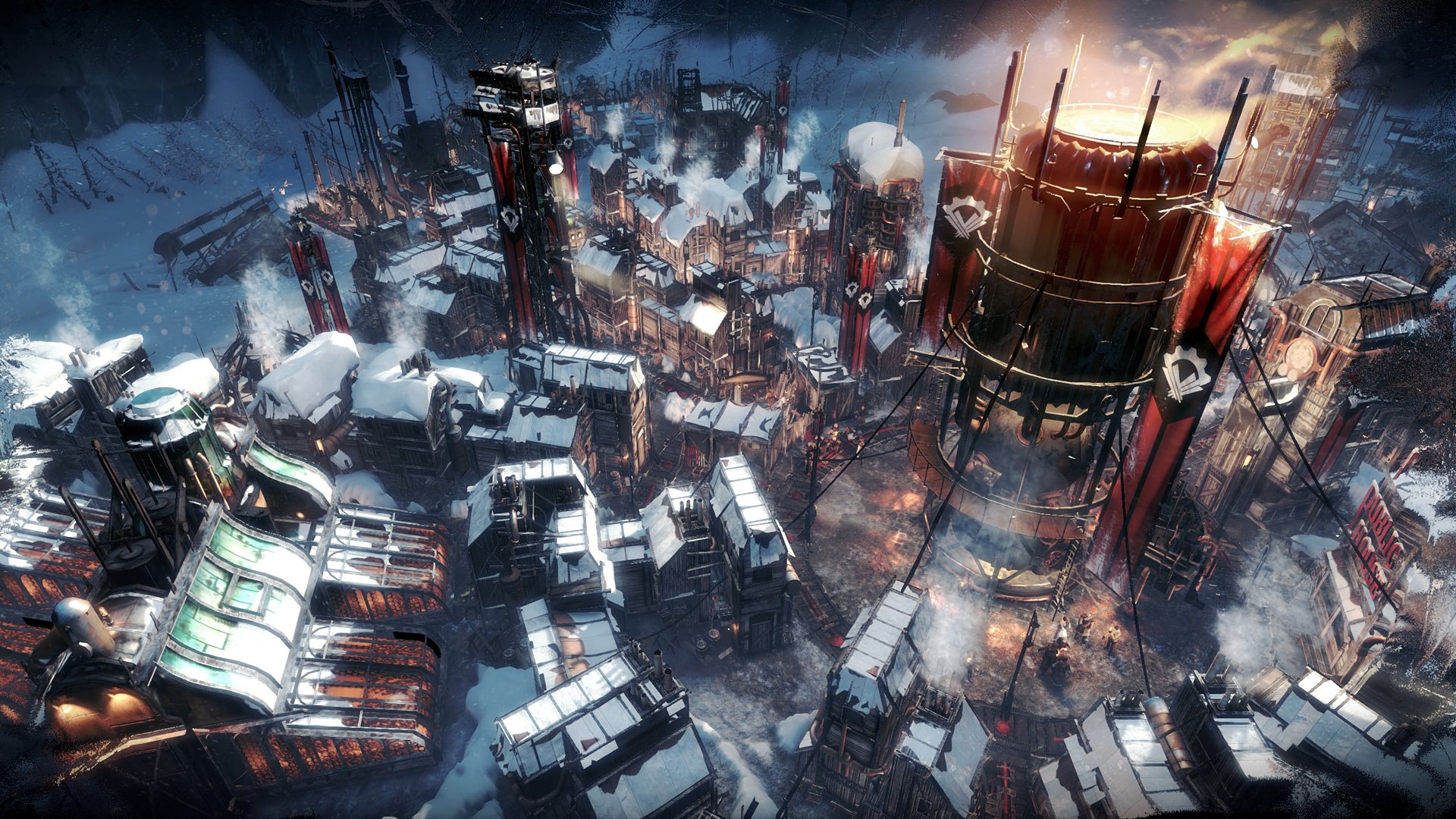 Frostpunk is an interesting take on the city-building sub-genre. It is fun and challenging and even stressful at times. You can feel the weight of your decisions when you enact laws, as the people complain and start to distrust you as their ruler. You walk that fine line of tyrant and savior. I rather enjoyed Frostpunk and at times got pretty addicted to it. Though it isn’t perfect, I mean no game is perfect, but Frostpunk has its flaws and some that stick out quite a bit.

For example, there really isn’t much of a tutorial. You start off by jumping into the main story campaign and as you play some helpful tips come up. This resulted in my first playthrough with my people throwing me out of the city to die in the cold. If a tutorial was present to show me what to do then maybe that could have been avoided. Another flaw I found was the chart to show how much coal you are burning. It doesn’t really show you the true number or at least that is how I found it to be. When you click on the engine it gives you a total number of coal being burnt per day. But that number doesn’t really take into account all the other things such as steam-hubs and heaters. There is a list that shows you what is currently on and using coal, but nothing that shows you numbers. Missing is an expense report you see like in other city-building games with your finances. It would have been nice to have some sort of coal ledger, as I would imagine that if Frostpunk was in the real world people would keep track of coal coming in and being used. Lastly, Frostpunk only has three campaign scenarios, granted they will last you about ten hours of play and can be customized for replay. But I would have like a sandbox mode to see how long I can survive.

Other then those few flaws I found in the game, Frostpunk is still worth playing. I would suggest picking it up or even placing it on your wishlist to wait for a sale. 11 bit-studios did a good job making an interesting twist on the city-building sub-genre.