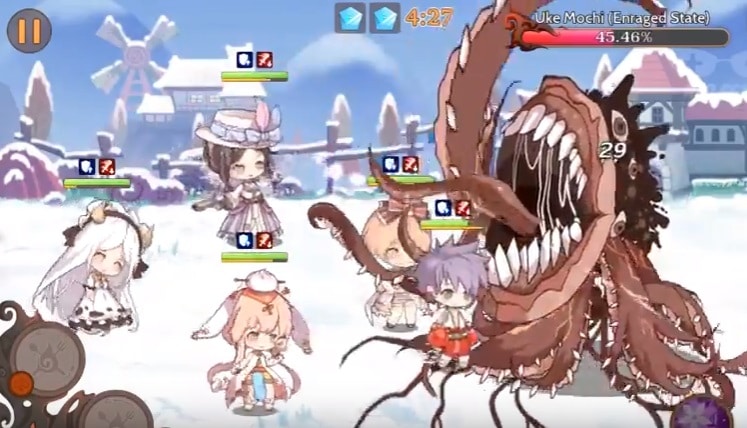 Food Fantasy is a hybrid strategy/RPG for Android and iOS, featuring pretty artwork, dozens of characters to recruit, a restaurant to manage, and personified eating disorders to do battle with. Unfortunately, the meal is not as appetizing as its ingredients might suggest.

Mysterious beings known as Fallen Angels – often named after debilitating illnesses like Bulimia – have recently appeared in the world of Tierra to wreak havoc and generally make life miserable for humans. Fortunately, these evil entities have more benevolent counterparts called Food Souls, which are the anthropomorphized ghosts of various food items. No need to go back and double check, you read that sentence correctly.

Some Japanese RPGs are masterfully written and will live on as legends of video game fiction for decades. Food Fantasy is not one of them; it falls into the other common JRPG archetype of “barely coherent weird nonsense.” It seems as though its narrative elements were born from a three-hour game of “what if” and strung together in no particular order, and this pattern holds true for many of its other elements as well.

The game begins by offering your newly created character—which can be a six-foot cat, because of course it can—their very own restaurant. The circumstances under which this restaurant is sold (given?) to you are vague and suspicious, as are its first customers, who begin spouting exposition about dangerous food demons in the woods nearby. Naturally, you abandon your brand new business on its first day to do battle with them, as any up-and-coming entrepreneur in the food service industry would.

From here, you split your time and your recruited Food Souls between your highly eclectic restaurant and running off to engage in tedious, repetitive combat with Fallen Angels. Nothing about the story ever becomes more sensible or interesting.

Food Fantasy is pretty enough to look at, even if the traditional 2D anime art style is nothing new. There are a huge variety of environments, and most of them are bright and colorful. The visuals become less interesting in combat, where you’ll find yourself watching the same generic sparkly particle effects for longer and longer as the already tedious battles become even drawn out. 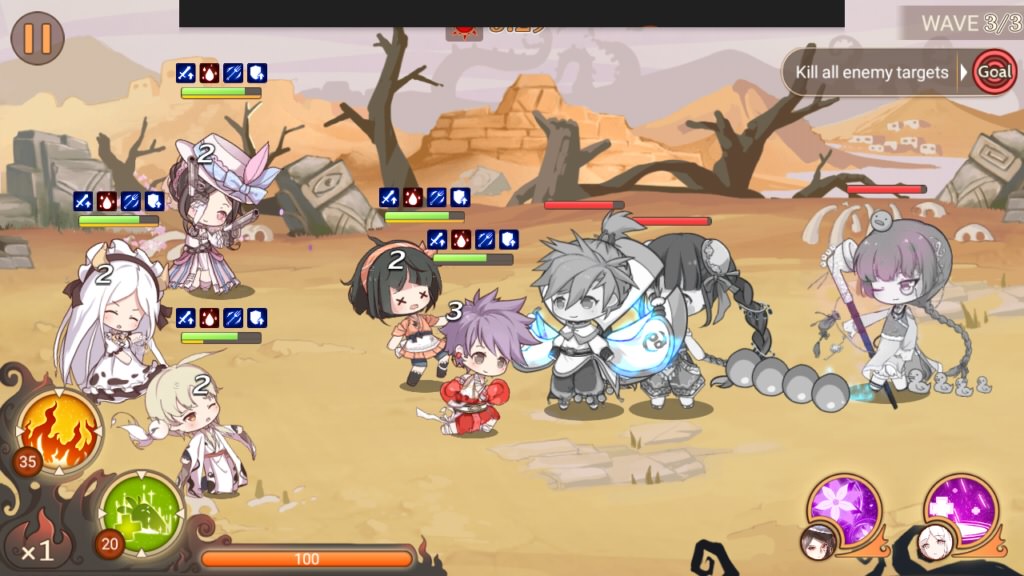 “It looks kinda nice” is the best thing I can say about Food Fantasy. Unfortunately, despite its lofty goals, it’s all downhill from here.

There isn’t much memorable about the sound design, aside from the voice acting being a little better than average for the hugely over-saturated JRPG phone game market. The music is just good enough to be completely unnoticeable, which is almost worse than if it were outright bad. Sound effects are a bit grating, especially since you’ll be hearing most of them ten thousand times. You can play Food Fantasy muted and not miss much.

I have to give developer Elex credit for their sweeping ambition. Food Fantasy has big plans and tries to do a lot of different things. Sadly, as is usually the case when you spread yourself too thin, you end up not being much good at anything.

Managing your restaurant happens in a pseudo-RTS setting, where you’ll assign your Food Souls to different tasks and have them try to fill orders on a tight schedule. Hiring better chefs and researching rare ingredients will increase your ability to create better food faster, and now you know all there is to know about that side of things.

Combat happens on an old-school Final Fantasy style field with ATB gauges, but it’s dumbed down even further. Characters auto-attack every few seconds, with spells, abilities, or critical hits triggered by tapping a slightly different area of the screen. Battles take far too long, sometimes dragging on for several minutes. In a game where combat happens a lot and isn’t very interesting, you don’t also want to make it take a long time.

Other equally dull mechanics include training and partnering up your Food Souls, “hatching” new ones, questing for new recipes and ingredients, and watching unnecessarily long cutscenes every few minutes. All of it amounts to bland number-crunching and none of it is very fun. Some JRPGs (mostly older ones) can get away with repetitive fetch quests and Herculean grind-fests because they’re backed up with an intriguing story driven by interesting characters. Take away those things and there isn’t much left to make a game out of.

In typical free-to-play fashion, you always have the option to spend real money on equipment and resources, the alternative is to spend an absurd amount of time grinding for them. It’s all extraordinarily lazy game design and there’s truly nothing here to write home about.

Food Fantasy ran just fine on a Google Pixel XL, maintaining a decent frame rate all along. Initial load times were long, especially when the game downloaded huge updates (1.7 gigabytes for a phone game?), but once it loaded from the main menu, it was smooth sailing.

Food Fantasy is not garbage, it’s just incredibly mediocre, which I think is worse in some ways; I can at least respect a game that tries something new, even if it fails in the end. Food Fantasy doesn’t innovate in any meaningful way, other than to attempt to combine several old, tired phone game mechanics in a slightly different manner – a task at which it definitively fails (I’m not sure it’s possible to beat the dead horse of generic phone games successfully). The breadth of its ambition is admirable in a certain respect, but entirely unfocused and far too scatterbrained. In my view, the best games have great stories first and foremost or at least engaging and interesting mechanics. Food Fantasy doesn’t even attempt either of those things.