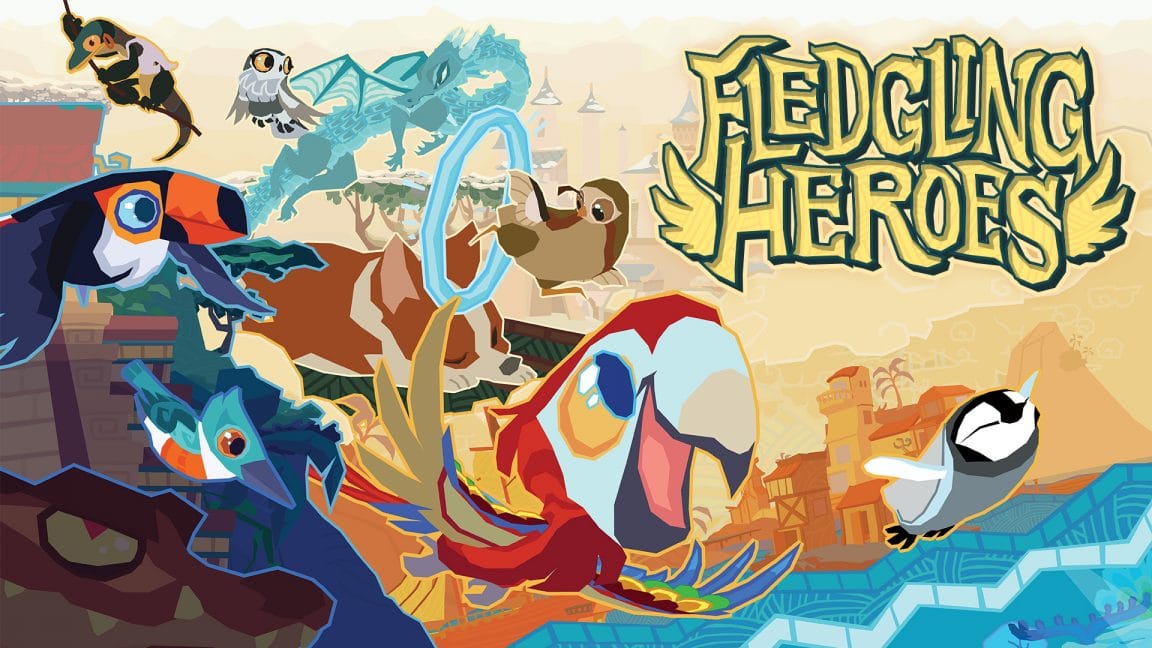 Fledging Heroes is sort of an odd game to review, as it feels like a highly polished version of about half of the games found on the early mobile market. Right from the start, the charm of the game is apparent through its storybook visual style and lighthearted story delivered by a rhyming parrot. The cohesion between both the story’s delivery and visual style shows how effort was obviously put into polishing this game, but the same cannot be said about the lackluster gameplay.

For the purposes of this review I will be separating the gameplay into two categories, user generated content and developer generated content. The basis of both types of content are the same. A level is formed of one or two challenges with collectables to be found along the way. These collectables include color pallets, level design objects, and skin swaps. The goal is to reach the end of the level collecting coins, feathers, and the previously mentioned collectables along the way.

Each level is played by one of six birds who are seeking revenge on the evil lizards (acting as the antagonist of the game.) Each group of levels are separated into different themed worlds with varying art styles.  In total Fledgling Heroes consists of three worlds all of which have two different birds to play as. This variety of six playable characters might seem like a good source of content variation, but, each bird plays similarly with the exception of one or two characters.

Each bird is controlled by tapping on the screen to gain altitude. As you can imagine not very many differences in gameplay are seen using this control scheme, making the whole experience repetitive in an oddly familiar way. This style of game is often seen in the mobile market (Flappy Bird originally came to mind), which makes sense seeing as this game was developed for the Apple Arcade. All of this falls under the category of developer made content, and if the game only consisted of these levels, I wouldn’t be able to recommend spending the ten dollars for this game. Notice that is said if, as there is still hope for some enjoyment in the user generated content mentioned before.

Fledging Heroes has a system similar to the popular game Super Mario Maker, and this is the most enjoyable part of the experience. After finishing a few levels players will unlock the Lab. Within the lab one can find user levels of varying difficulty and styles. This choice made by Subtle Boom Pty Limited, the developers of the game, exponentially increases the value and replay ability of the game. There are some fantastically creative gamers that have already created intricate and fun levels that add a whole new level of challenge to the experience. Every player has the opportunity to use unlocked items in the game to create grand levels and allow other players to experience new challenges.

I would suggest that anyone who enjoys creative level design and cartoon aesthetics should try Fledgling Heroes. At the price point of ten dollars, Fledgling Heroes more than fulfills its asking price with user generated content.

Pick this game up if you are wanting a casual experience on the Nintendo switch that resembles the simplistic design of mobile games and if you still have that Super Mario Maker itch to scratch.