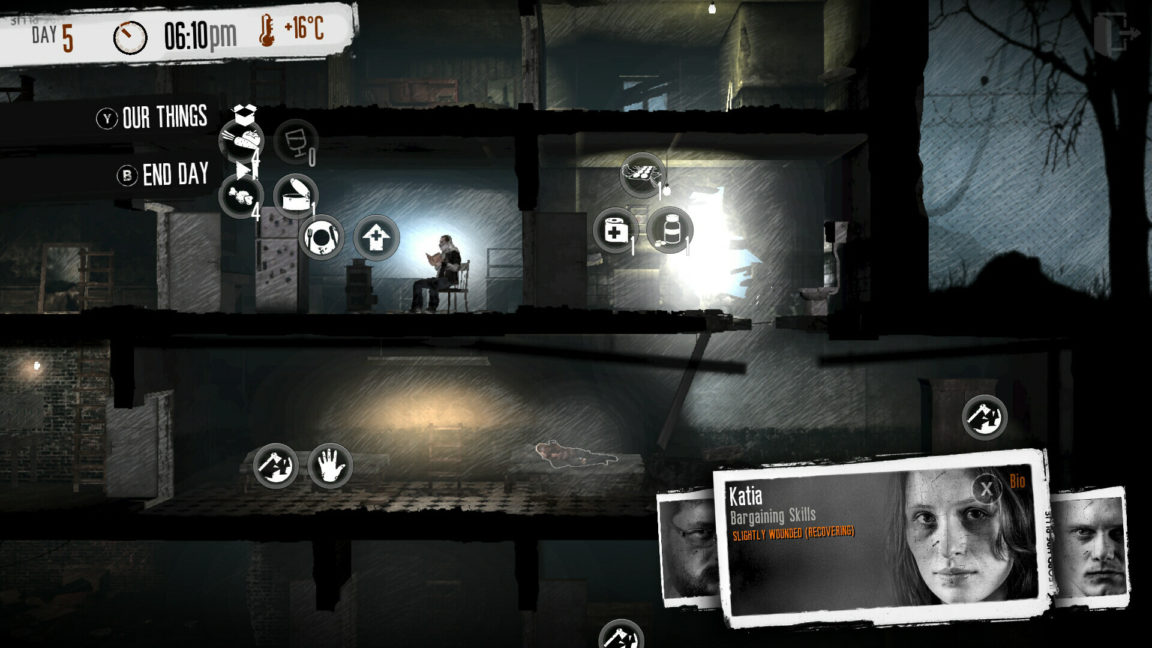 Depressing, bleak, and miserable.  These are the first words that come to mind when I think of This War of Mine.  It is also captivating and moving in ways I had not expected.  11 Bit Studios’ 2014 release successfully conveys the experience of being a civilian trapped in a war-torn locale; normal people struggling to survive a bloody conflict. With the 1992–96 Siege of Sarajevo during the Bosnian War as an inspiration, This War of Mine has a level of authenticity that few games can achieve.

This War of Mine is a survival game as its core.  Players initially take control of three civilians of varying backgrounds, seeking refuge in a dilapidated building with few supplies.   Decisions are made on a day-night cycle, with even seemingly inconsequential decisions potentially having devastating ramifications.

During the day, players tend to the personal needs of the civilians, including ensuring that they are fed, rested and receive any required medical treatment.  Resources can also be used to reinforce defences, craft weapons and supplies, improve workstations to allow the creation of improved items, and more.  Come nightfall, players choose whether someone will go out scavenging for supplies and resources, then choose whether those who remain will rest or stand guard to protect the shelter from raiders. It is in scavenging that This War of Mine really shines.  You can visit, and revisit, a variety of locations, including a construction site, supermarket, warehouse, hotel, and residential areas, and many more.  During these excursions, there are encounters with NPC survivors that can be avoided, helped, robbed, or killed.  After collecting as many supplies and resources as possible, it’s then a dash back to the entrance to return to the shelter with the night’s haul.

To say my first playthrough didn’t start well would be an understatement.  With the mentality that I must ‘win’, I took careless risks that got two of my civilians killed.  After erring on the side of caution with my one remaining survivor, I had a completely different experience.  I had to make use of trade options and take calculated risks on whether to defend the shelter each night or not.  Rather than building up a stock of food, every morsel was devoured each night for fear of a raid stealing it all, leaving my survivor with an empty belly.  Confrontations with NPCs carried an extra weight of suspense and stealth sequences had me holding my breath.

This War of Mine is often as harsh as its washed-out colour pallet, but surviving to the end of the siege feels like a monumental achievement.  If you have yet to play This War of Mine, I highly recommend it, particularly if you can only play in small segments.  It is a game that will stick with you long after the end of the conflict.