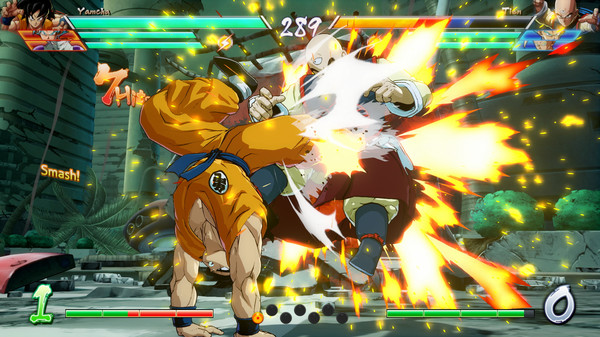 BY PIETRO MASCELLINO:  Dragon Ball Fighter Z is a fighting game developed by Arc System Works and published by Bandai Namco Entertainment.  It was released for PS4, Xbox One, and Microsoft Windows in most regions in January 2018, then worldwide for the Nintendo Switch in September 2018.

Dragon Ball Fighter Z has its strengths and flaws, although overall it has been a great success. Many fans even considered it the best Dragon Ball game ever made.

A story the diverges from the original one:

Dragon Ball Fighter Z is not the first video game instalment of the franchise, nor is it the first to tell a story that is completely different from the one in the anime or manga. Nevertheless, the originality presented by this story is amazing.

To summarise, the world is under the attack of mysterious waves that are incapacitating the greatest fighters. At the same time, clones of all the heroes and villains are attacking the population.  Given that all the fighters in the world are unable to fight, the only one left to save the earth from this threat is you!

Players take the role of a spirit that can control the bodies of the warriors and unlock their sealed powers. The main villain of the game is Android 21, the leader of the Red Ribbon Army, who possesses Majin Buu’s powers and voracity. Throughout the game, the player can unlock short side scenes between the cast of characters and, as in all the other Dragon Ball games, the game offers a happy ending.  That wasn’t a spoiler, was it?

Dragon Ball Fighter Z is a 2D, 3v3 tag team fighting game.  First impressions may lead you to think that this is a confusing, random mess, but if you persevere, you’ll find a game that truly rewards skill and reflexes.

The game is incredibly well balanced.  Players will have to think about team composition, combos, range and more if they want to master everything that the game has to offer. That being said, to make sure the game is accessible to casual players as well, Arc System designed it with only four main buttons and special and super moves are also very easy to perform. That gives a casual player the impression of competing without possessing too much experience.

For the pros, however, the game is much deeper. The game offers the so-called manual combos, which offer more variation and flexibility when fighting. Each and every one of these combos has its own cooldown, range, damage etc, giving the player flexibility in any given situation.

An important aspect of the gameplay in Dragon Ball Fighter Z is its speed.  While there are faster games, Dragon Ball Z feels smooth and quick, without being too fast for casual players to be able to reach.  Combining short combos with longer matches ensures that fights are usually reasonably well-balanced and that one-shot-kills are nearly impossible.

Overall, the gameplay offered by Dragon Ball Fighter Z is fun for both casual and pro players.

Dragon Ball Fighter Z is undoubtedly one of the best looking fighting games on the market. The game runs at 60 FPS, providing players with a smooth experience.

The lighting is detailed and each move, such as a Ki ball or Kamehameha, are exceptionally well-animated, giving eye-candy galore.  The game is full of small details that make it even more enjoyable to play.  For example, during a fight, the character’s outfits and even the stage can be damaged or completely destroyed.

The spectacular graphics of the game are supported by the original sounds effects and voices presented in the game.  This not only helps with immersion but will give a nostalgic kick for fans of the anime.

There is an abundance of quality fighting games on the market, such as Street Fighter V and Tekken 7.  With that in mind, I still don’t hesitate to say that Dragon Ball Fighter Z is one of the best fighting games of this generation.

Whether you are a fan of the Dragon Ball franchise or fighting games in general, you should definitely give it a shot!