BY CRISTIAN PUSCASU: DiRT4, as many of you may know, it’s a rally game, and one of the best car games in the last couple of years.  Everything about it looks polished and well made, taken care off. Nothing strikes out as odd (other than some weird lip syncing, but hell, it’s a car game, cut it some slack). They did many things right, and how they are supposed to be, and with some high-level game design, they managed to make it available to everyone. It doesn’t matter whether you are a petrolhead or you are a daily commuter driving a Prius. You can still get a lot of fun out of this title.

They are giving you two control options, and I am not talking about mouse and keyboard, controller, or steering wheel. I am talking about some presets, gamer and simulator. The gamer preset makes the car more forgiving, making the whole game feel more arcade, and a lot less punishing. Thus, it allows anyone with a bit of patience to learn the game and feel like a total badass driving through forests at high speeds. There are people who didn’t play a racing game ever before but still managed to find DiRT4 very forgiving and fun.

The simulator preset, which as the name implies, gives you an experience as close to the real life as they can give you. The car handles realistically, coupled with the rough terrain you are getting quite a tricky beast on your hand, and without the game trying that hard. This gives your car enthusiast a lot of fun, and maybe even more than some other racing games.

The handling overall feels very solid. You can clearly see they went above and beyond in it, seeing how the slightest car tune that you do changes the car handling dramatically. A little bump, driving on dirt, rain pouring, a damaged wheel geometry change the car handling, just like in real life. The sense of speed is insane. The maps are scaled to the game fantastically well, which allow you to feel 100 km/h (60 mph) like the actual 100 km/h. When you are going at 150 km/h (94 mph) you feel like you are blazing through the forest, and clinging to that steering wheel for your dear life. You can get a similar feeling out of a regular Need for Speed, but you need to get to speeds of well over 300 km/h (186 mph). 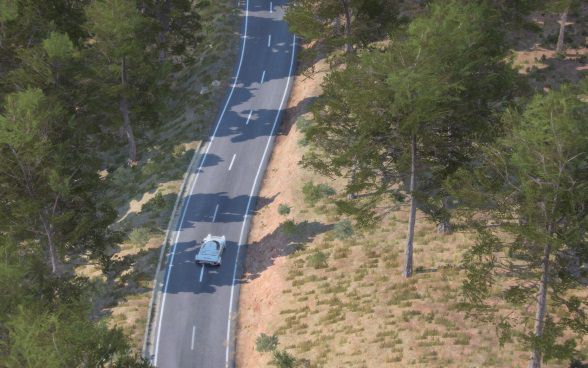 There are a lot of cars, from cars from the modern era, like a Ford Fiesta RS, Subaru Impreza, Mitsubishi Lancer, to name a few, which all handle really different from one another. They are also older cars, used in the Historical Rally, which is in fact quite aged, compared to our newer models, but just as capable. You can choose to drive a Mini like the one that Mr. Bean has, the BMW E30 M3, and much more which again, handle even more different than one another.

Each car has a specific engine-transmission layout, which tells you what wheels on the car will be the wheels powered by the motor. The FWD (Front Wheel Drive) cars, like the Mini, Ford Fiesta RS, and Opel Adam to name a few are all are very forgiving, they are a bit sluggish compared to the others (especially the Mini in which you look like a clown), and they handle really good for the speed that they get to, although they might understeer.

The AWD (All Wheel Drive) cars like the Subaru Impreza, Mitsubishi Lancer, Lancia Delta Integrale Evo, and others are very balanced and work fantastically well on every terrain. They have fantastic acceleration, give you a lot of options when it comes to how you want them to handle, have great stability, although they might have a bit of understeer or oversteer, and are generally quite long, thus a newbie will sometimes have a hard time judging how much space you have left on the road.

The RWD (Rear Wheel Drive) cars like the BMW E30 M3, Renault Alpine A110 S1600, Ford Sierra RS Cosworth, and others are literal beasts. They are very hard to control, especially in the simulator. They are always prone to oversteer, and most of the times if you are not careful you will spin out. You need to have good throttle control, which for a keyboard player this might turn out to be tricky. But, they are very fun to drive, especially on tarmac, have great acceleration, and awesome handling if you manage to control the oversteering.

The rallies are made up generally of different events, which in turn are split into multiple stages. The events take place in 1 of the 5 available locations: in the USA, racing in the autumn colored forests; in Wales, racing on the grassy plains and pine forests; in Australia, racing on sandy flats, and lush exotic forests; in Spain, racing on asphalted serpentines and small towns; and not but not least in Sweden, on snowy hills, sharp turns, slippery straights, and bumpy roads.

The locations themselves seem very alive. The races aren’t boring and you never really feel that you have taken the same course twice. While on the stage you can see a lot of eye candy: the varied audience which is watching the race, certain animals up and about, road signs which confirm you that you are going very fast, bridges, and the background which for the small amounts of time that I managed to admire (I don’t want to crash) is gorgeous.

The stages aren’t marked by who gets there first in a head to head race. They are marked by who gets there the fastest, and because of this you can always get the ability to catch up to others, that’s if you are driving perfectly for a couple of stages in the whole event. Trying to get there as fast as you can, while also looking at the checkpoint and time map on the left of the screen to see how you are doing against the record, really manages to get the blood flowing through you. You always find yourself with the desire of wanting to go faster and see that you are driving faster than your opponent.

The A.I difficulty is challenging, but not absurd. I played on the higher difficulty and I found myself sometimes utterly destroying people or pathetically losing with a huge difference of times. Although, most of the times we were pretty much even, me winning one, someone else winning one. The only times I completely destroyed is when I drove the Mini. That little car is such a blast to drive, even though it has a top speed of maybe 140 km/h, and that’s with the gear timings tuned.

While rallying, you don’t really know what the track is going to look like. You are only given a top side view of the track which doesn’t give you more info than telling you whether there are a lot of straights or many turns. That’s when your co-pilot comes in. He is going to tell you what turn it’s coming up, so you are always in sort of driving into the unknown mood, which more often than not gets really scary. Driving at 170 km/h into the unseen is very scary, especially when a sharp turn might come up or when a bump can ruin your 5-second lead. Really gets the adrenaline flowing and getting you into the mood.

The audio is fantastic. The cars feel like they have a lot of “oomph”, and they do. Even the little Mini feels like it’s going to blaze the track. Hearing the turbo whine, the engine revving up, tires squeaking, and gear shifting puts you into the driver’s shoes more than it already manages to do. The co-pilot’s instructions are very clear and natural. They managed to make the co-pilot feel like an actual human when he/she’s giving you the necessary instructions for the road. The turns are announced in what feels like complete sentences when it reaches a full stop you know there is a bit of a break incoming which allows you to put the foot on the gas. 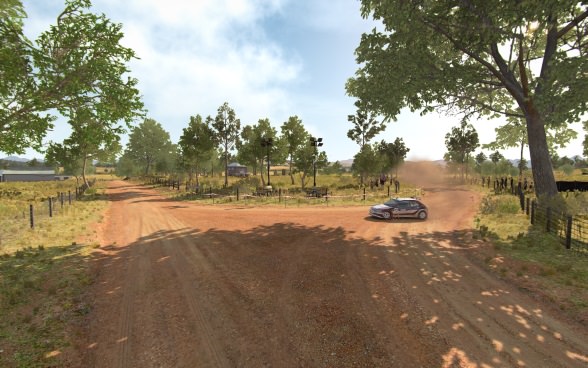 Graphics are as well very polished, and they managed to make them work on weaker PCs too. The cars look really nice with a lot of attention to detail. The scratches, dents, and car components actually look like real dents and they are not looking cartoony, nor giving a fake/exaggerated vibe. Textures are nicely made, making the environment stand out and making nature feel like nature. Foliage looks awesome, and coupled with nice lighting gives a bunch of interesting effects. Dust looks good, raining looks menacing in large quantities and serene in small showers, making puddles on the road which have a bunch of reflections.

There is a large feeling of progression. Enlarging the garage, building new facilities, getting better more resistant parts, hiring engineers and PR Agents, a multitude of well-known sponsors, buying a new car and messing around with it. There are also Rally Crosses and Land Rush races which are different than your regular rallies. All of this means new cars, new rules, more learning, more progression.

DiRT4 is a real treat of a game. It gives what it’s supposed to give, and it raises to all expectations that someone would ever have from a racing game with rallies. It blows you out of the water not because it managed to do a gameplay mechanic or a feature, which turned out to be extraordinary. It blows you out of the water because it did so many things right, and none wrong, which is extraordinary in today’s standards by itself.

It’s very accessible to everyone, be it a petrol-head or someone who is not that passionate about cars. The handling of the cars is just fantastic. This coupled with nice graphics, great audio, progression, and adrenaline manage to get you very fun experience.