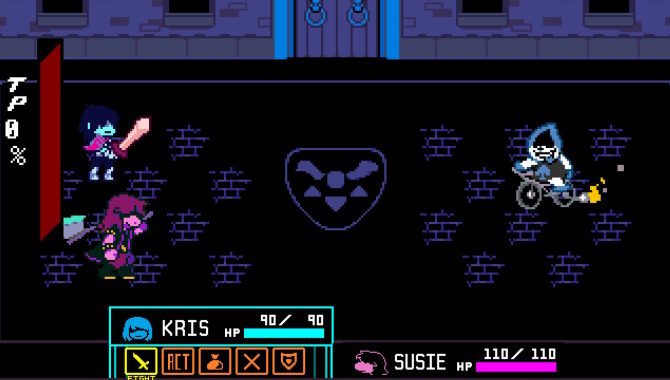 Warning for potential spoilers for the game Undertale.  You have been warned!

BY JARED JONES: Toby Fox’s Undertale came out in 2015 and wowed people immediately. The charming visuals and soundtrack, the unique approach to RPG combat, and the combination of meta-narrative and replayability made it incredibly unique.

As you can expect with such a well-loved game, gamers asked, ‘When will there be a sequel?’ Well, recently, Fox released a preview of a potential sequel – Deltarune.

Deltarune is labelled as chapter one but really, is more of a demo, likely to give fans a taste of what is to come and keep anticipation up rather than going dark for however long it takes for the game to be made.

Deltarune revisits a similar setting, but not identical. In fact, the game seems to almost be an alternative take on the universe of Undertale. You are introduced to similar characters, and your avatar seems to be similar to that in the first game but is given a name for you. You are told that, unlike Undertale, here, your choices do not matter. It leaves me wondering – it’s an interesting choice, but what does it mean? Does it leave the potential for a new take on the first game, at the risk of losing what made it so unique in the first place?

Regardless, the quality is still there – the art style is solid, and a pleasant reminder of the lovely visual journey from the first game. If anything, it has improved in some aspects, and the animations are smoother and generally higher in quality.

One major change to Deltarune is that, instead of playing a single character, you are given two additional party members.  Enemy sprites are slightly more detailed and show up on the field this time, too, so you can expect when to get into combat.

The sound design is fantastic, too.  Pleasant, atmospheric music plays through the zones you travel through, compliments the story and enhances the experience in battles.

I personally believe that both Undertale and Deltarune would be far poorer experiences without such high-quality music. It just goes to show that you do not need large orchestras or burgeoning production values, all it takes it solid compositions and a talented musician driving the production forward.  Some tracks are certainly worth listening to on their own, outside of the game. One of my favourite tracks in Deltarune plays when you meet the shopkeeper – it is brilliant.

The humour, of course, is still there. And boy, is it good. The cute, innocent, goofy humour, unique to Fox’s personality and previously seen in Undertale, is back with a vengeance.  Deltarune had me laughing out loud on numerous occasions. It doesn’t take much for this game to get you to at the very least, smile, and will get laughs from you easily if the humour isn’t too silly for you.

The game took me about four hours to complete, roughly, with some bonus content to pick at if you want to really squeeze some more time out of it.  Personally, I’m very pleased with what’s come out so far.  Likeable characters, great humour, atmosphere and adventure all made Undertale so wonderful and it is a joy to see Deltrarune follow this formula so closely.

Call it a demo or a preview if you will, but Deltarune certainly has me excited for whatever Fox has in store for us next.

Deltarune (at least the first part) is available for free from the official website.