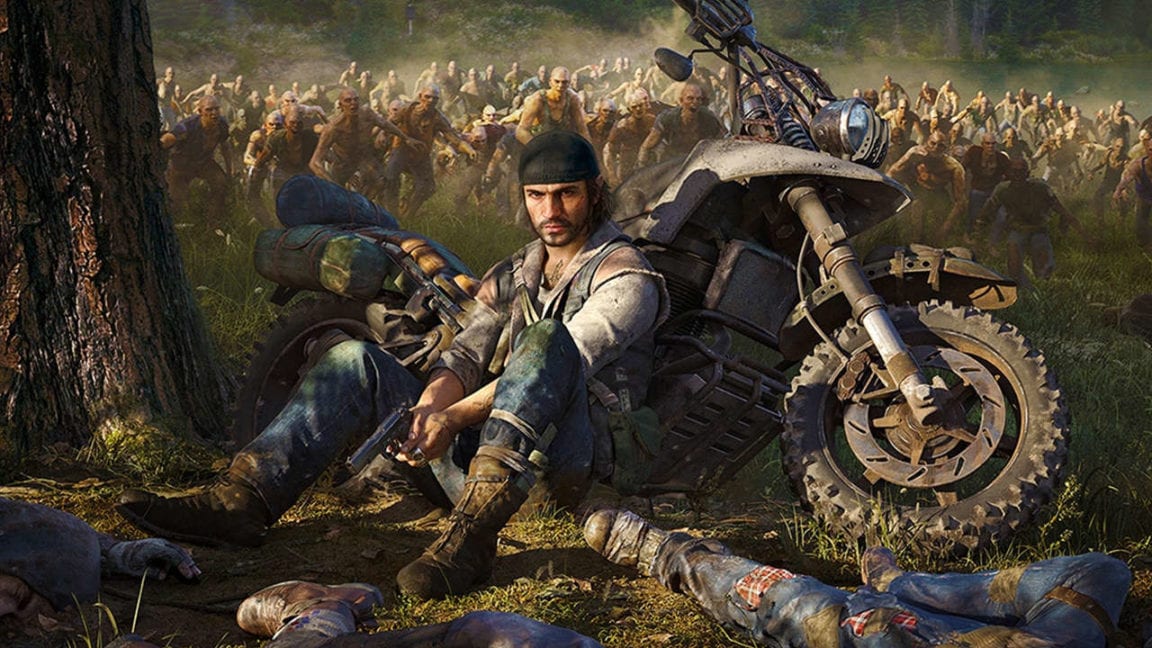 I was firmly sold on Days Gone the very moment it hit the industry almost three years ago at E3 2016. It ticked all the boxes I covet so much when picking new games to follow intently: open-world, post-apocalyptic, freedom, customisation and best of all, zombie-slaughtering adventure.

Fast-forward 33-or so months and Days Gone is finally sitting pretty in my PS4. I’ve invested a fair chunk of time into playing it and exploring the wastes of Farewell, Oregon as the gruff and effective bounty hunter, Deacon St John. I will say outright that my experience so far has been a very pleasant one, but it hasn’t been without its difficulties.

The wider community may be aware of the mixed reactions for SIE Bend’s survival horror epic, as it has met both damning condemnation and congratulatory praise in varying amounts, depending on where you look. Why exactly is it such a mixed bag, and what’s the honest opinion of someone who has sunk many hours into it since launch? Read on to find out… 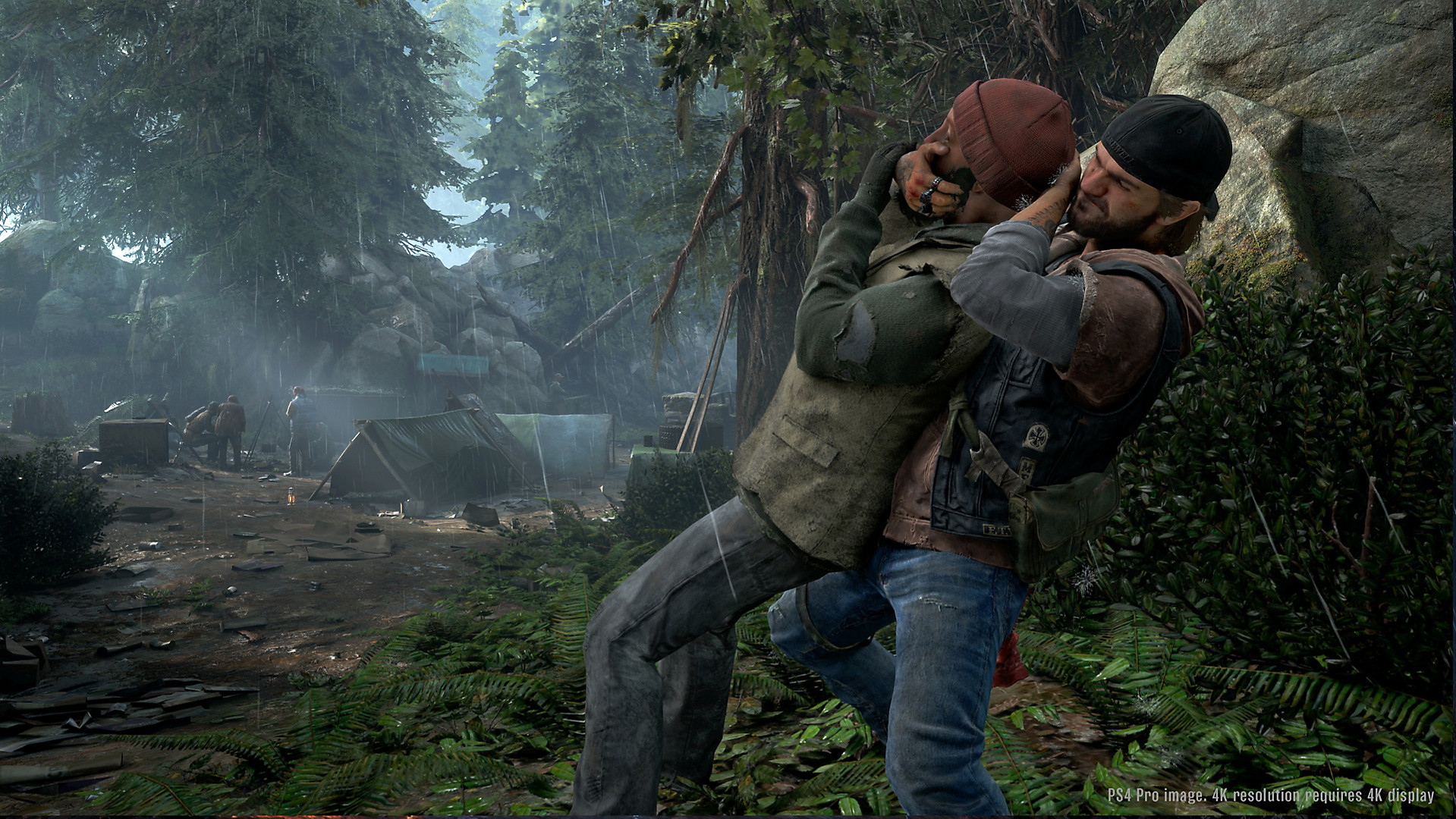 The World of Farewell

I’m a keen explorer – if a world presents itself to me, I’m going to traverse every possible path and road. I’ll dip in and out of every available building and try and scout out each and every collectable hidden throughout. One thing that Bend has done very well with Days Gone is creating a world with just enough in it to keep the player occupied.

We’re given a map with a strange construction – it’s quartered up into sections, each dramatically different to the next, giving the player the impression that they’re in a sprawling state. You can go from forest to desert, and from farmland to snowy mountains. Each is well-designed and pitted with features to find and places to discover. To ensure the player travels extensively, Bend has hidden collectables and enemy camps throughout, giving an incentive to travel out beyond the marked routes.

These varied locations play very well in-line with your sole form of transport – Deacon’s ‘Drifter’ motorcycle. Handling and manoeuvring of the bike change dramatically as the terrain evolves beneath him, and the ever-changing weather pattern and day/night cycle will change how you operate against enemies in the open-world. If it’s raining at night, you’re almost never going to be seen and heard, but if it’s broad daylight and sunny, you’ll be spotted a mile off.

In my opinion, it’s authentic. Yes, Bend has used slightly cheap tactics in having small biomes as opposed to one larger map, and they’ve massively restricted the speed of the motorcycle to make sure you’re not zipping from point to point, but it feels like a genuine post-apocalyptic world should. Nature, roaming undead and devious enemies make for an eventful journey wherever you go, and for the most part, each ride you take is different. 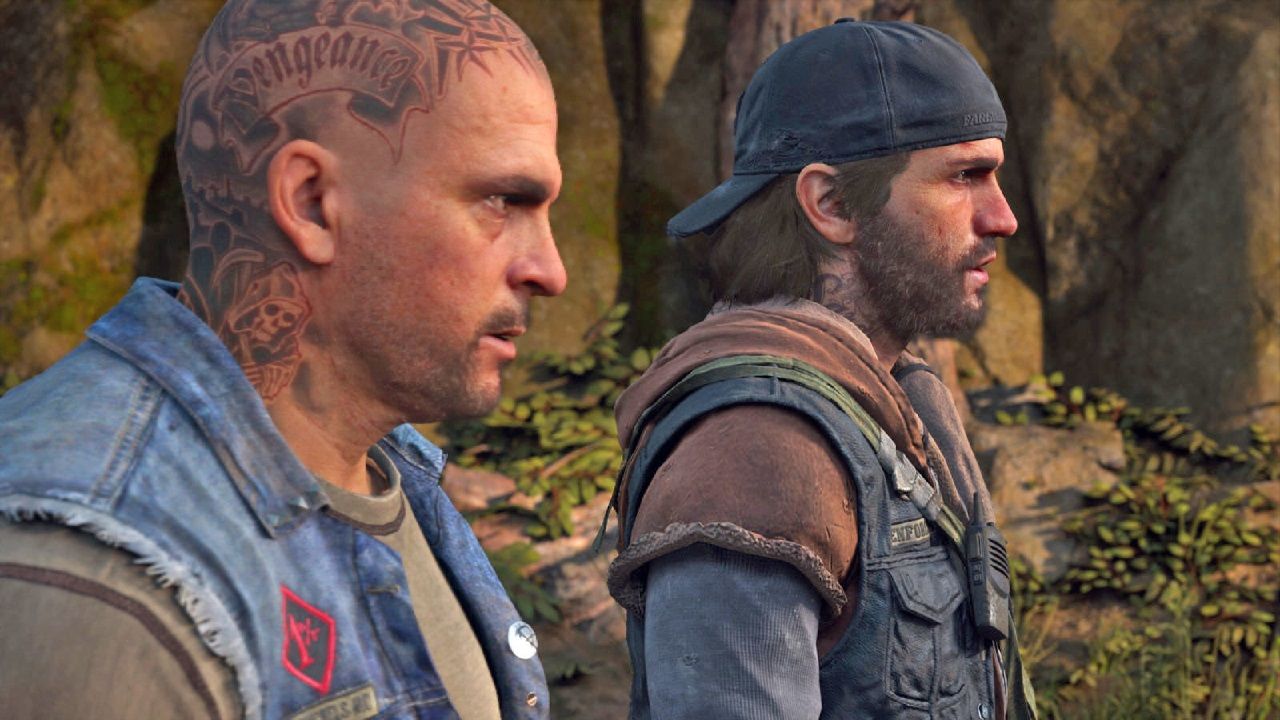 The People of Farewell

This is likely my biggest gripe with Days Gone: the NPCs. While the main characters are quite well designed and aesthetically pleasing, the general populace of Farewell is bland, duplicated and quite simply, strange. Deacon and his compatriots are individually and uniquely designed and have their own quirks and mannerisms (to an extent), but the Tom, Dick and Harry NPCs out in the world have nothing to set them apart from each other. I know that’s a common occurrence in these kinds of titles, but I mean nothing. They’re almost identical from place to place.

As you adventure across the world, you have the opportunity to assist citizens in their survival as some may be trapped in vehicles by ‘Freakers’ (Days Gone’s undead), captured by enemy gangs or just stranded and outnumbered. The conversations that occur with these citizens are the same every time, and the dialogue is strange and unnatural. It brings into light more than one of the opportunities Deacon takes to repeat himself ad-infinitum. As you explore the world, you’ll find plenty of occasions in which our badass-biker protagonist utters the same lines over… and over… and over again.

There is a range of “camps” scattered around the multiple biomes that Deacon is charged with helping. It’s a very simple system – you help the camps, your trust level increases, and thus you unlock more customisation or purchase options. That’s the pinnacle of community interaction in Days Gone, unfortunately. It seems Bend missed a great opportunity for development here, as the only people you can really interact within these locations are the camp leaders and vendors – everyone else is faceless and has no purpose.

Fortunately, the enemies are quite fun to battle. There’s a varied bunch of generic bad-guy enemies, as well as the Freakers (again, of multiple types) to engage with, scattered throughout the map. Each has their own tactics and style, and gunplay is satisfying and can be mixed up depending on what you like to wield. The AI is a little on the weak side, which leads to very forgiving stealth, but it’s not game-breaking. However, Bend’s insistence on including forced-stealth missions against enemies that are “impervious to your attacks” is a very cheap and devious tactic… 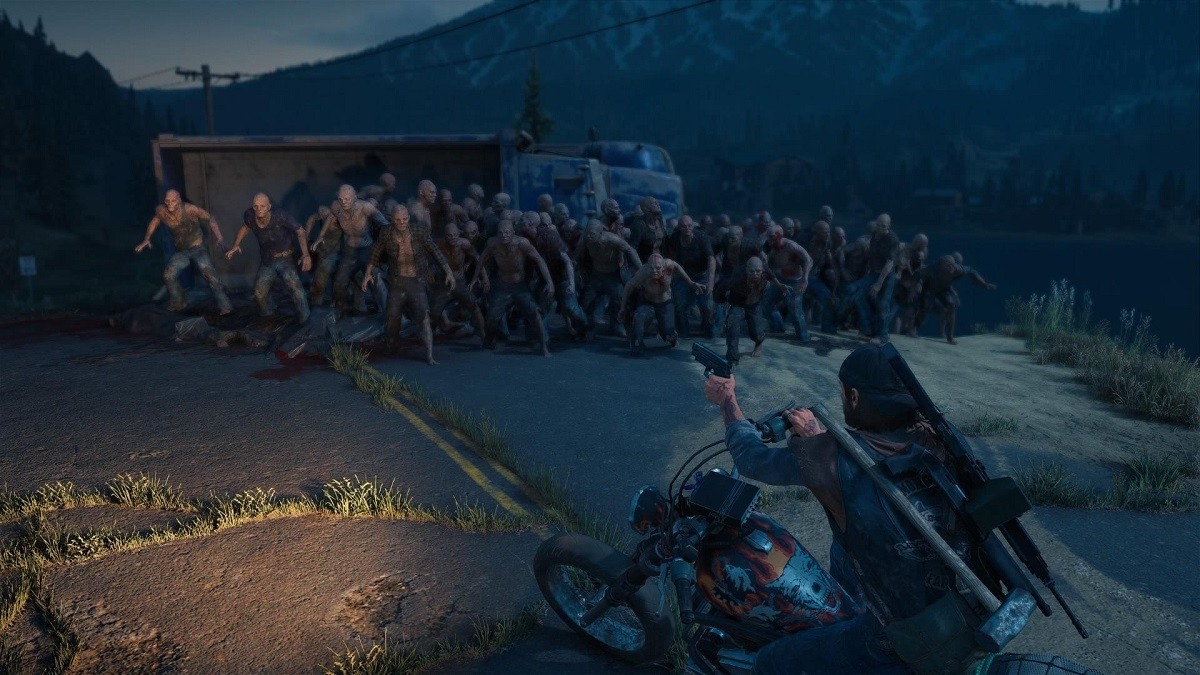 The Survival of Farewell

I’ll be frank – it’s not hard. Bend went on file many times as claiming Days Gone to be ‘nothing but difficult’. They stated it wouldn’t have a difficulty level and would be tough by default. However, one of the first things you do in Days Gone is to pick a difficulty level… Strange. I’ve found that the only time this game becomes traditionally ‘difficult’ is when swarmed by Freakers. In that situation, you’ll die hard and fast, every time. If you’re tactical, you can survive with ease in any situation.

Resources are plenty and, in most cases, they respawn (particularly the fuel for your motorcycle). Ammo isn’t hard to come by and crafting components can be found everywhere. On that note, crafting can be done on the fly with little more than a pop-up menu interaction, and your inventory is massive and well-equipped (as the game goes on, of course). If you enter a fight tooled up and stocked with medical equipment and explosives, you’re golden every time.

In my opinion, it’s quite a good approach to the post-apocalypse. The world has ended, but it’s not hopeless. The camps exist, people can explore and there are folk that exist to clean up the Freakers. While you’re a total lone ranger, it’s up to you how you approach each scenario. The paths are limited, but they are there.

What the game lacks in general survival, it does make up for in horror aspects. I haven’t experienced more tension in a game in recent years than I did walking through a cave complex in Days Gone with nothing other than a yellowy torchlight to guide me. I turned a corner and was faced with around one hundred Freakers, all startled and charging towards me as I fumbled with the controller, desperate to escape.

This brings me to another aspect – the Hordes. As shown in the earliest of gameplay, the hordes are an impressive spectacle, with hundreds of Freakers piling over themselves to bring you down. They form mini-boss battles in themselves, and you have to go in prepared, or you are well and truly screwed. The Freakers are quite a neat enemy, nicely designed and have aspects of intelligence to them, thus creating some of the most enjoyable moments of the game as you battle them. 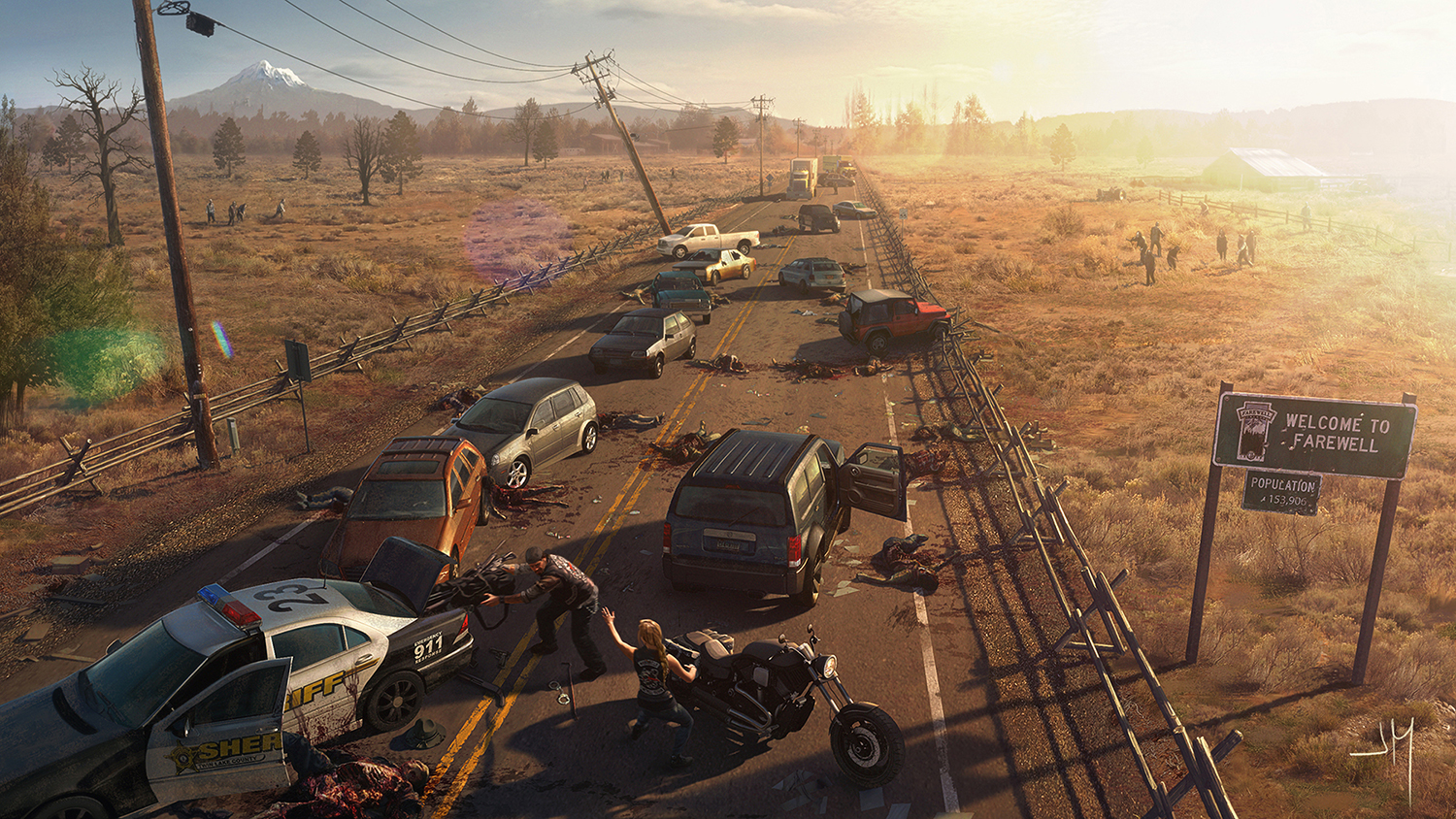 The Story of Farewell

The point of your existence in Days Gone is extremely simple and free from convolution: survive and move on. There’s a nice smattering of side missions to pick up, but the base of the main story is so easy to follow it’s almost child’s play. Bend has written in a collection of flashbacks that offer a nice back-story to the game, but it’s ultimately cliché and the twists or developments can be seen coming hours before they occur.

There isn’t much in the way of ambience: Days Gone has a limited soundtrack that only really perks up in dire situations like a horde chase, and the world itself relies heavily on the sounds of nature and the ever-present Freakers. However, there are some gratifying scenes that are twinned with fantastic songs that work extremely well and offer a change of pace.

Overall, it ebbs and flows. The missions don’t have a huge amount of variation but they’re enjoyable and swift. Most missions involve heavy use of your motorcycle, which isn’t a negative as riding the thing is intense fun throughout. And, as previously mentioned, you have a considerable open-ended approach to tackling missions. 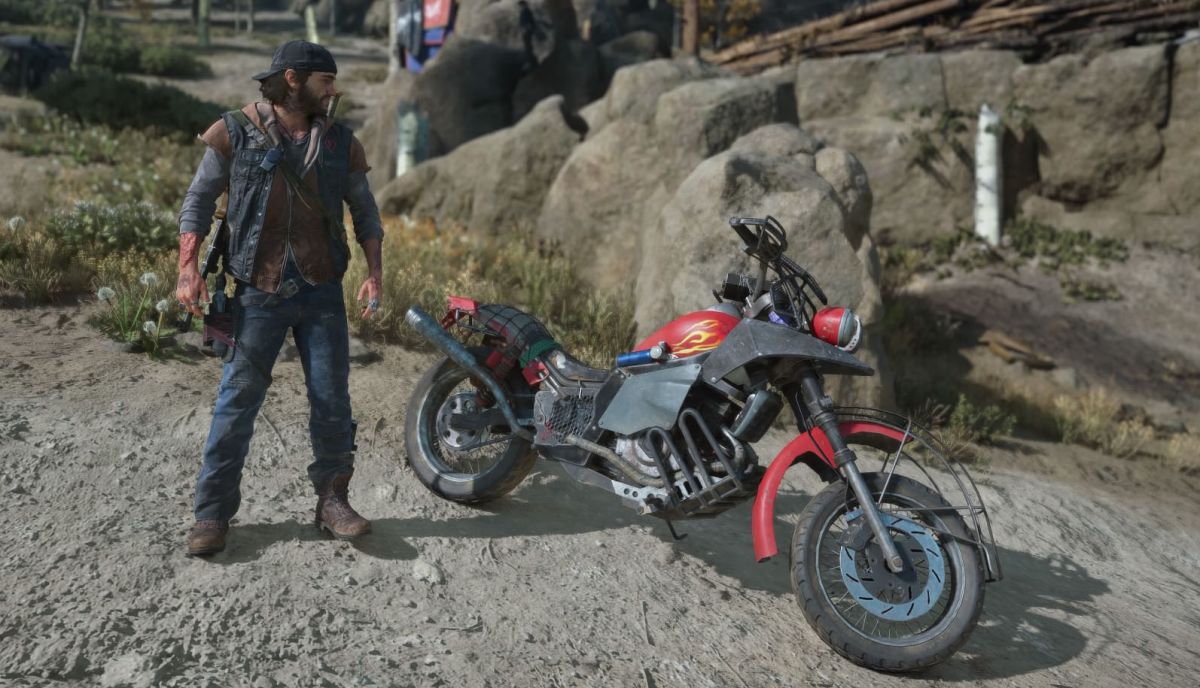 Conclusion: Should You Buy, Wait or Avoid?

Let’s evaluate. Days Gone is a fairly decent title for those that are fans of the genre, and an enjoyable romp with enough content to keep a player occupied for a decent chunk of time. The story is cliché, but enough to keep anyone engaged and interested. While the graphics are brilliant and the world authentic and great to explore, the title is plagued with frame rate issues at the moment that can have a very negative impact on play.

Ultimately, Days Gone meets expectations but doesn’t do much to exceed them. Bend has a lot of room for expansion here, but I think they’d have to show some potential very soon or risk losing their place in the market, as the game has no replayability and suffers from some harsh limitations. However, if you’re looking to gas around a wasteland on a motorcycle and do battle with a five-hundred strong horde of Freakers, this is the one for you.