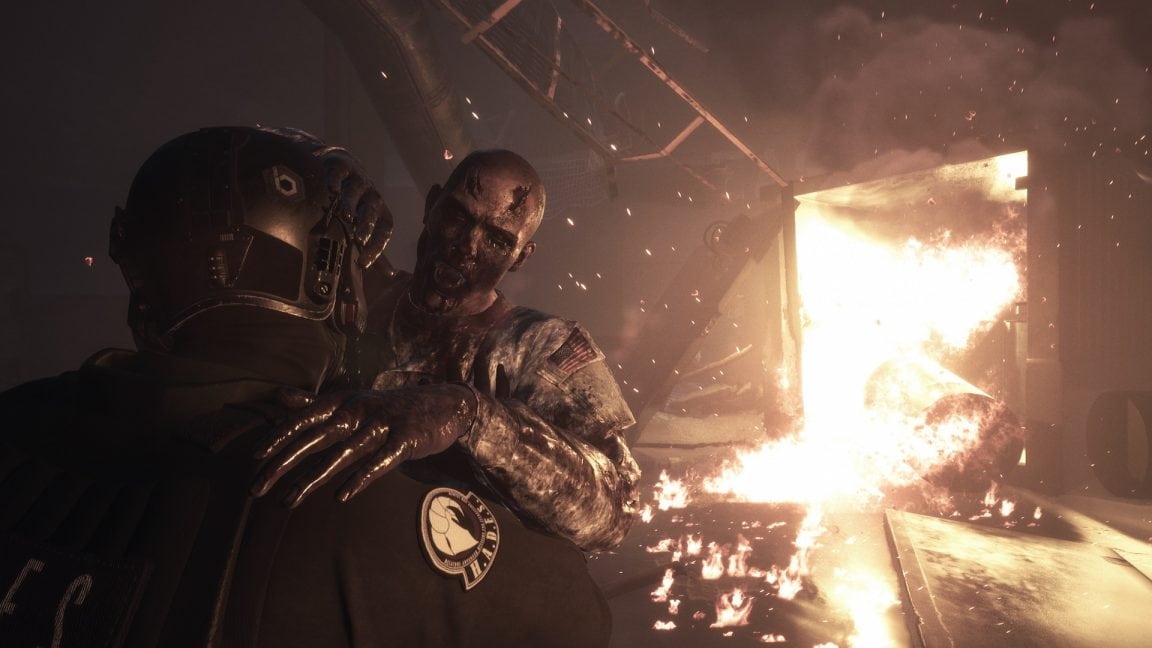 If you loved the clunky survival horror games from the late 90s and early 2000s—or if you’re both a horror fan and a borderline masochist—then you’ll find a lot to love about Daymare 1998. It’s far from perfect, though, and its numerous, glaring flaws will frustrate some players to no end.

By the way, seriously: Check your corners. They’re super dangerous. This is so important that I put it in the title. You’ve been warned.

Throughout the game’s brisk four-hour campaign, you’ll jump back and forth between three different characters. Two are shady special-ops types working for Hexacore (the game’s version of Umbrella from Resident Evil) and the third is a small-town forest ranger caught in the middle of yet another zombie outbreak.

Man, the 90s were such a bad decade for undead disasters.

Developer Invader Studios has made no secret of the fact that Daymare is a love letter to 90s survival horror. Remember when the remake of Resident Evil 2 was initially an unauthorized fan project until Capcom politely shut it down? Invader Studios was behind it. Rather than let all their hard work go to waste, they repurposed much of into Daymare, an original story packed with references to horror games, movies, and books ranging from mainstream to fairly obscure. 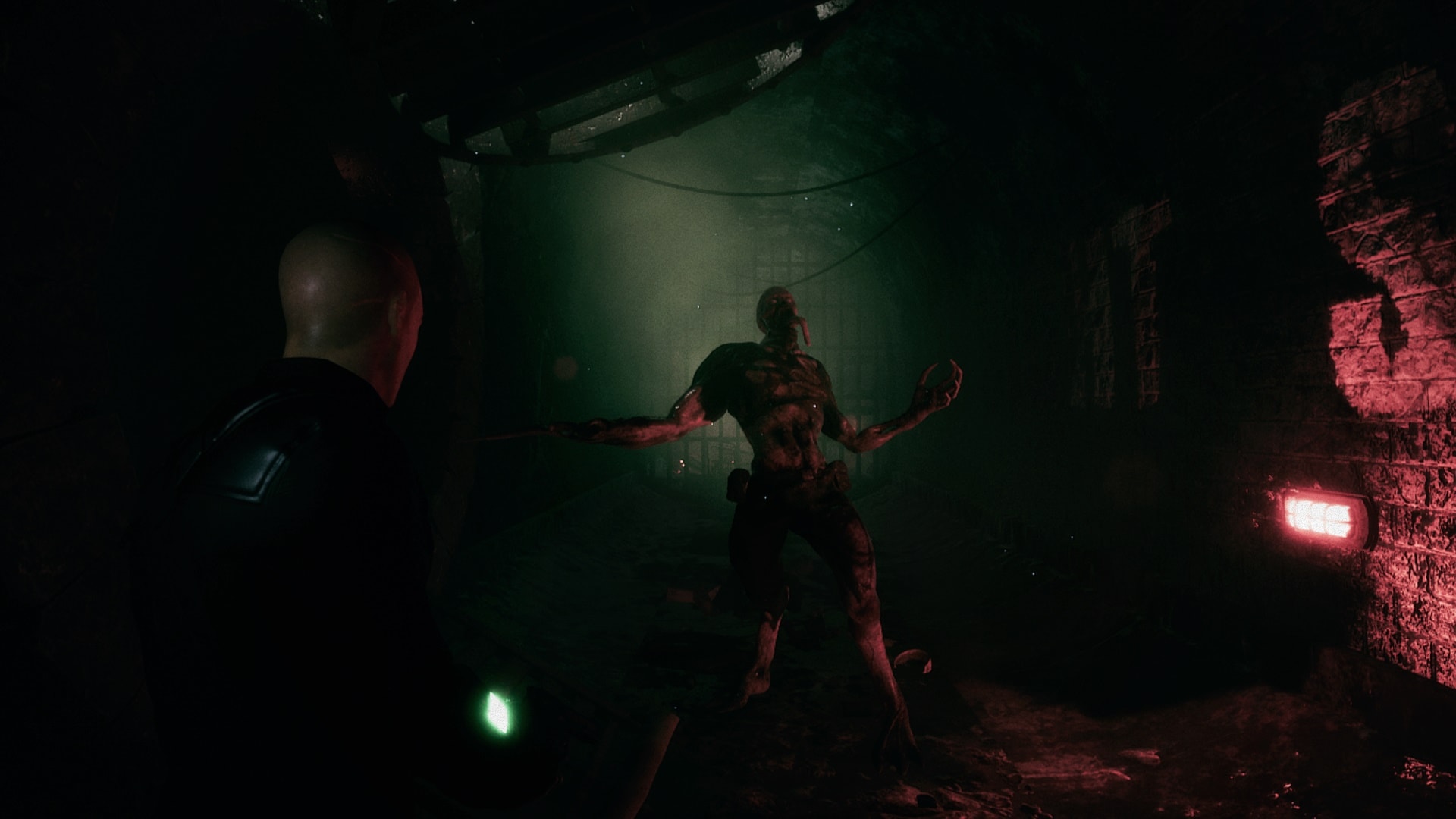 Unfortunately, the plot of Daymare 1998 makes almost no sense. There are loose, sketchy connections between various characters and events, and an ultra-vague conspiracy at the center of it all, but by and large, the reasons for the characters to be doing what they’re doing are nonsensical or nonexistent. Survival horror game scripts are rarely on par with Hugo novels, and that’s okay, but they should at least be tightly written and drive the action in a coherent way.

Daymare‘s dialogue and written text are plagued with typos, grammatical errors, and bad translations, too (the game was developed in Italian). There are also numerous, anachronistic oversights—for instance, gas didn’t cost anywhere close to $3.75 in 1998, and the washers and dryers you’ll see in a laundromat are too sleek and modern to have existed back then.

All in all, Daymare‘s story and writing are a hot mess, but the game does have some real strengths in other areas.

No matter how Invader Studios may have erred, nobody can say they lacked ambition. Daymare‘s mechanics are both a mixed bag and a study in extremes; almost without exception, they’re either excellent or terrible.

The game takes resource management to a new level by requiring players to manually load bullets into magazines and to carefully weigh the pros and cons of fast and slow reloads. Quick reloads drop the old magazine on the ground, and you’ll have to pick it up later, or else leave it behind forever. Slow reloads store the spent mag in your inventory but take much longer. If you find yourself with no spare mags in the middle of a fight, you’re probably dead. Spare mags are rarer than gold, so leaving one behind is majorly painful—but if the alternative is fighting off another whole horde to retrieve it, you may have no real choice.

Such frantic, lose-lose decisions are one of several things that make Daymare so polarizing. Personally, I love these sorts of mechanics; having to carefully and manually manage your ammunition adds a layer of tense realism that many other horror games never achieve. On the other hand, I can totally understand why some gamers don’t want to mess with this kind of thing, especially given that time doesn’t pause in menus and you can be chewed to pieces while trying to load rounds. 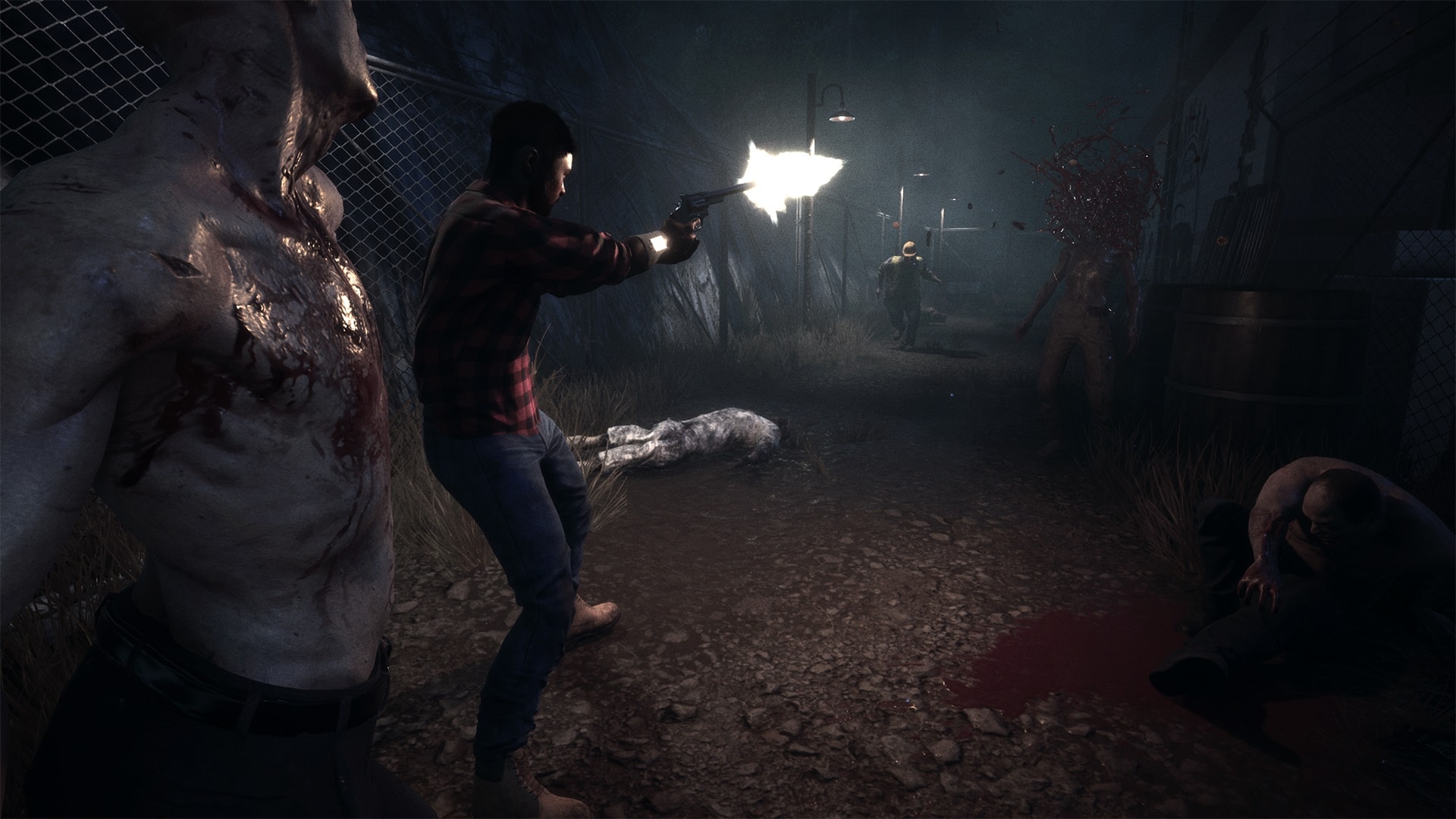 Unfortunately, the process of actually using those bullets is less fun. There’s a significant and unnecessary delay between most actions—running, slowing, switching weapons, aiming, firing, reloading, and using items. As a result, combat almost always feels slow and clunky. You’re denied speed when you need it most, and many of your deaths will likely be attributable to having to wait two full seconds or longer before you can do what you want to do. The only real remedy to this problem is to keep as much distance as possible between you and your enemies at all times—good advice for horror games in general, but it’s virtually mandatory here.

However, it’s nearly impossible to keep your distance during the game’s five boss fights, only one of which makes any sense. The other four are arbitrary, clearly designed to make you waste a bunch of ammo—and it’s hard to believe that your character would do anything other than flee, especially given the game’s otherwise relentless emphasis on avoiding danger whenever possible. Each boss fight pits you against boring bullet sponges that chase you around in circles, and the pattern is always the same: Get a bit of distance, squeeze off a shot or two, then do another lap around the room. It’s far more tedious than terrifying.

Oddly, Daymare‘s regular enemies are way scarier than its bosses. On the highest difficulty, any regular chump can shave off a third of your health, and the mini-bosses can sap close to three-quarters of it in a single attack. Healing items are incredibly scarce, so you absolutely must avoid taking damage at all costs. Many of the game’s best and most thrilling moments involve sprinting across town, weaving between dozens of zombies, and carefully managing your stamina so you’ll be able to book it past the next horde. 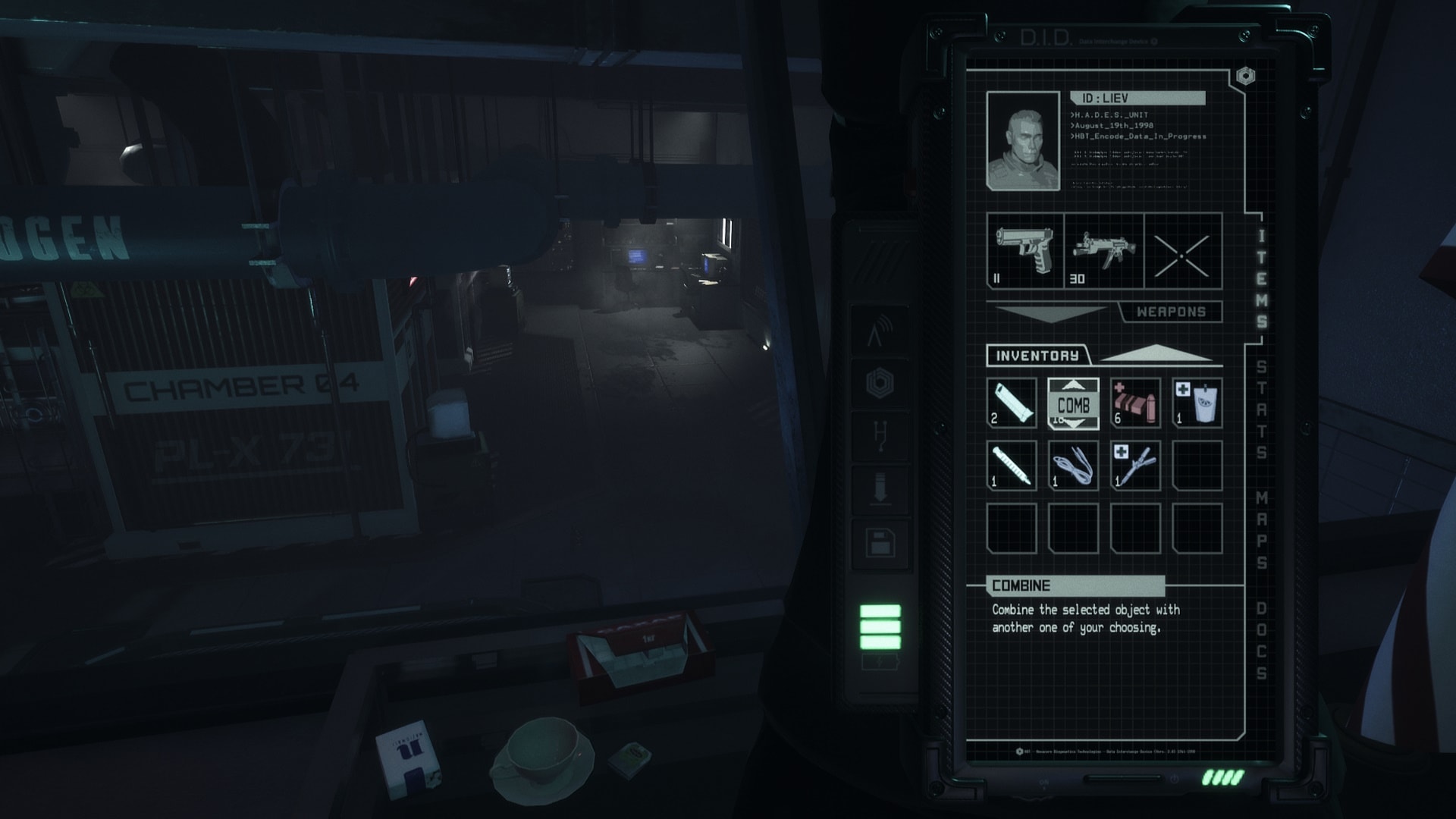 There’s an interesting and unique twist that affects nearly all enemies—one you’ll need to be aware of in order to make good fight-or-flight decisions: Most regular foes have relatively low health but regenerate it within seconds. Each time you commit to pulling the trigger, you’ll need to decide whether to pop off two or three rapid, clean headshots—which will drop but likely not kill your target—or to expend the extra ammunition to guarantee a kill. Ammunition is scarce, so you shouldn’t fire any more than absolutely necessary, but if you suspect that you’ll revisit the area later, if may be worth going for the kill so you’ll have one fewer threat to contend with when you come back. On the highest difficulty, I sometimes decided to skip certain areas entirely—the risk of running into something I couldn’t handle was simply too great. In my mind, that’s great horror game design.

The game’s puzzles, of which there are roughly twenty, are generally well-balanced and entertaining to solve. There is minimal hand-holding, and in many cases, you’ll need to pay close attention to your surroundings and flex your inductive reasoning muscles to figure out what you’re supposed to do. There’s even a file and note system that utilizes a real-life website. This idea is really cool, but alt-tabbing out of the game to navigate the site and punch in passwords eventually gets tiresome once you realize that almost none of those files contain anything important. (Plus, it seems quite odd that mundane documents, such as little Susie’s diary about typical ten-year-old girl things, are encrypted in some corporation’s restricted database.) The system would have been more effective if it had been used only for a handful of critical documents.

Overall, Daymare‘s world is a ludicrously dangerous but often frustrating or tedious one. If you don’t mind linear level design, frequent backtracking, freakishly strong enemies, and micromanaging your inventory—in other words, if you don’t mind being the prey and not the hunter—then you’ll likely find the gameplay experience imperfect but generally satisfying.

Daymare is a low-budget game from a small indie studio, and that shows in its visual and sound design. Much of that is forgivable, though, largely because the game is explicitly intended to hearken us old folks back to the birth of survival horror games. The voice acting is ultra-cheesy, but again, so was the voice acting in most of the games that Daymare is tipping its hat to. I got the sense that the stilted dialogue was at least partly intentional.

Many of the sound effects, including the pistol and magnum weapons, are a little flat and dull, but only a little. The shotgun, though, roars powerfully (and hits wonderfully hard, unlike many other game shotguns that seem to fire confetti). The game’s soundtrack is sparse and generally fails to inspire much emotion. The boss battles, in particular, are accompanied by generic strings that I quickly tuned out. Large sections of the game lack any music at all, and frankly, I’m okay with that. I’d rather have no music than mediocre music, and in horror games, silence is often a good way to make players uncomfortable. I’d have given Daymare higher marks for music if it had none at all.

Daymare ran very well on my rig, which contains an i7-7700K CPU, a GTX 1080, and 32GB of RAM. My average frame rate was in the 80s on “Ultra” settings, although I had two brief periods of seemingly random stuttering that quickly resolved once I’d moved to the next area. I experienced no crashes and noticed no bugs other than a few isolated instances of inconsistent responses with regard to keys that I’d remapped.

Daymare is definitely one of those games that most people either love or hate. It’s my job to be objective, and I’ve done my best to give it a fair shake. It’s clear that the developers poured an enormous amount of passion and love into this game, and that alone deserves kudos. They had admirably ambitious ideas, some of which worked very well. Unfortunately, others fell short. The final result is a short game with little replay value that may bore or frustrate modern gamers but nonetheless faithfully recreates the classic survival horror experience. Diehard horror fans who can overlook clunky mechanics may be happy to pay full price whereas those who expect a thoroughly polished experience will likely be disappointed. The rest of us should wait for Daymare 1998 to go on sale.