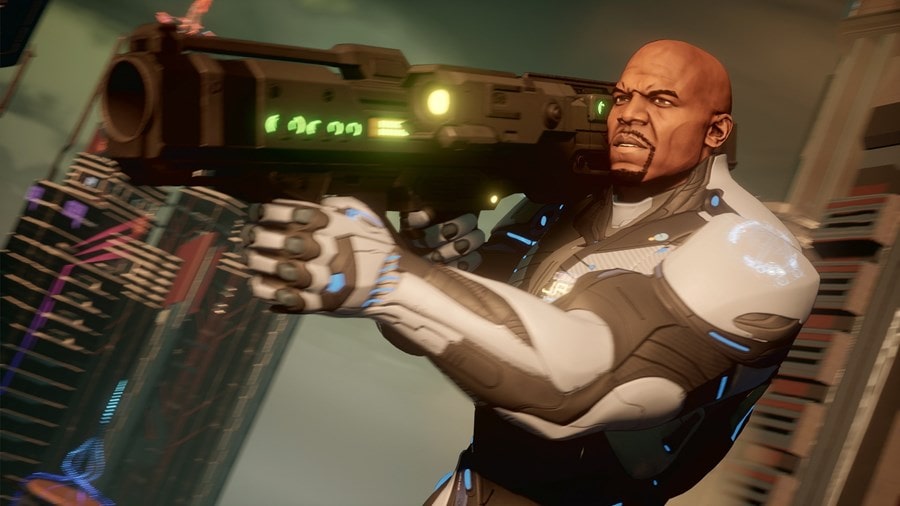 I have never played a Crackdown game before so any similarities to previous entries will most likely go over my head.  Thankfully, Crackdown 3 has no real plot and very little in the way of lore, so jumping in was as easy as pie.

In Crackdown 3, players control one of several Agents tasked with simply destroying the Terra Nova corporation and liberating a secluded island called New Providence. There are several villains but honestly, explaining anything about them or their motivations would take more time than their actual time on screen. The main antagonist is Elizabeth Neiman; Elizabeth had the potential to be a fun and crazy villain but literally doesn’t do anything other than laugh maniacally and order her men to destroy you. It’s disappointing that the main antagonist is so underwhelming but Crackdown does its best to distract you from this and its other mediocre features with explosions and action.

Even less can be said about her generals who control different sectors of New Providence and act as the game’s bosses. They are few and far between, and only ever pop up 20 seconds before you have to fight them. If it wasn’t for your two allies Echo, a militia fighter, and Agency Director Charles Goodwin, constantly reminding you how evil Terra Nova is through non-stop radio chatter, it would be easy to forget who and what the fight is for.  Even the Crackdown 3’s protagonist, Commander Isaiah Jaxon (played by the wonderful Terry Crews), is little more than a character skin, only ever speaking during the game’s intro. 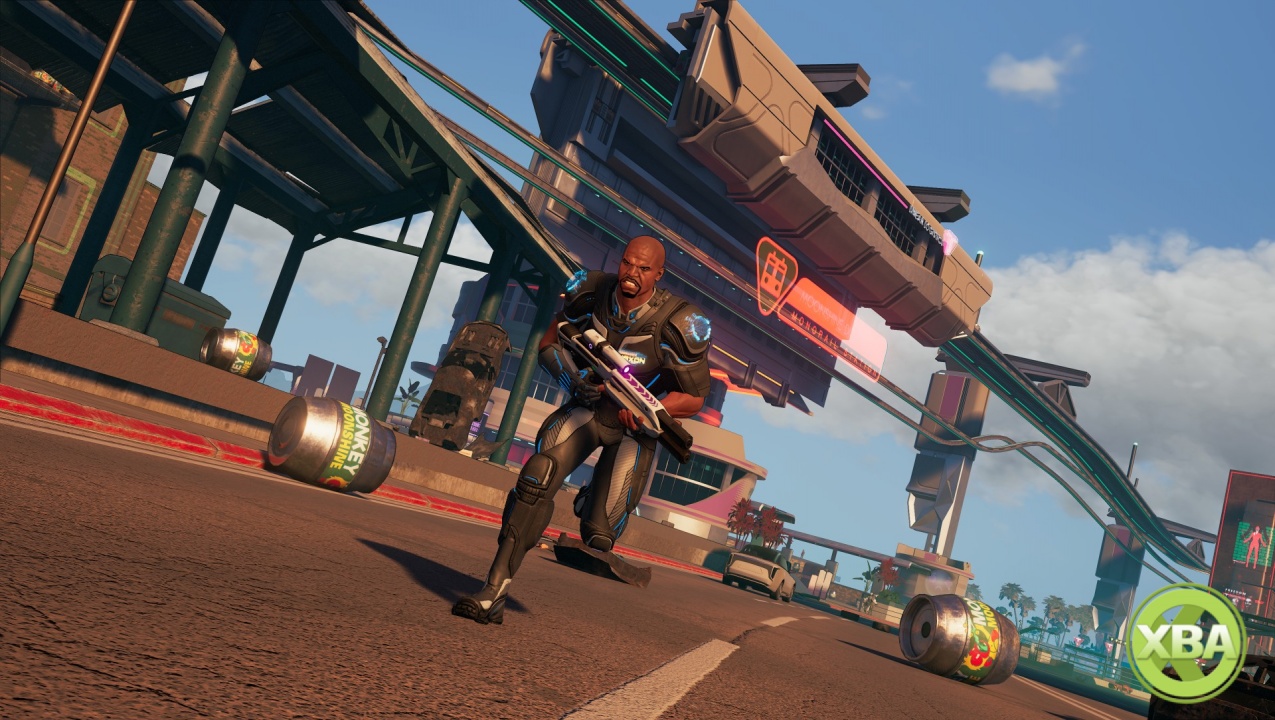 Normally, the limp story would be a huge issue for me – there is nothing I love more than a well crafted and intriguing narrative – but luckily the bombastic gameplay and the absolute power trip that Crackdown 3 offers had me hooked so hard that I didn’t care that the game’s story was as deep as an episode of Peppa Pig.

As a member of the Agency, your main goal is to scale the massive Terra Nova Tower in the center of the city and destroy the evil corporation within.  To do this, you must collect power orbs and upgrade your Agent’s abilities.  New Providence as a locale is massive, diverse and serves as an excellent playground for the mayhem that ensues. There are industrial areas, slums and huge commercial districts that all lend themselves excellently to the crazy abilities within your arsenal.

My biggest complaint is that New Providence lacks the soul necessary to make it feel like a living, breathing place.  It all feels very artificial, with a lack of NPCs to interact with and a deficit of side missions to take on.  The world feels vast but empty.  It is also a big disappointment that the ultimate building destruction that was promised early on in the game’s development is dedicated solely to the multiplayer mode, Wrecking Zone – but, more on that later.

There is no actual mission structure to Crackdown 3 and New Providence is completely open to you from the start, allowing you to tackle any sector and boss at any time. While this perceived freedom is refreshing, your agent’s abilities in the opening hours restrict your ability to take on the higher level enemies and reach the later areas of the game.  From the get-go, your agent can do little more than jump and shoot, so you don’t really stand a chance.

Abilities are unlocked at a steady pace and are your standard affair. You will unlock a ground pound, triple jump, double glides along with various weapon and vehicle upgrades. With all the abilities unlocked, your agent is essentially a God amongst men, triple jumping and gliding past enemies as you rain down explosive hell.  This makes the later hours extremely fun as you perform insane manoeuvers to defeat the enemy. 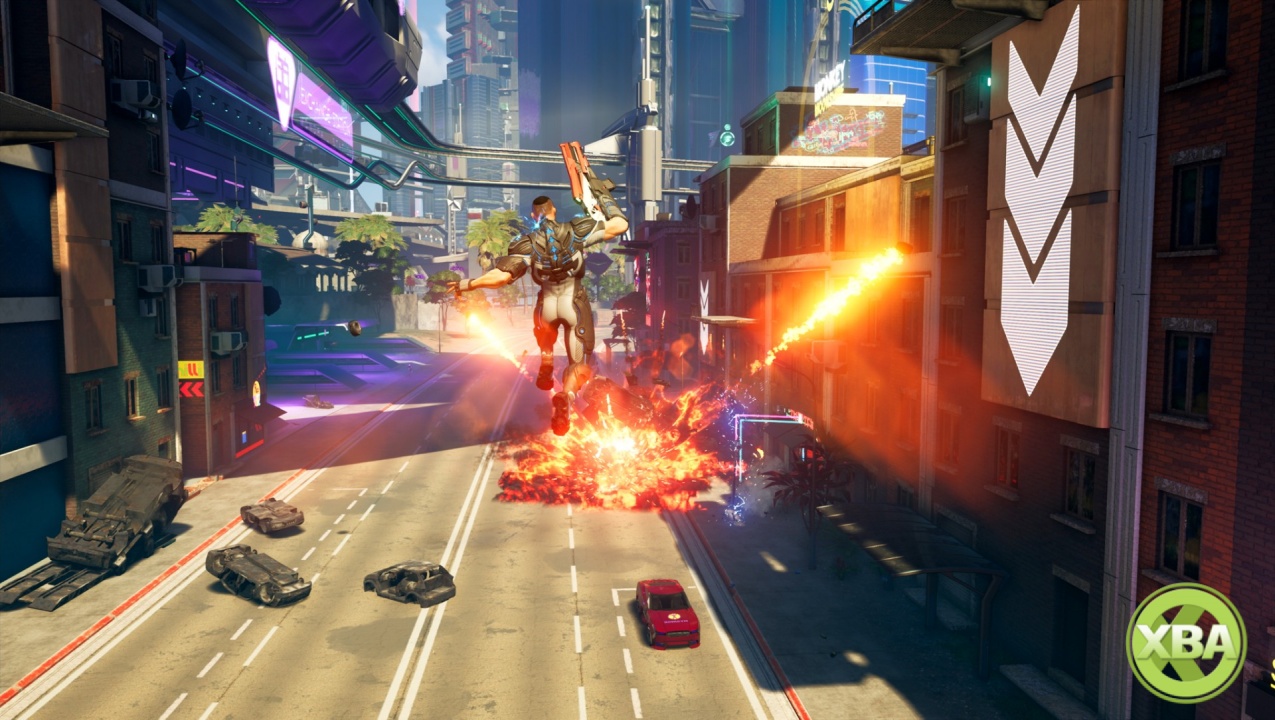 New weapons are unlocked just as quickly as your abilities.  This helps to ensure that the action stays fresh and fun, even after destroying a samey looking location over and over again. There is a decent variety of weapons and the guns are enjoyable to use. You have your basics like shotguns and assault rifles but eventually, you’ll graduate on to full-on automatic missile launcher and a mega rifle that shoots out black holes, consuming enemies and environment alike. These more advanced armaments can help you rain absolute chaos on the city, resulting in the complete annihilation of every onscreen enemy and a power trip unlike anything I have experienced in a long time.  While the missions are repetitive, I couldn’t help but be thrilled the entire time.

Hopping from rooftop to rooftop, Crackdown 3′ epic sense of scale becomes apparent. Surrounding buildings and strongholds are huge and offer a tremendous amount of breathing room for jumping and flying through enemies, destroying them however you see fit.  The extraordinary scale is never more apparent than when scaling a boss’s tower. These towers are massive upward gauntlets that put platforming abilities to the test. They are exhilarating, to say the least, and are truly a shining aspect of the game. It is a shame that the boss waiting at the top is never more than a person in a mech but even still, they often reward you with a cool new weapon to use. Unfortunately, there are only a handful of these massive towers to conquer and the lesser bosses are nothing more than slightly tougher versions of their minions, with battles simply taking place in one of their outposts.

The length of the campaign will be an issue for many, as the whole Terra Nova Corporation can be decimated in little under 7 hours. As an adult gamer, this is music to my ears (I just don’t have the time to sink hundreds of hours into a game due to my hectic schedule and busy family life) but this will not be enough for many gamers.  It is baffling that the 5-year development was not enough time to deliver a longer and stronger story.

To pad things out, there are races to take part in and agent DNA to collect.  The races I participated in were just simple time trials, which left me wishing for something more substantial given the massive playground at the developer’s disposal.  Likewise, collecting agent DNA feels pointless, as collecting the DNA gives additional agents to play as with very minor differences between them.

When you do finish the 7-hour story and have tried the races and collected your fill of agent DNA, you can jump into the multiplayer Wrecking Zone mode.  Unfortunately, well… it sucks.

I am not a big multiplayer player, but it is painstakingly apparent that Wrecking Zone is no more than a shell of what was promised. Cloud-based destruction was one of the key selling points in the early marketing for Crackdown 3 and to see it boiled down to simply creating holes in empty virtual buildings for you to shoot through is a shame. These matches don’t even take place in the main open world, but a separate virtual reality looking mishmash of empty, floating, squares and rectangles that seem like simple representations of buildings. Even as the walls of the rectangles crumble, it feels as satisfying as stabbing a pencil through a wet piece of paper.

There are two multiplayer modes; Territories and Agent Hunter. Territories is a bare-bones King of the Hill-style affair and Agent Hunter is similar to Call of Duty’s Kill Confirm.  If you are looking for a game to steer the conversation away from Apex Legends or Fortnite, Crackdown 3: Wrecking Zone is not it. Fortunately, the campaign can be played co-op so there’s that. 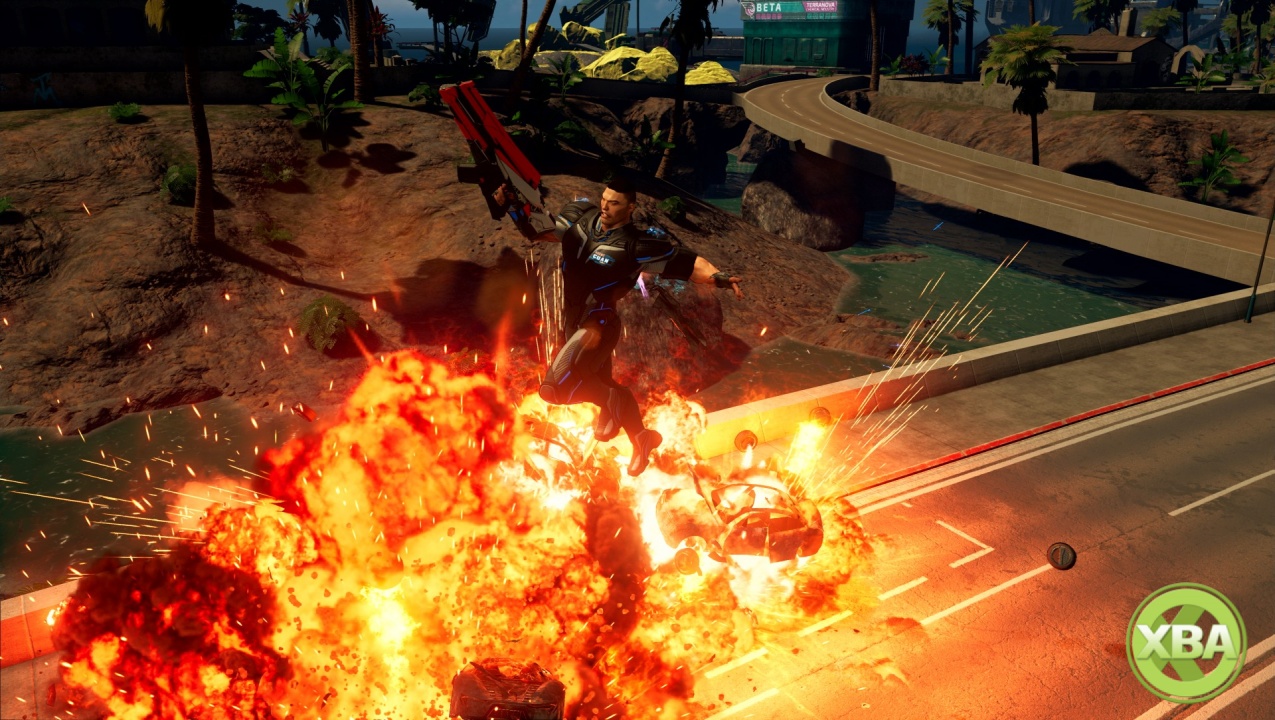 Despite Crackdown 3’s shortcomings, it is still an adrenaline-fueled blast to play through. The campaign is void of any narrative structure and is pretty repetitive, but the chaotic, over the top moment-to-moment action keeps things consistently fun.  Upgrading your agent and unlocking new weapons means that the carnage only escalates as the game progresses.  The multiplayer, on the other hand, should be avoided.

As a $60 game, I would recommend waiting for Crackdown 3 to reach the bargain bin, mostly due to its extremely short play time.  However, as a game that can be downloaded with a Xbox Game Pass subscription, there is no reason not to give it a try if you already subscribe to the service.