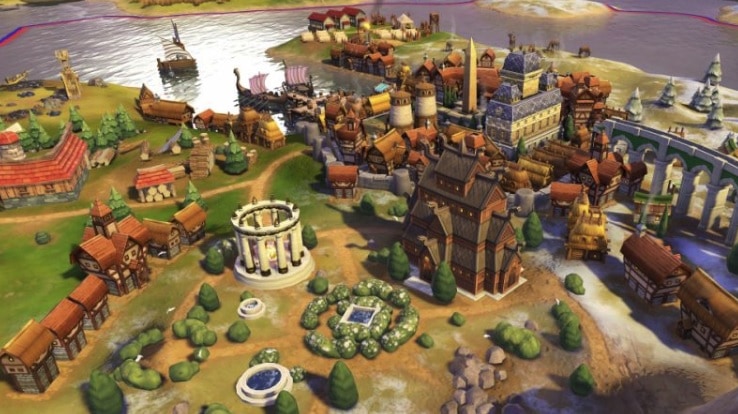 Civilization 6 review in 500 words or less, for those with jobs, families, and responsibilities. Review by John Santina.

(If you have a little more time, you can read a longer review by Andrea Ritsu here. This is John Santina’s take on the latest release in the Civilization franchise.)

My tank unit delivers one last explosive barrage to finally bring London to its knees. Queen Victoria’s century-old pleas for friendship have long since been forgotten. I, Julius Santinius, Emperor of Rome, have secured a Domination victory.

I have loved Civilization ever since I inherited a scratched Civ 1 MS-DOS CD-ROM with over 20 years ago.  The basic graphics disguised a deep and immersive tactical experience that I still return to today.  Civilization 6 is the latest in the series, benefiting from two decades of enhancements and refinements, undeniably making it the best yet.

Civilization’s concept is simple: take a nomadic tribe and create a legacy that stands the test of time. While the raw ingredients remain the same, Civ 6 introduces smart and bold improvements that enhance the experience substantially.

Civilization 6 follows the immensely popular Civ 5, a critically successful title with various expansions that further added to the stellar base game.  Civ 6 currently has less content, but with time will no doubt have expansions to expand and enhance the experience.  Despite this, the standard version of Civ 6 is one of the most feature rich Civilization games ever released, with months of content and experimenting to enjoy.

Civ 6 is a visually stunning game, both from a distance and zoomed in. The landscape, buildings and units are detailed and charming, while the civilization Leaders avatars are instantly recognisable, bringing the famous historical figures to life.

Audibly, the epic orchestral soundtracks soothes during the quieter moments, such as when adding buildings or changing tax rates, and gets the adrenaline flowing when going to war with your sworn enemies. Sean Bean’s narration is expertly delivered and adds to the high audio standards across the board.

Diplomacy is wonderfully deep; there is always the opportunity to mend broken alliances over time. That is, if you decide not to just decimate your enemies (my preferred approach).

Victory doesn’t have to be achieved with an aggressive Domination victory; your legacy can be secured via a Culture, Religious, Science, Time or Score victory.  Waging war has never been more tactical and rewarding, but the additional victory options provide further depth and additional replayability.  Part of the joy of playing is experimenting with trial and error, edging closer to realising your vision with each play-through.  There will be many failed attempts, but with each crushing defeat comes a new insight that will lead you every further on your journey towards victory.

As an adult gamer, I love that Civilization can be played on the couch while spending time with family, without affecting the game experience.  The turn-based gameplay facilitates jumping in and out of the action without losing immersion, much like a game of chess – though you’ll need the inner strength of a God to stick to the “just 5 minutes” you promised yourself when you loaded it up.

BUY/WAIT/AVOID?
It’s impossible not to recommend Civilization 6; the depth in gameplay and the quality of the new additions is worth the price of admission alone.  Taking a civilization from nomadic tribe to World Super Power never gets old, and the variety of options to win provide a huge amount of replayability and value.
Verdict: BUY