BY DEATHTECH: Circle Empires is a lightweight strategy game, that is singleplayer only where you start off with one circle and a few base units and try to beat the game according to one of three game modes; Kill the target, Conquer the map, defeat the A.I. empires.

So let’s get stuck in!

To start off we will go ahead and talk about the basic mechanics.  The map is split up in the titular “Circle” pieces of land. They are connected to each other via landbridges however these are not always present so something you may have to go the long road around to get where you want to be.

Each circle can have a different type, the types I have seen before are:

And for every cardinal direction, a circle can have a single wall {upgradable}, circles can also have one bank {generates gold over time}. 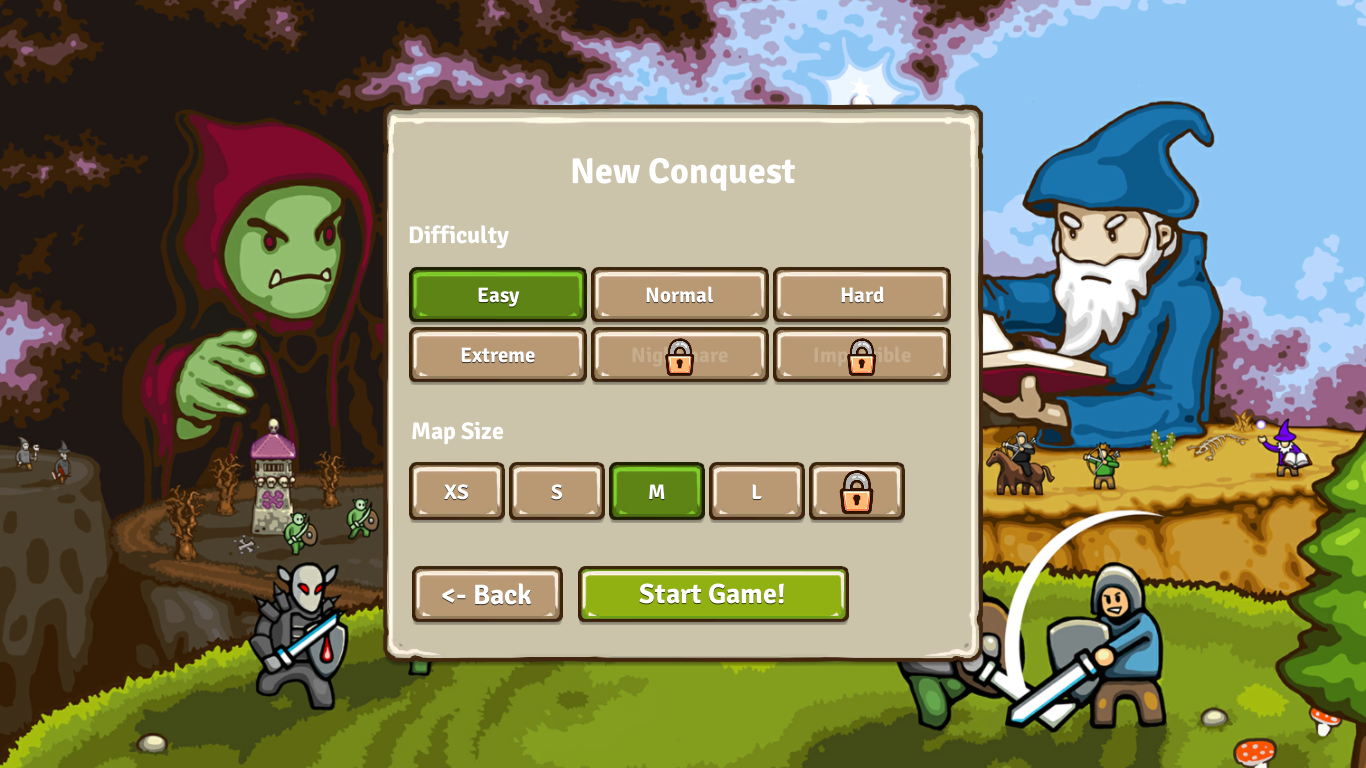 A circle gets conquered when only your forces remain in the circle. Hostile buildings also have to be destroyed.

The quantity of circles/map size is dependant on what the player chooses when starting a match.
There are 5 map sizes available; XS (4 circles), S (9 circles), M (16 circles), L(25 circles) and XL (49 circles).

The game also has leaders you can pick and they will provide the player’s empire with specific bonuses. So let’s go over the leaders and their provided bonuses:

The Units (Only default)

The units in the game are pretty predictable however more units can be hired from the merc camps or obtained through other means. 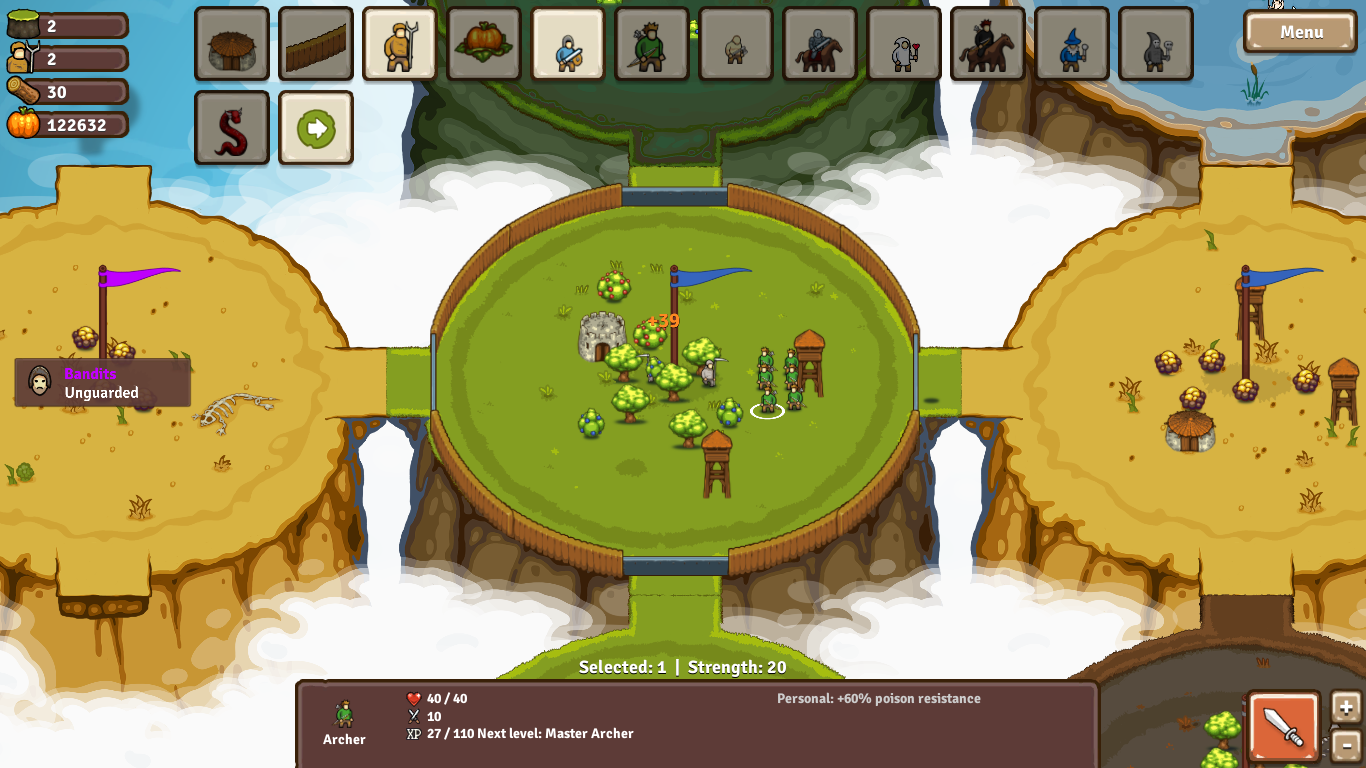 Although the game definitely favours the use of ranged units over melee, however, there was recently an update to rebalance some units so it may be a bit better now.

The Buildings (Only default)

The buildings in Circle Empires are rather very simple and straightforward for their functions.
Keep in mind that elemental towers do less base damage than the basic tower. 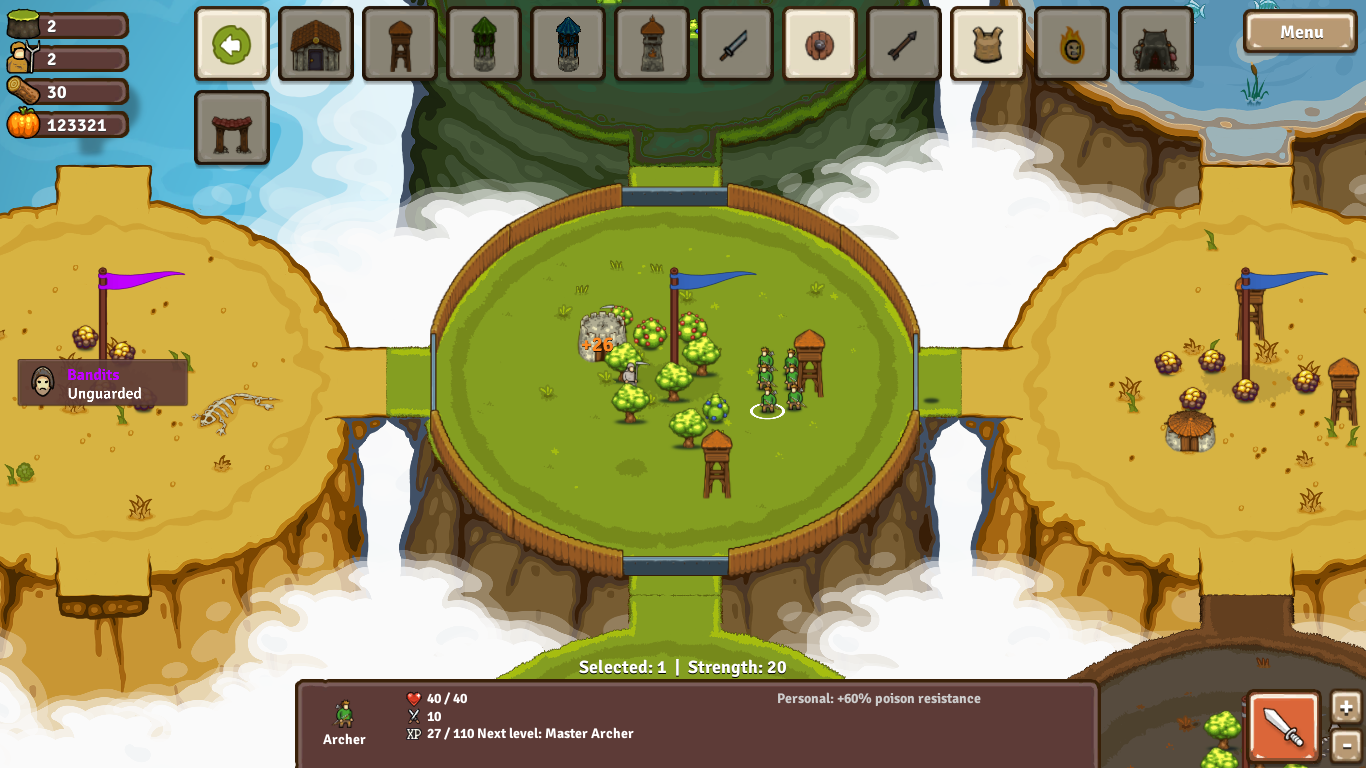 To start off a match will last longer depending on the game type, difficulty and map size.
But in most cases, your games would end up lasting between 15 – 30 minutes longer maybe depending on playstyle.

There are a few quality of life things that sadly just aren’t available in the game and a few recently added.

Originally there was no way to “attack move” which meant you would initiate an attack by sending some units in, usually to their deaths to trigger combat. However the recent updated added attack move. 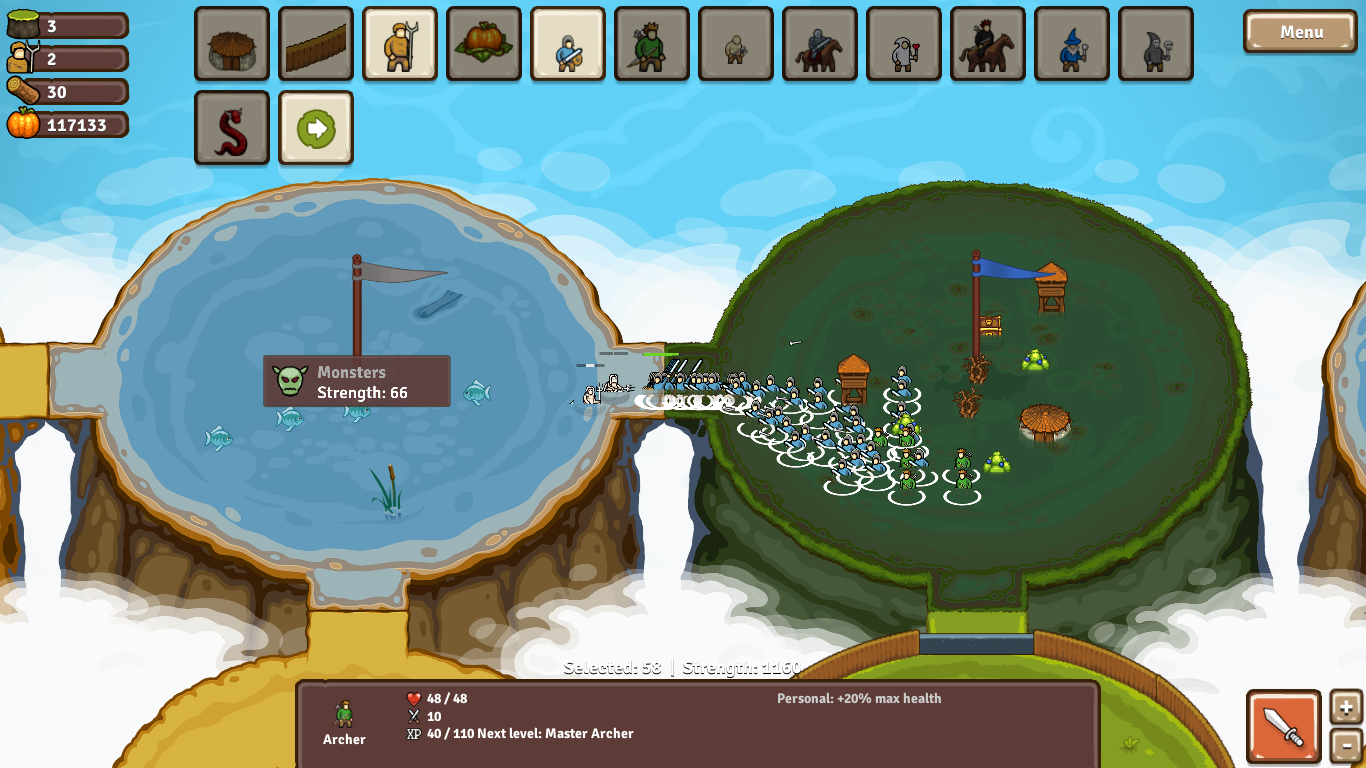 Ranged units don’t automatically go into combat mode when you ask them to attack a unit in the enemy circle, this gets really annoying with large armies as you have to click them one at a time.
Well, at least until they reach your wall or circle then the auto attack happens as your circle is “under attack”. This behaviour is annoying as valuable time is lost when having to manually select targets.

An area’s respawning resources can annoyingly become mined out causing those workers to be wasted and the circle to become pretty much useless other than a defensive position which you rarely need.

However, on some positive notes. Units can be levelled up and thus be more resilient.
Upgrades can be done repeatedly to give you an edge if you can foot the bill.
No unit caps throughout the games, I’ve personally had armies so large they couldn’t fit in a single circle. This can make for some really epic battles. 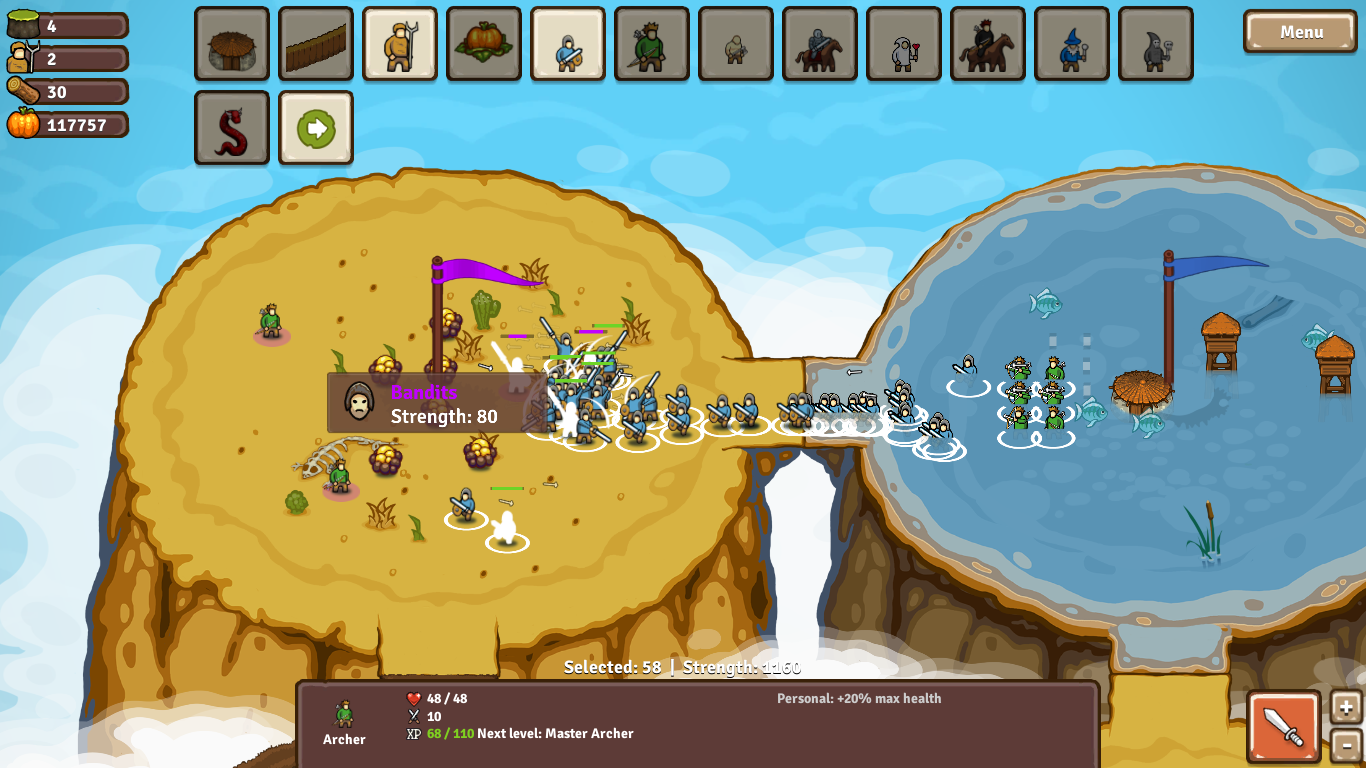 On higher difficulties, enemies can respawn, attack each other, attack you and empires will try to conquer other circles. This can make for a really fun experience.

The game also sports fog of war so exploration has to be done cautiously.

To me, the game felt pretty well balanced and fun, however, the game does get very hard on higher difficulties as enemies spawn with loads of forces when you are just starting out.

Circle Empires is a great way to enjoy yourself if you are at any time wanting to play a quick strategy game without having to dedicate 1 – 2 hours it normally takes to play a match.

The game has a plethora of different ways to play through and with so many possible different maps you could play many games before getting bored.

The music in the game is pretty nice too as it really gets you into that Warcraft 3 vibe.

The graphics are pretty nice, sure they aren’t hyper-realistic but that is not what they went for.
They chose to go for nice smooth artsy drawings that look pretty nice and the effort that went into them really shows.

The Strategies you can use are pretty similar to other games and equally useful so pretty much any strategy game fan can just pop right in and feel like they have played for years.

The game is very fun to play either way if you enjoy strategy games.

I would recommend the game, it’s only sad there is no multiplayer.
Either way, if you purchase the game it will definitely keep you occupied for a long time.