Celeste is one of those rare works that has a singularity of focus that runs through its every facet. Story, character, game play, music, style and all other aspects circle around the same theme and each element is elevated by the presence and focus of the other. Ultimately, this strong story and rock-hard game play add up to not only what was one of the best indie games of 2018 but quite simply one of the best gaming experiences in recent years.

At its heart, Celeste is a game about overcoming obstacles. You play as Madeline, a young woman who is aiming to climb Celeste mountain. The metaphor, admittedly, is not very subtle but it is beautifully told as each level and character adds their own take on this theme.

As well as conquering the mountain, Madeline also must tackle her inner self-doubt at various points throughout her climb – the voice inside her head telling her what she can’t do is just as dangerous as any ledge or spike she may encounter. While again not wholly subtle, Madeline’s relationship with her own anxieties is intricately and devastatingly portrayed throughout the entire length of the 15 hours or so story. Madeline’s situation, to most, will be wholly relatable and it is refreshing to have a game that confronts these themes openly and honestly without pulling any punches. The different stages of the mountain and other characters she encounters add further layers to this motif – a highlight being the Instagram fiend Theo who gets trapped in a mirror world of his own creation. 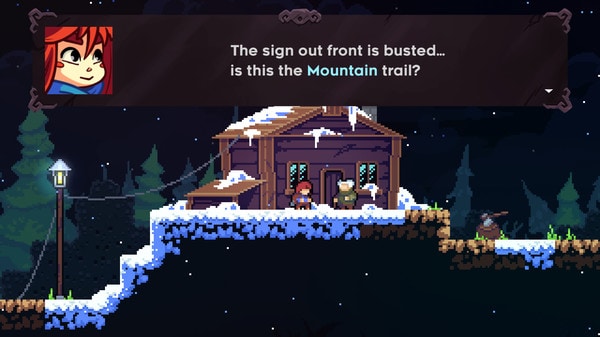 As an antidote to this, Celeste is a game that is very much on your side. It wants you to succeed and provides encouragement as regularly as it does platforming sections that require pixel-perfect timing. The levels are incredibly hard, some of the toughest platforming I have ever played, but they never feel unfair and you are constantly provided with encouragement to go back. One nice touch is the “death counter” – you will fail hundreds, if not thousands, of times and each one is recorded at the end of the level. However, Celeste takes pains to remind you to be proud of this counter. Do not treat it as how many times you have failed, it notes, but simply how many times you picked yourself up and gave it another crack. Other games defined by their difficulty often feel like they are out to get you, they are something to be conquered, but Celeste very much makes itself feel like it is willing you to succeed at every opportunity.

The game is set up across multiple stages up a mountain, but in fact it is played out over hundreds of mini-screens that make up these stages. Each time you die you go back to the beginning of the screen, meaning you never lose much progress and you re-appear within seconds. Each of these screens is a mini platforming puzzle or challenge, and the loop of attempt, failure, success is an addicting one that is repeated throughout. If anything, each screen provides a microcosm of the game itself – presenting you with a tough challenge, giving you the tools to succeed and ultimately a reward of progression as you do so. I am not ashamed to admit that I was on some screens for nearly an hour, but the longer I failed the more satisfying it was when I ultimately triumphed. 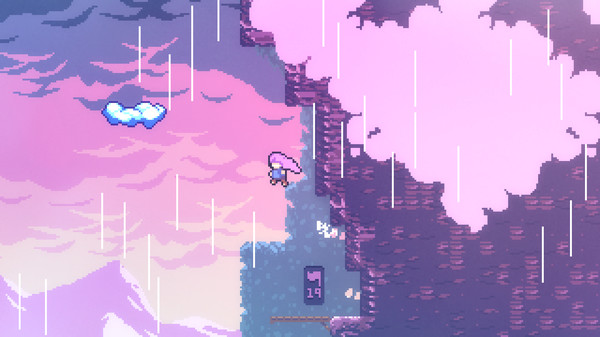 Celeste is very much defined by its difficulty. While each level is difficult, the player has options to make it both easier or harder for themselves as they want. If you just want to experience the story an assist mode makes it possible to be invincible and breeze through the adventure. Equally if you want a more difficult challenge optional strawberries (providing no in-game benefit) are there to find and collect. Difficulty, and over-coming that difficulty, is an important theme but so is acceptance and the developers clearly did not want to exclude anyone from this adventure.

None of this would mean much, however, if the game itself was not an enjoyable or well executed experience. Luckily, Celeste holds some of the most satisfying 2D platforming experiences available. You have three basic abilities – jump, a mid-air dash and climb. Each level is built around this, sometimes with an added twist, and the controls are pitch perfect – none of my multiple-thousand deaths felt unfair. Each world offers a different “hook” which changes gameplay enough just to make it interesting but generally things are kept very simple and the experience is more rewarding for it. 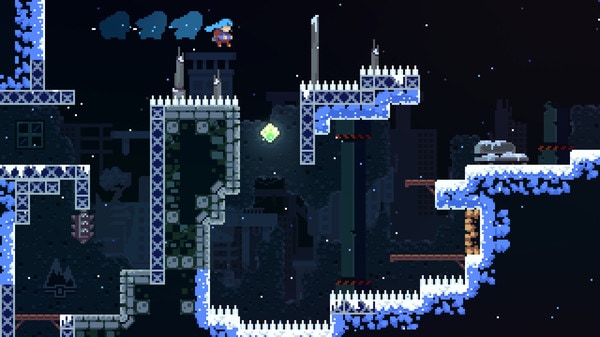 There is also plenty of content here, depending on skill you could complete the main quest in 10-15 hours but added B and C sides of the stages provide a much tougher challenge which can double or triple this playtime. Add to this the mission of locating and collecting all the strawberries and you certainly get value for money here.

Celeste is also stunning to look at and listen to. Madeline’s movement and the changing scenes of each stage keep things fresh and provide a real sense of awe as you scale Celeste mountain.

Musically, each level has an unbelievable catchy soundtrack, to go with the addictive gameplay loop, that you will find yourself humming long after finishing your adventure. Additionally, each B-Side presents a remixed version of the original music by a separate composer, fitting in perfectly with the remixed nature of the level itself. In fact, the music may be the high point in a game of high points, each tune and soundtrack seemingly fitting in perfectly with the surrounding action. 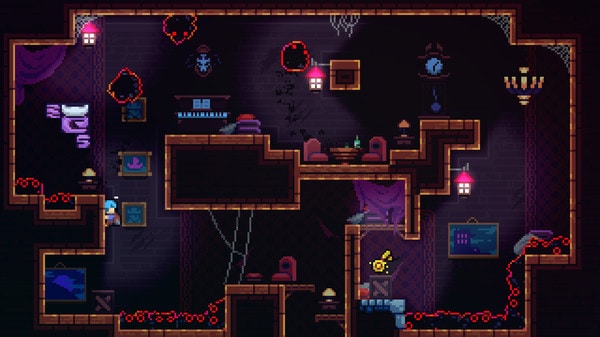 Celeste is a testament to the healthy state of indie games right now.  The fact that it was considered for Game of the Year Awards in a year that brought us God of War and Red Dead Redemption 2 tells you all that you need to know.

In Celeste, the tiny team at Matt Makes Games (now rebranded as ‘Extremely OK Games’) in Vancouver has made one of the gaming experiences of the generation. With an important theme, addictive game-play loop, joyous platforming and an adventure that is both a joy to look at and listen to, Celeste stands toe-to-toe with multi-million budgeted AAA titles.

If this isn’t a must buy, I don’t know what is.