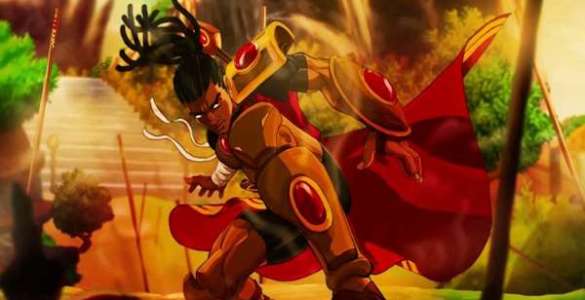 Aurion: Legacy of the Kori-Odan is a gorgeous action RPG, which harnesses mechanics perfected in classic retro games to share African culture with the world.

It isn’t perfect, but it is different.

Thank you, Kiro’o Games, for providing a copy of Aurion: Legacy of the Kori-Odan for us to review. This review shall remain honest and unbiased.

I remember reading about Aurion back when Cameroonian developer Kiro’o Games was trying to secure funding to complete the game. The premise sounded interesting and the screenshots were beautiful, but with the constant barrage of video games being featured every single day, it slipped from my consciousness.

Fast forward to early December and I found myself with a copy of a game to review that I thought I had never heard of. The title sounded long and confusing, but the moment I loaded it up and saw the title screen the penny dropped.  “I can’t believe I forgot about this game,” I thought to myself.

And so the adventure began.

Aurion is set on the planet of Auriona and tells the story of Enzo Kori-Odan, the prince of the fictional land of Zama. The story begins on the day of Enzo’s joint coronation as King and his wedding to Erine Evou of Soma, a day that was supposed to be perfect but ends with Enzo being attacked, overthrown and exiled in a coup led by his brother-in-law. And you thought you had family politics?

Enzo and Erine embark on an adventure to far African kingdoms to seek alliances to defeat Erine’s brother and to regain their rightful place on the throne.  The adventure introduces many aspects of African culture and mythology that the Western world may not have been exposed to, weaving a tale of wonder with heritage and ancient history.

The world is hand drawn and so strikingly beautiful that I couldn’t help but stop and take in the intricate details hidden in each environment. Extravagant palaces, claustrophobic caves and luscious countryside are just a few of the locales that you will traverse on Enzo’s journey of self-discovery and self-development.

Aurion’s gameplay pays homage to many classic games of the 16-bit era. The RPG elements could have been lifted from Final Fantasy VI, the combat from a love-child of Street Fighter and Streets of Rage, and the exploration of more contemporary games. The infusion of the various styles provides Aurion with a level of depth that requires dedication to master.

Despite this depth, the RPG elements do not feel as important as they do in true RPG games such as Final Fantasy and Chrono Trigger and exist primarily to facilitate the arcade-style combat mechanics.  Fortunately, fighting feels rewarding and rarely degenerates into button mashing, with initial fights featuring simple button combinations which gradually develop into complex battles against enemies that increase in numbers and strength.

Enzo combines combat with Aurions: powerful abilities that can defeat swathes of enemies in the blink of an eye.  Despite the depth provided by the combination of these Aurions and the dozens of combo moves, I couldn’t shake the feeling that the experience wouldn’t have been substantially affected had the RPG elements been removed entirely.

The music is a particular highlight, featuring African drums and tribal chants blended with synthesisers and percussion. The resulting concoction is unique and stays true to African culture.  The voice acting is decent, and the sound effects make fighting all the more satisfying.

Aurion isn’t perfect by any means. The story follows a linear path, typically going from point A to B to talk to X or Y.  Lore and history are typically delivered in long conversations, peppered with new terminology that can be difficult to remember. Many NPC characters feel uninteresting and do not add to the adventure, existing solely to deliver a few lines of text and to fill a portion of the screen.

Fortunately, the premise and generations of history add so much to the journey that they cast the negative points aside.  Key characters are interesting and unique, and each hand-drawn location is more beautiful than the last.  The story remains interesting throughout and is vastly different from the standard JRPG offerings which have become commonplace.

Kiro’o Games had the difficult task of introducing African culture and mythology to the Western world while delivering a compelling journey across several memorable locations.  The team of self-taught video game developers have delivered a solid experience that is well worth your time – particularly as it only costs £11 at full price.