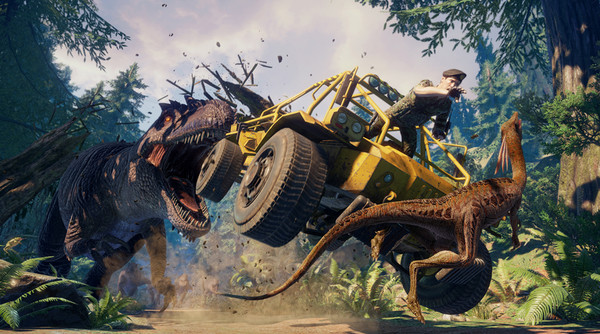 Ark Park brings dinosaurs to VR with a level of polish not seen in other titles.  Putting on my VR headset felt like stepping back in time to a prehistoric world – at least for a while.  In my mind, it is the best dinosaur experience available on VR to date – but that doesn’t mean that it is perfect.

Ark Park can be experienced both solo and in co-op with other players.  I played by myself primarily but feel that playing in co-op would add some more fun to the experience.

There are two movement systems available; teleport or the sliding motion present in most other VR games.  There is also a free DLC mode where you ride on the back of a pterodactyl, guiding it through the air by looking in the direction that you want to go.  Each of these control methods are no worse than most other VR titles.

The opening of the game is reminiscent of Jurassic Park.  Players are introduced to the world with a guided tour of the facilities and gameplay mechanics.  Despite being lengthy, the opening doesn’t outstay its welcome and would make a great VR experience on its own if priced right.

Unfortunately, things don’t improve after this point, as players are thrown into what is essentially the hub of the game from a gameplay perspective – a wave shooter.  Players must defend a mind control tower from an onslaught of dinosaurs that run down paths towards their target.  You essentially shoot them dead, face a boss (huge scorpions and spiders anyone?) then move on.  Your first wave will have you in awe as they charge towards you, but after an hour or so, they quickly lose their impact.  There just isn’t the threat to feel like an authentic dangerous battle against prehistoric beasts.

Away from the wave shooting portion, players have the option to “explore” and harvest items.  There isn’t a huge open world to explore and get lost in for days at a time, but this portion of the game is at least designed to give players something to work towards as they use the items they have harvested to create more powerful weapons for future wave shooting sections.

Visually, Ark Park is very good (particularly if you’re willing to mess with a few .ini files) and there is genuinely no better VR game on the market today that can capture the feeling of being in a world with dinosaurs.  The landscapes feel lush and there are moments when you will feel like you are really standing in this prehistoric world with only a few handguns to keep you company.

Ark Park is undoubtedly the best dinosaur VR experience currently on the market – but is it worth $40?  That honestly depends how much you love dinosaurs.

From an experience point of view and also from an educational perspective, there is a lot to love about Ark Park.  The dinosaurs are awe-inspiring and incredibly well-realised and the world feels like it could really exist on an undiscovered island somewhere.  Unfortunately, the repetitive and generally flat wave shooting sections feel uninspired and begin to outstay their welcome after just a few hours.

I personally feel that you absolutely should add Ark Park to your collection, even if just to walk with dinosaurs for a few hours, but would recommend waiting for a sale.  With so many quality VR experiences on the market, the $40 price tag just doesn’t justify the gameplay on offer.