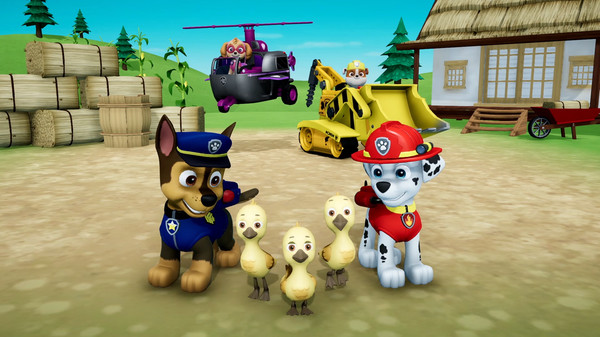 This is undoubtedly an article for the parent gamers out there.  My three-year-old daughter absolutely loves Paw Patrol and I expect my seven-month-old to follow suit in the coming years.  When I saw Paw Patrol: On A Roll pop up on Steam I was intrigued.

I’m a PC gamer first and foremost and do occasionally let my daughter play games like Overcooked with me (trying to score even one star is like playing on a Dark Souls level of difficulty).  Finding other games to play can be a challenge and is one of the reasons I’ve strongly considered getting a Nintendo Switch as time goes on.  Paw Patrol: On A Roll could be worth checking out, I thought.

I clicked on the Paw Patrol: On A Roll Steam page and the video made the game look simple but pretty decent.  I’ve seen far worse.  Then I saw the price.

It might make me either a bad father or a cheap-skate (or both, if you’re feeling particularly harsh), but £25 is far too much to pay for a kids game.  This especially becomes evident when you compare it with AAA video games that are less than a year old being offered in sales for a similar price.  It just doesn’t make sense.

My daughter has a subscription to Fire for Kids Unlimited on her Kindle, where for a few pounds a month she has access to as many of the provided games, TV shows and books as she can get her sticky fingers on.  Dropping what equates to almost a year’s access to the Amazon subscription service is just ridiculous for 16 levels of platforming action.

I know it’s harsh.  Paw Patrol: On A Roll might be decent.  It’s just too expensive for me to check out or recommend right now.

Where do you stand on this?  How much would you pay for a video game for your kids (bearing in mind the ages we’re talking about here)?  And, do you even let your kids play video games?  Leave a comment below.