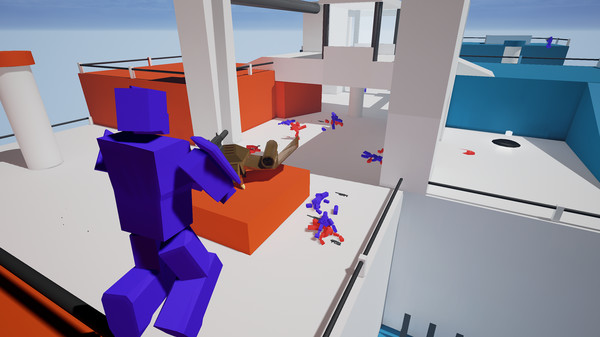 HitBox is a fast-paced and competitive multiplayer shooter, with a stylish, minimalist style to set it apart from the competition.

But, is it any good?

Here’s the thing; I enjoy online shooters, but I’m not a fanatic.  I play a lot of Planetside 2 and have been known to hold my own in Call of Duty, Battlefield and a handful of others, but I don’t tend to get caught up in competitive shooters. I’m not the target market for HitBox.

With that said, I really did enjoy my time with HitBox.

The colorful art style and frantic gameplay set it apart from the realistic modern and futuristic shooters dominating the market.  Shooting an enemy in the face and watching him explode into a pile of pixels feels intensely gratifying, and the blissfully fast-paced action means you will barely have a moment to catch your breath.

I played against bots for my hour with HitBox but found them to be a real challenge, punishing every error I made.  If player versus player is anything like the bot battles I have experienced, HitBox is going to be a hit with competitive gamers.

The addition of split-screen is a nice touch, a feature often overlooked by AAA developers.  The style of gameplay could provide the key to unlocking the return of nostalgic couch battles not experienced by adult gamers since the days of Goldeneye and, well…Goldeneye.

The maps are the real star of the show in HitBox; they are as minimalist as the characters and are filled with unique platforming variations of the standard FPS formula.  There are narrow corridors aplenty, but in between these you will be flung across the small maps by catapults, dragged down into spiked grinders and shoved off of ledges by sliding blocks.

Whether you choose to support HitBox through Early Access really depends on the kind of gamer you are.  Players who don’t enjoy FPS titles are unlikely to find anything to change their mind in Wormhole Entertainment and Peripheral Labs effort.  On the other hand, fans of competitive online shooters looking for a little something difference may just find that unique experience they are looking for.