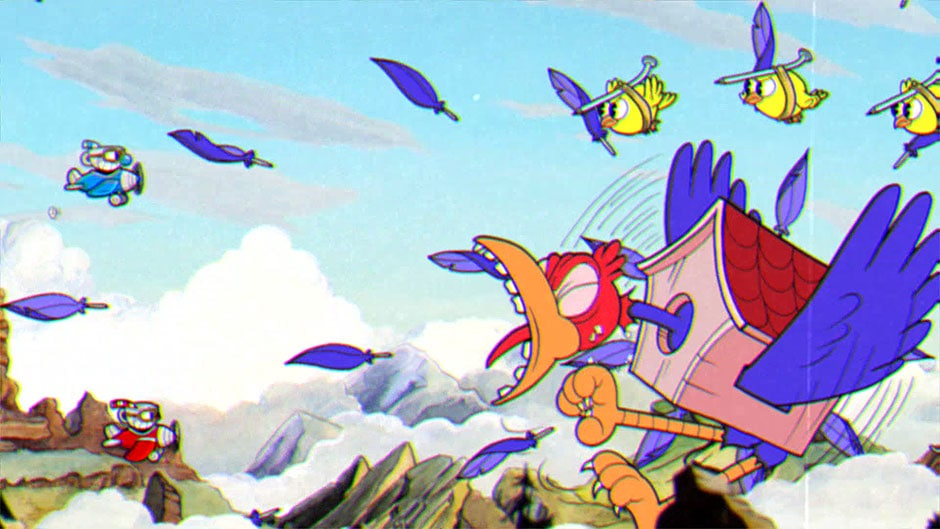 Cuphead is renown for its striking visuals ripped from the 1930’s.  Hidden within lies a challenging run-and-gun platformer not content with just winning awards for its unique style.

The incredible animation has stolen many hearts, and the whimsical boss battles have left many mouths agape over the years.  Developer Studio MDHR threw further fuel on the fire by revealing retro-style platforming stages, showing that Cuphead is much more than a pretty face.

Cuphead is a game that you wish you could put the controller down and marvel at for some time, but while the stage starts out slowly with only a few enemies to fight, the screen quickly fills with hostile fauna to intensify the action.

Couch gamers are always crying out for more local-coop options to play with friends and loved ones.  Cuphead could be the game of choice for some time to come – especially because the hand-drawn characters draw in gamers and non-gamers alike.

Players will need to keep their wits about them, though.  Cuphead and Mugman have 3 hit points apiece and each early stage enemy can inflict 1 hit point of damage at a time, which can rapidly deplete health.  The good news is when one of the two players fall they can steal a hit point from their friend – there is nothing more frustrating than having to watch someone else play for 15 minutes because you died early on.

Away from the visuals, the retro influences fueling Cuphead ooze out of every moment.  The run-and-gun action and truly gigantic boss battles resemble classics such as Contra, while the platforming elements carry more than a hint of Mega Man.

The influences from games of yesteryear also bring along their difficulty levels, as the more a level fills with enemies the harder it becomes.  Expect many controllers to be thrown soon after release.

We keep coming back to it, but it’s hard to avoid; the most striking thing about Cuphead is clearly its graphical aesthetic.  Each stage feels like picking up and playing a classic cartoon from the pre-World War II era.  The sound design is also exemplary and gives a nod to the classic cartoons of the era, with the sound of Cuphead and Mugman shooting their guns having been recorded from voice rather than any mechanical method.

Every element of Cuphead, from the gameplay to the graphics and sound, is deeply rooted in nostalgia, seemingly on a mission to bring the best of what made retrogames great to the forefront once again.

The world has waited long enough for this indie wonder, and it is hard to imagine Cuphead being anything but a resounding success on release this summer.