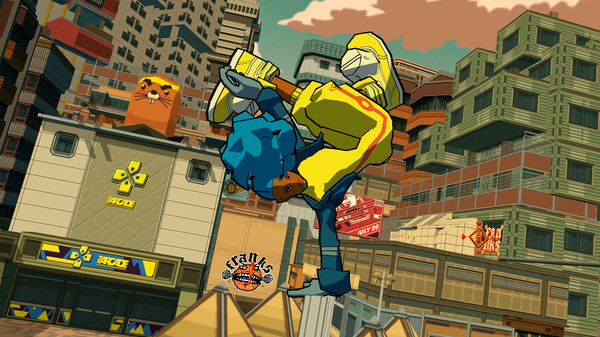 BY LUKE MARSHALL: Indie developers Team Reptile have just announced a new game which appears to be a spiritual successor to cult-classic, Jet Set Radio.

Entitled Bomb Rush Cyberfunk, the game features a familiar cell shading art style and a return to the world of inner-city graffiti tagging.

It looks so familiar in fact that at first glance you’d believe this to be a fully authorised instalment to the popular series, however (believe it or not) this has nothing to do with the original or Sega.

Other than a short 14-second announcement video and a couple of screenshots, not much else is currently known about this new project. 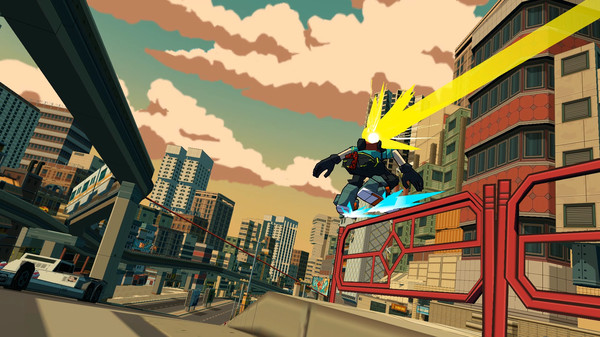 Yet here are the facts we do know, taken from the game’s description up on the Steam store.

“Team Reptile brings you Bomb Rush Cyberfunk, 1 second per second of highly advanced funkstyle. In a world from the mind of Dion Koster, where self-styled crews are equipped with personal boostpacks, new heights of graffiti are reached. Start your own cypher and dance, paint, trick, face off with the cops and stake your claim to the extrusions and cavities of a sprawling metropolis in an alternate future set to the musical brainwaves of Hideki Naganuma.

Facts:
– In the game you can choose a character from your crew and explore the three-dimensional streets freely.
– Each stage is a neighborhood that represents one time of day.
– You can grind, slide, jump, trick and airdash to move around
– The goal is to get your name up, your name up on the wall. Every stage has many spots to find where you can paint graffiti.
– You will encounter a lot of weirdos.”

Upon studying those screenshots it appears there’s one glaring difference that sets it apart from Jet Set Radio.  Whereas its predecessor was famous for its rollerblading, it appears Bomb Rush Cyberfunk has ditched the wheels, replacing them with…feet, apparently opting for a modern parkour approach. I’m not sure if this decision was to move with the times or to avoid a possible lawsuit, as almost every other aspect appears identical to Sega’s IP.

The original Jet Set Radio was released for the Sega Dreamcast way back in the year 2000, spawning one sequel, an HD remake and a dedicated fan base.

The aim of the game was to tag the city with your graffiti, whilst battling local gangs and law enforcement hot on your tail. It was incredibly unique, highly stylised and a hell of a lot of fun.

It was also one of the few titles where the soundtrack is equally as famous as the game itself. Information on this new game may be scarce, yet arguably the most exciting confirmation is that the original Jet Set Radio composer Hideki Naganuma is involved in this new project!

Unfortunately, we may be waiting a while, as it doesn’t look like Bomb Rush Cyberfunk will be with us until next year and has also yet to be confirmed for consoles; however, that’s surely just a matter of time.

I’ll definitely be keeping my eye on this one.