I just had to take time out of writing my next article to talk a little about something I am very excited about. It will be no surprise to anyone that I like a good retro system, it is after all why I still have so many computers, consoles and mini-systems I have owned since I started gaming in the 1970s.

*Pauses to blow the dust off*

I have however always wanted an actual arcade cabinet or at least a good alternative to one. So not long ago, when I received an Arcade1UP Street Fighter Arcade Cabinet, I thought my dream would finally come true – alas, not quite.

The Arcade1UP is a damn good stab at bringing our favourite arcade classics into our homes, the way they were meant to be played. There’s a lot to like about the various units they make, yet I still find it lacking a little – the emulation wasn’t as good as it could be, for my taste, so much so that I have replaced their emulator with a Raspberry Pi 4 setup.

Worse still were the controls, I know it’s intended to be a compact cabinet, but they are very cramped for two people and the quality, while improving in more recent models, is not the best you can get. I don’t want to waffle on about this cabinet too much, I’m more than happy to do a separate article/articles on the cabinet and/or the conversion, should anyone wish to read it.

There are of course many other options for getting a replica arcade into your home, not to mention buying actual arcade hardware, but your either going to be building those from scratch yourself in every way, dealing with the potential problems of an old arcade system, and/or paying quite a lot of money for a fully-built, pre-configured machine.

Step up to the plate AtGames.  No, don’t stop reading – seriously, it’s worth hearing me out on this one.

To some people, AtGames have a certain reputation for poor quality, cheaply made devices. I know this stigma exists and I’m not going to stick my head in the sand and pretend it doesn’t.

Personally, I’m rather fond of some of AtGames previous home mini-systems, I know they’ve had issues – some more than others. I think many of their previous systems have offered a good selection of games, on ok hardware, for a good price. They have served as excellent introductions to the retro games many of us love, for a younger generation. Or indeed, an older generation who can’t afford to (or don’t want to) collect a lot of old systems and games. Their Atari systems, in particular, are generally very good.

If you’ve ever actually stuck it out with them through any of their product lifespans, you get to see how passionate, dedicated and hard-working the team at AtGames are. They have in the past released many firmware updates to their systems, offering up more features, better emulation, and overall the best experience they can with what they have to work with.

Bear in mind, their systems generally cost a lot less than other mini-systems. Compare the ~£25 of the Atari Flashback Handheld (which also includes a screen) to the £100 I’m paying for the PC Engine Mini or even the £60 of the Mega Drive Mini.

All I’m saying is AtGames work to a certain budget to appeal to a mass-market, not just the hardcore among us.

You’re Going To Be Really Surprised!

Whatever your opinion of AtGames, I have a pretty good feeling that they’re going to redeem themselves to you when you see what they achieve once that smaller budget has been thrown out the window, such as with their upcoming Legends Ultimate Home Arcade. 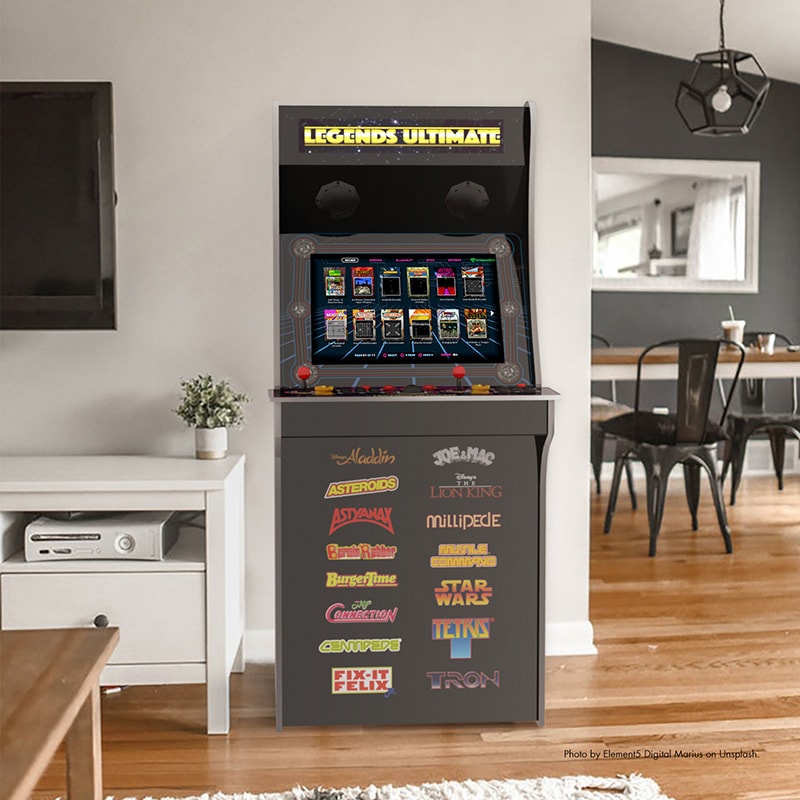 Where other home arcade units are either great, but seriously expensive, decent – but limited, or just downright lacklustre. AtGames has put together what, on paper – and from what I’ve heard, certainly sounds like a unit which should be the *ahem* ultimate sub-$1500 home arcade system, priced at around $600 (I’m excitedly awaiting UK/EU pricing). But, from what I know about this machine it blasts others I’ve used, costing upwards of £1,500, way out of the park.

First of all, this is a proper, full-size unit with a low latency, high definition 24.5” LCD, the Control Panel has high-quality sticks, six high-quality buttons per player, two spinners with full 360-degree motion for those classic paddle games and a full-size trackball in the centre, all with button-mapping (natch). Along with the usual complement of selection and control buttons you’d expect. It’s already sounding pretty good to me, but it gets better. Coming with 350 arcade and console games built-in, spanning pretty much every genre you can imagine, you’re already off to a great start games-wise. But, just as they did by adding in the controls other companies don’t, AtGames have gone above and beyond to accommodate your gaming tastes.

The Legends Ultimate features two sets of HDMI and USB inputs, right there on the Control Panel, allowing you to connect up additional devices to take advantage of the HD display and high-quality controls built into the Legends Ultimate. That’s not something you see often, if at all, on other systems. You can also connect other Bluetooth or USB gamepads to accommodate playing modern PC games on the Legends Ultimate, or to add a couple of extra controllers for those three and four-player arcade games – Think Simpson’s and X-Men.

We’re not finished yet, not by a long-shot, while there are the 350 games already built-in, the chance of us all being happy with that selection is slim, to say the least – there’s always going to be games we wished were on there, but aren’t. That’s where ArcadeNet comes in, AtGames new subscription service which allows you to play even more arcade, console and PC games instantly, streaming them from the AtGames servers- We will have to see how latency figures into that. ArcadeNet, even the free version, also brings online competitive play and leaderboards. These may not be new features in gaming, indeed they are standard fare and have been for some time, but in a home arcade cabinet? I think this could be a first. Certainly, the Capcom Home Arcade has some online features, but it isn’t a fill arcade cabinet. 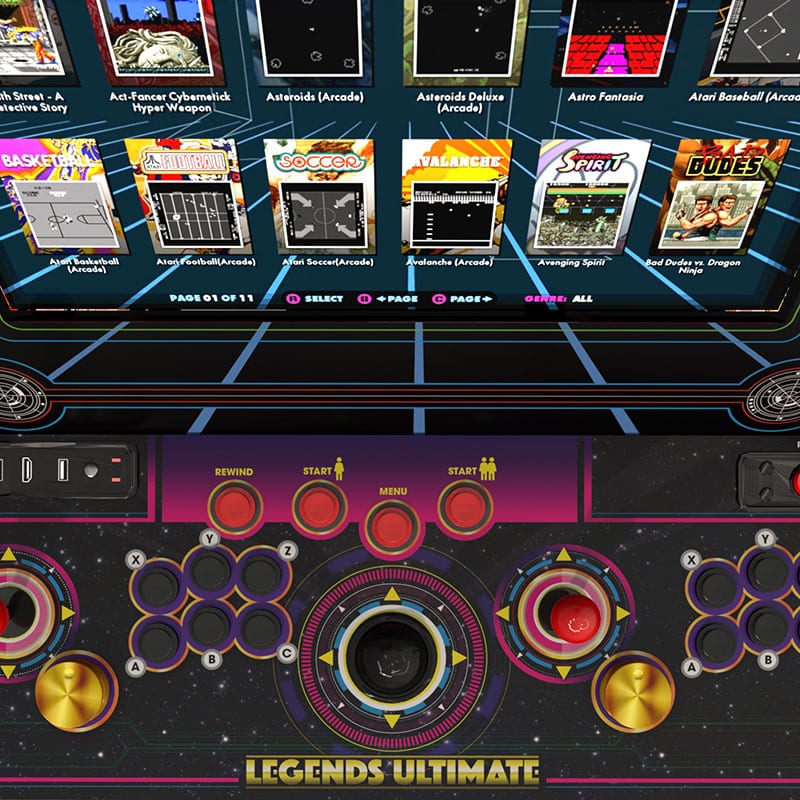 It gets better still, thanks to the built-in networking features of the Legends Ultimate, you can even stream from your home PC. All of your traditional services such as Steam, Origin, Epic and more cane used, again allowing you to take advantage of the control panel built into the Legends Ultimate or whichever control method you feel like for that matter.

To round off the huge list of ways you can play games on this stunning arcade cabinet, the one you’ve probably been waiting on me to mention most – yes, you can easily add more console or arcade games just by plugging in a USB drive.

I’m Giddy As A Schoolchild Getting, Well Whatever Fad It Is These Days

I know by now I probably sound like an AtGames shill – I’m not by any means, the AtGames products I own, I have bought myself, the good and the bad. What I am, is excited, very, very excited. I haven’t had my hands on one of these yet, I wish I had because there’s so much more I’d love to tell you, but until I have had the opportunity to give one a thorough going over, I’m not passing any judgements.

But I have heard from people, trustworthy people, who have had the pleasure of spending quite a bit of time with the Legends Ultimate and they have good things to say about it. The hardware is top-notch, the emulation wipes the floor with and laughs in the face of any AtGames have put out before. This is well designed for first-time users, taking less than 20 minutes to put the entire thing together but also, they’ve done a lot to appeal to the more hardcore among us who like to tinker.

With a whole host of good, high-quality components, standard connections and an absolute full to the brim feature-set, this is shaping up to be the single product which could well redeem AtGames in the eyes of retro gaming fans…… A statement I’m cautiously optimistic in making, hopefully, I’ll get to give you a definitive answer to that before long, I am saving up my pennies because I haven’t been this excited about a product launch in quite a while.