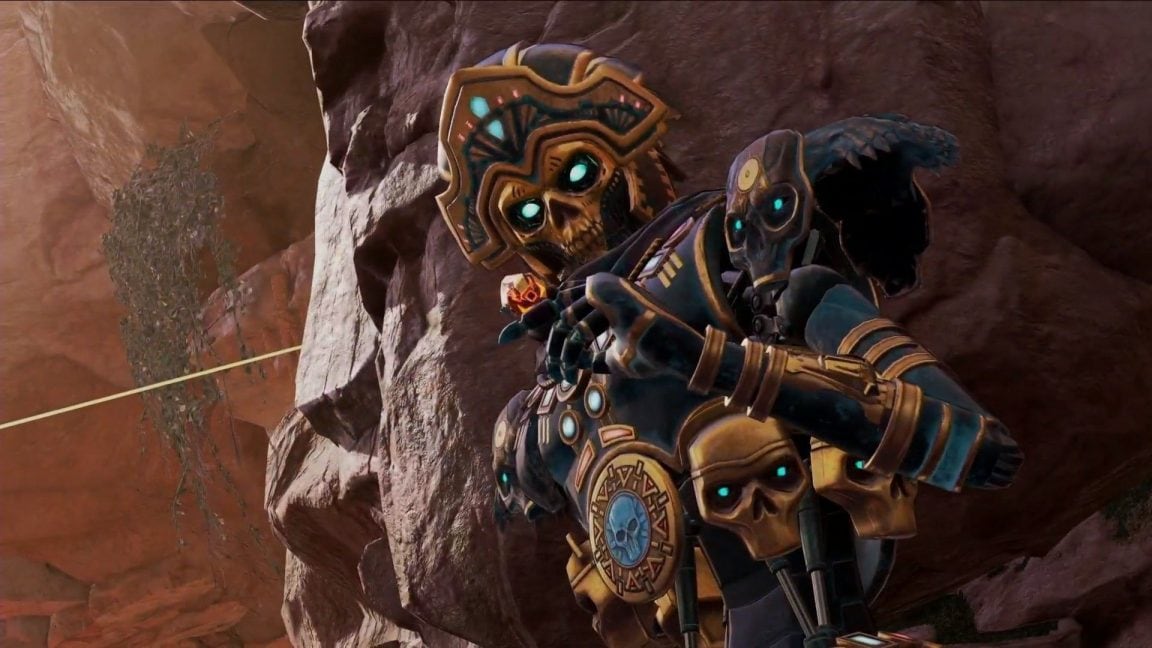 BY ETHAN CASSELL: With EA Play, we got plenty of amazing reveals, as well as some awesome announcements for existing games. Apex in particular has yet another crazy event in store for us coming as soon as June 23rd. A new event titled Lost Treasures will be bringing a handful of new skins, as well as a town takeover from Crypto.

During the trailer, we got a look at some of the new skins to be expected with the new event, and they’re some of the best we’ve seen so far. They like something out of an Indiana Jones movie, Crypto himself even donning a mustache. Pathfinder gets a solid gold body-job, Wraith becomes (what appears to be) a terracotta warrior, and Revenant looks to have been ordained as a sarcophagus head-piece. With all these skins, there also comes a new heirloom for the holographic trickster himself, Mirage. He can be seen in the trailer wielding a miniature trophy of himself, using it to bludgeon Revenant at one point.

As for gameplay changes, we’re seeing two big ones with the addition of a portable respawn beacon, as well as a buff for the combat medic Lifeline. The prior gadget is used to place, you guessed it, a respawn beacon, and call in a teammate from (nearly) anywhere on the battlefield. This will be a powerful tool for players moving forward, enabling safer, more efficient revives. We can assume it’s versatility will be balanced by a carry limit (as seen in the trailer), as well as an increase in the time it takes to manually conduct a respawn. The latter is a massive buff to Lifeline, but also a punch to players who used her revive-shield as a means of instant cover. The buff makes it so that all Lifeline has to do is begin the revive process, then step away and her drone and the down player will do the rest of the work. The balances to this are unknown, but the best guess at this time is that Lifeline may need to stick close to the drone, otherwise it could preemptively end the process.

We also get to catch a glimpse of the new town takeover location in question, Crypto’s Map Room, seen to the West of Repulsor. The area itself seems to be a culmination of Crypto’s abilities, as well as adding the feature of interacting with the bunkers hidden across the map. We see there are data-banners hanging about the area, revealing how many squads there are, as well as having a holographic display of King’s Canyon in the center, assumed to be where you go to open bunkers. This will be an interesting concept, as opening a bunker across the map from you may end up doing more harm than good.

Finally, the big news everyone was waiting for revealed. Crossplay is coming to Apex, spanning PC (via Origin and Steam), Xbox, Playstation 4, and soon to be, the Switch. Crossplay has been a feature the community has begged Respawn for quite a long time now, and it appears that the studio is finally preparing to roll it out. Announcing that such a long-awaited feature was finally coming definitely helped spice up the Apex announcements for the evening.

I’m sure we’ll all be looking forward to this upcoming update, and I personally am fired up for the new mechanics and gadgets.