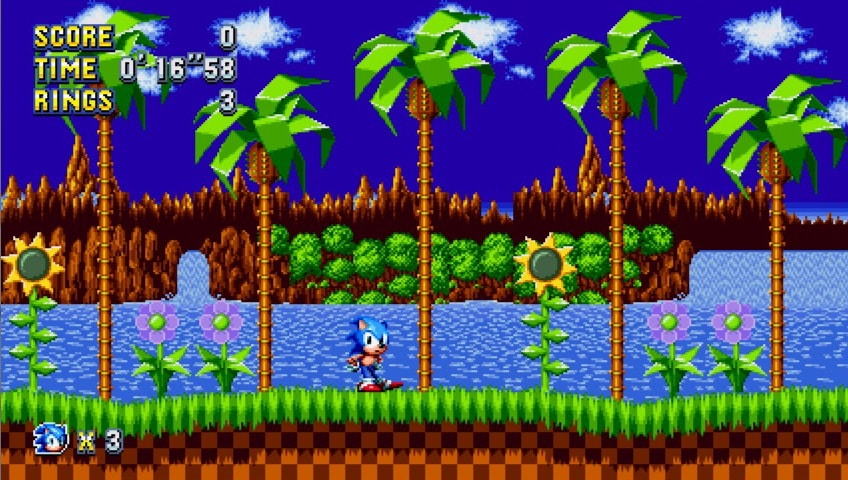 Don't worry Sonic, I won't turn them against you. Even if you sort of suck now.

I know I’m a bit late to the party, but I’ve been thinking about this a lot.

Before I go any further, I have to share this disclaimer: I love Sonic the Hedgehog.

The blue bastard was the first gaming mascot that I bought into, and I’ll never forget the memories Sega gave me back on my Master System 2.  Those were good times…

Seeing Sonic spiral almost into irrelevance has hurt me.  I’m not too big and ugly to shy away from a Twitter argument or two about whether the blue spiky one has a place in the games industry in this day and age, but even I have to admit that all is not good in the Sonic Camp.

Side note: I Google’d Sonic Camp.  Don’t do it.

Sonic Mania is an attempt by fans of the game, certified and backed by Sega, to bring Sonic back to greatness.  They are going back to original formula in a bid to rejuvenate a brand that has repeatedly been watered down by lacklustre, mediocre entries.

My question is, is this right the right thing to do?

I loved Sonic.  I loved Sonic 2.  Heck, I loved a bunch of Sonic games growing up – the addition of Tails and Knuckles as playable characters was awesome – but we have to remember that those games were created at a time where a few megabytes was all game developers had to play with.  Vivid worlds had to be created and condensed to fit into that limited space, which was jaw-dropping at the time.  However, in my opinion, the huge influx of incredible indie games operating within that space in this day and age means that this is no longer the arena it once was.

And, really, should Sonic be operating within the same parameters as indie games?  With Sonic’s massive budget and deep heritage, I argue that it shouldn’t.  Sonic should be pushing boundaries and setting the pace in a much larger and significant way.

Sonic Generations was, by most accounts, a good Sonic game.  That momentum should have been built upon.  While Mario continues to develop its brand with Mario Maker, Mario Kart 904 (okay, it’s not that bad), and so on, Sonic seems to go to back to the beginning over and over to try and find a new spark to shoot it into the top tier once again.

Is Sonic Mania the way forward?  We’ll have to wait and see.

I don’t mean to sound so sceptical.  I truly hope that Sonic Mania is a mind-blowing game that rejuvenates the brand and re-writes the rulebook.