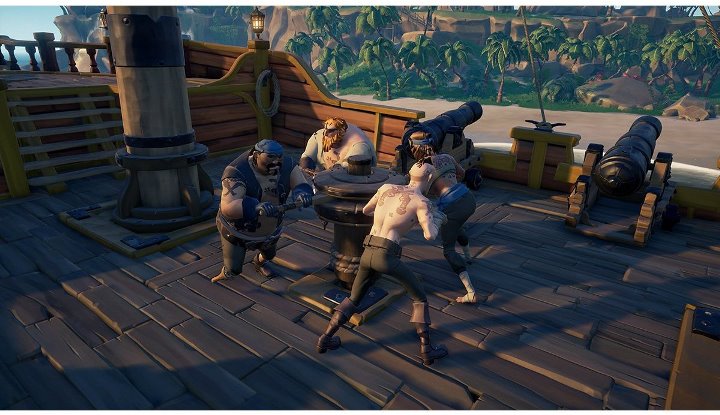 Sea of Thieves players have some exciting things to look forward to in the next month. March 20, 2019, marked the one year anniversary of Sea of Thieves and the developer Rare is about to unleash a mother of an update that will include an actual narrative, competitive multiplayer and much more awesome additions.

From the start, Sea of Thieves was pretty devoid of any real Narrative or quest structure. It was basically menial tasks you and your friends can do to gain gold to buy fancy new swag. But now with the Tall Tales: Shores of Gold update players will be treated to an actual quest that follows a proper narrative, promising a deeper dive in the lore of Sea of Thieves.

The trailer didn’t show much but this news is still exciting nonetheless. A few places around the web are claiming that these quests can indeed be played solo, so those who neglected Sea of Thieves because of its heavy emphasis on multiplayer now have a reason to give the game a go.

The Arena expansion was talked about before but now we know it will be released with the Anniversary update. The Arena will pit you and your fellow pirate friends against others in competitive matches revolving around core aspects of the game. From what I gather, it will include naval combat, races to find treasure, and things along that line.

Have you been playing Sea of Thieves and thought to yourself “man, I would love to harpoon a megalodon and cook its meat”?  Good news!  You will be happy to hear that with this update you will have the ability to fish and cook up meat from various wildlife and monsters you come across.

These sound like small improvements but they will make all the difference.  When your ship is damaged, holes will no longer simply pop up below deck; instead, when taking excessive damage your ship will suffer everything from broken wheels to a broken mast, making sailing even more dangerous.

The aforementioned harpoons will also be able to be used to snatch up treasure from rival ships. New enemies will be introduced further making the sea of thieves more dangerous and exciting than before. This is all besides the previous updates the devs have been making to the core combat in the past couple of months.

If you haven’t already, be sure to check out the Anniversary trailer below along with The Arena trailer as well as the dev diaries that go a little more in-depth on all things Sea Of Thieves

In the coming weeks, Rare will be going more in-depth on each one of these new aspects of the Anniversary Update so be sure to keep an eye out.

Playing Sea of Thieves with friends is truly a magical experience. The world is beautiful, dangerous and nails what it feels like to be a pirate but the absolute lack of any significant single-player content kept me from really devoting any significant amount of time into it. There has been a consistent flow of updates since launch that kept the game fresh and relevant but none as significant as this. Not only does it seem like this will further enhance the multiplayer experience but give us solo players a chance to really dive deep into this amazing world.