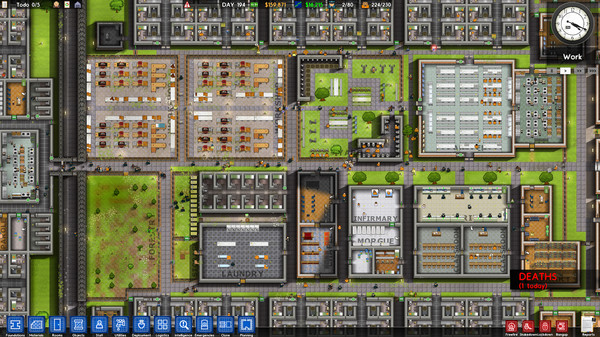 Apparently, I’m not alone, as publisher Paradox Interactive has today announced that Prison Architect has passed the four million player milestone across PC, console, and mobile platforms.  To celebrate, they revealed that they will continue to develop expansions for both PC and console in partnership with Double Eleven, the studio behind the solid console editions of the game.

The first update, titled ‘The Clink’, releases today on PC, the first major update since they bought the rights to Prison Architect earlier this year.

‘The Clink’ improves the prison guards’ ability to thwart escape attempts with a new Tunnel Search functionality, allowing them to search toilets for hidden tunnels.  It’s a dirty job, but someone’s got to do it, right?

There are also a few additional cosmetics and a range of further improvements, including additional Quick Rooms in the Quick Build menu, making it quicker and easier to put the bare bones of a prison structure in place.

If you’re a megalomaniac who has yet to play Prison Architect, this could be the perfect time to jump in.  (To the game, not the toilets.  Leave that to the guards.)