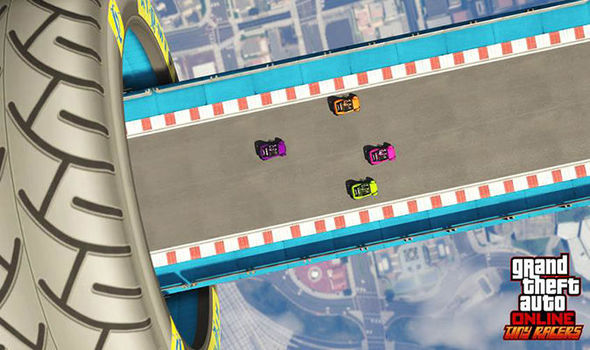 GTA Online received a new game mode this week in the form of Tiny Racers.  They pay’s great.  The mode isn’t.

Visually, the Tiny Racers mode looks great.  The tracks are large and the birds-eye camera is high, making the vehicles feel, well, tiny.  Power-ups are placed around the race tracks, allowing players to equip missiles and machine guns, or even to change form completely into another vehicle.

The issues start when you grab a controller.  The car physics feel slightly off from a top-down perspective – it isn’t as enjoyable as Micro Machines, which employs a far more arcadey physics set.

Disappointingly, racing to a finishing line isn’t on the agenda either.  Rather than doing loops around a track in an effort to being first on the podium in the traditional sense has been discarded.  In Tiny Racers, the player in first place must try to outrun the opposition, with a circle appearing when they have put enough tarmac between them and the other cars.  Any cars who cannot catch-up to get within the circle within a time limit explode.  This process repeats until a player has won 5 races, earning 5 points.

While I’d rather have controlled some tiny vehicles around a large race track doing a handful of laps, the new mode at least feels a bit different.

To introduce the mode, Tiny Racers pays out double RP and cash for the next week, along with a $425k “tax rebate” to supplement their funds.  Can’t be mad at that.

Have you played Tiny Racers?  What did you think?