Abandon Ship released in Early Access on February 21st, 2018 on the PC platform Steam. It is a tactical fantasy warship game being developed by Fireblade Software. The game takes place during the “Age of Sail” were naval warfare was dominated by sailing ships.


You take on the role of a captain sailing a ship through a procedurally generated world, as you take on quests and engage ships in tactical combat similar to FTL (Faster Than Light). You will face random events and sea monsters as you explore the map in real time. But be wary, as death is permanent and if the captain dies the game is over. Though unlike other roguelikes, your life isn’t tied to the ship. If it goes down, you have a chance to survive and climb your way back to the sea.

Abandon Ship wasn’t what I thought it to be. I got to preview the game in pre-release before it became available to purchase in early access. I thought I was going to play an adventure exploration naval ship game. But boy was I surprised when it turned out to be nothing like that what I had in my head. The developers advertise this game as an adventure exploration game, but I wasn’t expecting it to be a roguelike with permanent death. In my mind, I thought I was going to create a captain avatar and explore the open seas doing quests and fighting other ships. 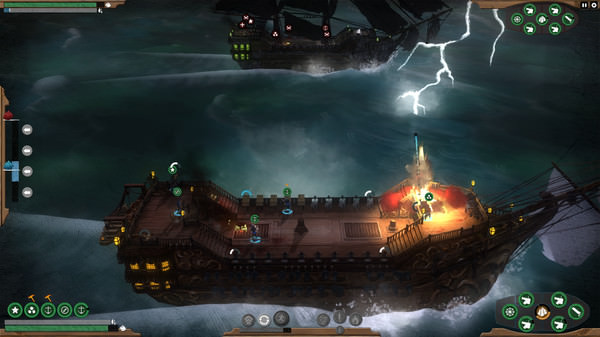 In reality, Abandon Ship plays very similar to FTL. The game starts off with a cult worshipping a sea creature that looks like a Kraken. You play as one of the cult members whom, for some reason, realize that the cult is a sham and must escape it. The story is presented to you in window screens that look like paper and you have a few choices to make. Most of the time you will just hit continue after reading what happens. As you make your escape you can unlock the cells holding some crew captured by the cult. I believe there are like five people to chose from, but you can only pick three. These men will be your crew as you steal a boat and make a run for it. Each of these men has skills in five different areas. Navigating, Firing Canons, Repair of the ship, Crew healing, and Melee Combat. Chose wisely, as you will have to use these guys till you find a port later in the tutorial. The tutorial shows you how to play the game in both exploring the seas and combat when you engage other ships. Once you are done with the tutorial, you are free to explore the seas and continue your adventure.

Most of the game in Abandon Ship is exploring the open seas finding random events. The seas you explore are little-boxed sections that look like an oil painting. As you explore the canvas is removed and the beautiful environment is revealed (Think Fog of War in an RTS). As you are revealing the canvas little icons sometimes show up. These are the random events. They can be anywhere from helping out other ships, getting attacked by pirates, attacked by sea creatures, finding supplies, and helping men lost at sea. In order to explore the next section, which is blocked off by gates, you have to do a set number of these random events to open the gates. This is one of the areas I find the most disappointing with Abandon Ship. Exploring the little-boxed oil painting gets boring. Yes, you have control over your ship and can reveal the painting as you wish, but the icons are just random events that do little more than just present you with that windowed screen that looks like paper, give you a few options to chose from and present you with a random result. Also in some sections, you can find ports of call. These are where you can repair your ship’s damage, upgrade your ship, replace your crew, buy supplies, and increase your men’s moral.

You quickly find out that gameplay in Abandon Ship consists of finding random events, going to port, getting hunt down by the cult, reaching story driven sections, and fighting other ships till you either destroy the cult or die. I could almost live with this, but the fact that death is permanent you have to do the same sections all over again. The game doesn’t really open up till you get to face the Kraken. So far I have only made it past facing him once, as I have died far too many times from the random RNG events and combat.

Speaking of the ship-to-ship combat, you will always only fight one ship at a time. Even if the papered window screen states there are more ships. This is where the game really shines and is the most exciting to me. You will always start combat facing the left side of your ship (or port side of the ship), but sometimes a random event could start you on your right side (or starboard) of your ship. If you prefer starboard, as long as one of your crew has the navigating skill, you can perform a manoeuvre to turn your ship around. This manoeuvre, like a few others, can only be performed once, then the bar has to fill up over time before you can use it again. The other manoeuvres are Escape Combat and Ram. Escape should only be used if you feel you are going to lose the fight and don’t want to lose your ship, as you will gain no supplies if you run away. Ramming the enemy ship is an interesting one. If you use it at the right time, not only can you damage your enemy’s ship greatly, you could throw an enemy crew member overboard. But be careful using this manoeuvre, as some ships have metal spikes that can cause damage back to you if you use Ram. 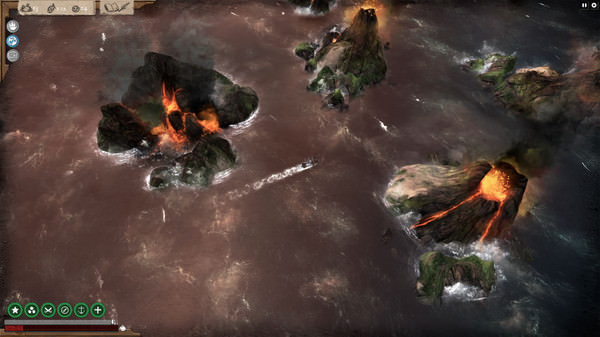 As far as I could tell you can only have a total of six crewmen on your ship. You can move around your crew while in combat to station them at weapons, fix areas of the ship that are damaged by combat, or fight in melee combat. In order to use the three manoeuvres, you must have crewmen at the helm at all times. That will leave five other crewmen to man the cannons, mortar, melee combat, and repairs. Cannons can be used to damage the enemy ship and slow them down. The mortar can be used to damage the enemy crew and hull of the ship. If you are able to damage their sails enough and get in range you can perform the Ram manoeuvre to try and knock some crew overboard and even board the enemy ship and fight them hand-to-hand. Ship-to-Ship combat is complete once the enemy ship or your ship goes down or the crew is all dead. The only other way combat is over, is if you or the enemy escape. I must admit, there is a great sense of satisfaction as the enemy’s ship goes down.

Abandon Ship is in Early Access, but surprisingly is in pretty good shape. Though I will admit it needs some work, as the balancing with the RNG can be horrible at times and hopefully they can add more to the exploration part of the game. Just sailing around finding icons to only be presented with a window screen with little to no interaction gets boring pretty quick. The tactical ship-to-ship combat is, of course, the main draw in this game, but the game could be so much more.

I can’t wait to see this game grow while in Early Access. I hope to return to it again in the future as the developers continue to update the game. But for now, if you would like to support Abandon Ship and try it out your self, it is on Steam for $19.99.