When it comes to Nintendo Christmas present ideas, I could recommend a Nintendo Switch and be done with it, but no.  That would be too easy.

Nintendo has so many properties that have each garnered their own loyal following (including the Legend of Zelda, which has a plethora of awesome gifts that we have already written about), that it isn’t difficult to find interesting and custom-made presents featuring them for the gamers in your life.

These are the best gifts for the Nintendo fan in your life.

These were crazy expensive – Nintendo Switch kind of expensive.  But, hear me out!

For one, these two pictures look incredible: 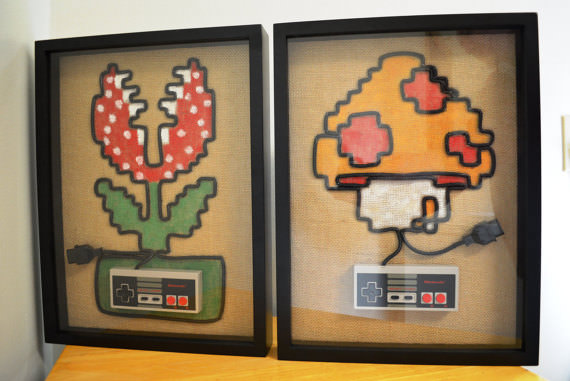 These handmade art pieces feature 2 real Nintendo NES controllers and cords. The cords have been shaped, twisted, and turned to create the shapes of the Mario Mushroom and Piranha Plant. The backgrounds were then painted, to really make them pop.

They look homemade and unique, which would make them fit in other locations than just beside your gaming set up (though, that is exactly where I’d be putting mine).

I’m a huge N64 fan, so much so that I recently re-bought some original N64 controllers to display with my gaming set up (and not to use with emulators and a USB interface, because that would be wrong…okay, so that too).

But, these N64 controllers look incredible: 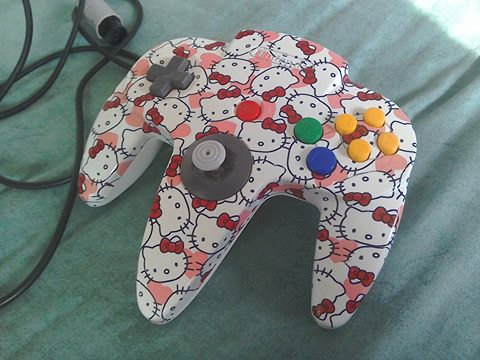 The only two designs that I could find of this quality were Hello Kitty and American License plates, but if you could track down someone who would put a Mario design on them, you’d have the ultimate N64 controllers.

Just to mention, the controllers are authentic, fully functional N64 controllers.  they are are bound to turn heads at any retro gaming party.

These canvases are perfect for any gamer set up. You can choose your own custom colours, styles, drips, no drips or any other specifications. Look at these beauties: 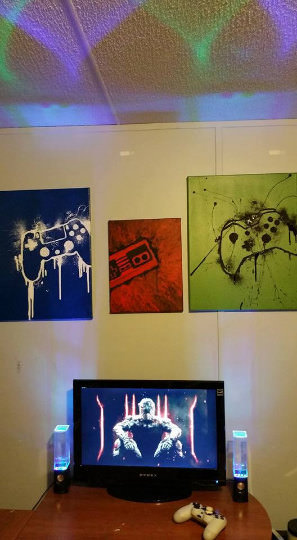 You could have a NES, SNES, N64, Wii, Gamecube controller…whatever you like. And, if the Nintendo fan in your life isn’t Nintendo exclusive, you could mix it up and get controllers from their other favourite consoles too. That’s a win!

This is an original UK SNES, Super Nintendo Entertainment System, but fear not! It was totally dead and has been given a new lease of life – no functional consoles were broken to make this possible. And it looks fully legit. 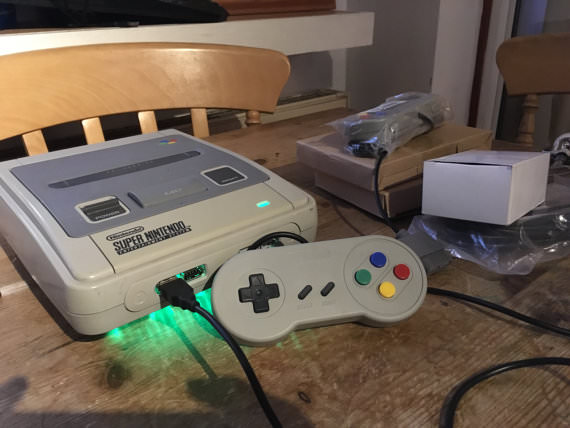 All internals have been removed, recycled and replaced with the latest Raspberry Pi3 (with retro pie installed), plus a USB Hub, micro-power USB extender, and HDMI Extender in place to allow the use of the existing ports.

The following are also included in the bundle that I found:

Wi-Fi & Bluetooth are built-in. The ports have been replaced with HDMI and Micro USB to the rear and dual USB’s at the front, internal multi-coloured LEDs also built-in. It features all major emulators and Kodi, all configured.  Just plugin and play.

These four coasters include the Power-up Mushroom, Invincibility Star, Fire-Flower and the, uh, mysterious Mystery Box. 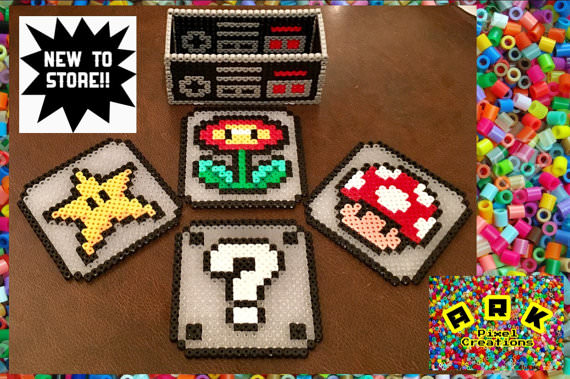 What really sets this set off is the controller box, which the coasters stack into. It would look awesome next to a games collection.

This Luigi Ouija board looks strangely classy, don’t you think? 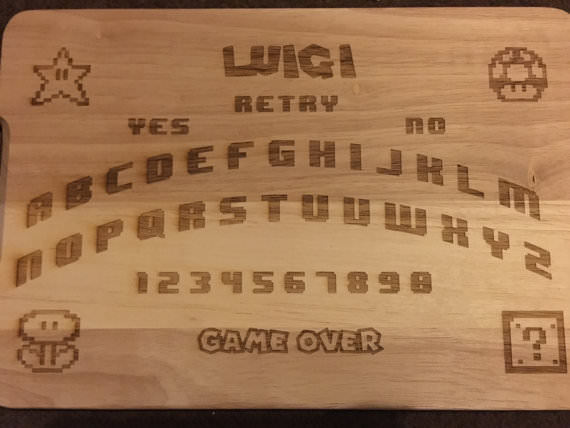 Admittedly, I’m not sure if I’d actually use this to cut onions; I’d be more likely to use it as a plaque over my retrogaming collection, but that’s just me. 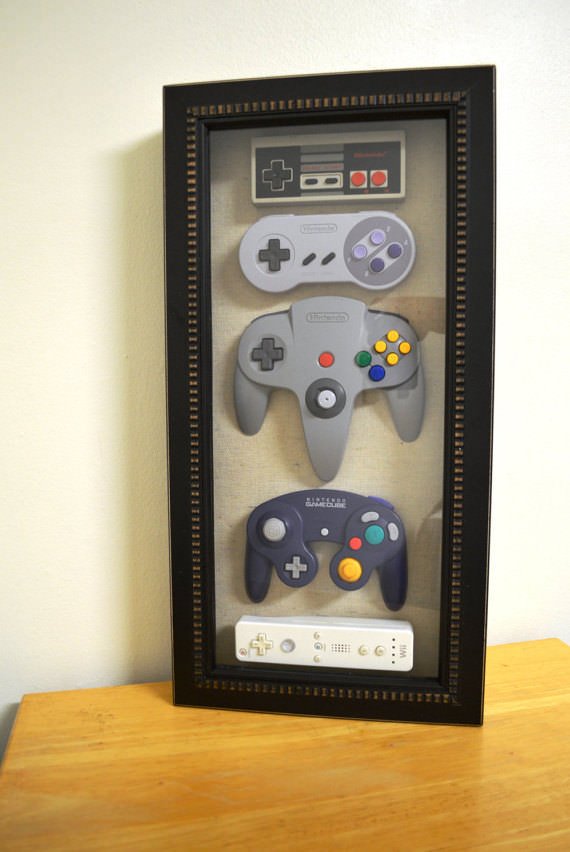 All the controllers are authentic and have been nicely mounted in chronological order from top to bottom. What is really fun about this piece is that the box has a door in the front which can easily be opened allowing the viewer to touch each controller. The door then snaps shut very securely with 2 powerful magnets. The buttons on all of the controllers can be pressed like normal, and the analogue thumb sticks move freely.

Relive those golden years of video gaming while sprucing up any room at the same time.

This is a highly unique sculpture lamp made with a Nintendo NES controller and Zapper gun. It looks amazing! 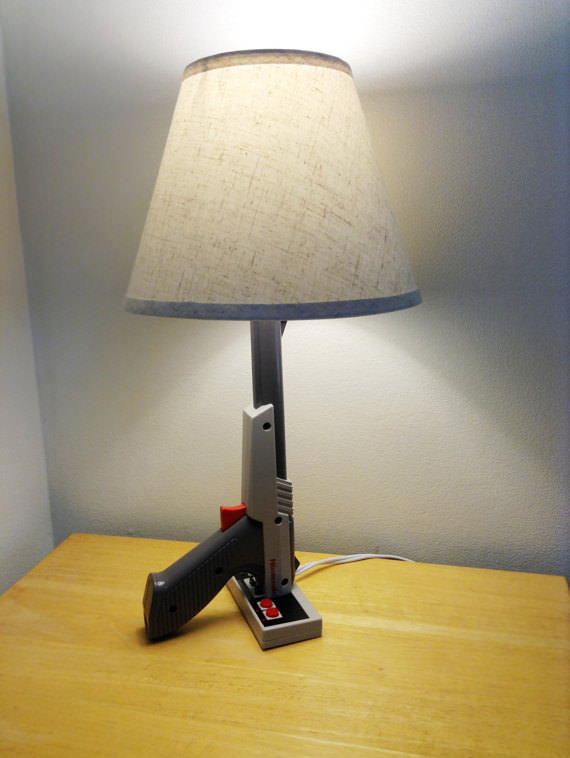 The Zapper gun is securely mounted to the controller which makes for a perfect base to the lamp and the gun handle adds extra stability. It’s a very sleek and sturdy design and will not tip over easily.

This is a fitting tribute to the golden age of NES. These two relics now function to illuminate your room and your vintage gaming memory.

This piece of art is printed on super premium high-grade glossy card stock many times over, and then painstakingly precision hand-cut and layered many times to create the eye-popping 3D effect. It really feels like the art work is jumping right out of the frame. 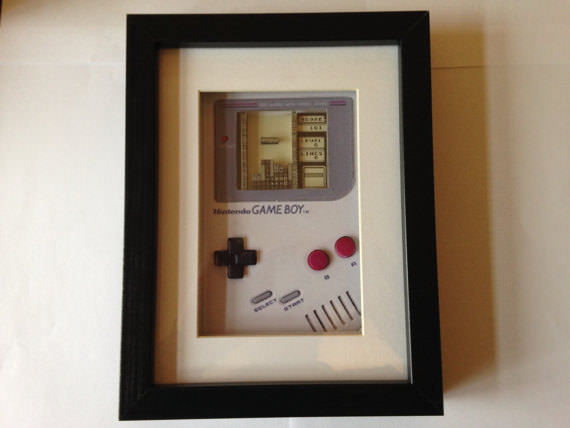 I personally love 3D artwork (my favourite is in the Zelda gifts I previously listed); they just bring the games to life, and this Game Boy with Tetris is no different.

Are you a Nintendo fan? If so, which of these gifts (except the Switch, obviously) would you love to have sitting under the tree on Christmas day?  Let us know on Twitter!