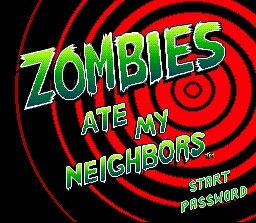 BY PJ RAWSON: Like many veteran gamers this past year, I travelled down the nostalgic road to childhood favorites. For me that meant dusting off old consoles, and diving through cardboard boxes looking for cartridge games. Emulators are convenient, but I enjoy dealing with all the quirks of these classic systems. I still ritually clean the game cartridge before putting it in the console.

The choice of which game to play first is always the same: Zombies Ate My Neighbors. 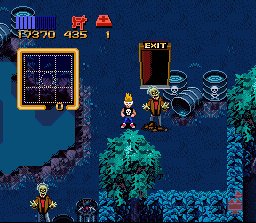 Zombies are still a benchmark for horror in video games, and today’s graphics have certainly increased the scare factor. Zombies Ate My Neighbors, however, is not intrinsically frightening, but its challenging gameplay has always kept me on the edge of my seat. The game was first released in 1993 for the Super NES and the Sega Mega Drive/Genesis. It was developed by LucasArts and published by Konami, and while it didn’t seem to sell as well as other titles at that time, it was far from a bust.

The moment I turn on the game I remember why I loved it so much as a kid. The spiralling start screen and eerie theme music still gives me goosebumps. You get a choice between two characters: a punk kid named Zeke, wearing a skull t-shirt and 3-D glasses; or a dark-haired teenage tomboy named Julie. Classic 90’s. 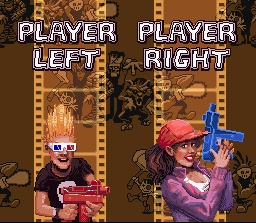 An arcade-style run and gun kind of game, Zombies Ate My Neighbors has excellent game mechanics and even allows for co-op. As you start out on level one, you find yourself surrounded by, you guessed it, zombies.

The object of the game is to save as many victims as possible, there are ten to start. Each type of victim is worth a different number of points that adds to your total score. When an enemy touches a victim they are killed, reducing the total number of victims for the next level by one. My favorite victim is the grouchy teacher holding a piece of paper with “F-“ on it. With forty-eight levels and seven bonus levels this game has given me hours of teeth grinding suspense as I try to survive. 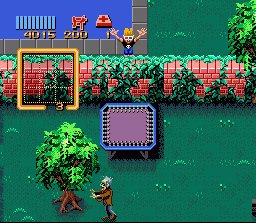 Monsters like werewolves, evil dolls, and chainsaw-wielding psychos keep the game from getting stale, and a variety of weapons lets you fight them off. The main weapon is a rapid-firing water gun which serves as an excellent all-around means to dispatching bad guys. Weed whackers, bazookas, exploding soda cans, and golden crosses are some of the other weapons that can be obtained. Supplementary equipment such as health kits, inflatable clowns, and potions will also help you succeed.

While completing the game is a fulfilling task in of itself, players can find other challenges on their own. On some levels, haste is important to save all the victims, while on others, careful planning is required. Completionists will have fun getting to all the bonus levels and hardcore players who want a real challenge can start near the very end at level forty-five, with nothing but their water gun and one health kit. 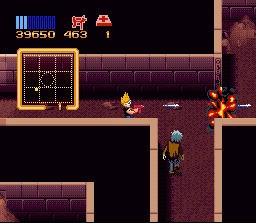 Despite the fact that little notice was given to the game after its release, it has since developed a strong following. Sometimes referred to a cult classic, its creepy music and detailed graphics (for 16 bit) has many players coming back for more rounds of good ole fashion zombie bashing. Either going at it solo or teaming up with a friend, Zombies Ate My Neighbors is a must-play classic and definitely qualifies as my childhood favorite.